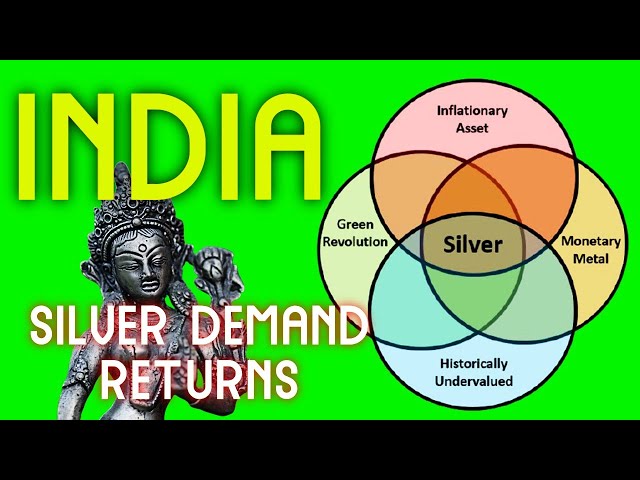 Silver Demand Forecast is at Six-Year High Levels, But Wait...

Silver bullion bulls who pay attention to the fundamental physical drivers of the spot silver price market have been waiting for some time now for one of the world's largest silver bullion demand markets to awaken from its pandemic slumber.

The nation of India, which averaged annually over +171 million ounces of silver bullion demand throughout the 2010s, has been all but gone since the pandemic hit the global economy in early 2020.

Well, that has now changed, with India having taken over 50 million ounces of silver bullion imports recently in September and October 2021 combined. October 2021 reached close to 1,000 metric tonnes of silver imports.

Remember how gold-silver bull markets typically operate for the so-called poor man's gold called silver. Often the climbing price of gold gets so high and costly that would-be buyers switch their preference to cheaper silver bullion buying as it offers many of the same attributes but at a better value.

This action in the aggregate kicks off the outperformance of silver versus still well-performing gold values and typically tightens the historic gold-silver ratio towards longer-term lower levels.

India has only just returned to their former $Silver #Bullion import demand levels, so basically all these recent few yrs of record and near-record #Silver investment demand has been western-only driven

What if India needs to catch up on supplies?!

This week, the Silver Institute made headlines, forecasting that silver investment demand is now at six-year high levels and climbing. They failed to mention what will happen if India keeps up its torrid silver bullion importing pace.

We will further examine that silver supply-demand report a bit later in this week's update.

The silver and gold markets had a slightly down week of gold silver spot price trading action.

The gold-silver ratio is now back up to 75.

Today at US President Joe Biden was getting a routine health check-up. The power of the Executive office was briefly transferred to Vice President Kamala Harris, marking her as the first female with Presidential power in the nation's history. In this week’s report, we look back a few weeks ago, trying to explain away the massive price inflation US citizens are now suffering under.

Not only in the USA are we seeing massive inflationary data prints. In Germany, their producer prices have now risen 18.4% over the past two October prints, a level of inflationary gap up not since seen in almost 60 years.

The devaluing fiat Turkish lira has made a lot of headlines recently as Professor Steve hanks have their annualized inflation rate at 46.58%, meaning that their fiat currency's purchasing power is halving on an annualized basis.

Recall that in the middle of 2008, the fiat Turkish lira was almost at par with the fiat Federal Reserve note or the so-called fiat US dollar.

Those in Turkey who held prudent physical bullion allocations since have not only protected their hard-earned savings, they have also been able to buy local goods and services at severe discounts since the first global financial crisis kicked off in 2008.

The Silver Institute estimated this week that global silver demand would be over one billion ounces for this year 2021, up over 15% since the slow pandemic hit 2020.

They note that physical silver investment demand should hit around 263 million ounces this year, while India has mostly been away from the market.

They also note that unsecured silver exchange-traded funds are forecast to see an additional 150 million ounces of silver added this year. As a result, combined holdings will have risen a dramatic 564 million ounces over the past three years.

When I see unsecured underperforming derivative bag hodling $SLV used as a proxy for the $SI $SI_f driven spot $silver price I think of this classic,

"We can't keep up with #SilverSqueeze demand"

We are again closing in on the record high level for silver ETF reached back at the start of the Wall Street Silver Squeeze movement in early February 2021. Back then, Metals Focus admitted that the seemingly lawless City of London was almost entirely out of silver bullion float in their collective unsecured silver warehouses.

With India returning in earnest to the silver bullion demand fray and the four major contributing factors driving silver demand the world over, it is hard not to see silver as perhaps the most asymmetric bet of this decade going forward at these historically undervalued spot price levels.

Gold priced below two thousand fiat Federal Reserve notes per troy ounce will prove to be a solid long-term value as the central banks use currency debasement as their main exit plans.

Sleep on it if you like, but like Soros said, $Gold is the final bubble of this debt super-cycle pic.twitter.com/BAAsJwUvze

This world is likely sleepwalking into a crisis of fiat currency confidence which should drive heavy momentum, and safe haven capital flows into the physical and derivative precious metals complex to come. Most investors do not know how little precious metals allocations the wealthiest hundreds of thousands of estates (fiat billionaires and +$50 millionaires have yet).

What happens when megawealthy estates freak out and move into hard bullion allocations?

A few days ago, I sat down with David Morgan of TheMorganReport.com to talk with him about this classic 10 Rules for Silver Investing.

It was a 44-minute discussion of basic guidelines for being a successful long-term silver bullion and silver mining share investor. It has insights for both new and veteran silver investors, which should add value to anyone who takes the time to watch it.