Silver Crashes By Almost 20% In 24 Hours

There is nothing normal about the markets this year.

We had a historic stock market crash followed by an equally historic stock market rally, we have the Fed intervening on an unprecedented scale to keep assets of their own choosing continuously bid, we have exploding debt and deficits with interest rates at record lows, and who could forget negative forty bucks for a barrel of crude oil?

Indeed, this year has been anything but normal in the markets.

So is it really a surprise that when gold & silver finally get their pullbacks after such spectacular rallies, that the pullbacks are more like corrections, and, quite frankly, bordering on flat out crashes?

Silver's paper "sell-off" was so massive that price fell nearly 20% in 24 hours: 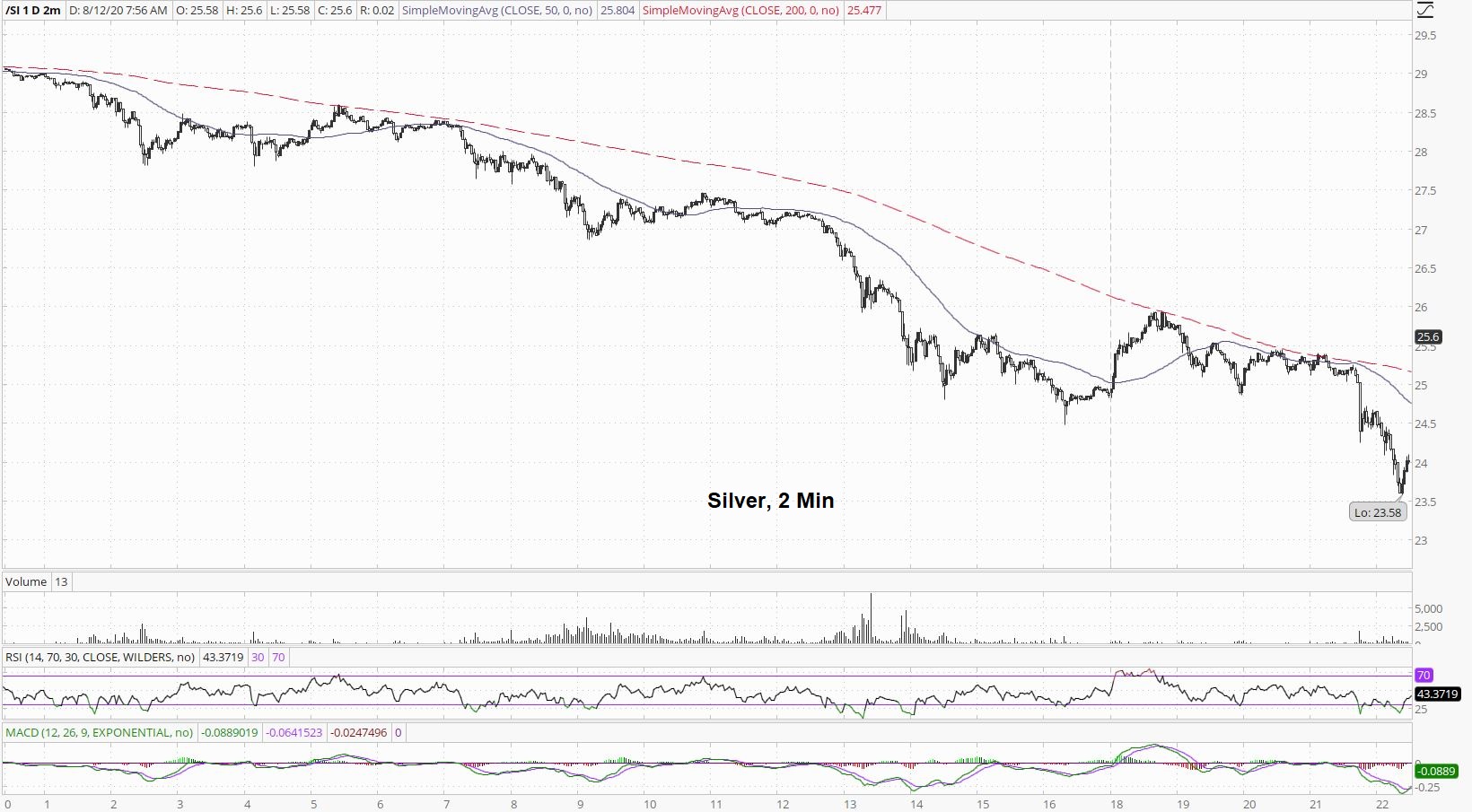 In my opinion, that's one heck of a flash sale, especially considering the elevated premiums we've all had to pay lately!

Here's the question: What has changed since last week that would have the precious metals selling-off so violently?

Nothing has changed, fundamentally speaking, that would have the precious metals sell-off so violently. We have a Fed that is committed to suppressing interest rates, propping up financial markets and letting inflation run hot, we have Main Street dealing with difficult pandemic lockdowns & shutdowns, civil unrest or worse, we have the US Federal Government borrowing and deficit spending at an increasing rate, and, arguably, the geopolitical situation in general, and especially between the US and China, is deteriorating as tensions escalate.

Technically speaking, sure, many analysts were saying that gold & silver were extremely "overbought" and that sentiment was "too bullish" or "overly optimistic", but we must remember that those same analysts are talking more about paper gold & paper silver, as in, the futures market, which still has much influence on the price of real, physical gold & silver in-hand. So the paper price experienced a violent correction, yes, but that does not mean that gold & silver bullion are not bid.

One quick search for "1-ounce generic silver rounds" tells you that. 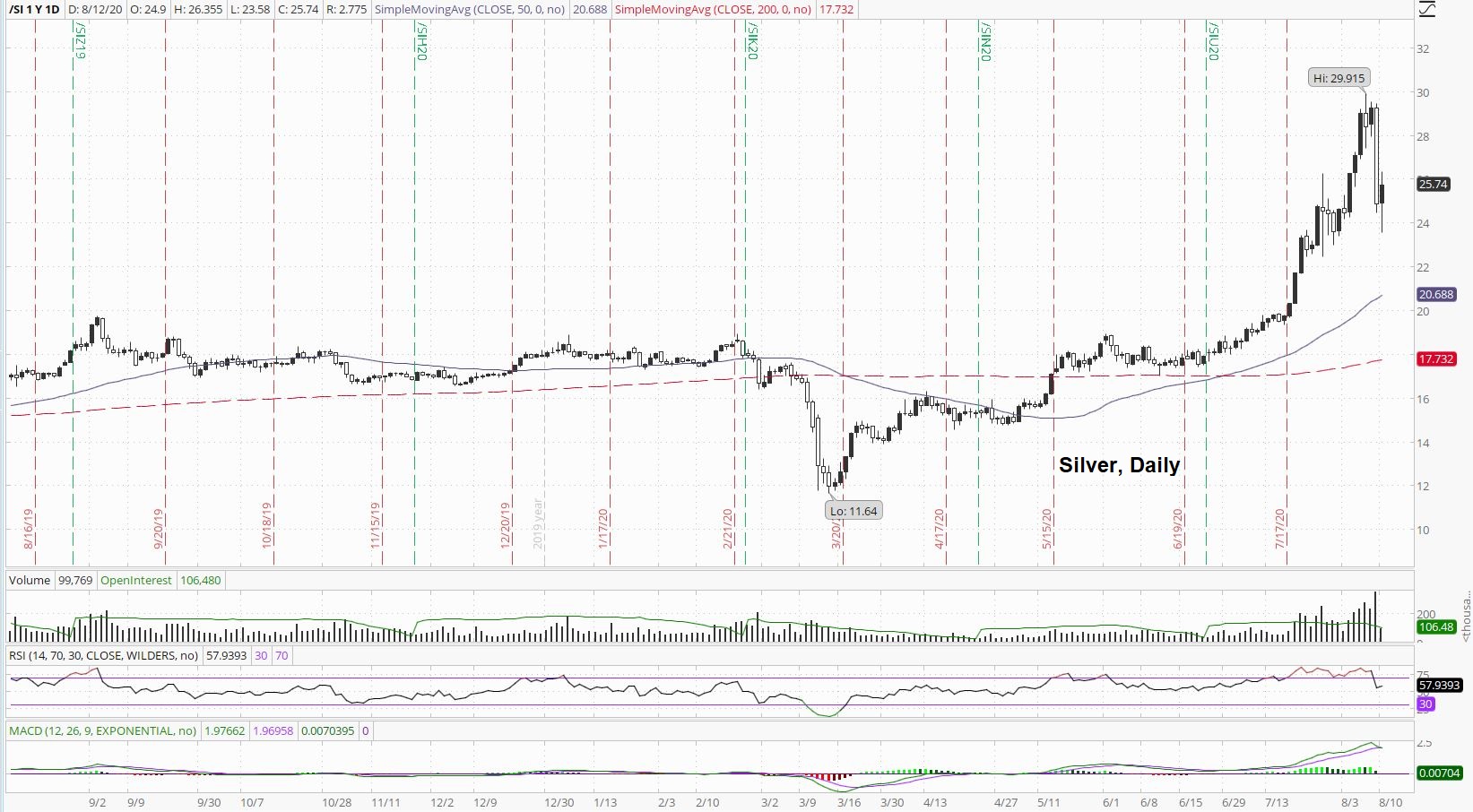 But that's only if a person is betting in the paper markets, because to the stacker and other smart investors out there, that drop is a welcomed dip.

Greasham's Law is, after all, in my opinion, playing out in front of our very eyes with even the clad, base metal stuff:

So if I can get more good money (gold & silver) with the same or less bad money (unbacked, debt-based fiat Federal Reserve Notes dependent on unsustainable, exponential growth), that's music to my ears! 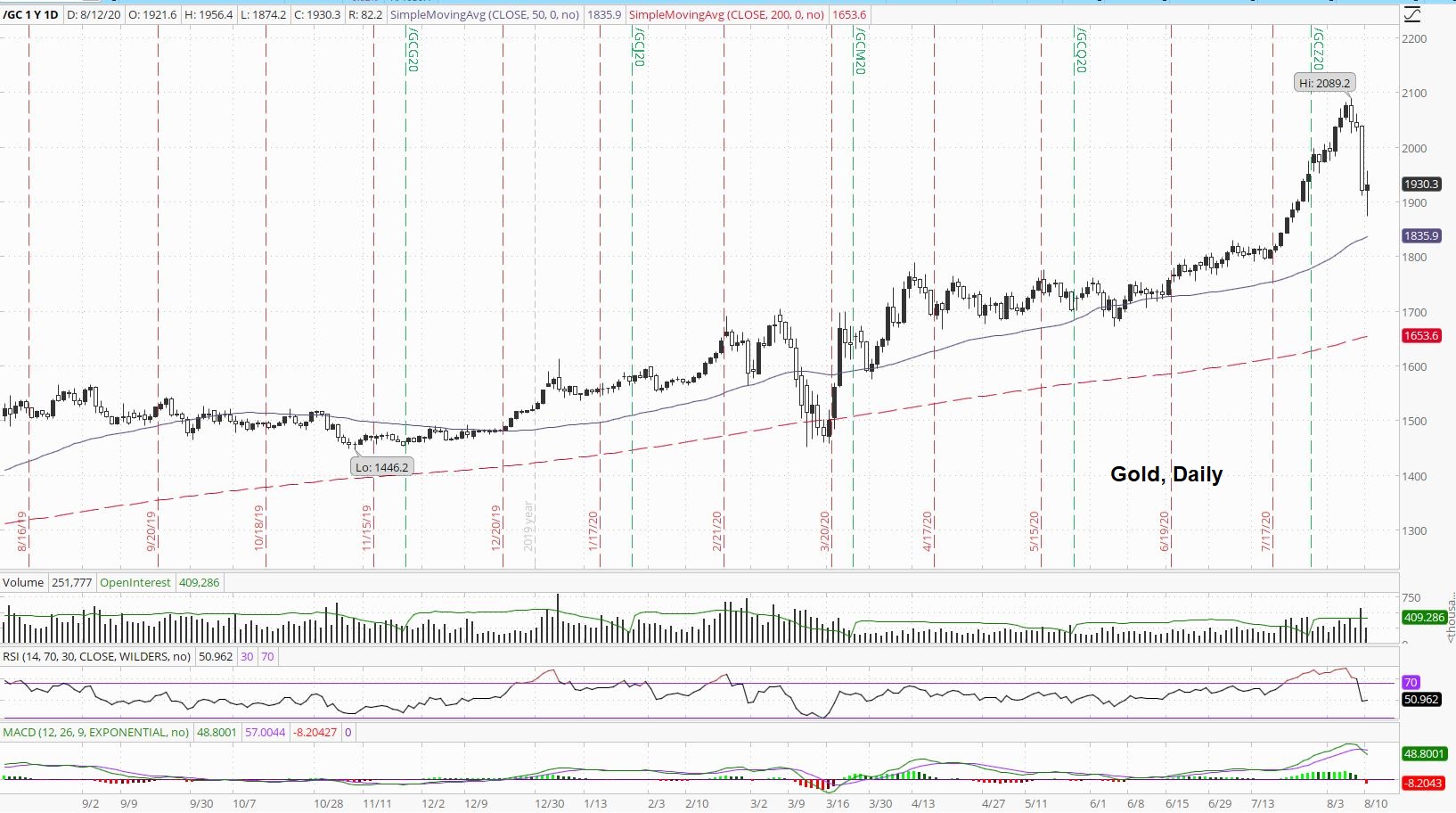 Silver has outperformed gold to the downside, as reflected in the rising paper Gold-to-Silver Ratio: 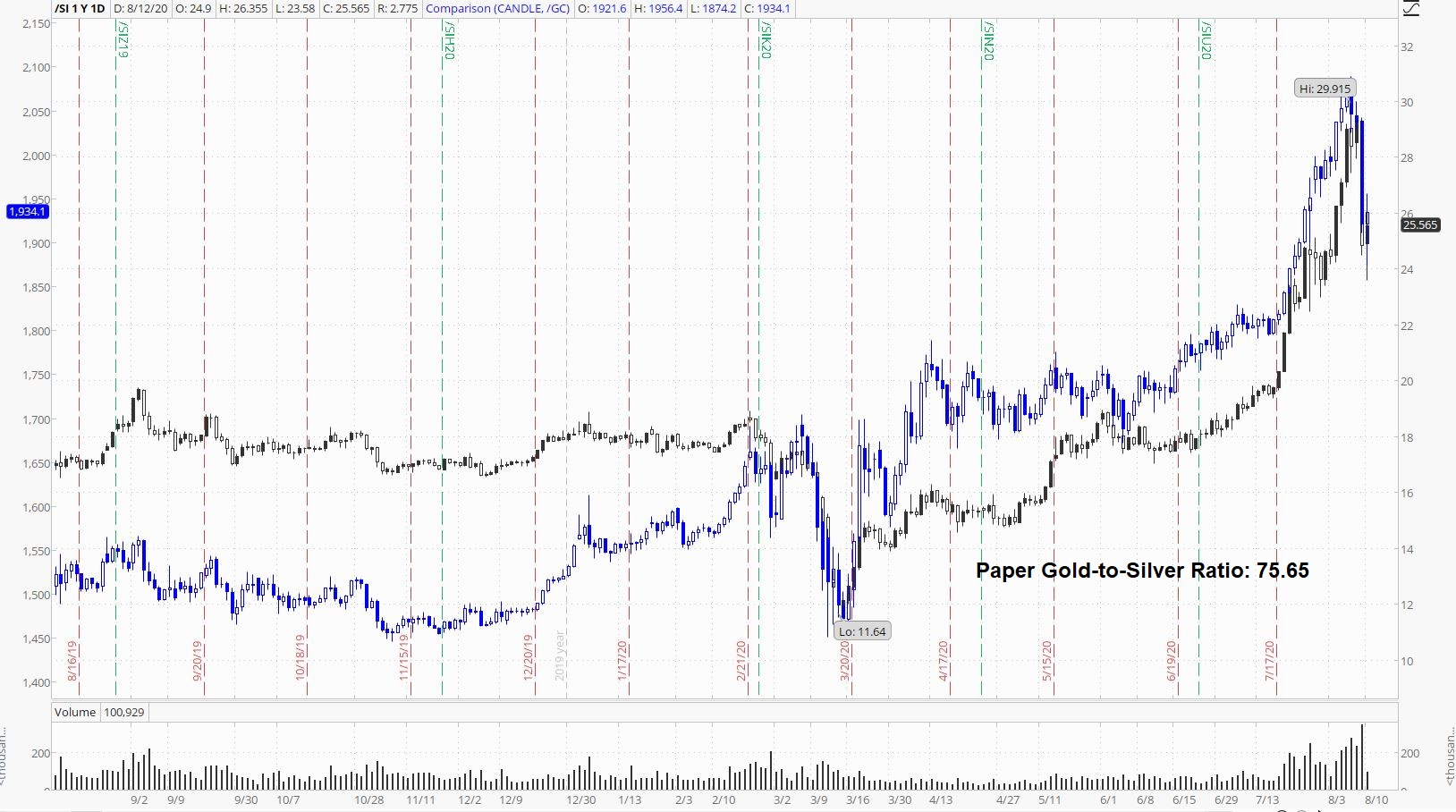 This falls in line with past and current expectations.

Palladium's put in a lower-high: 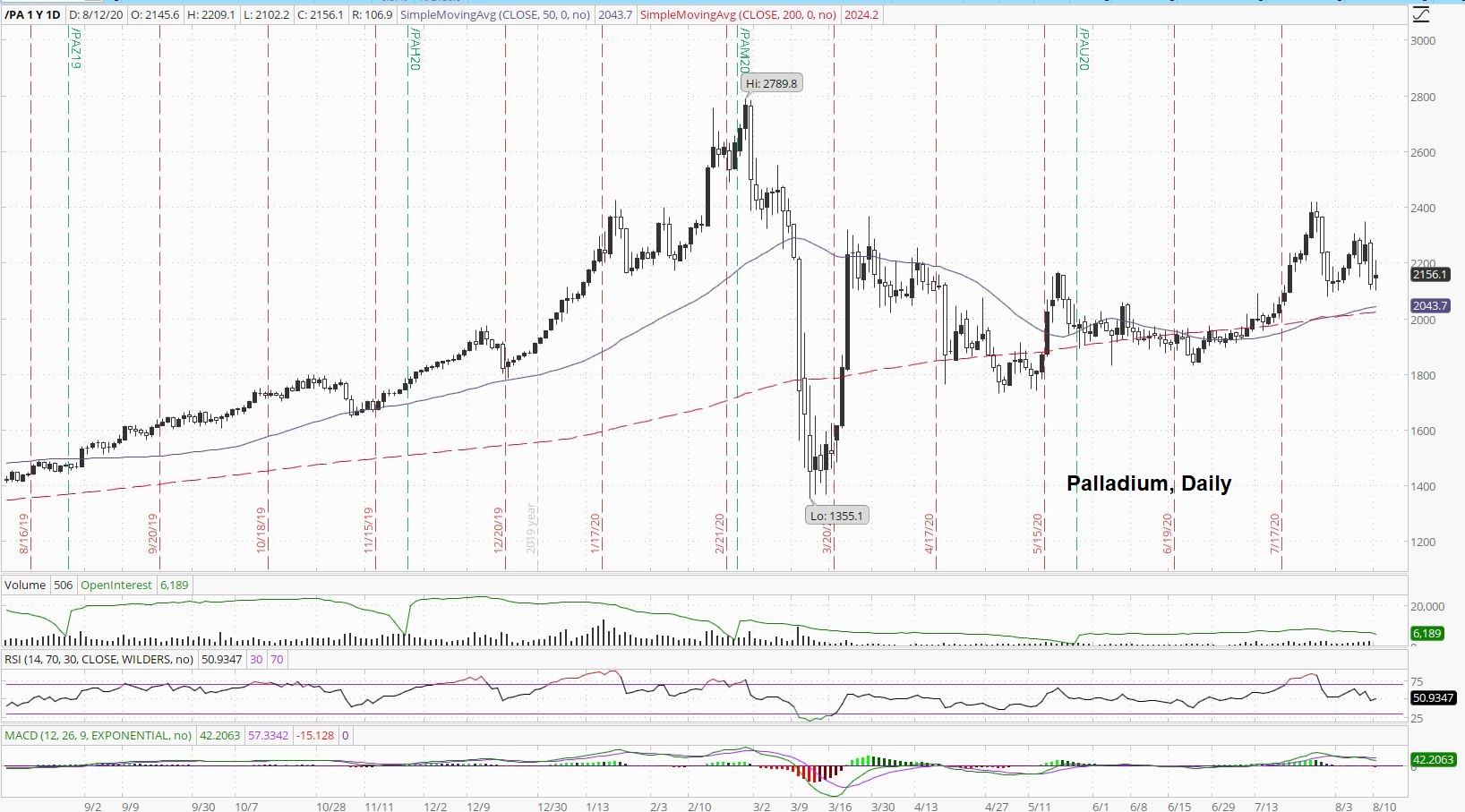 One lower-high does not make a new trend.

A series of lower-highs and lower-lows would make a bearish trend, however, so for now, while the trend remains up, and although palladium didn't get clobbered quite like gold & silver did, I will be looking to see if we put in that first lower-low on the daily chart.

Even platinum's trend remains up: 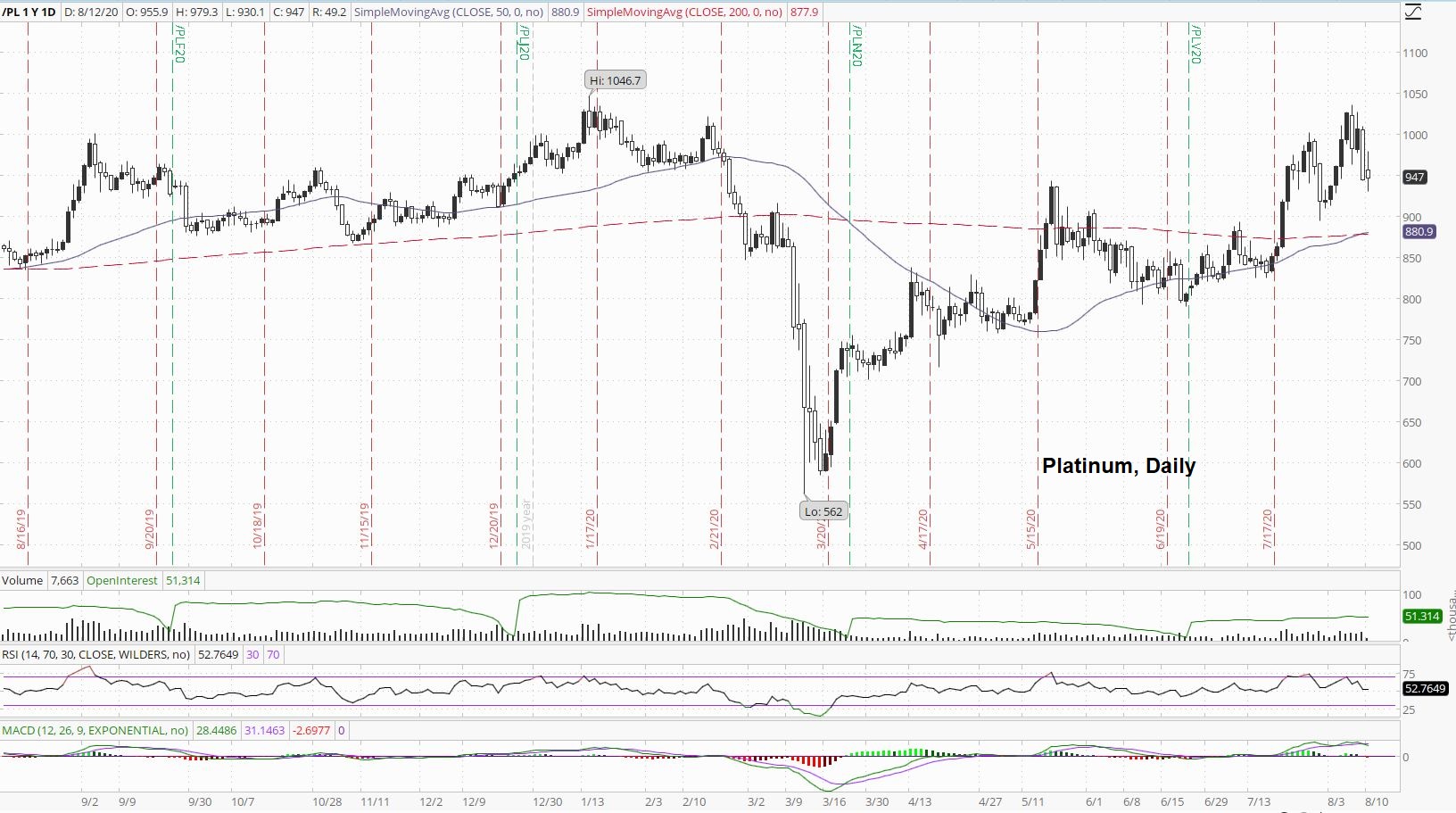 Although we've slipped back into negative, year-to-date.

Copper could have some support at $2.80: 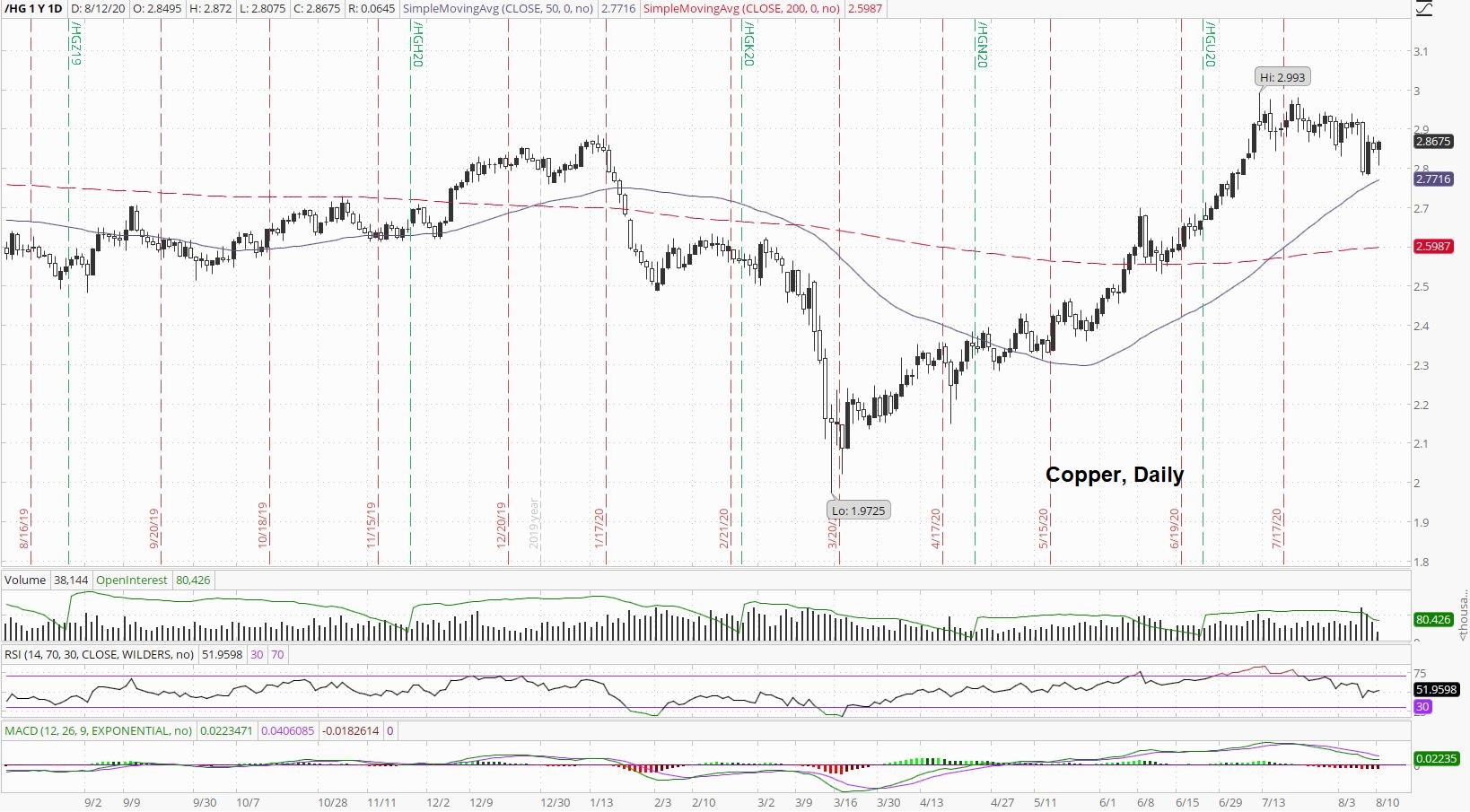 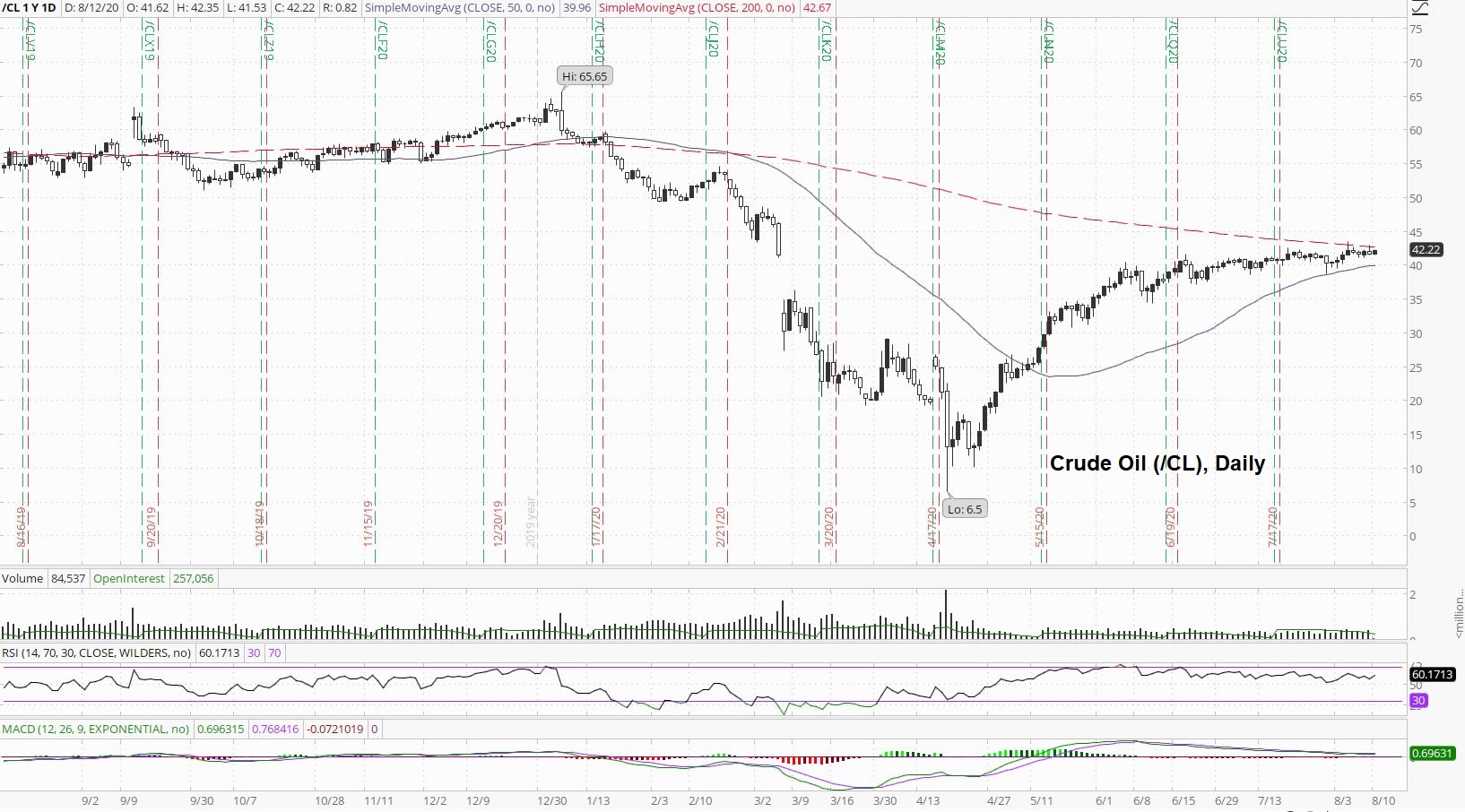 One might wonder why no "fear premium" kicked-in to the price of crude oil after the horrible Beirut Blast last week, however, the mainstream narrative is that the explosion was not a geopolitical incident or attack, but rather, the result of internal problems stemming from corruption, negligence and more. 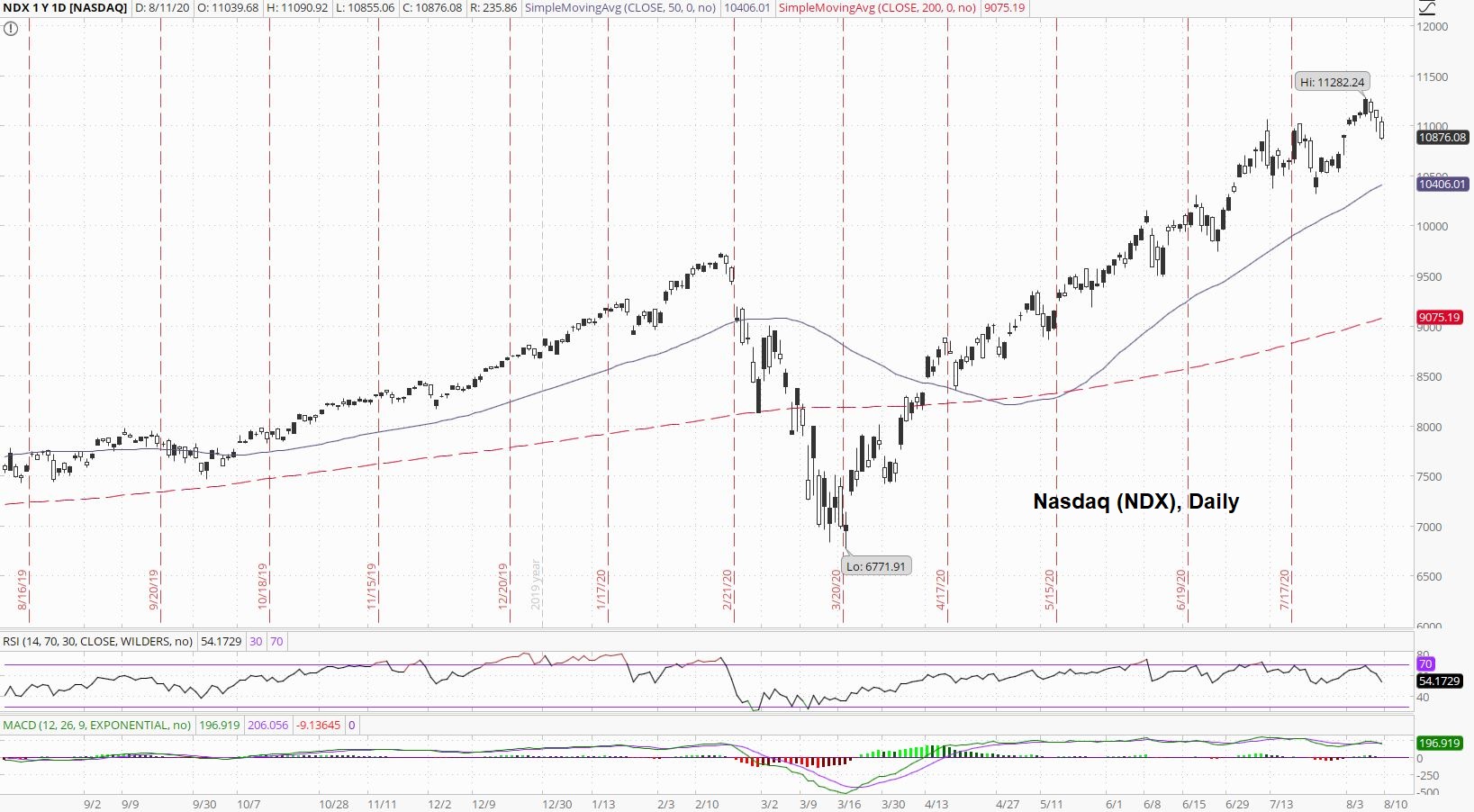 The market's not looking so good over the last three days, however.

Even so, there's not much fear with regards to market participants: 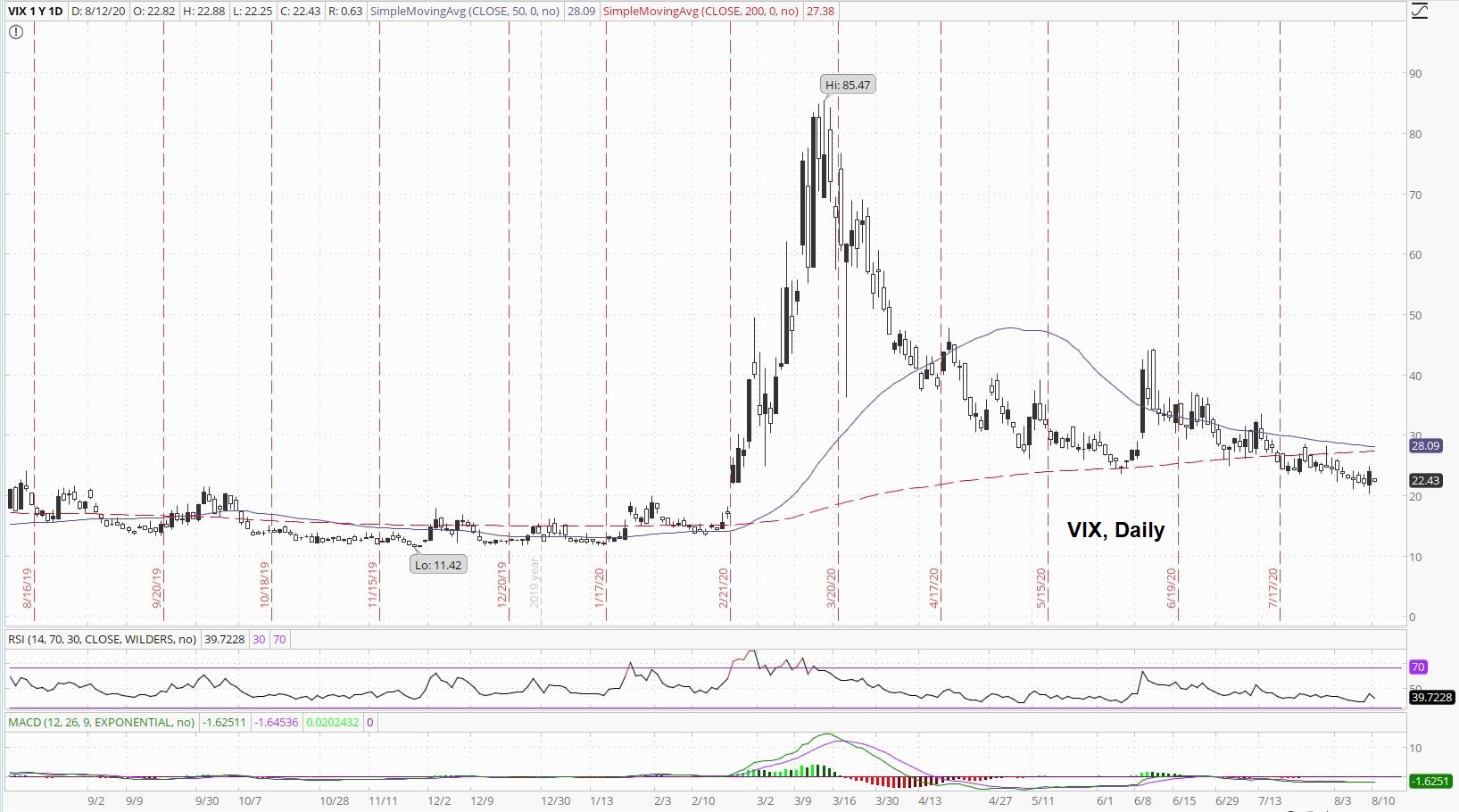 Will investors become more fearful, or less fearful, as we get closer to the elections?

The US Dollar Index is currently in a sideways choppy channel: 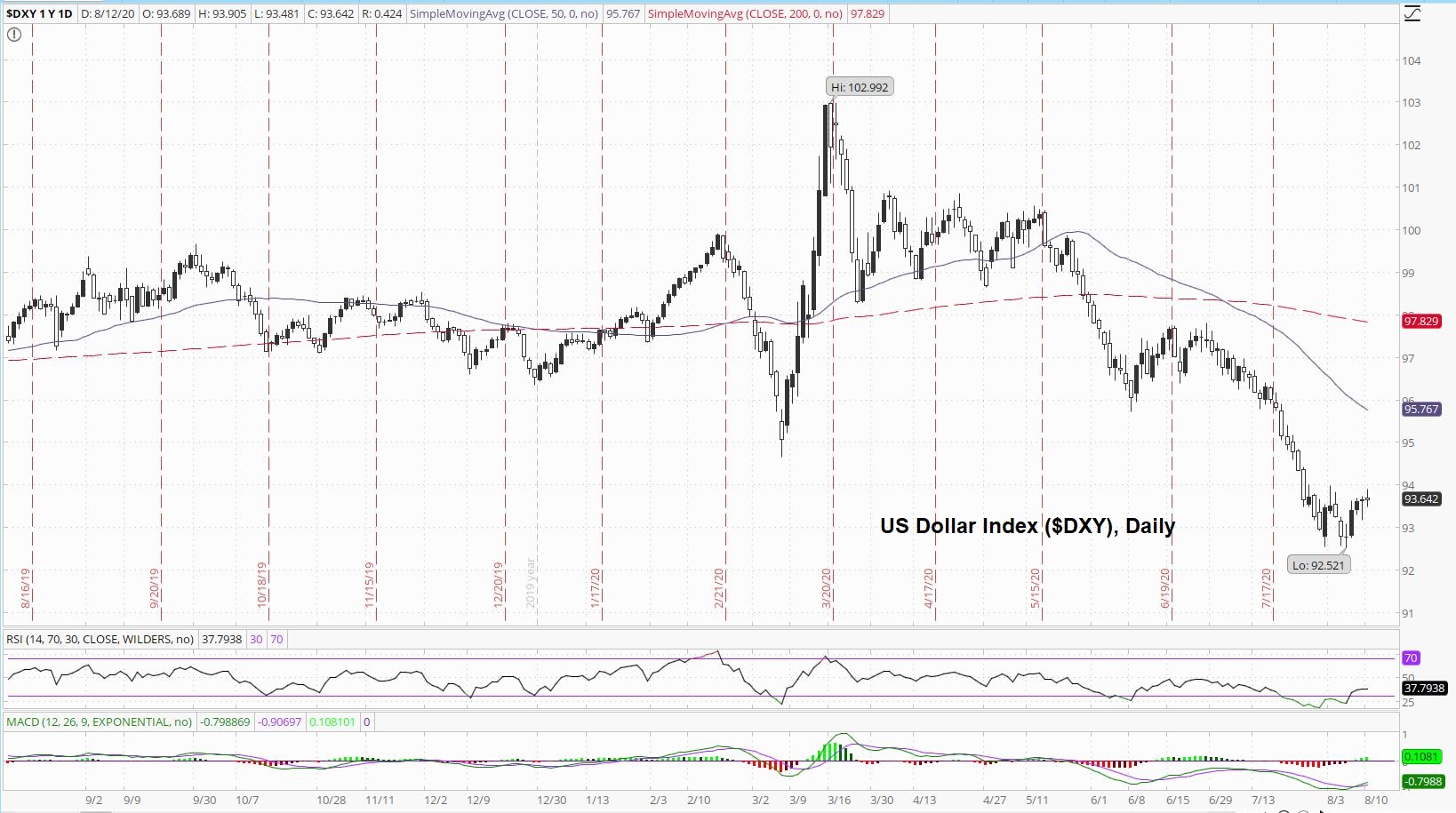 In my opinion, we're not bottom bouncing, but rather, we're consolidating for the next move lower, but that does not mean we couldn't see a relief rally before the move.

The yield on the 10-Year Note has exploded: 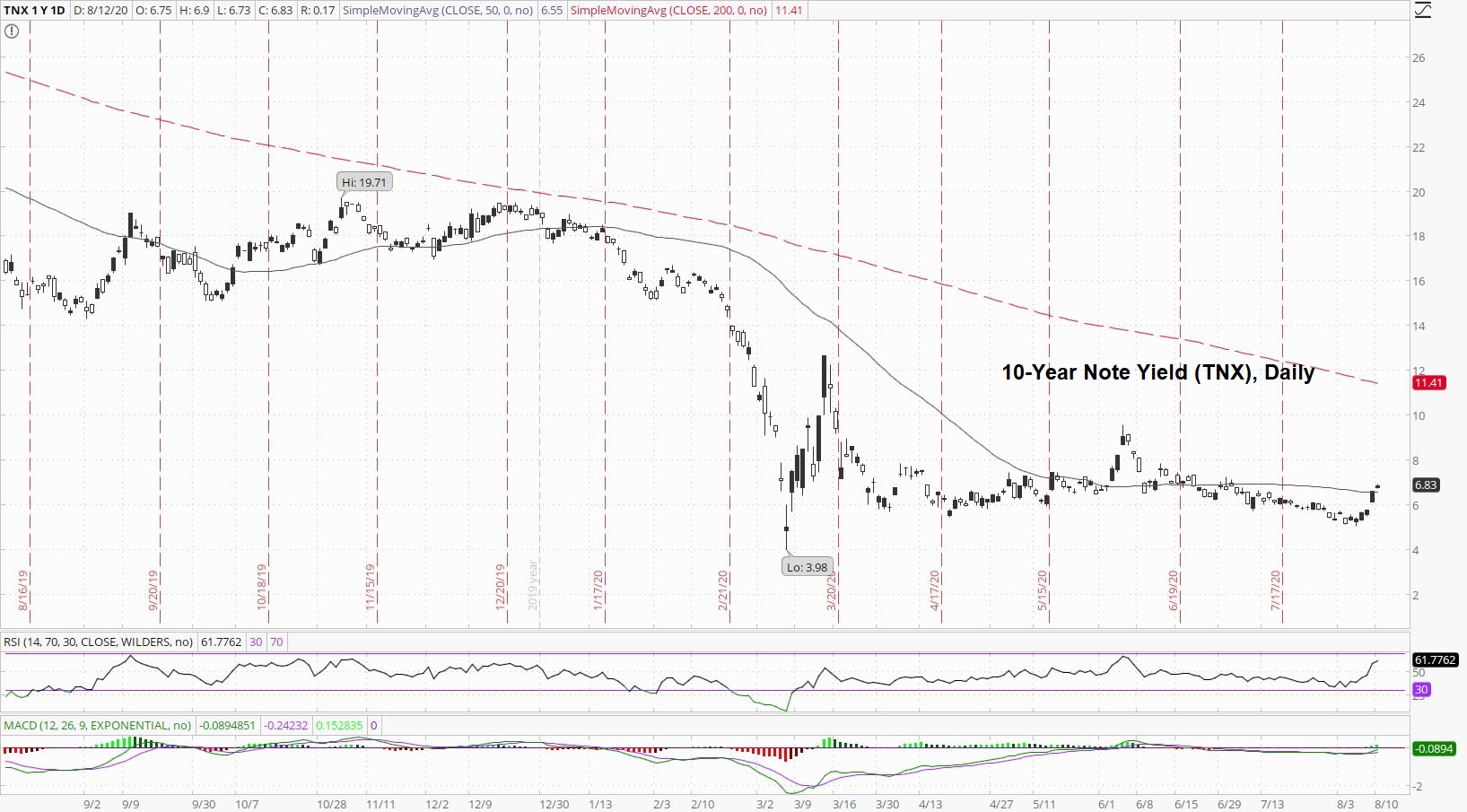