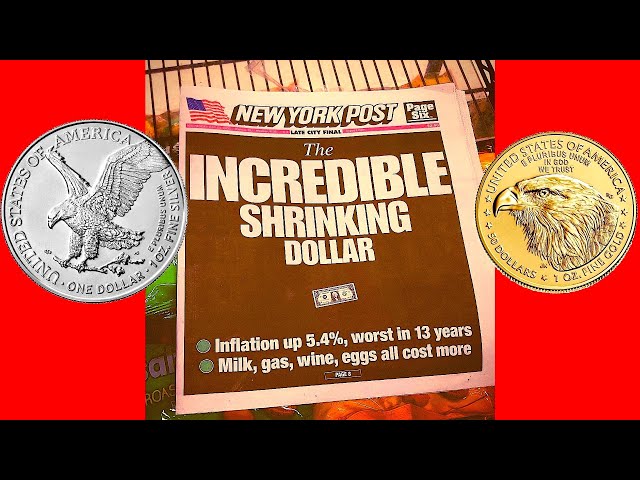 I know it sounds ridiculous.

As if I added an extra "$200" per troy ounce to the silver spot price in this article's headline.

But that is the current damning East vs. West silver "price discovery" data aggregated over the last +50 years.

At what price does the RED & BLUE line meet again?

Here is a quick background on how "polite" western silver and gold price suppression is.

I would argue it's more ridiculous to publically say that daily and weekly spoofing of the precious metals price discovery markets to the downside tens of thousands of times over a decade doesn't damage the price of an item, over time, compounding to the downside.

Most often miscalled a US dollar, the fiat Federal Reserve note continues devaluing in real purchasing power at rates not seen in nearly 40 years.

The good news is, silver and gold continue being mispriced discovered by outsized derivative and fiat financialized markets that act as having little to no clue on the capital flow comeuppance to come.

In other words, investors can still get physical precious metals positions at comparatively low historical valuations to other asset classes propped and stubbornly still hovering in bubble status.

The following clip is courtesy of this week’s PBS Frontline documentary on the outsized power the private US central bank has over average citizens' lives at the moment.

Here is one of its most apologetic Fed employees, Need Kashkari, shirking responsibility for the supposed regulatory mandates the Federal Reserve is mandated to fulfill.

Kash Carry stars as just another
self-interested fake regulator fraudster in motion
He plays it perfectly, taking 0% responsibility for their folly leveraging further

Pam and Russ Martens of WallStreetOnParade.com point out that over the last 15 and one-half years, the Federal Reserve has approved 3,576 bank mergers. It has denied not one proposed bank merger in the last more than a decade and one half of time.

They go on in this Federal Reserve failure to regulate article. Stating that, the:

"decline in the number of overall banks fails to capture the gargantuan concentration of assets at just four banking behemoths: JPMorgan Chase, Bank of America, Wells Fargo, and Citibank. According to the March 31, 2021 report from the Federal Reserve, just four banks own $9 trillion in assets of the total $22.56 trillion in assets owned by all 4,978 federally-insured banks and savings associations in the country.

To put it more poignantly, those four banks represent just 0.08 percent of all the banks in the country while controlling 40 percent of the assets."

And now the fiat Federal Reserve is pushing for a new fiat Central Bank Digital Currency unit, often called FedCoin, which will likely result in even more bank concentration once it begins being issued likely later this decade.

To end this week's SD Bullion update on brighter news and trends building.

To put that gold bullion buying into perspective, that is akin to buying 3,600 of these 400 oz gold bars you see here.

1 yr base for higher $Silver prices being built... https://t.co/IwPxNDWvE2 pic.twitter.com/hbIi1OUYdb

Turning to the base that the spot silver price has been building over the last near one year of time, my belief is it will ultimately be resolved in the medium and longer-term, strongly to the upside.

I say this confidently, knowing that silver's aggregated eastern trading price is still hovering around $226 fiat Federal Reserve notes or fiat US dollars per troy ounce.

Go back to the start of this article, and see the first embedded tweet, to see this east vs. west silver price discovery chart in both a non-logarithmic and logarithmic scale.

I contend that the RED silver spot price will again meet the BLUE eastern aggregated spot price from 2006-2008 and in early 2011.

See moment 19:55 in the video below for more on that belief below:

The question for me remains just how high above ^^^ the seemingly ancient silver price high of $50 per troy ounce will these Red vs. Blue line rendezvous reoccur.

That is all for this week. And as always to you out there, take great care of yourselves and those you love.