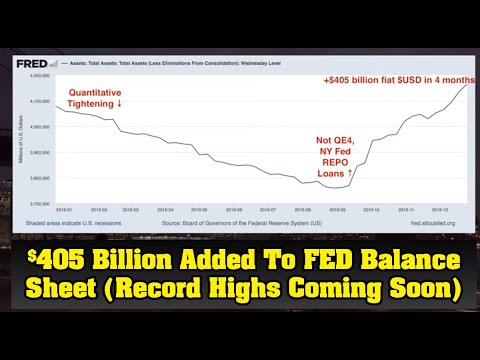 By James Anderson
Market Updates
The private central bank of the United States of America has now added over $405 billion fiat Federal Reserve notes to its official balance sheet since the official start of the New York Federal Reserve’s REPO Loan program in middle September.
In other words, the Fed is adding over $100 billion dollars to its balance sheet every month on average to close out 2019.
At this rate, the Fed’s balance sheet will hit new record nominal highs by April of 2020.
This week we’re going to dig into the size and scale of the latest data updates on the ongoing Repo Loan program ongoing.
As well, we’ll put it into further recent financial system Repo Loan operation expansions such as the Y2K change from 1999 to the year 2000, following September 11th, 2001, and the size and scale of the Repo Loan program expansion the summer leading into the Lehman Brothers bank collapse, October 2008.

Hello out there, this is James Anderson of SD Bullion with our 8th Weekly Market Update for the major precious metals.
It was a strong holiday week for all four major precious metal spot prices.
Silver took a run at eighteen only to fall a few cupronickel coins short, the silver spot price is closing around $17.85 per troy ounce.
The spot gold price closes this week strong at roughly $1,515 fiat Fed notes per troy ounce.
The spot platinum price bounced back this week gaining about fifty bucks per troy ounce closing at about $950 per troy ounce.
The palladium spot price closes just over $1,900 per troy ounce.
Finally, the gold-silver ratio slipped a bit again requiring now about 84 ounces of silver to get 1 ounce of gold.
-
Turning back to the ongoing NY Federal Reserve Repo Loan ramp up.
Our financial twitter tweet of the week goes to Daniel Lacalle who illustrates a St. Louis FRED chart showing the ongoing size and scale of the Repurchase Agreement operations ongoing.
He wrote,
-

-
Think about this.
Although the Repo market is now about -40% down in notional size versus the Repo Market back in 2008, the nominal amounts of short term loans now being handed out from the NY Fed to its 24 primary dealer investment banks, are close to double the weekly size of their summer 2008 peaks.
Let’s dig deeper into the FRED chart so you can see the even older context.
Here is the Y2K precaution the Federal Reserve injected into the REPO Loan program as concerns about digital computer shutdowns had people worried about a financial glitch failure as we rang a new millennium, the year 2000.
Then there were REPO loan ramp-ups following the dot-com bubble bust and following September 11th, 2001.
Finally, there is the summer Repo Loan ramp from the year 2008 versus the size of the ongoing operations today headed into 2020.
Perhaps in the coming year, we will learn more about why banks are again not lending to one another overnight. And perhaps which of them will possibly fail and or perhaps require a bank bail-in, bankruptcy, or another calamity in the global financial markets.
We will be back in 2020 to report on this ongoing story as well, break down coming news and events affecting the major precious metals markets.
From all of us here at SD Bullion, we wish you a great safe holiday season. A wonderful new year and decade to come.