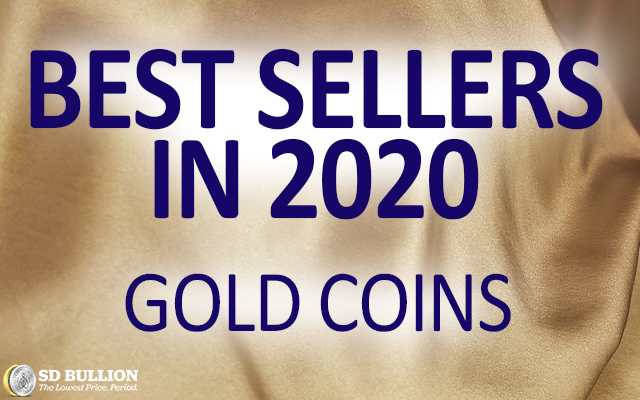 Gold has always ranked among the safest of investments for those looking to diversify their portfolio while looking for a hedge against inflation. According to the World Gold Council, demand for gold has quadrupled since the 1970s while the use of gold grew exponentially in a variety of industries, such as health, electronics, and environmental.

Gold is a corrosion-resistant metal, can be easily stored and transported, and will retain its value for generations to come.

Gold coins can be seen as the essence of physical gold investment. Because they are backed by sovereign governments and are considered legal tender in their countries of issuing, they are a very liquid form of gold bullion. Investors are constantly looking to purchase gold coins and they can be usually sold with slightly better premiums when compared to gold bars.

Due to all those qualities, it was no surprise to see the gold spot price reach all-time highs in 2020, at the peak of the pandemic, when market uncertainty, unprecedented money printing and cuts to interest rates caused nearly all fiat currencies in the world to plummet with devaluation and to increase the Federal debt.

Continuing our series of the best-selling bullion products of 2020, this article will cover the top 5 most successful gold coins from last year among our customers.

This SKU is an excellent choice for those looking to amass government-minted physical gold in the form of bullion coins, but have no demands in relation to design or country of origin.

The option of Gold Coins - Random Designs offers our customers a significant discount for coins guaranteed to contain 1 troy ounce of gold that is available in our stocks at the moment of purchase.

Purchasing this product can get buyers a wide range of coins including all of the other products from this list. This could be coins such as the American Gold Eagles, the Canadian Maple Leafs, but also potentially the Austrian Gold Philharmonics, Australian Gold Kangaroos, Gold Britannias, Chinese Gold Pandas, and Mexican Gold Libertads.

The Gold Philharmonic from the Austrian Mint is considered by many, one of the most beautifully designed gold bullion coin programs in the world with the majestic Musikverein Pipe Organ on the obverse and a medley of orchestra instruments on the reverse.

Produced by the Perth Mint, Gold Kangaroos have portrayed different renditions of this national Australian animal on the reverse, while depicting a profile of Her Majesty Queen Elizabeth II on the obverse, similarly to other gold bullion coins produced within the British commonwealth.

Gold Britannias also carry a portrait of the Queen on the obverse, but the reverse is adorned with Lady Britannia, namesake of the program and female personification of Britain. They are produced by the Royal Mint, in operation for more than one thousand years.

Since its first strike in 1982, the Chinese Gold Panda has changed designs in nearly every year of mintage, making it an excellent collectible coin. The obverse features the gorgeous Hall of Prayer in the Temple of Heaven, the most important of Beijing’s imperial temples.

Last, but not least, the Mexican Gold Libertads, minted by La Casa de Moneda de México. The Mexican Mint was established in 1535, making it the oldest mint in operation in the Americas. The coin is embellished by Winged Victoria, an angel symbol of Mexican pride and independence.

These gold coins feature, on the obverse, a portrait of Paul Kruger, President of the Republic of South Africa during the turn of the twentieth century. The political figure also lends his name to the bullion program combined with the name of the nation’s currency, the “rand”. Surrounding the portrait is the country’s name in dual language, “SUID-AFRIKA - SOUTH AFRICA”.

The reverse of the coin depicts a galloping Springbok Antelope on an open field. The springbok is the country’s national animal symbol. Above it is inscribed “KRUGERRAND” and below it are the words “FYNGOUD 1 OZ FINE GOLD”.

The American Gold Buffalo was the first gold bullion coin produced by the United States Mint with 99.99% pure gold (24 karats), unlike its predecessor, the American Gold Eagle. Both coins carry the same face value of $50, though.

Gold Buffalos were first minted in 2006 in response to the passing of the Presidential $1 Coin Act of 2005, which mandated the production of a 1 troy ounce 24-karat bullion coin, limiting its mintage to 300,000 per year and assigning a denomination of $50 dollars to it.

The program was named in honor of the American Bison, a near-threatened species native to North America. A sculpture of this bovine adorns the reverse of these gold coins, along with the inscriptions “UNITED STATES OF AMERICA” on top, the face value, weight, and purity on the bottom, “$ 50, 1 oz. .9999 FINE GOLD” and both mottos “E PLURIBUS UNUM” and “IN GOD WE TRUST”. The use of the Bison for the design symbolizes the rich wildlife present in America.

The obverse depicts a rendition of a Native American Chieftain. The designs on both verses were created by James Earle Fraser for the Indian Head Nickel and used on that denomination from 1913 to 1938. The US Mint revitalized the design by using it on the American Buffalo Gold Bullion Coin program.

According to Fraser, the Chieftain portrayed in his design has a combination of features from three Chieftains of different American Indigenous tribes, the Big Tree, the Iron Tail, and the Two Moons. The word “LIBERTY” is written in front of his forehead, and the mint year on his shoulder.

The Royal Canadian Mint was founded in 1908 as a branch of the British Royal Mint in order to help spread the mintage of circulating coins across the British Commonwealth. The Mint started producing the Gold Maple Leafs in 1979 as the official gold bullion coin of Canada. The coin boasts as a legal tender within the country.

The obverse of these gold coins displays the profile of Her Majesty Queen Elizabeth II (different renditions have been used throughout the years to represent different moments of her life). The outline is inscribed with the Queen’s name on top, the face value, and the mint year on the bottom.

The reverse portrays a gorgeous, highly detailed maple leaf, one of Canada’s national symbols. It is encircled by the country’s name on top, the gold purity on both sides, and the words “Fine Gold Or Pur”, with the coin’s weight in between them.

All sizes from the Gold Maple Leafs were of astounding success in 2020.

With more than 200 years of history, the United States Mint has made quite a name for itself in the bullion market. The American Gold Eagles are considered by many to be the most acclaimed gold bullion program in the world today and all sizes of this gold coin enjoyed tremendous success in 2020.

Ever since 1986, the program has expanded to include American Platinum Eagles (first struck in 1997) and American Palladium Eagles (as of 2017).

The obverse of these gold coins features a celebrated portrait of Lady Liberty, a symbol of America’s freedom and enlightened thinking, as designed by Augustus Saint-Gaudens, eminent American sculptor, originally for the $20 Double Eagle. The depiction displays the Goddess personification of freedom striding forward, in the viewer’s direction, with a strong wind blowing Her vests, hair, and the flame on the lit torch She holds on Her right hand. She also holds an olive branch on the left hand, symbolizing the wish for peace. The sun rises in the horizon behind Her and the Capitol building is visible on the lower left-hand of the image, with fifty 6-pointed stars encircling the whole scenery, representing the fifty American States.

The original reverse was designed in 1986 by Miley Busiek and it shows a family of eagles, one of which is approaching the nest in flight with a branch on its talon, as adding another piece to its home where its mate and nestlings await. The mottos “E PLURIBUS UNUM” and “IN GOD WE TRUST” are written on the sides of the design, “UNITED STATES OF AMERICA” on top, and the weight and face value on the bottom.

In 2020, the US Mint announced they would be introducing new anti-counterfeiting measures to the program, and, along with them, a new design for the reverse. Created by wildlife artist Jeannie Norris, the new reverse shows a single eagle’s head, earnestly staring ahead. The inscriptions around the picture remained the same, with some slight alterations in their positions.

The American Gold Eagles are minted in four different sizes and denominations: 1 troy ounce ($50), ½ oz ($25), ¼ oz ($10), and 1/10 oz ($5). They are struck with an alloy of 22-karat gold (91.67% pure). In other words, small amounts of copper and silver are added to the alloy in order to create a more durable and resistant coin. However, they are still guaranteed to contain the amount of pure gold specified on each coin’s denomination. The silver and copper are actually added on top of the gold content and, thus, American Gold Eagles are slightly heavier than other 24-karat bullion coins (such as the Gold Buffalo and Gold Maple Leaf).

At SD Bullion, we take pride in having served our customers throughout 2020 and we would like to extend our deepest appreciation to their loyalty. All products mentioned above can still be purchased from our stocks, including the new issues recently released in 2021.

Please, don’t hesitate to contact us over the phone at 1(800)294-8732 or through our live web chat feature. One of our representatives will be glad to assist you from Mondays to Thursdays, 8 am to 6 pm EST, and on Fridays from 8 am to 5 pm.