The Illness has exposed our financial fragility,

Those were the words of Jonathan Tepper today, the founder of Variant Perception, a macroeconomic research group.

As of the end of this week both the states of California and New York, are now on indefinite lockdowns, as the growth of this illness within the United States is moving at a clip faster than many thought possible.

US stocks are now nominally valued at their lowest levels in three years of time.

Let’s get a longer-term perspective of where we currently are in this stock bear market, with Scott Minerd, a public silver bullion bull since $35 oz back in the year 2012.

A bond trading billionaire, who knows the endgame of this fiat financial system leads to revaluations higher for precious things.

See the Goldman Sachs unemployment research chart. The situation might be even worse.

Perhaps we may see as high as 3 million unemployments filed once the data fully filters in.

Calls for losing around -1/4th of the nation’s GDP or gross domestic product are also making the commercial bank research rounds this week.

Threats of potential financial terror are now yielding bailouts of almost anything and anyone globally.

We are now back nearing fall 2008 levels, in terms of government and central bank market interventions.

Now we are starting to see trillions of commitments by this administration and other financial authorities around the world.

Here are just some of the headlines from this week regarding escalating overnight REPO loans, and those are the primary dealer banks who may be involved in this festering and financially troubling situation.

Perhaps bondholders may want to look back to the post WW2 high US dollar debt level era to see who took the largest haircuts back then as inflation melted away much of the battle accrued debts.

The private Federal Reserve has not had time to update its FRED balance sheet charts but this data here shows they are actively taking more items in their books.

Here is how their FRED chart will look by the time they get around to updating it.

With this current dire economic situation, we will likely see their balance sheet more than double in the coming years.

Word out of the Royal Canadian Mint this week is their bullion production facility and the entire staff will be taking a minimum two hiatus for their personal safety.

As you likely well know by now, the physical precious metal bullion industry is lacking in bullion supplies all while demand remains at very high levels.

This current silver bullion product shortage situation has now bled over into vanishing platinum and gold bullion supplies as well.

The COMEX driven spot prices for gold and silver continue to approach a not since the 1930s Great Depression high, now nearly 120 gold-silver ratio at the moment.

The best ‘free-market’ data we have currently on the American Gold Eagle vs American Silver Eagle coin sales ratio is showing a current GSR of around 83. It was even lower only a few days ago.

And while there may be about a year and a half worth of annual Indian silver import volumes sitting in current COMEX warehouses. Hard to say at what silver spot price much of the lighter green pile will convert to a darker green and possibly get withdrawn from that leveraged fractional reserved supposed silver price discovery process. 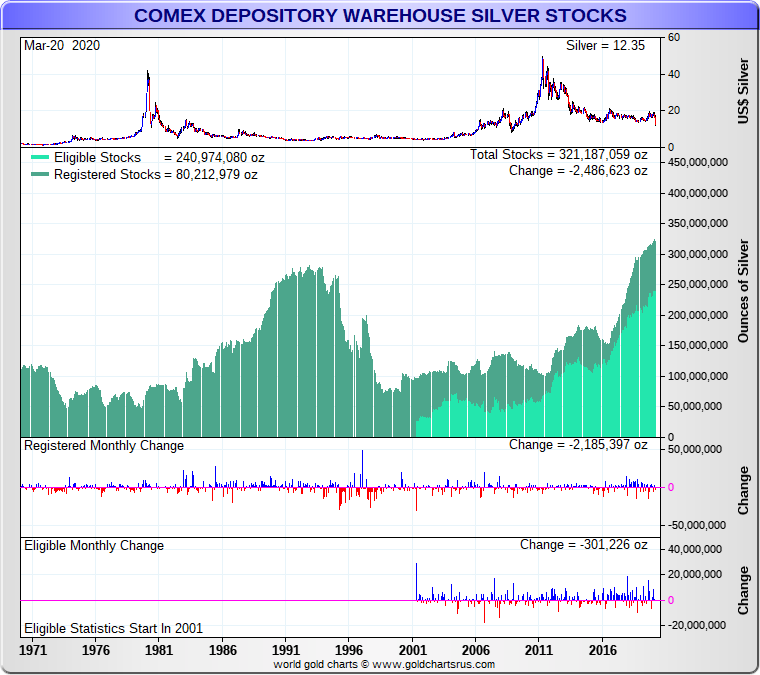 Another question comes to mind, who would be able to work and actually have the immediate capacity converting those non-homogenous 1,000 oz silver bars in silver bullion products investors and dealers would like to have on hand today.

Next week we’ll be back to talk about the ongoing ramping fiat currency fueled bailouts.

We will see if this US stock market bounced, or if it will just continue devaluing to gold bullion as this trend looks set for the decade to unfold.