Wild Volatility Continues As Billions Get Thrown At Markets & Economy

Silver enters a bear market in one single day, and the stock market gets locked limit-down...

The wild volatility in the markets continues.

It seems for now, the only breather the markets take is the brief moment everything shuts down on Friday evening until the moment the markets re-open on Sunday evening.

Last Sunday evening, the markets opened to wild volatility, with plenty of follow-through on Monday.

Check out the massive move in the paper silver futures market: 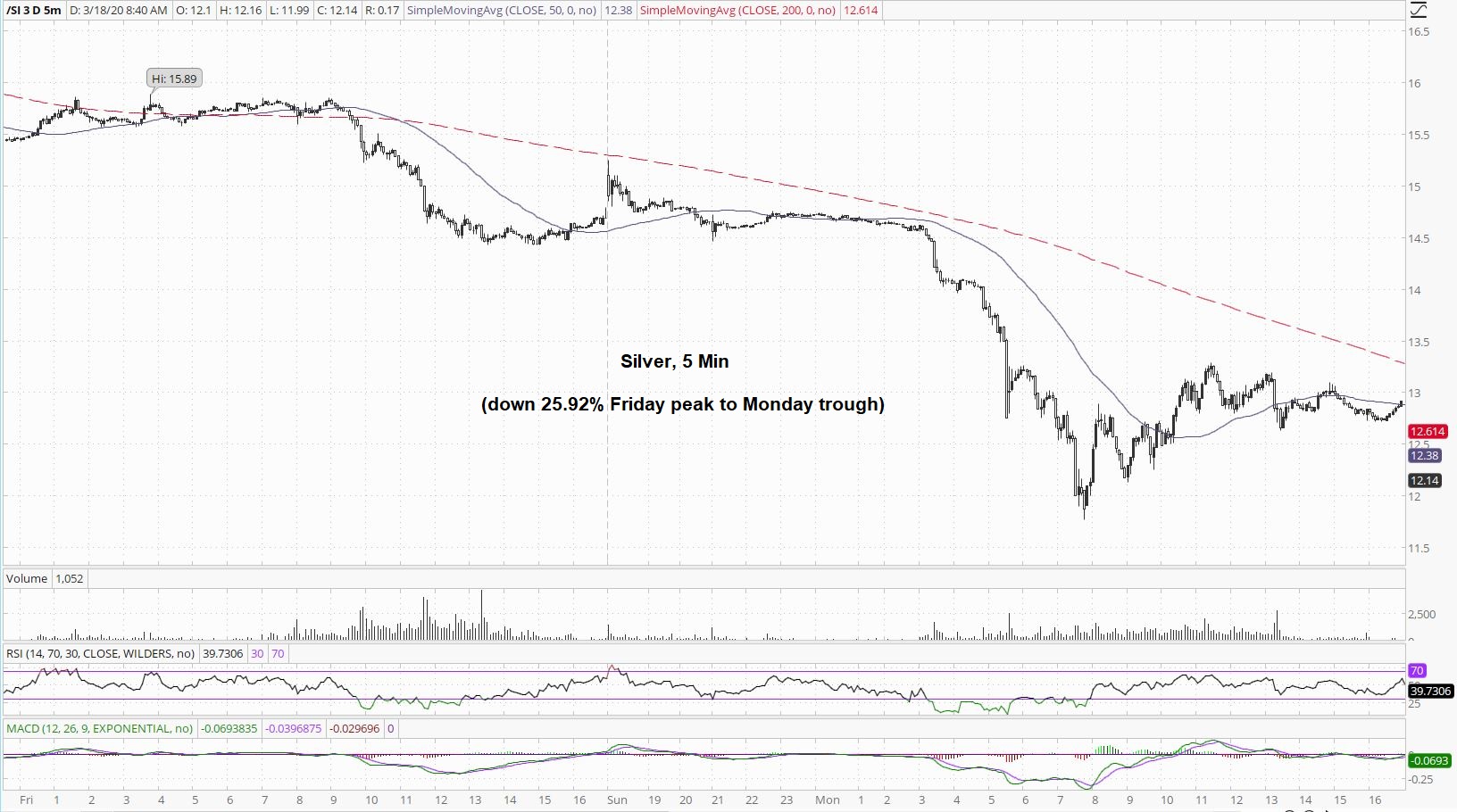 With a drop of over 20.0%, silver essentially went into a bear market in one single day!

What all is happening in the markets right now to cause such major volatility?

For one thing, the fundamental economic news is deteriorating by the day.

This is having major spillover effect into the markets, which is causing both central bankers and politicians to react to one degree or another, and by reacting nearly every single day to try to stabilize the markets, the markets are often times reacting the opposite of the desired effect.

Lets again use Sunday as the example of this.

On Sunday afternoon, before the markets re-opened, the Coronavirus Task Force held its daily press briefing at The White House, and during the briefing President Trump had announced the Fed had slashed interest rates from 1.0% to 1.25% all the way to 0.00% to 0.25%. Additionally, President Trump announced the Fed would begin a new Quantitative Easing program to the tune of $700 billion ($500 Billion in Treasury's and $200 Billion in Mortgage Backed Securities).

On Monday morning, the minute the markets opened, the stock market (in this case the Dow) was locked-limit down immediately for 15 minutes: 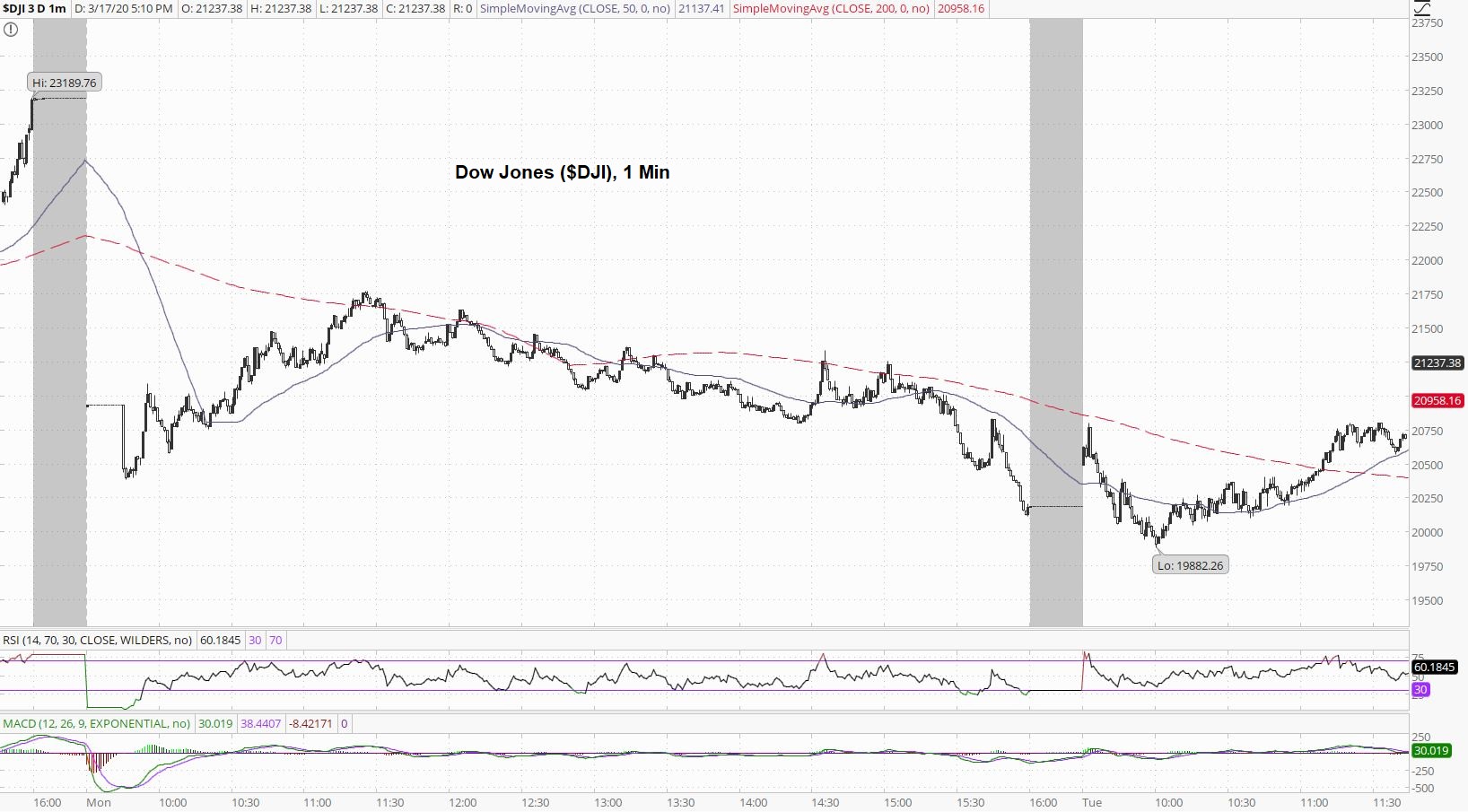 Which is the opposite of the desired or intended effect, which was publicly stated as President Trump announced during the press briefing that the Fed's move should be positive news for the markets.

The stock market locked limit-down did not only happen at the open on Monday at the open, and it can happen again. A lock limit-down is where trading halts for a period of time, in phases. Specifically, if the stock market falls 7.0% in one single day, the market is halted for 15 minutes, if the market continues to fall, trading is halted again when the drop equals 13%, this time halted for one hour, and if the market continues to fall even further on the same day, to 20%, trading is halted for the remainder of the day.

Of note is the fact that other nations are intervening in their markets in other ways, such as by the banning of short-selling.

What does all of this mean for the gold & silver investor?

The gold & silver investors are facing what is known as "premium creep" right now, which means that the paper price is becoming disconnected from the price for physical metal in-hand.

Because at such a low paper price, there is massive demand for physical metal, however, because sellers are unwilling to sell their metal at such low prices, individuals, dealers and others must pay much higher premiums on the metal to entice a seller to sell.

This is why the paper price can display $12 although the price to actually get, say, an American Silver Eagle in-hand, is upwards of $20.

Said differently, there are disconnects all over the place in the markets right now, and this is easily seen in the financialized, paper price of silver when compared to the price for actual, physical silver.

This Wednesday morning, assuming a gold price of $1500 and a silver price of 12, we can calculate gold-to-silver ratio at 125: 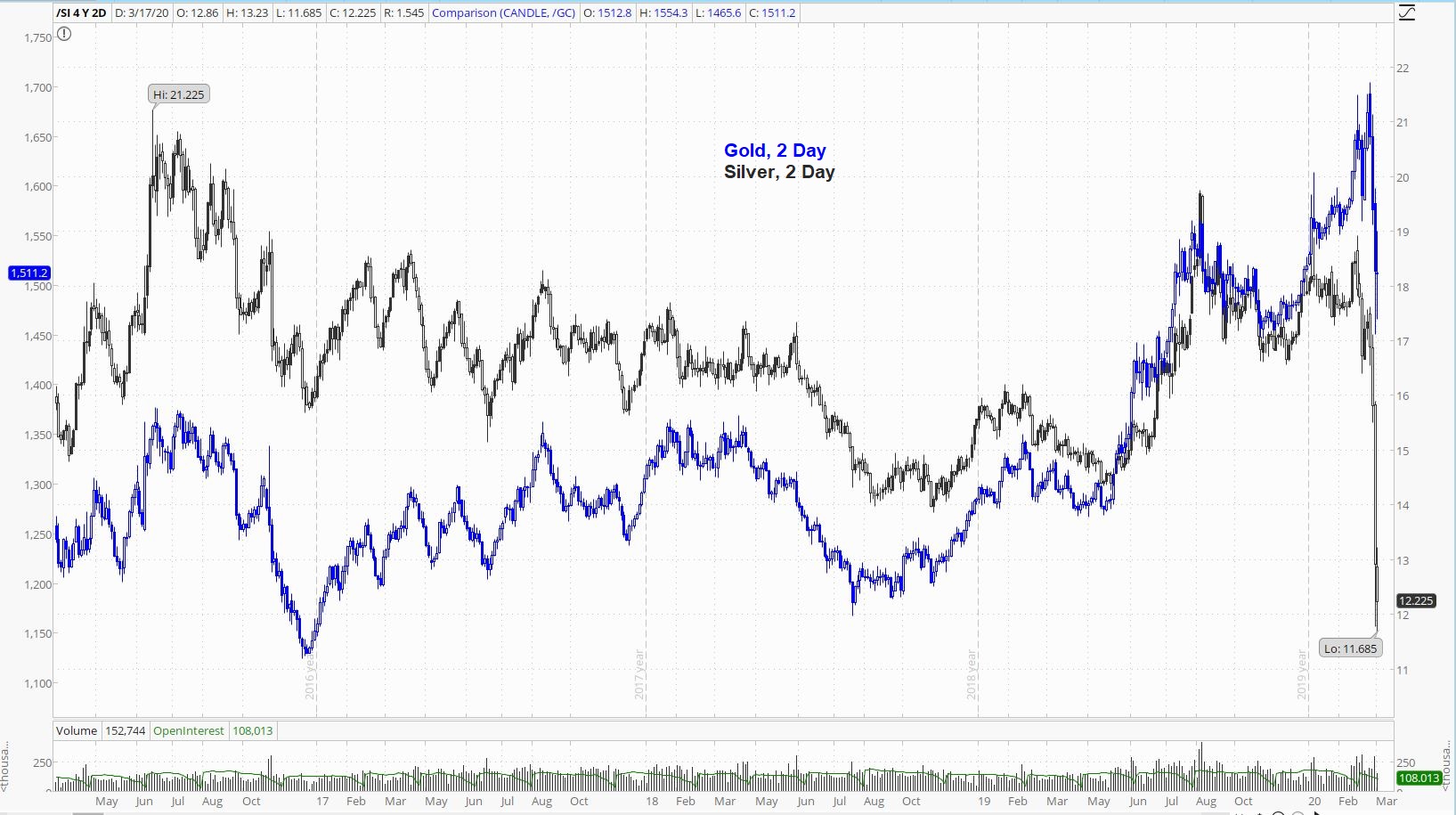 This is, at least in US history, the highest the ratio has ever been, and in the 2-day chart above, we can really see silver's under-performance to gold, especially over the last couple of days. 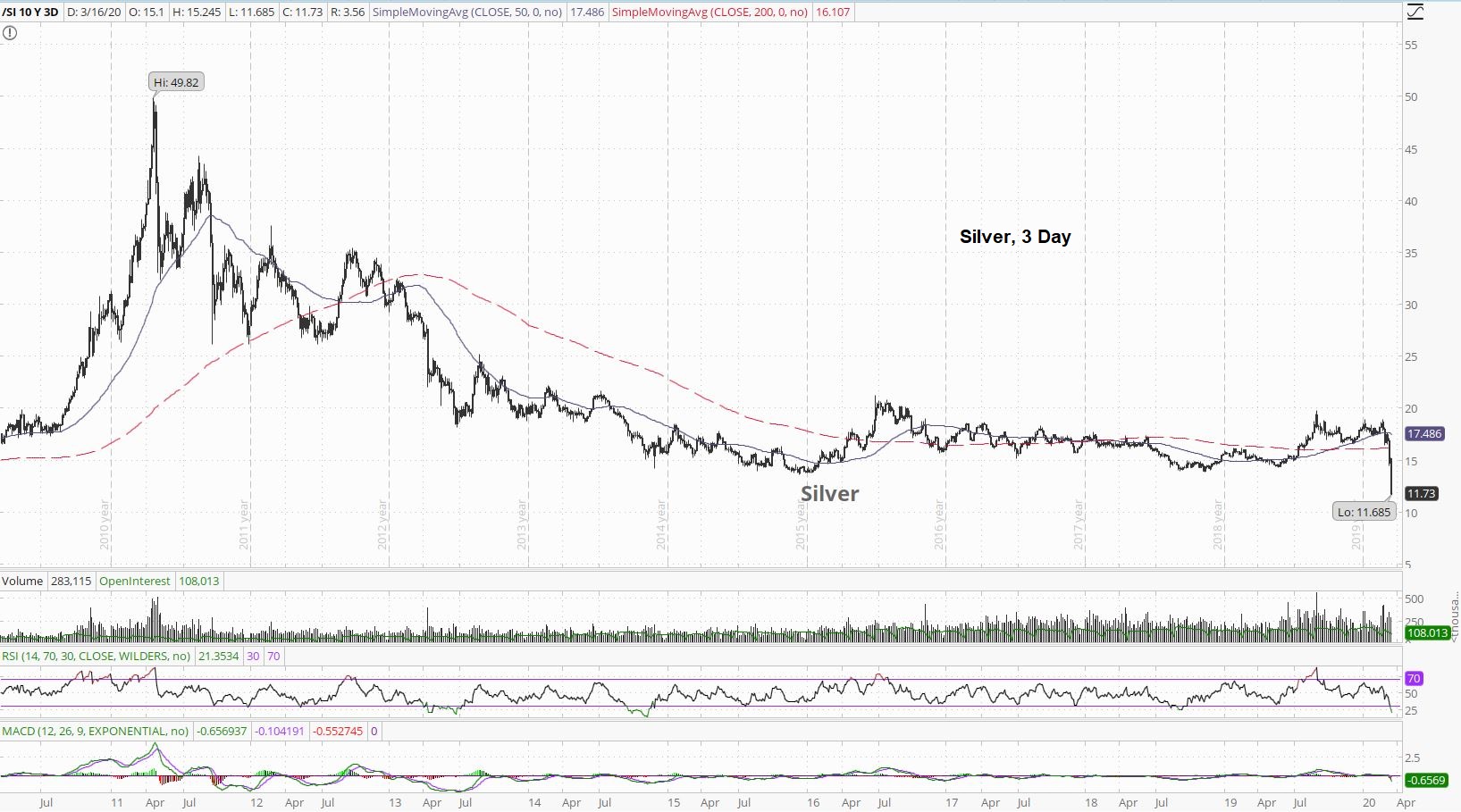 Although it can't be stressed enough: This is the paper price and not the price for actual physical metal in hand when taking into consideration the premium.

The premium is the additional costs other than simply the paper price to get the physical silver in-hand, and there are premiums on all weights of silver, from the smallest 1 gram bar to the 1,000-ounces.

Gold has been holding its own throughout this worsening financial crisis: 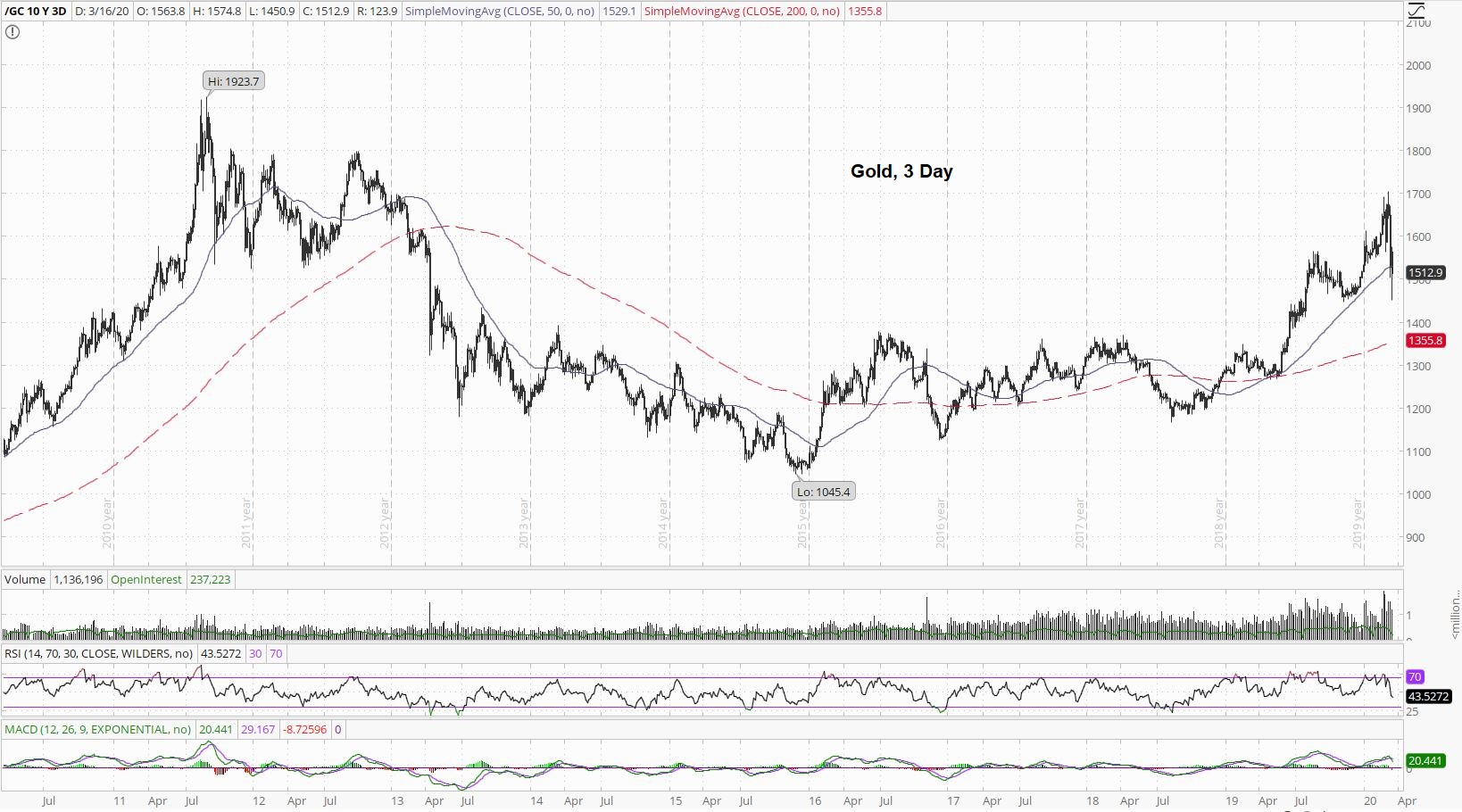 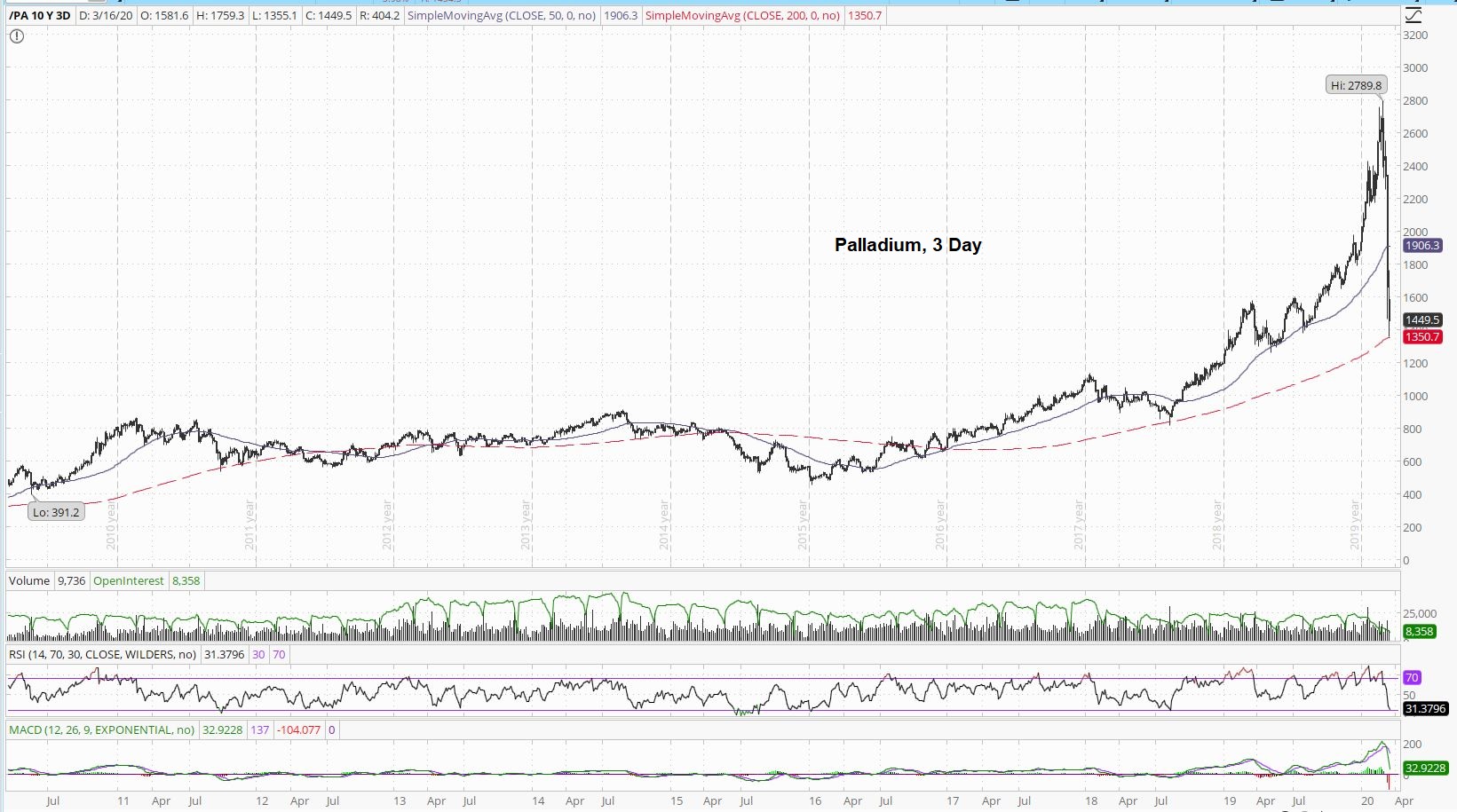 Will palladium be the eventual recipient of a flight-to-safety bid?

Platinum is also down big time over the last couple of months: 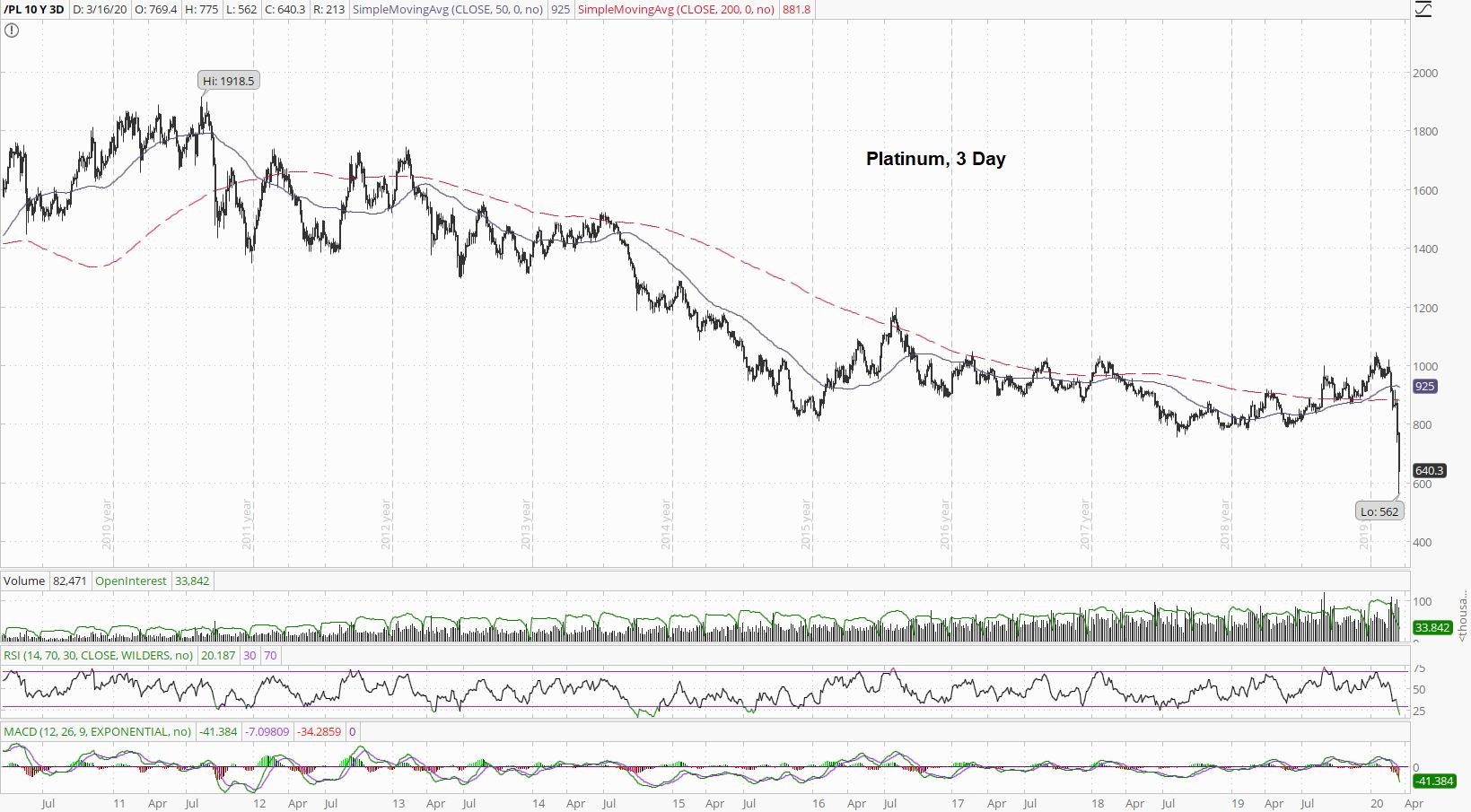 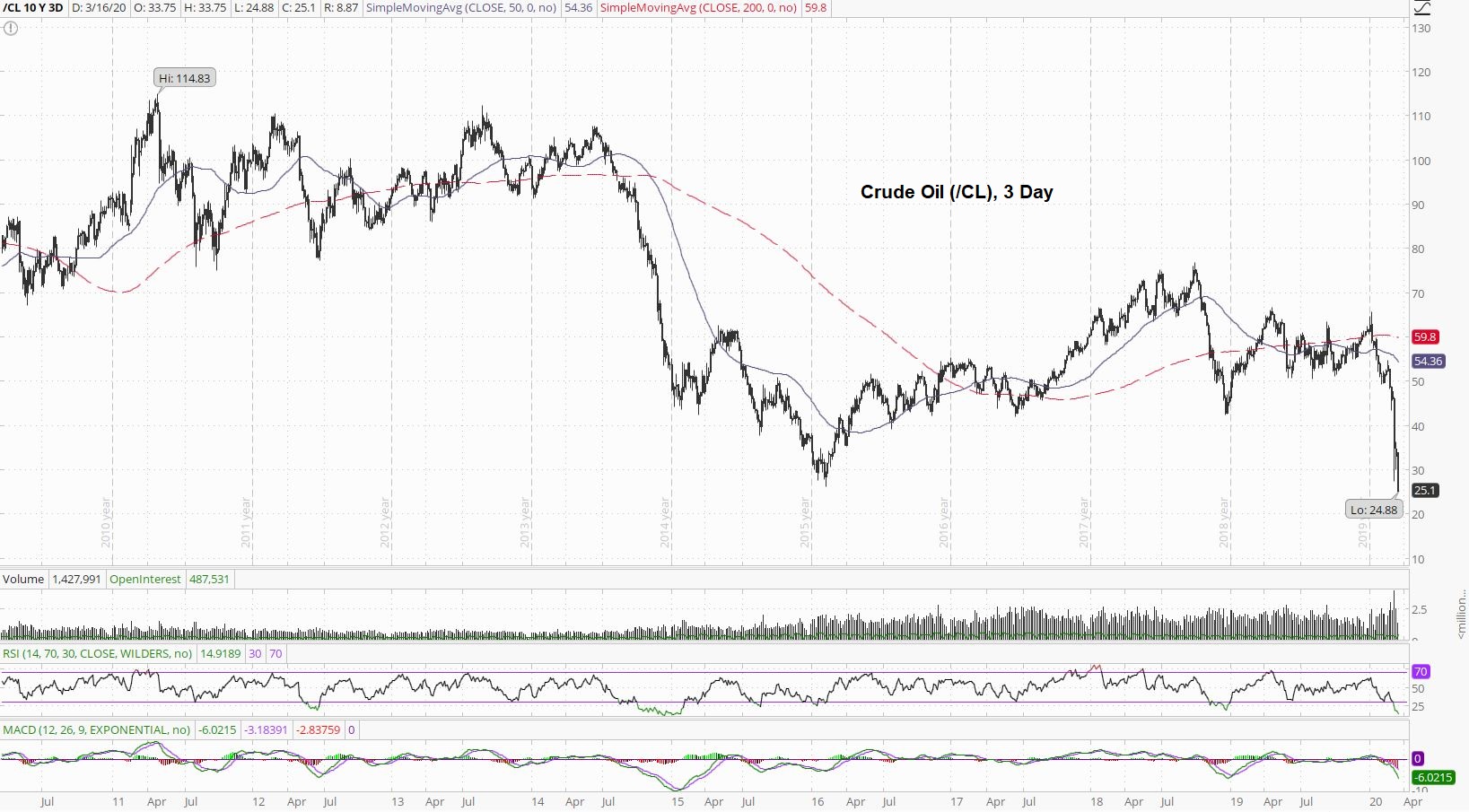 There is no doubt the demand for oil will be significantly less than it has been.

Although copper has not put-in a new lower-low: 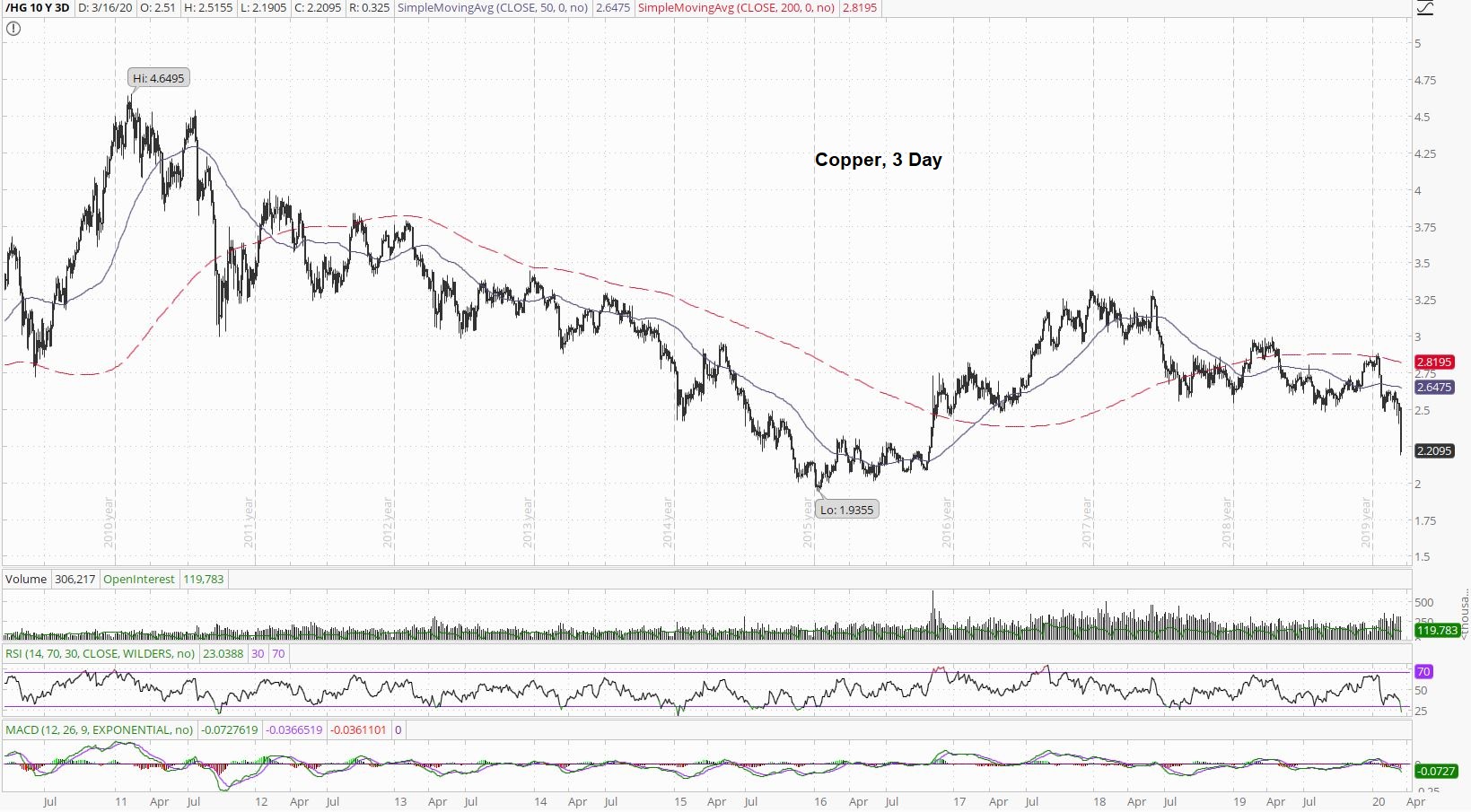 Is copper showing us there has simply been too much monetary inflation and currency debasement, or is copper just lagging crude oil?

Market volatility has absolutely soared as reflected by the VIX: 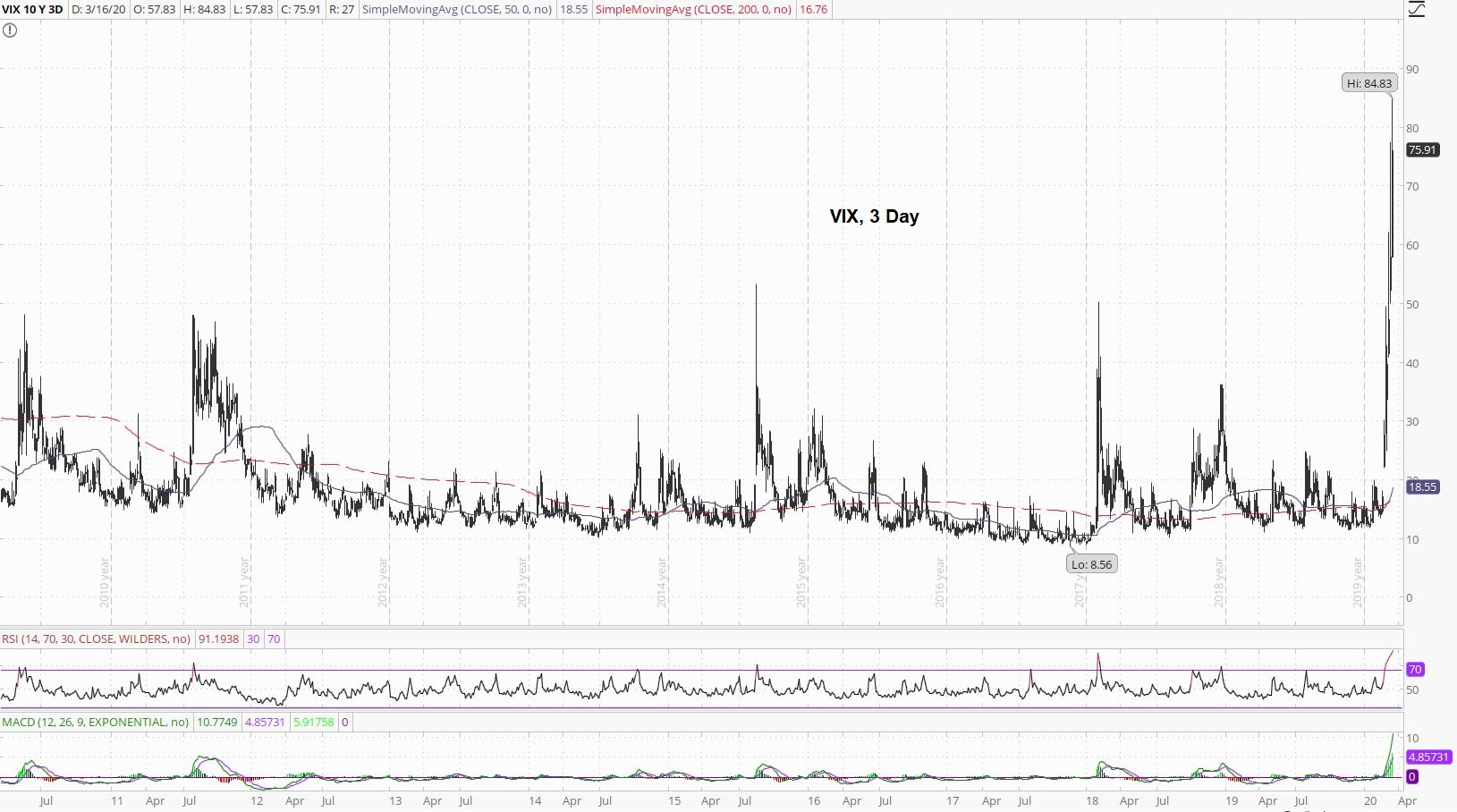 If the markets aren't done falling, the VIX may not be done rising. 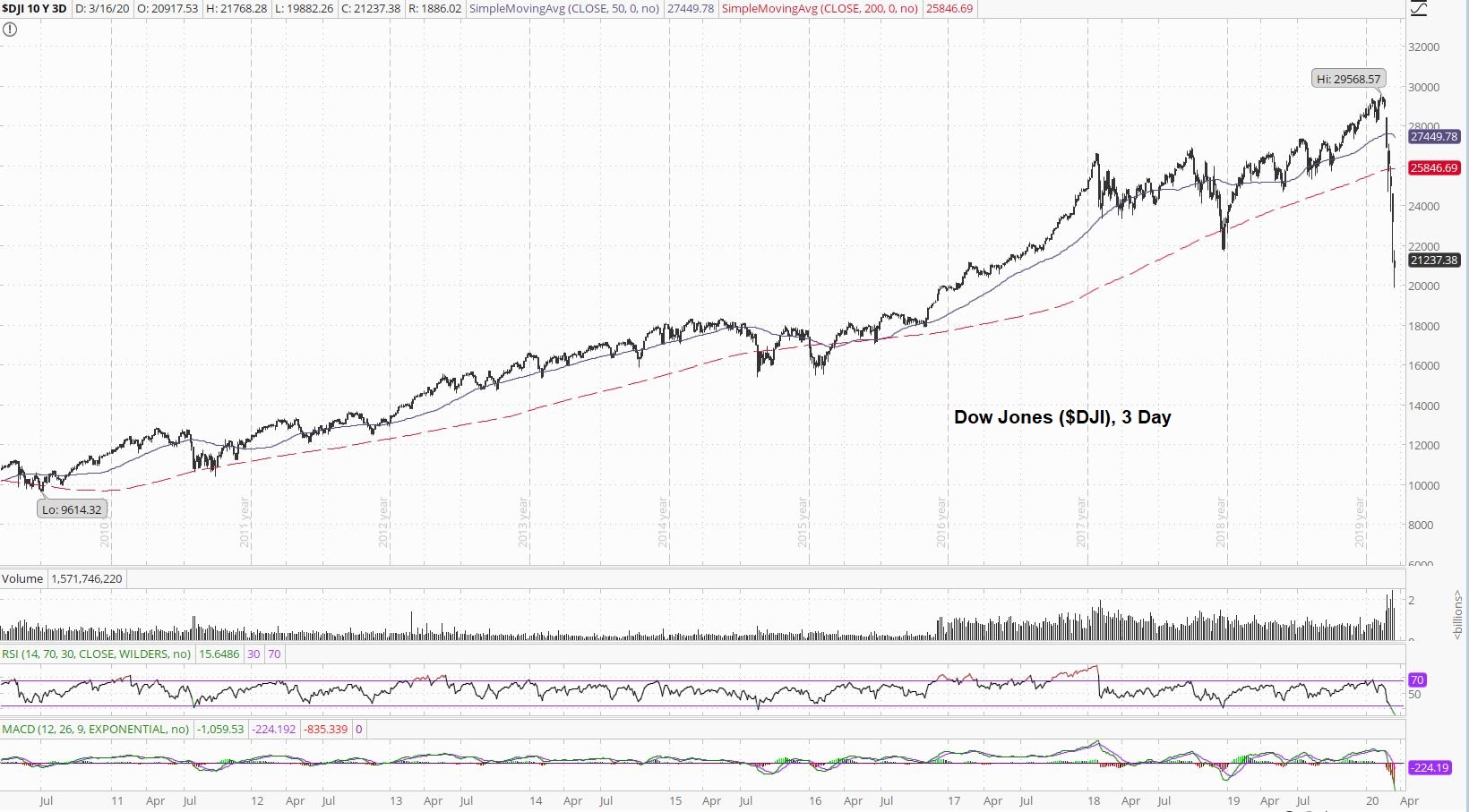 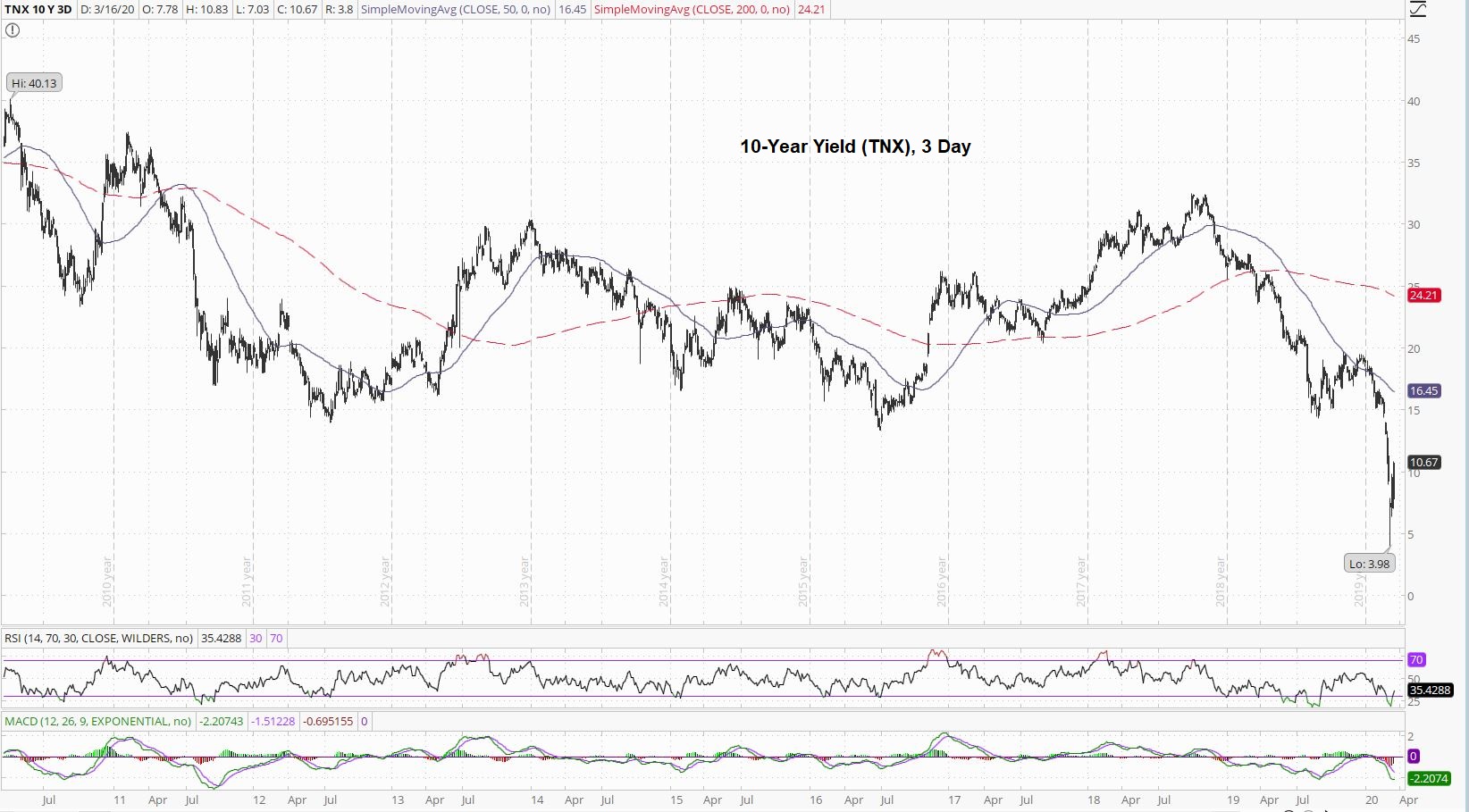 The US dollar index is back over 100: 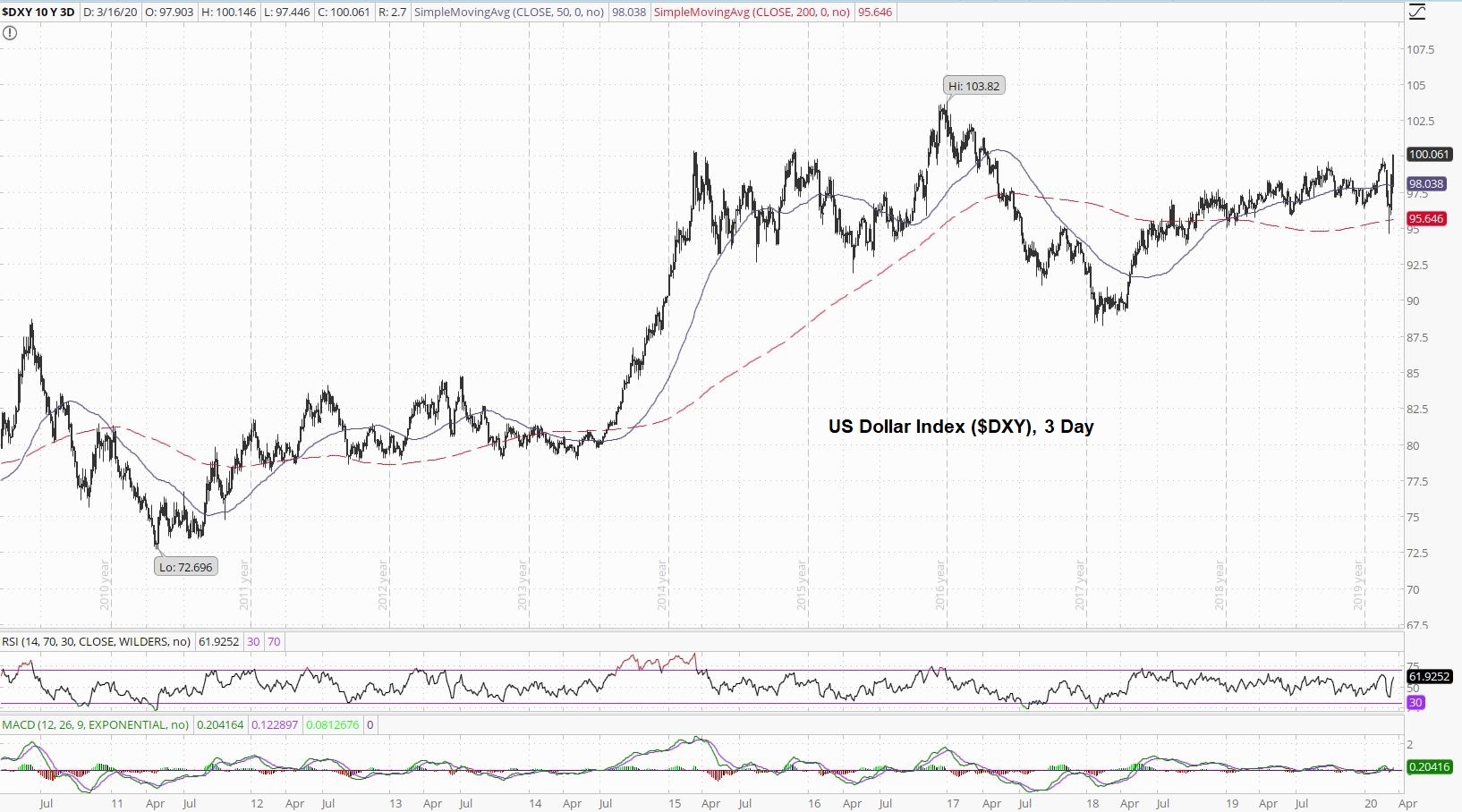 However, since the run that began midway through 2014, we've been trading more or less in a sideways choppy channel ever since.

What to expect going forward?