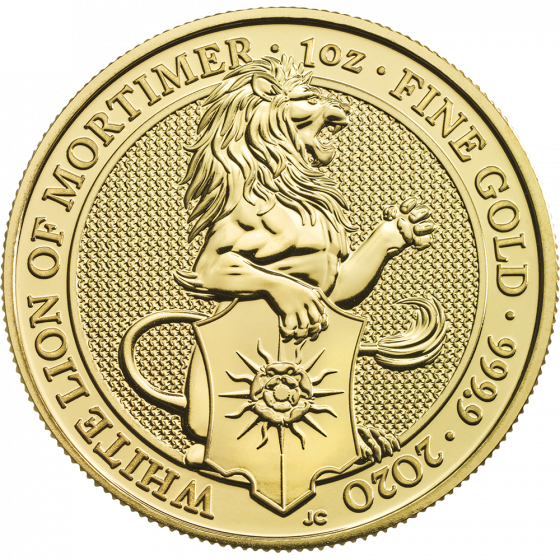 The White Lion of Mortimer is the first release of two in the 2020 Queen’s Beasts coins. The second design will be the White Horse of Hanover, which will be released by the British Royal Mint around March 2020. Each release is minted in two ounce coins for silver and for gold it is minted in both one ounce coins, like this coin, and a ¼ weight using .9999 gold. Also, the 1 oz Gold Queen’s Beasts coins have averaged a limited ~20,000 coin mintage for each design.

The Royal Mint is considered to have officially started in 886 AD, and has continued minting coins for Great Britain ever since. The mint’s location was moved from London to Wales in 1966 and faced tough times in the early 1970s while the western world was going through a recession. The mint never fully recovered from that recession until 2012, when they were selected to produce the medals for the 2012 Olympic Games. The Royal Mint also now has a touring service with a brand new visitor center available for visitors of the Mint, which has helped with the mint’s financial standing as well. In 2015, the British Royal Mint announced they were going to begin producing gold and silver bullion products once again after an over 50-year break from doing so.

The obverse features a very similar to all products produced by the British Royal Mint, Australian Perth Mint, Royal Canadian Mint, and New Zealand Mint since 1983. This familiar design features a recent depiction of Her Majesty Queen Elizabeth wearing her crown. Around her image are the words “100 POUNDS”, “ELIZABETH II”, “D.G.”, & “REG F.D.” The DG REG FD stands for “Dei Gratia Regina Fidei Defensor” which is Latin for “By the grace of God, Queen, Defender of the Faith”.

The reverse of this British gold coin features the White Lion of Mortimer standing on its hind legs, with a shield in front of the lion. The shield in front of the lion features a white rose encircled by a golden sun, which represents two distinct badges that were both used by King Edward IV and King Richard III.The words “WHITE LION OF MORTIMER”, “1 OZ”, “FINE GOLD”, “999.9”, “2020” and the designer’s initials “JC” minted around the lion.