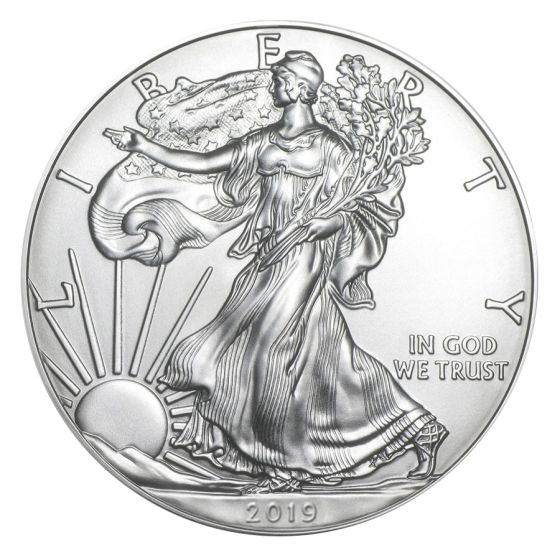 The official silver bullion coin of the United States of America from the US Mint is back with another much-awaited release. These 2019 American Silver Eagles will allow investors and collectors to complete their coin sets while accumulating pure silver in the process.

Thanks to a long history of brilliant releases, the precious metals market continues to appreciate and expect top-notch quality from the US Mint. The mint was established under the Coinage Act of 1792 and is one of the most famous minting institutions in the world. However, the Mint took several decades of expansion before becoming the behemoth minting institution we all know today.

Dating back to 1986, the American Silver Eagle is the official silver bullion coin of the United States.They can only be minted by the US Mint. Moreoever, they're crafted with a minimum .999 pure silver bullion, and only struck in a US government guaranteed 1 troy ounce size. Although Silver Eagles have legal tender status and are assigned face values, they are actively traded on their overall silver content and rarity. This coin program is not only one of the most popular ones out there, it is also one of the longest-running ones as well.

As all these silver coins were minted with the full backing of the United States Government, they are assigned face values and are accepted as legal tender in the United States. Each of these coins contains 1 troy ounce of 0.999 pure silver. Moreover, they carry face values of $1 (USD).

Individual coins come in protective plastic flips. While multiples of 20 ship in official US Mint tubes, and multiples of 500 will ship in US Mint Monster Boxes.

The obverse of these coins feature the Walking Liberty design of the Saint-Gaudens dollar, with a rising sun at the lower right. Liberty is printed across the top, and In God We Trust appears on the right side, below the Y in Liberty. Lady Liberty is depicted walking towards the rising sun with her robes billowing in the wind. She carries olive and oak branches under her arm -- signifying peace and strength.

On the other hand, the reverse features a Bald Eagle, as depicted on the Official Seal of the United States of America, clutching an olive branch in one talon and arrows in the other. In its beak, the eagle holds a banner with E Pluribus Unum on it, below 13 stars. These stars honor the original 13 colonies that came together to form the United States.