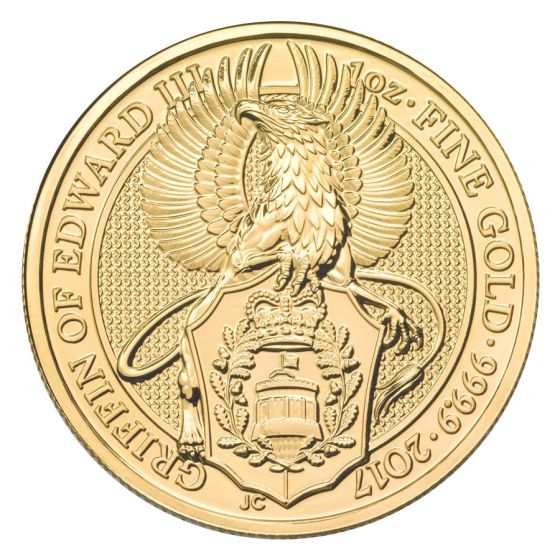 One of the most-awaited bullion Gold coin releases by the British Royal Mint, and the second coin design in the Queen’s beast series, this 1 troy ounce 2017 release features the mythical Griffin.

The Queen’s Beast collection of coins will showcase 10 separate designs, one for each of the beasts that adorned Westminster Abbey during the coronation of Queen Elizabeth II in 1953. This Griffin design is available as a 1 oz Gold coins as well as a 2 oz Silver coin variant.

Jody Clark’s designs have always been appreciated for their level of detail and elegance and his impressive design work on these coins is a testament to his talent.

Every coin maintains its a great appearance as it is available in Brilliant Uncirculated (BU) condition. Additionally, it is struck using 1 troy ounce of pure 0.9999 Gold, making it one of the purest Gold bullion coins in the precious metal market.

The image of the proud Griffin, clutching the front of a shield with its talons, can be seen on the reverse of this Gold coin. Interestingly, this beast is known as the Griffin of Edward III and like the other 9 Queen’s beasts, showcases the Queen’s rich genealogy.

On the other side of this coin, the familiar and fifth portrait of Her Majesty Queen Elizabeth II is imprinted, similar to all other legal tender in the United Kingdom. Moreover, this coin bears a face value of 100 GBP and enjoys the full backing of the British Government.

Going by the coins released till now, all future releases are set to feature beautiful works of art in addition to being imprinted on Gold of the highest purity. Hence, these coins are sure to hold the interest of collectors who wish to maintain bullion coin collections of the Queen’s beast series as well as investors who see the value in the precious metal and intricate design work.

Orders in multiples of 10 coins ship in original mint tube