Crashing Stock Market Into The Election?

It sure looks like "market participants", that is, stock market traders and investors, are getting anxious over the next round of so-called fiscal "stimulus".

When the week began on Monday, the mainstream financial press was reporting that House Speaker Nancy Pelosi had set a hard deadline of Tuesday to come to an agreement between the House, the Senate, and the Trump Administration in order to pass a stimulus bill prior to the election on November 3, but that deadline obviously came and passed to no avail. Today, Wednesday, October 21, 2020, the mainstream financial press is reporting that the Tuesday deadline has been extended, big time.

From Bloomberg (bold added for emphasis and commentary):

"The speaker agreed to continue talking beyond her original Tuesday cut-off, saying an agreement with the Trump administration needs to be done by the weekend to get a bill passed by the end of next week, ahead of Election Day Nov. 3.".

Passed by the end of next week?

That's October 30th, and, more importantly, or less importantly depending on your political views, "crunch time" leading up to what many think will be a highly contested election!

Needless to say, the stock market, as you will see below in the charts, is starting to price-in this political gridlock, and now that we've moved from a supposed "hard" deadline of Tuesday, October 20, to an arguably gentler, "soft" deadline of Friday, October 30, let's just say that it should be a surprise to nobody if the stock market crashes into the election.

The question for stackers and other smart investors is this: If the stock market begins crashing again, will gold & silver crash too and take another trip down to the mid-March lows?

That's not the question, even though many of the technical analysts out there want it to be.

I don't think gold & silver investors will be able to buy gold or silver for much cheaper than they are priced right now when considering "premium creep", which happens when the paper spot price moves lower, but the premium paid over spot rises, essentially negating a lower spot price. Furthermore, depending on the exaggeration of the move down in the paper price, the lower the price moves, the more quickly real, physical gold & silver disappear from dealer inventory and go into hiding! Moreover, if the paper price moves low enough, stackers and other smart investors waiting on an even lower price to make a purchase could, on the net, end up paying more for real, physical gold & silver in-hand if premium creep more than offsets the lower paper price.

We saw the first round of this dynamic back in March, and to this day, across the board, to say that dealer inventory of available gold & silver is "lacking" would be a major understatement, and while premiums have come back down, somewhat, for now, that could all change in an instant.

Nervous "market participants" can be seen clearly in the action of the NASDAQ: 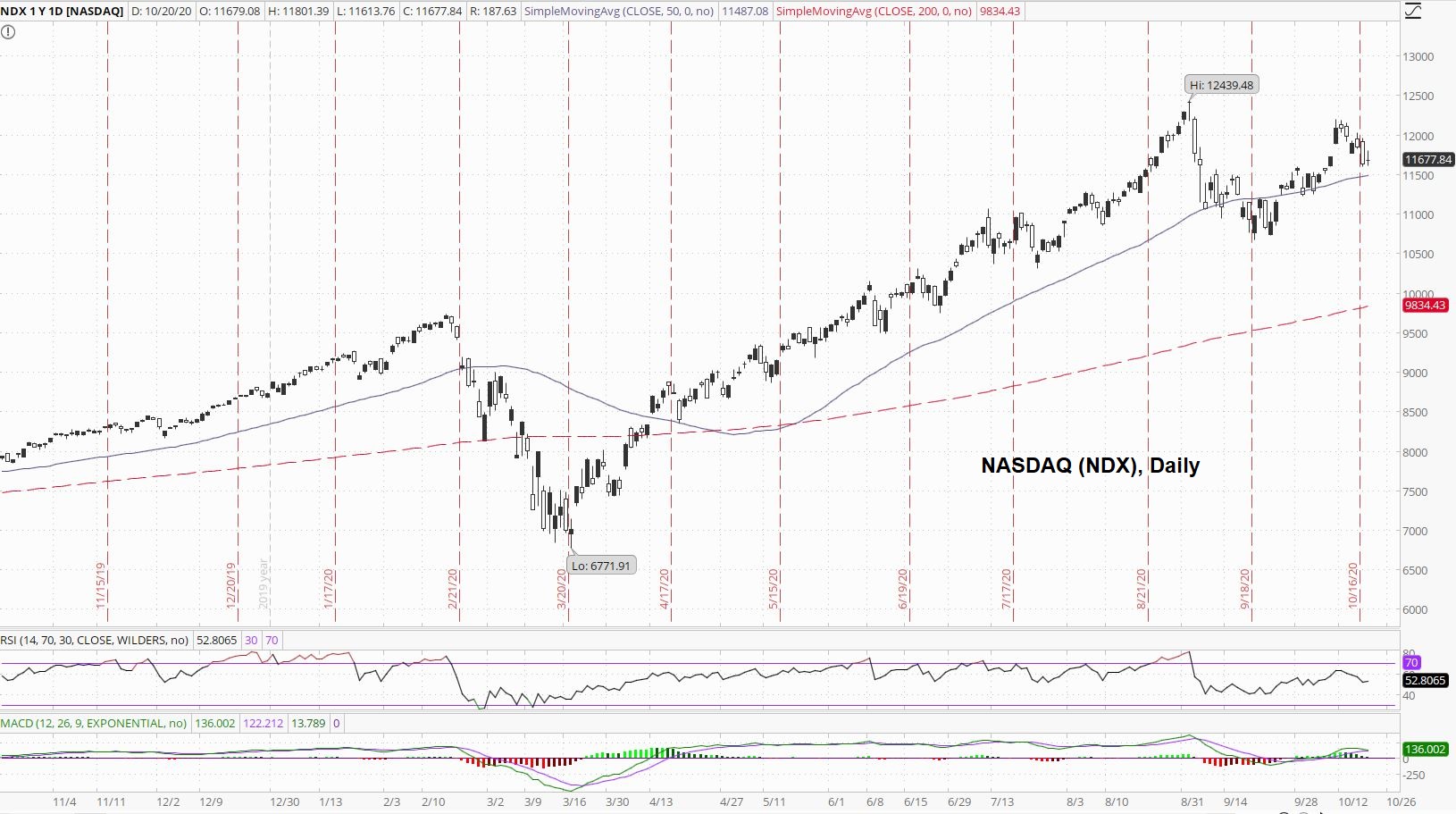 If the charts matter right now, the short term price action is pretty bearish, not to mention all of the big time gap-ups that never got filled during the meteoric rise off of the March lows! 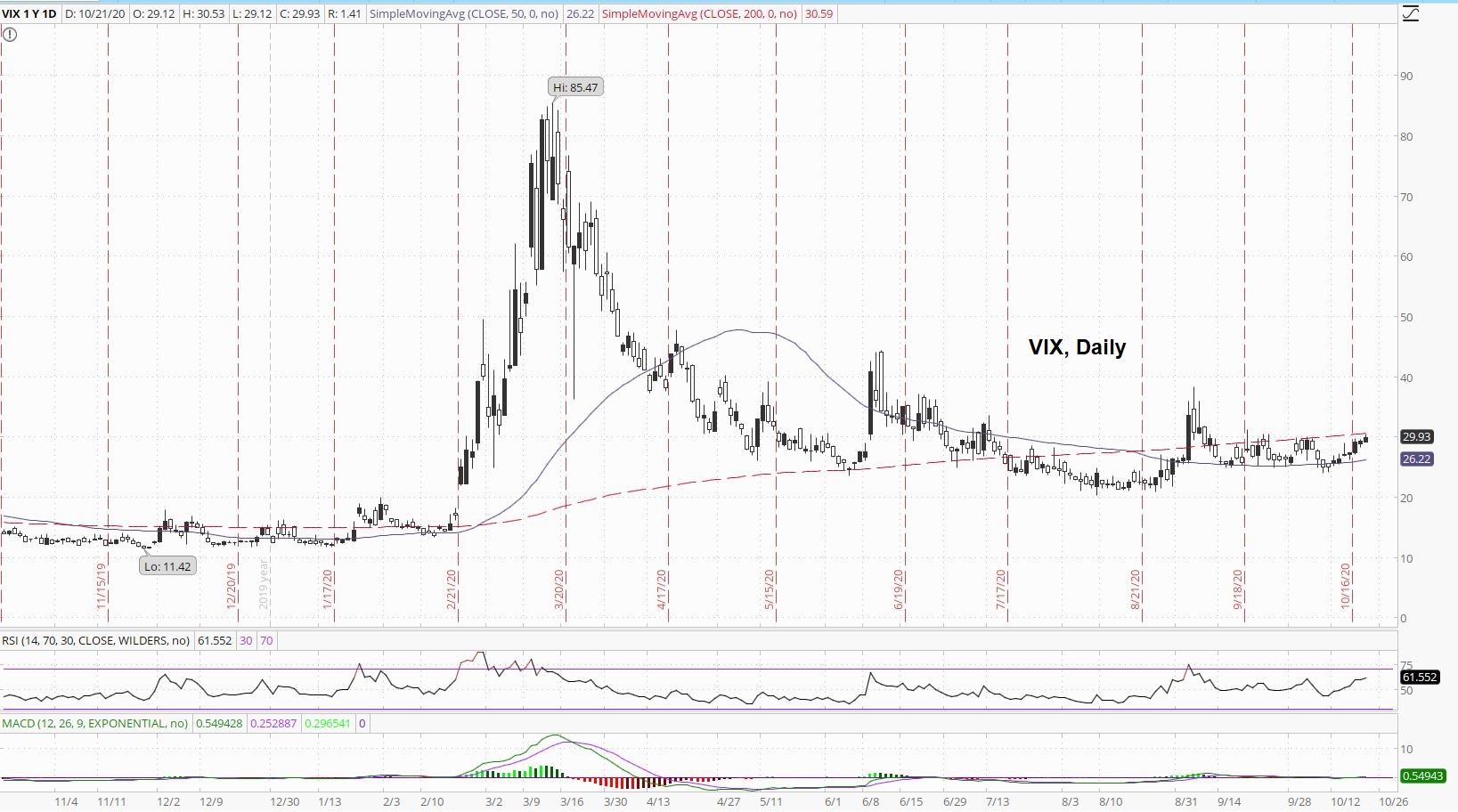 I now think we will see a spiking VIX very soon if not imminently as the signaling of political gridlock is as clear as day. But if we assume fear is not going to spike prior to the election, what's going to happen to fear if it's looking like the next round of fiscal stimulus won't be rubber-stamped before the election, and then the election is contested or disputed in one way or another with no clear "winner"?

One thing that would happen would be an immediate drop in yield: 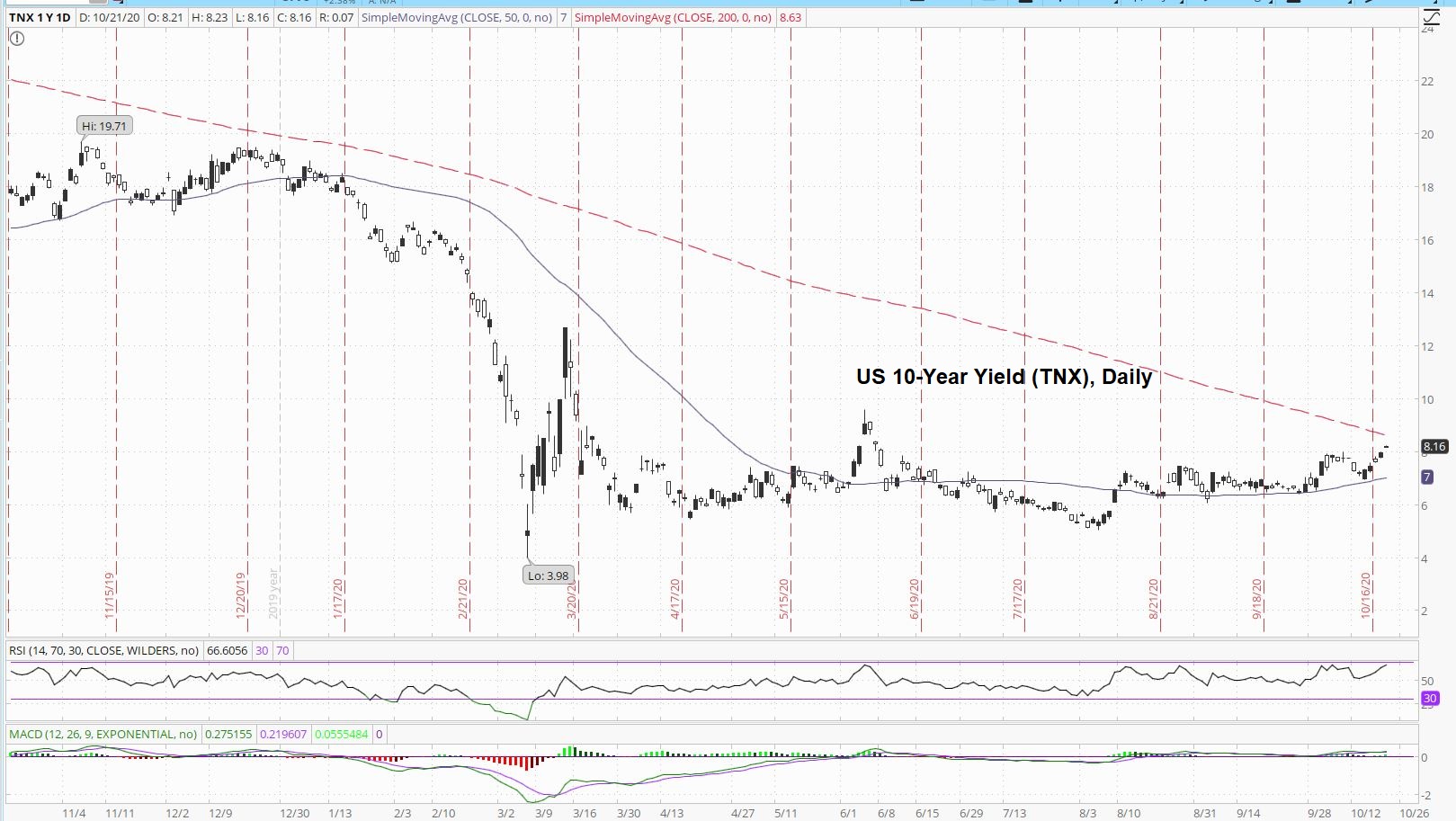 That would definitely get us back into the peculiar rangebound, sideways channel we've been following since - indeed - March!

If you're a dollar bull, this does not look good at all: 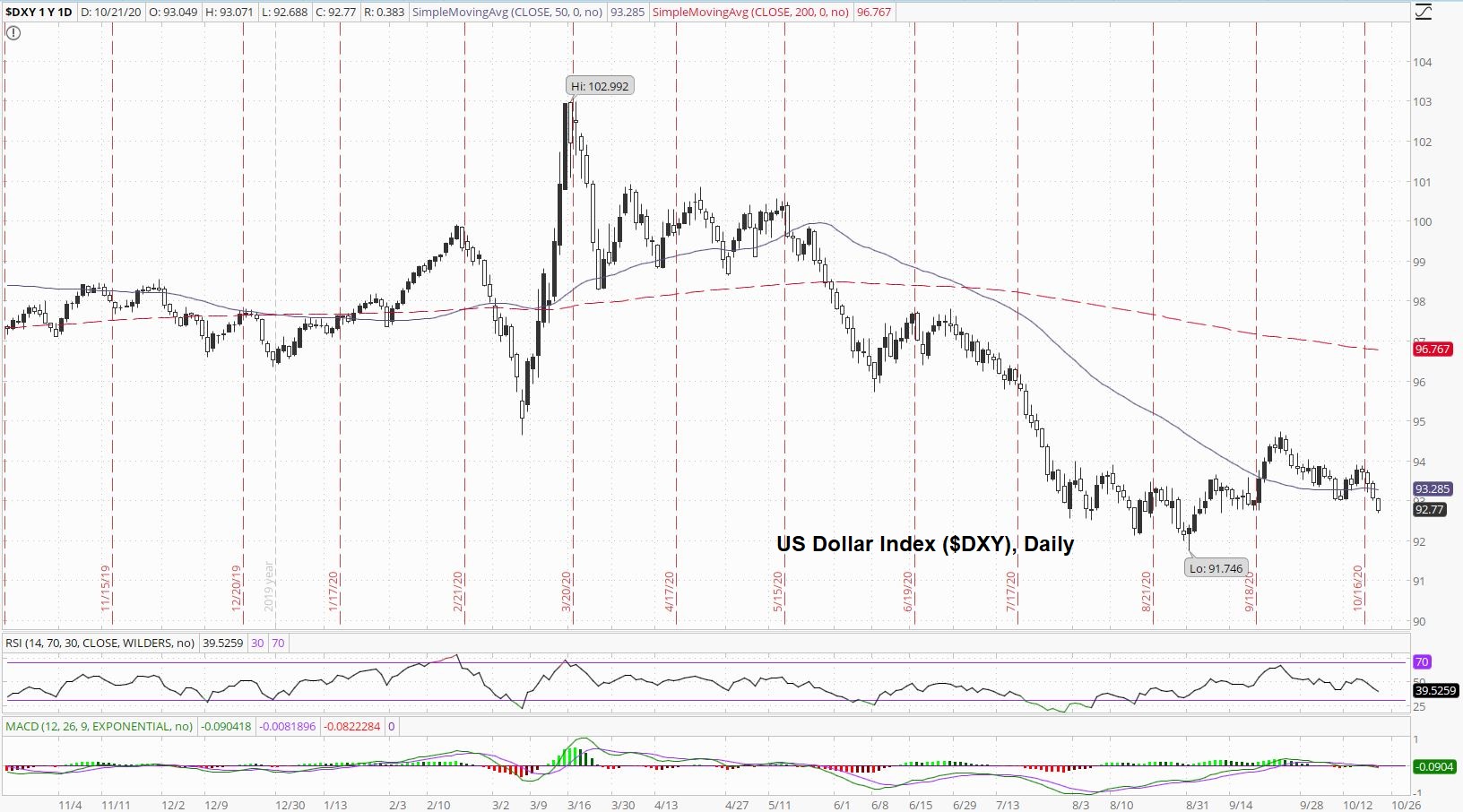 We've turned course in the short-term and are now in a trend of lower-highs and lower-lows!

Crude oil is as flat as a pancake: 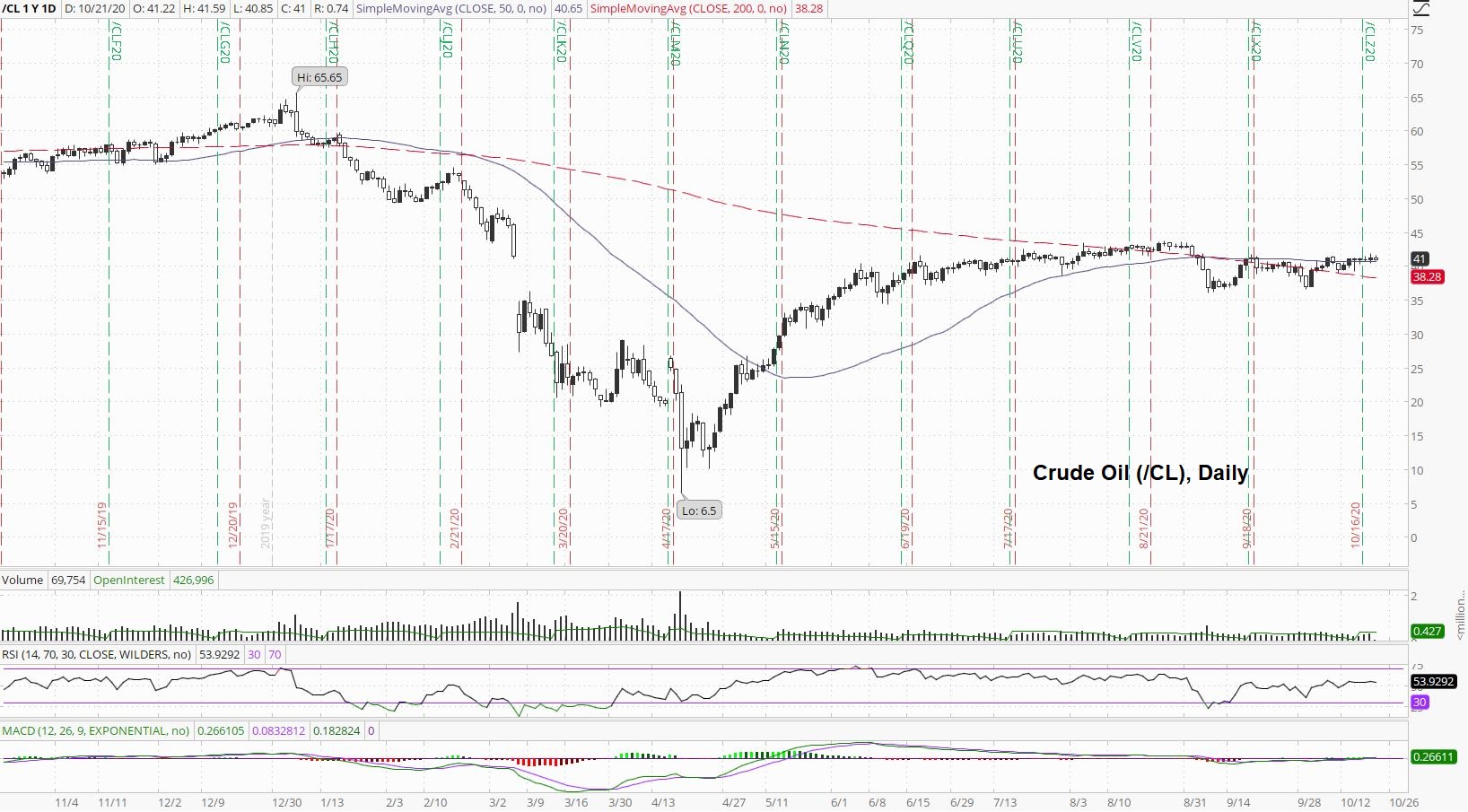 I've been looking for a meaningful move lower, and I've been wrong about that, but it is clear that crude oil consumption is still way down.

I must say, I do find it pretty amazing how steady the price has been as supply and demand dynamics work themselves out!

Copper is breaking out: 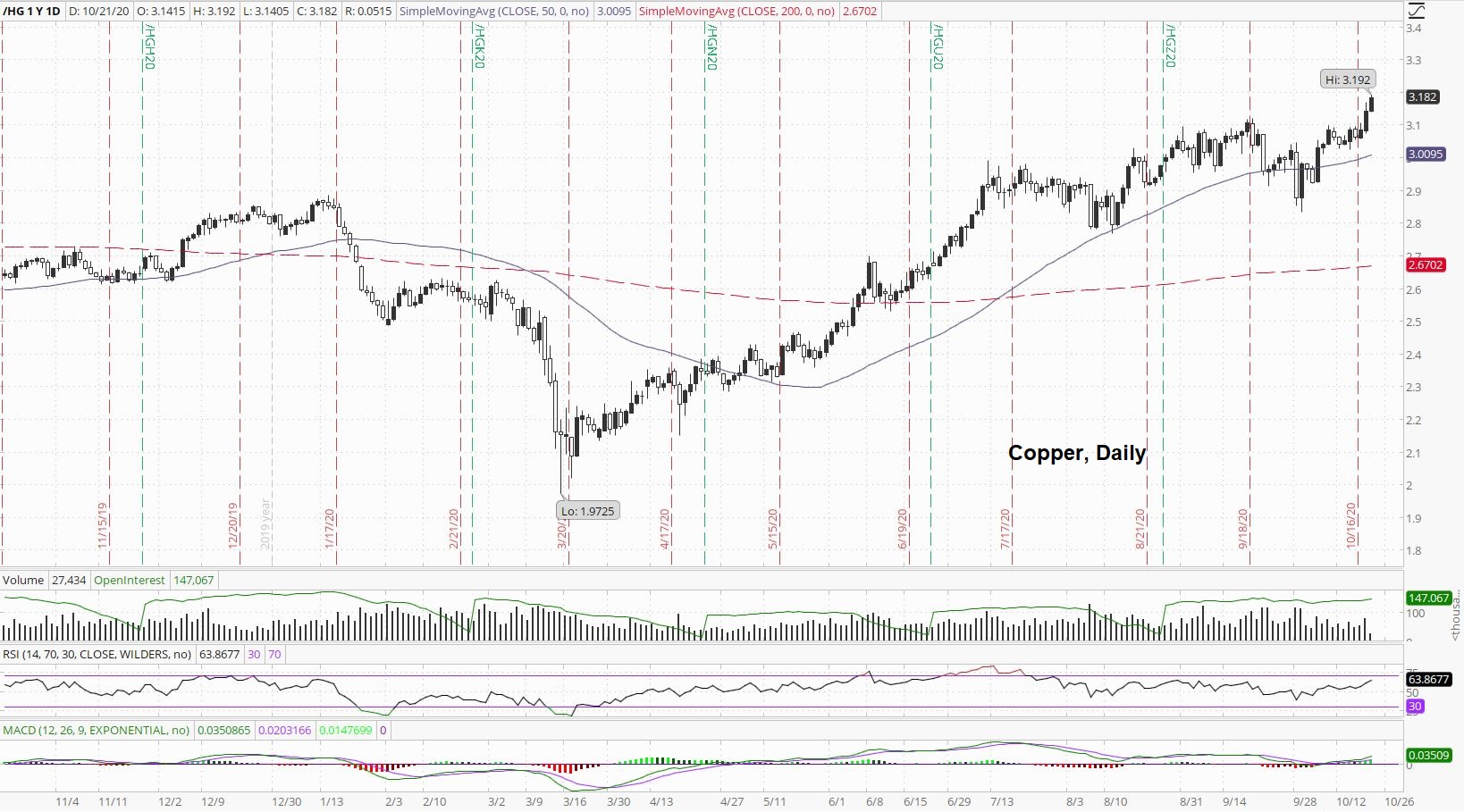 The mainstream analysts will tell you that copper should be falling in price because of the global recession, if not global depression, which is arguably global economic collapse, but what the mainstream analysts do not understand is Gresham's Law and the fact that the US dollar has already hyperinflated!

If you don't understand what I mean when I say the US dollar has already hyperinflated, check out the price of a pre-1933 $20 gold coin, a gold Double Eagle, and you will see that the price is oftentimes above $2,000 (for the $20 face value coin) and sometimes the price is well above a 10,000% price increase over what was initially twenty bucks, only eighty-some years ago!

Platinum, in my opinion, won't be in the red, year-to-date, for much longer: 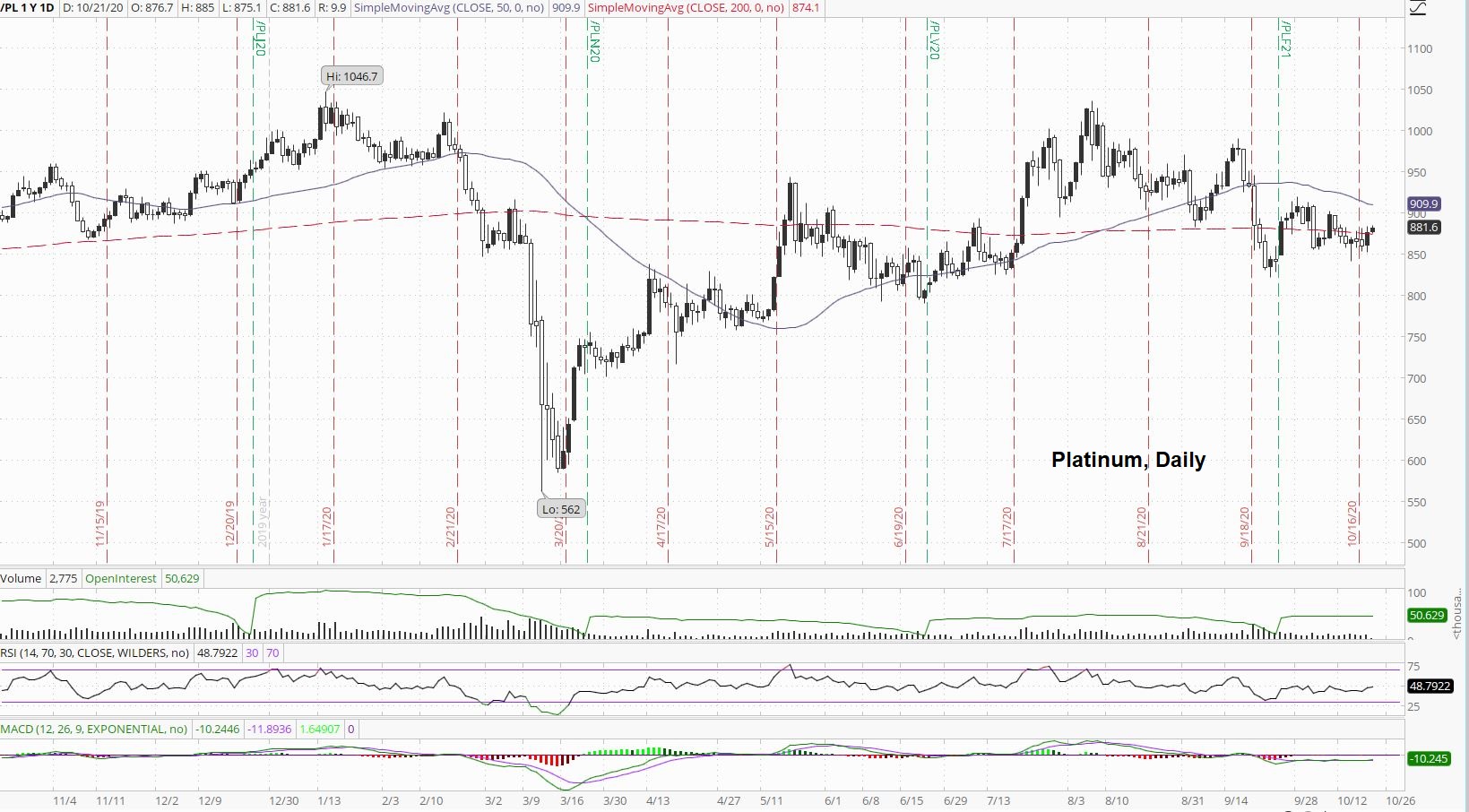 I won't be surprised to see an "upside surprise", and, in fact, I'm actually kind of expecting it. 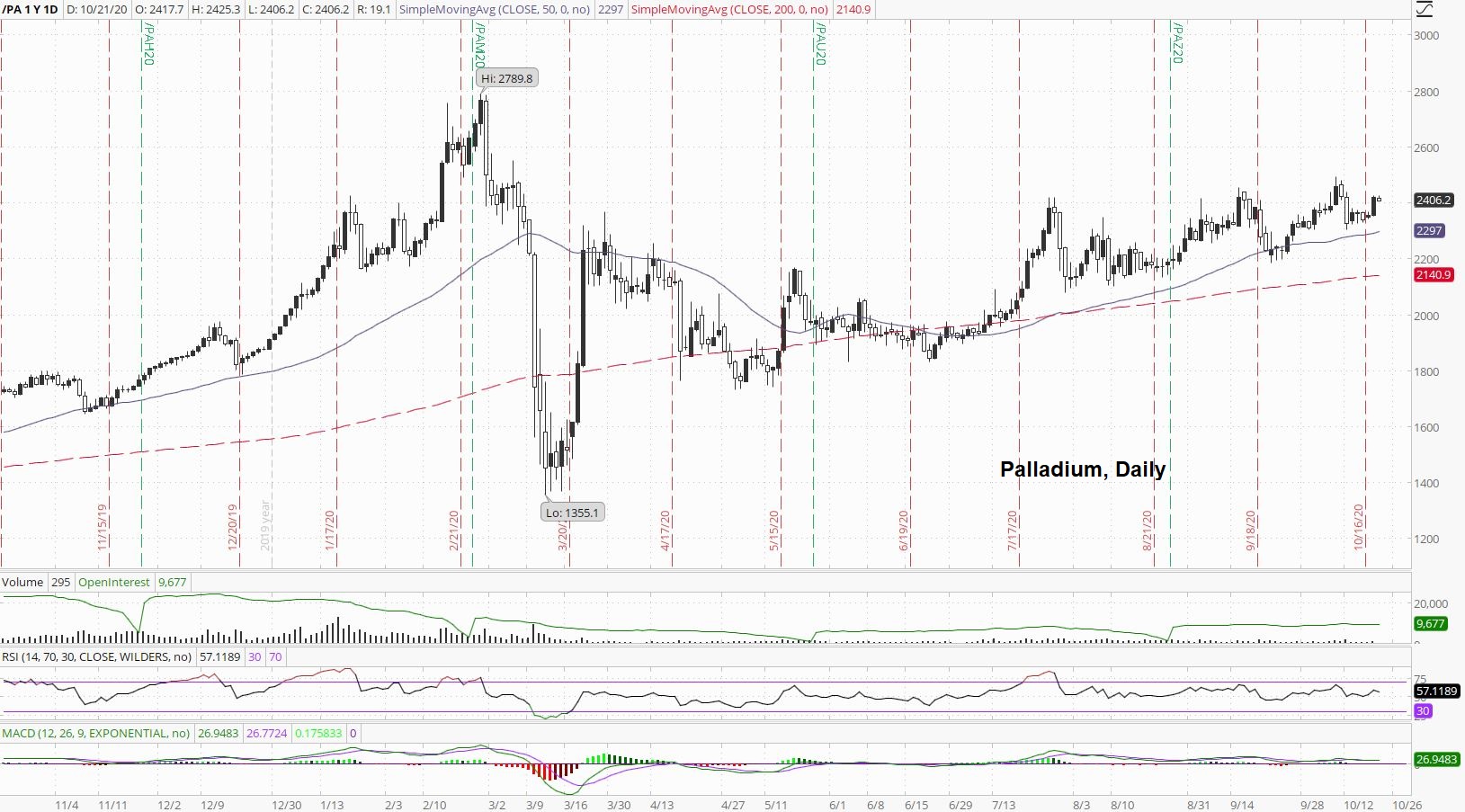 Palladium, in my opinion, will also benefit from a "flight to safety" move, as will all four precious metals, but I've been looking for that move to happen in palladium once the other three precious metals catch up in price, and so far, that's been the correct call. 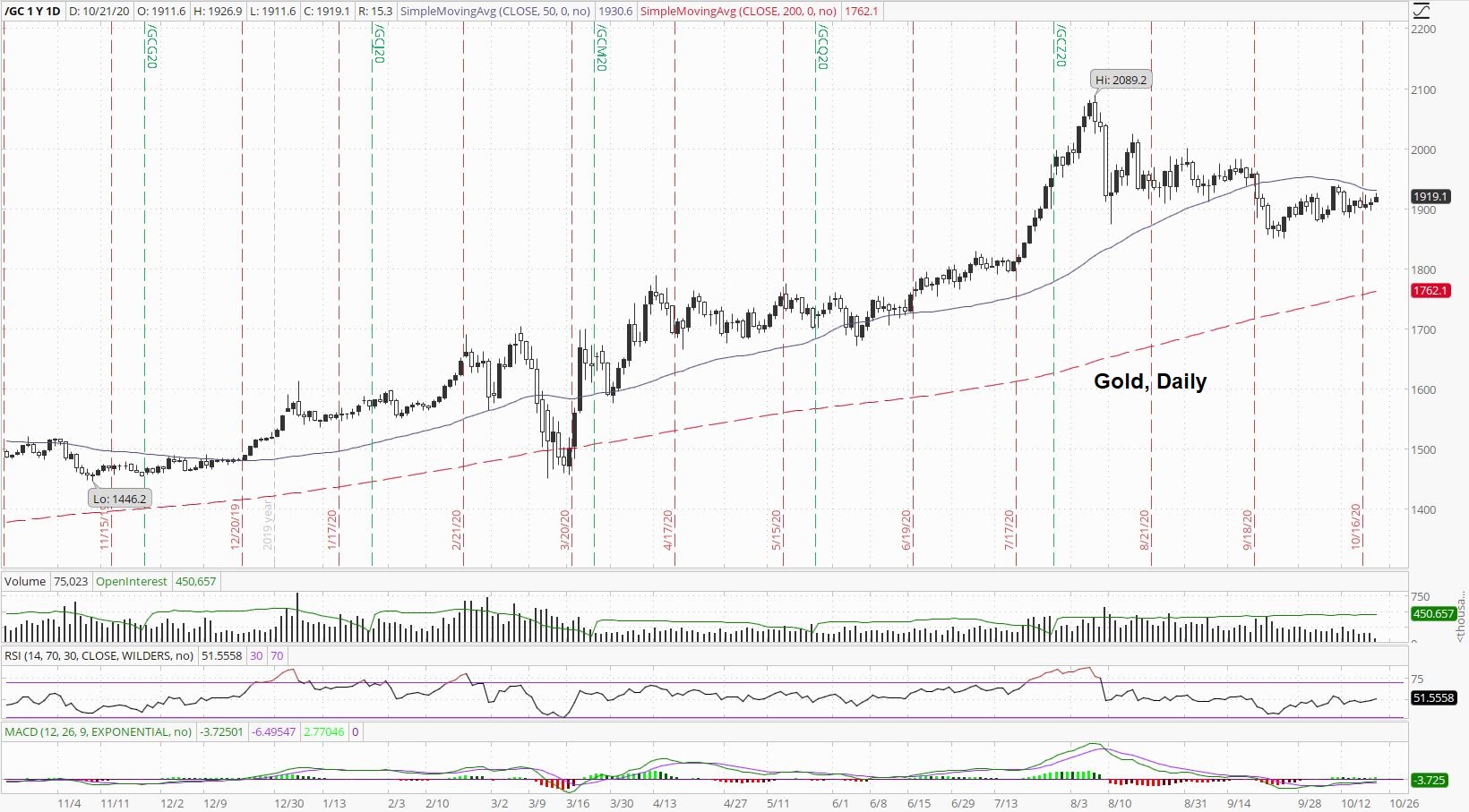 Smart, legendary investors say "buy gold at any price", but if $1900 is now the price floor, the question is do we take the stairs up, or the elevator?

In silver, I think it's going to be the elevator up: 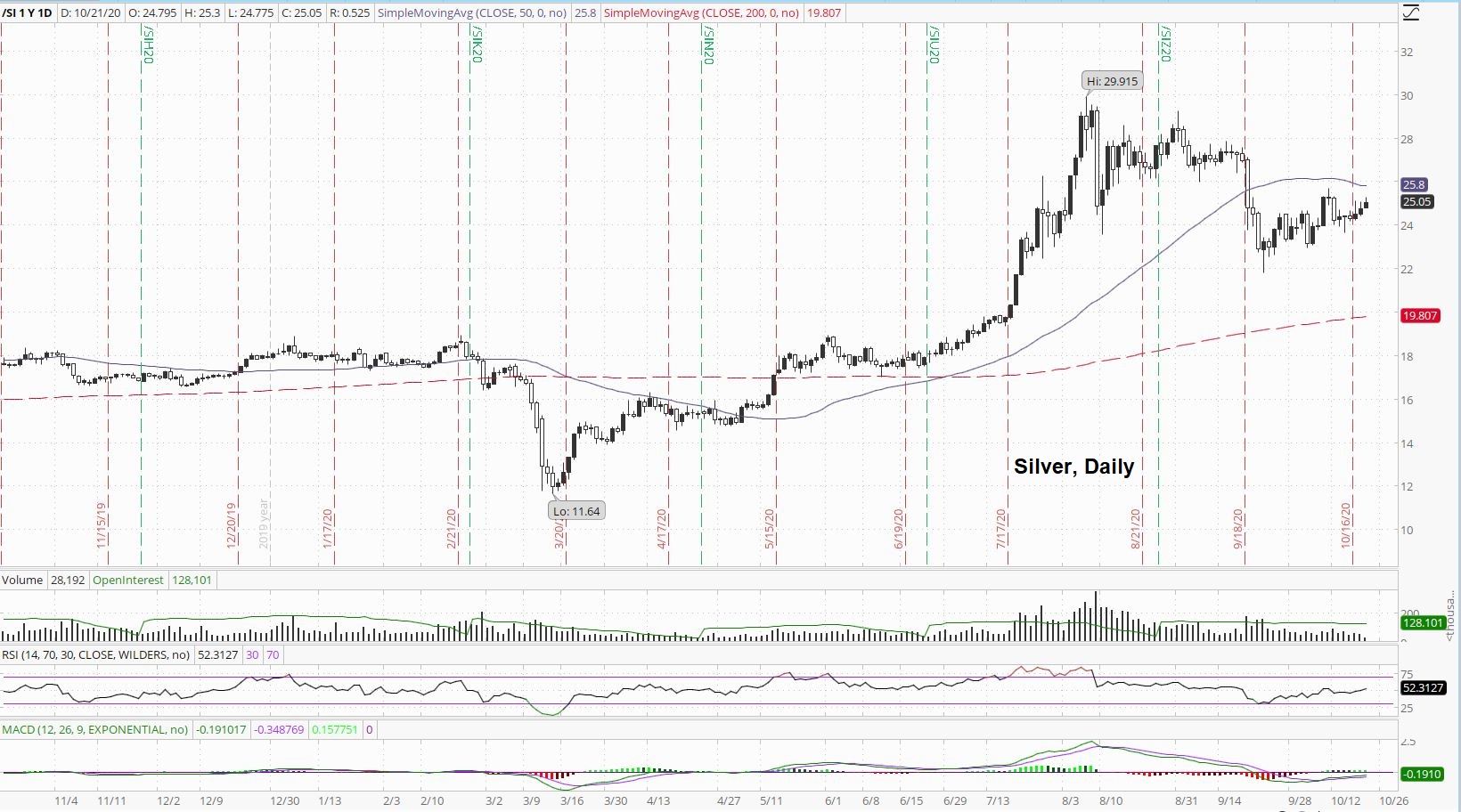 If it is true that there has been an active price suppression policy against silver, conducted by governments, central banks, and agents acting on behalf of one or both, then silver is nowhere near it's just, proper valuation.

Which means those stackers and other smart investors taking advantage of the "gold to silver ratio arbitrage" won't have to wait long to be rewarded: 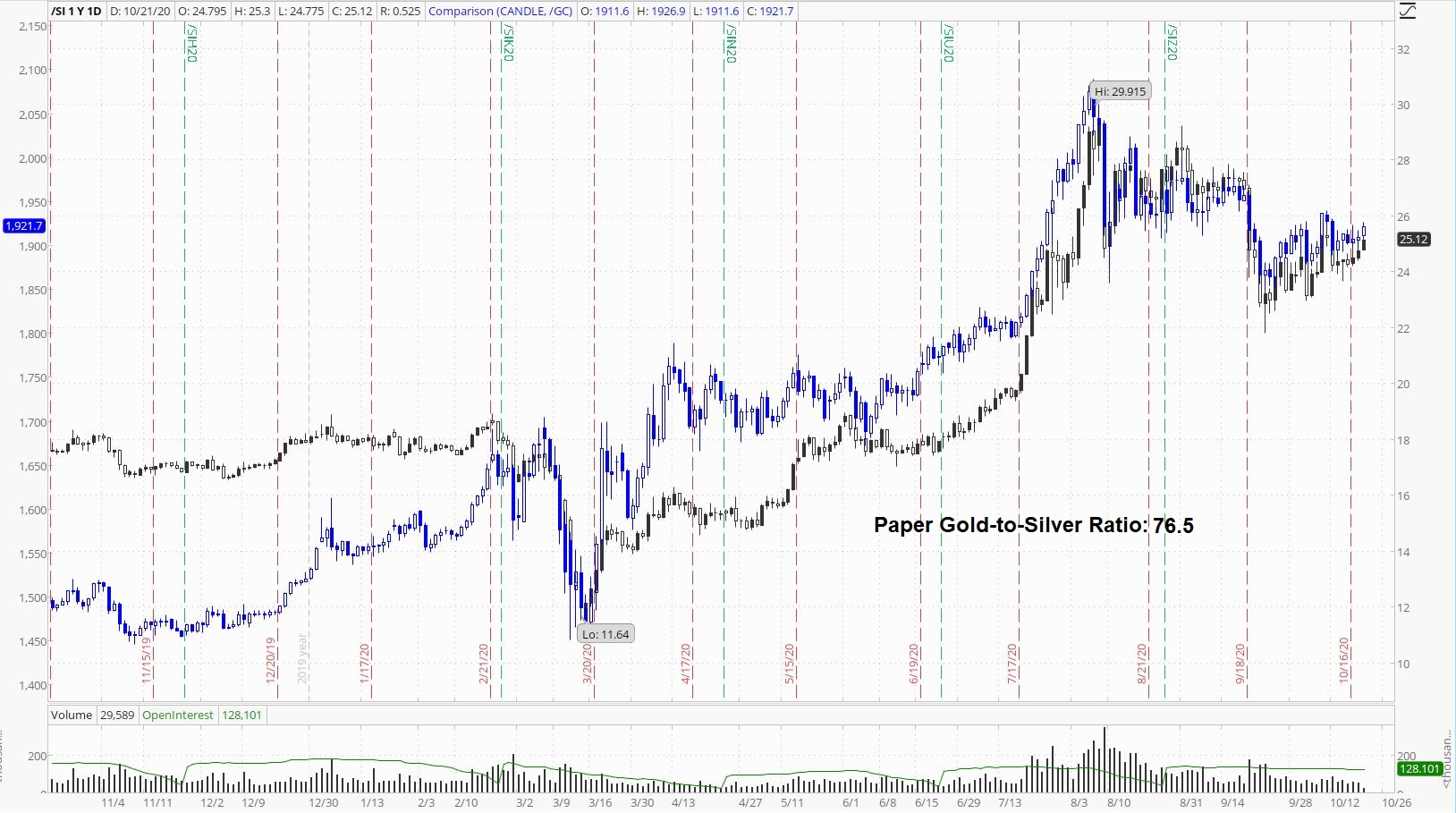 The opportunity is there, for now, but it won't be for long.