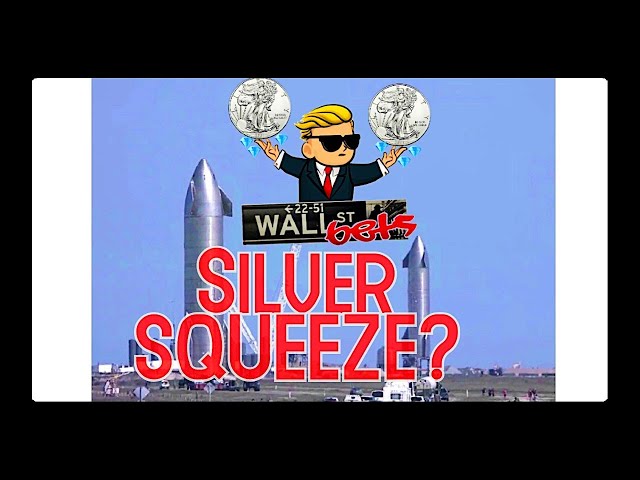 Is a WallStreetBets Silver Squeeze Possible?

The short answer is yes.

If we collectively make a run on physical silver bullion, a short squeeze of our upsidedown inverted pyramid of phony derivative silver price discovery falls apart.

And we wholesale/retail bullion buyers, and even 1,000 oz silver bar buyers, begin to meet shortages in all immediately deliverable silver bullion formats at a reasonable price premium near futures or spot silver price derivatives.

Ongoing short squeezes, allegedly produced by young WallStreetBets' subReddit stock market traders, basically slapped the face of many in the Wall Street establishment. GameStop closed the week up 400%, while the S&P 500 suffered its worst week since October 2020.

And what an interesting week it was for many of the younger traders on the long side of the GME bets.

This week, we're not only doing a dig into this chaotic and super interesting story.

But we're also going to examine, how many in the WallStreetBets subReddit crowd, are beginning to explicitly yearn for a coming short squeeze on the global silver commodity market.

How realistic that is today and going ahead?

Have we ever seen events like this in Silver history?

The answer is yes, and yes.

Personally, I spent the last few months reading through some loveable WallStreetBets (WSB) posts and memes.

Creative and clever those youngsters are, we have reason to be optimistic.

I have found a new financially entertaining bookmark for years to come.

There are now 7.5 million people subscribed to the WallStreetBets Reddit forum. Tenfold what it was not long ago, perhaps this is what is also coming to the silver price and real value.

Like last week when fiat billionaire and alleged insider trader, Leon Cooperman forgot how to read the room, and skillfully speak on bubble vision.

Another fun thing WSB allegedly does is to use complacent “rigged financial shearing systems” to their pack’s advantage. Now that some of the WSB players have done so via hundreds of multiples in their bets, look for more coming from the now nearly eight million degenerates in their internet forum.

Hundreds of thousands of young Gen-Z and Millenial stock traders use their subReddit forum to discuss openly ideas on how to make leveraged bets in the stock and options markets in order to make outsized returns.

Collectively they on their own targeted floundering heavily shorted stocks like Gamestop, AMC, and Nokia as short squeeze targets. By placing long options call bets they force market makers to cover their hedges and this phenomenon once feeding upon itself can force those that are naked shorting the stock to have to go out and into the open market to buy the shares.

The kids in mass “hold the line”, refusing to sell their shares for fiat profits, using their “diamond hands” to ensure they hold for maximum gains. This forces the stock price up to the moon in an exponential fashion as the shorts bleed losses day after day in their margin accounts until they find bankruptcy.

One of the more amazing parts of this story and the screenshots of his account over the weeks has been how little he has sold off so as not to crash the move in the stock while also maintaining pressure on the still scrambling shorts.

Just after the middle of the week, front running data selling "freemium brokerages" like Robinhood and others briefly halted long buying for short squeezed stocks like Gamestop, AMC, and others.

The WallStreetBets crowd understandably jeered stating the naked shorts were rigging the casino rules to slant the table to help them out of their ongoing losses.

One of the most outspoken of the new younger stock trading crowd, David Portnoy was on Fox last night with Tucker Carlson, explaining why this was such an egregious situation in his view.

Late this last week, Robinhood and other brokerages shut down retail Gamestop ($GME) buying (and other stocks and ETFs like $Ag & $SLV).

An important lesson for these young investors and speculators to learn. When playing stock or derivative casinos, rules can and will be changed to serve the interests of ownership or those violent monopolists (i.e. sovereign governments) who allow casinos to even exist.

The Hunt Brothers January 1980 scapegoating in the silver market is one point in silver manipulation history the downside. Comex back then abruptly changed the rule to liquidation orders only, and then margin requirement hikes took the Hunt Brothers accounts to bankruptcy and a billion fiat Fed note bailout by the Federal Reserve.

So the question still stands, can this happen?

Can a short squeeze on silver occur in the 2020s?

The answer is yes.

A confluence of targets with high capital flows could certainly help produce a short squeeze on physical silver and then ultimately the silver spot price will rise after bullion product premiums blow out.

Short squeezes have happened in Comex silver and not in the too distant past.

JPMorgan's precious metals desk literally inherited Bear Sterns' bankrupt carcass, as well as a few of their alleged best criminal silver spoof traders. All of whom likely made a killing during the global financial crisis shorting silver down from $21 to a low in the $8 oz range right around when the first injection of QE∞ began.

JPMorgan's silver desk in later 2010 and 2011 got caught flat-footed, likely naked short #SilverSqueeze'd as silver ran from the teens to its seemingly ancient $50 oz high mark tripling within about 1/2 yr of time.

At the time JPMorgan had no Comex silver warehouse, and likely got caught flatfooted with incoming demand from outspoken short squeezer like Max Kieser's Crash JP Morgan Buy Silver campaign.

So JPMorgan knowing 1st hand that silver can kill???? leveraged naked short desk, went out and became the largest modern-day silver stack over the last near-decade of time.

The bottom line is JPMorgan's precious metals desk likely remains an alleged criminal trader trained greedy bunch. Seeing them front-run the coming commodity bull market with a raging silver price is not out of the question. And given that they likely have large swaths of silver to lease or sell at large premiums, they are in the driver’s seat if a legit wholesale 1,000 oz silver bar short squeeze sets off in this global silver market.

Silver to Past $50 to Triple Digits?

The Gold-Silver Ratio is back into the high 60s, technicians I respect tell me it can fall quickly to the middle 50s. Judging by the severity of the falling slope and the technical and fundamental setup for silver. I have no doubt that could happen sooner than most might think possible.

Finally, if you want to hear more from me and my thoughts this past week, there is an interview I did with Palisades Radio below.