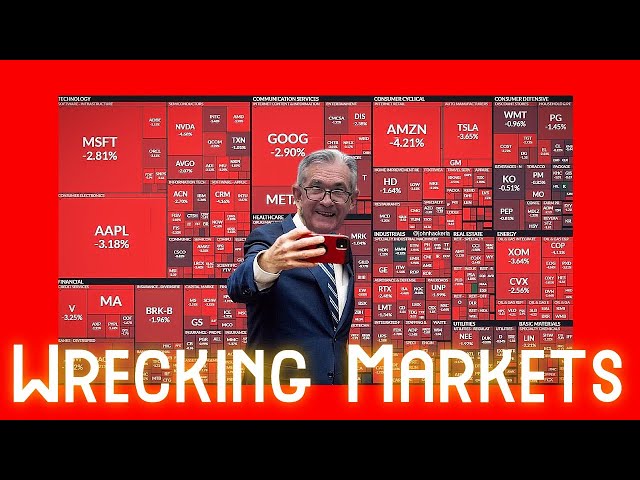 The Worst Year Ever to be a Bond Investor?

Last week's substantial financial market selloffs continued as the fiat Federal Reserve raised its Federal Funds Target Rate again by 75 basis points. While we continue to read headlines about raising rates by central banks led by the fiat Federal Reserve, the bigger story constant here is the speed at which they are moving to raise interest rates.

In 2022, relative continued strengthening by the still world's dominant fiat currency has produced massive selloffs in most commodities and precious metals and unprecedented losses in the world's largest financial asset classes like stocks and bonds.

The fiat US dollar index had another massive jump this week on the rate rise, climbing above parity versus the fiat euro to close this week, nearing a 20-year high relatively in that fiat currency pairing.

And too, when comparing the fiat US dollar versus the world's still oldest fiat currency unit, the fiat British not sterling silver anymore pound—now nearing an over 50-year low versus the US dollar. You have to go back to the Plaza Accord to find a time when the fiat pound was this weak on a relative basis.

Turn now to the largest asset class in the world, bonds. Jim Bianco said the following this week on CNBC.

The silver and gold spot price markets sold off this week to strengthen fiat US dollar terms.

Looking at the spot gold price technicals, we can see a recent fall through nearly two years of support. About 200 bullion and precious metals interested followers took part in a Twitter poll I ran this morning as the spot gold price sold off to start the day's trading.

Chances are high that since you likely buy bullion, you are a contrarian by nature, so this week's headline in the Wall Street Journal claiming that gold has lost its status as a haven is the kind of stuff you want to see for an eventual sharp rebound.

With rapid central bank rates rising, many expect an inevitable breakage of something in the financial markets. We'll see how gold responds when fear returns to disorderly markets, and central bank policy shifts are required.

When looking at the current silver spot price chart, technically, it has been a bit stronger than gold of late, but silver needs to blow past $22 oz to get momentum traders betting long again in a significant fashion. For now, silver is on sale, and physical silver bullion continues to get taken from large exchange warehouses.

COMEX registered silver dipped to 43.5 million ounces by the end of this week. The shrinking trend in deliverable silver bullion piles on the US east coast and London continues.

Indian silver bullion import data for last month came in this week, with India taking over 30 million ounces in August 2022 after their record-sized July off-take. As I had suggested last week, that is about 90 million ounces in only two months. And already, over 200 million ounces through August of this year headed to India alone.

Most of that silver bullion is coming from the United Kingdom and likely a lot of it out of London silver warehouses and unsecured silver ETF holdings.

Finally, another sign rhyming with the 2010s was when China imported record size amounts of gold kilo bars from Switzerland. Last July 2022, over 80 tonnes of gold bullion left Switzerland, headed for Chinese gold bullion and jewelry stacks. That is the second highest amount of gold exported from Switzerland to China since 2012.

In a further illustration that the Chinese are aggressively buying this ongoing gold spot price dip, premiums paid on bullion in Shanghai are now near +$50 oz over international spot prices as a revival in demand outstrips the country’s current gold bullion import supplies.

If you are fortunate to be enjoying relatively strong fiat US dollar buying power right now, take advantage before this powerful trend eventually turns the other way, perhaps in violent fiat debasement versus bullion fashion.

As we move onward to our rapidly changing financial system's structure, prudent ownership of proven haven assets like gold will shine and remind the world that gold remains safe haven money to hold for the long term.

Thank you for watching this week's SD Bullion Market Update.

And as always to you out there, take great care of yourselves and those you love.