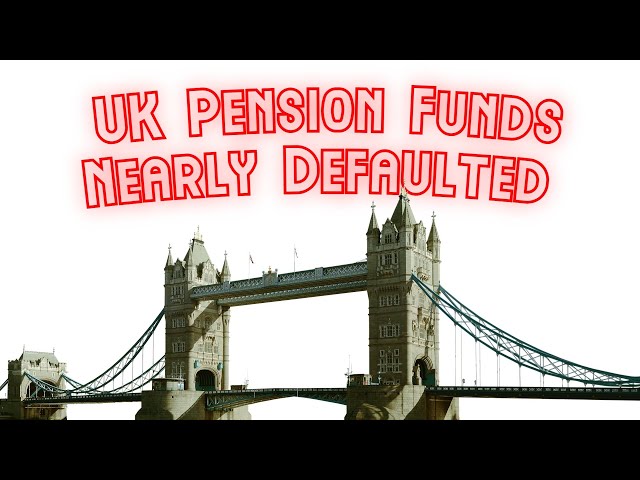 Bank of England Stepping in to Bail Out UK Pension Funds

The United Kingdom's debt market and the fiat British Pound took further historic losses this past week as the pound spiked downwards to an all-time low versus the fiat US dollar. The Bank of England had to intervene and begin buying its debt as it faced systemwide pension defaults if it had not done so.

Kerrin Rosenberg, Cardano Investment chief executive, stated, “If there was no intervention today, gilt yields could have gone up to 7-8% from 4.5% this morning, and in that situation, around 90% of UK pension funds would have run out of collateral. They would have been wiped out.”

As the fiat Federal Reserve continues hiking rates faster than at any point in the last four decades, it seems like a weekly news item that something blows up somewhere in global financial markets.

Since the 2008 Global Financial Crisis bailout era kicked off, the percentage of US companies that are effectively zombie companies, those whose debt servicing costs are higher than their ongoing profits, has zoomed to more than one in five are not profitable.

And so ask yourself, how might these companies be fair if rates continue to climb in the USA? How many large company bankruptcies might we finally see in this recession?

The silver spot prices closed just above $19 oz, while the gold spot prices ended above $1660 oz this week.

The gold-silver ratio stayed flat at 87.

We are looking at a monthly chart of gold priced in fiat US dollars where this year's selloff in nominal price is evident of late. But if we look at the gold price in fiat British pounds, the story seems a bit different.

Similarly, in fiat Japanese yen or even in fiat Euro notes, the nominal price of gold has been much more robust, illustrating that gold remains a bedrock store of value during devaluing turbulent financial market durations.

This week, the fiat Chinese yuan fell to nearly 15-year low levels versus the fiat US dollar.

The US stock market continues to take losses near record levels in percentage terms. Through 187 trading days into the year, only the high stagflationary year of 1974, the 1931 Great Depression, or the 2002 stock bubble into the bear market performed worse on a percentage basis to date. The S&P 500 is now down nearly 24% on the year.

This horizontal chart shows you how that stacks up visually since the 1930s Great Depression.

Adding insult to injury is the simultaneous bear market in bonds making ongoing losses for the 60/40 portfolio at Great Depression loss levels thus far in 2022.

The 2000 stock bubble bear market lasted 31 months, and we are coming off the most gigantic stock bubble of all time fairly recently. We've only been in this bear market in paper asset classes for about eight months. An official recession has not yet been declared; given historical data, this bear market could continue for years.

In a sign of what the fiat financial powers are trying to achieve underneath all the ongoings, it is a secular long term attempt at inflating away the record nominal debt levels we have accrued until now.

When measured against the US economy of the United States GDP or gross domestic product, America’s public debt is setting up to post the most significant drop in at least two decades. This is achieved by having real price inflation in the teens while paying interest rates still not far from zero.

Billionaire investor Stan Druckenmiller was interviewed this past week about the still staggering size of US unfunded liability levels, which at their net present value of nearly $200 trillion completely dwarf the now near $31 trillion in debt the US has accrued to date.

Listen to his sober take as the world quickens towards an eventual sovereign debt crisis crescendo to come.

Bullion buyers intuitively know the hundreds of trillions of underlying fundamental factors likely to store value and drive bullion values higher in the years to come.

Those who can afford to are increasingly buying silver bullion at record-sized rates.