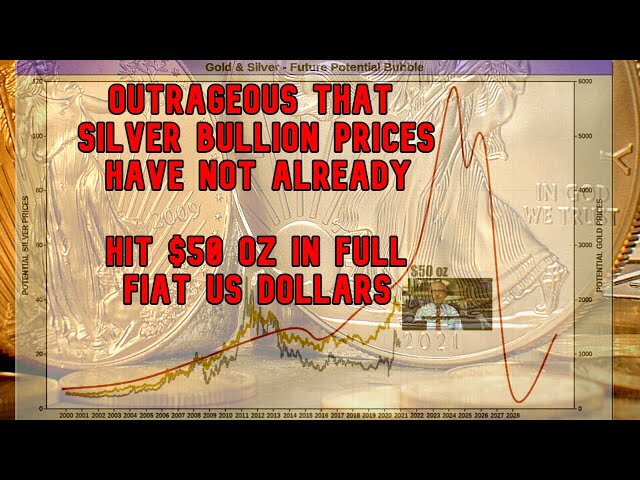 Ole Hansen, the head of the commodity strategy desk at Saxo Bank, dropped a bullish silver forecast for 2021.

This week, we’re going to dig into what more he and his research team had to say on the matter, other than that short clip I borrowed and overlaid some charts on for context.

Of course, we’ll also add some of our own more detailed short and longer-term contributing factors for silver bullishness 2021 and beyond.

While perhaps both early 1980 and 2010 silver bulls watching this video might be rolling their eyes right now at yet another bullish silver call.

We are going to examine a few critical, contributing, and fundamental rhyming factors at play.

Ones that Ole and team Saxo Bank did not go into much detail over.

First, in this viral bailout and central bank fiat currency explosion era happening now. Let’s begin with silver as a store of value monetary demand. We all know the cliché is that silver is the poor man’s gold.

And when gold gets into a raging bullion bull market as its value rapidly rises, silver eventually often outperforms gold over a short few year time frame.

Our friend over at SRSRocco Report published this superb chart, which puts this year 2020’s silver store of value demand into record-breaking industry context.

I am personally speaking throughout my over dozen years working in the bullion industry and studying physical silver and gold flows.

The prior year with a massive allocation of silver supply going to physical investment demand was in 2015.

Back then, only a handful of years ago, about 1 in 4 ounces of annual silver supply flowed to store of value and investment demand.

Here in 2020, that figure appears to have doubled.

In 2015, it was mainly poor man's silver bulls with strong hands buying bullion and jewelry for the long term. Think of unhedged eastern Indian silver jewelry makers and regular western silver bullion stackers buying heavily and regularly. The silver spot price was bottoming out over many months in 2015.

In late 2020, Ole Hanson and Saxo Bank failed to ask readers what happens next year if Indian silver demand reverts to its 2010s average?

If so, then Indians alone would need over 100 million ounces or more physical silver in 2021.

And yea, they'll get to bid against increasing western silver investor demands and likely increased Chinese, EU, and potential US solar demand, all ramping up.

Of course, the majority of this supposed 2020 silver bullion demand flowed to supposedly silver-back ETFs. A large swath also increased the unaudited COMEX warehouses. For many months this year, the front-month silver futures prices hovered well above the then spot price, attracting an arbitrage opportunity for players in that fractionally reserved futures market.

Let's look back at what mainly fueled that 2010 and 2011 ramp in gold and silver values.

I would argue that much of the then bullion price escalation was due to the rapid expansion of the fiat Federal Reserve note's monetary base and Federal Reserve balance sheet via QE1 & QE2.

All this also coincided with bankrupt Bear Sterns inheriting JPMorgan, who was allegedly caught naked short silver on the COMEX (see the video there at the 9:06 mark for the backstory). Thus we witnessed a short squeeze 2010-11 that nearly took that bank's precious metals trading desk under.

Fast forward about a decade. The M1 monetary aggregate pile is now exploding, yet without a legit explanation of what is going on; why is this rate of fiat US dollar pile growth bursting at record levels making the 2008 to 2011 ramps look like child's play?!

Oh, and by the way, alleged precious metals market rigging JPMorgan and their clients appear to be ready to gain from silver's likely short squeezes upcoming.

This nearly 200 million oz pile is two times what physically the supposed silver market cornering Hunt Brothers amassed before silver did its first run at $50 an ounce in January 1980.

None of this takes into account how much silver the bank has siphoned and or lent back to the largest silver ETF as they are the custodian of the world’s largest supposedly silver-backed ETF called SLV. The lease rates could be massive already, and reports already are that JP Morgan is making a mint in the precious metals market in 2020 alone.

Ole and Saxo Bank's $50 oz silver in 2021 call is something they deem an “outrageous prediction.” There is nothing outrageous about the silver price doubling, tripling, or five-folding, especially when faced with such rapid expansions in fiat Fed note piles met with increased silver bullion and ETF demand response. All while silver’s industrial demands are likely to ramp same time upcoming.

The most outrageous thing is how still cheaply priced silver remains, faced with all these ongoing bullish facts buildings.

Whether it be next year or the years following, silver is not only going to $50 but beyond as this systematically suppressed red silver spot price line catches back up to the eastern world's aggregated five-decade price, which is well into the triple digits per troy ounce already.

Mind that current gap silver bulls. It is a genuinely outrageous opportunity at hand.