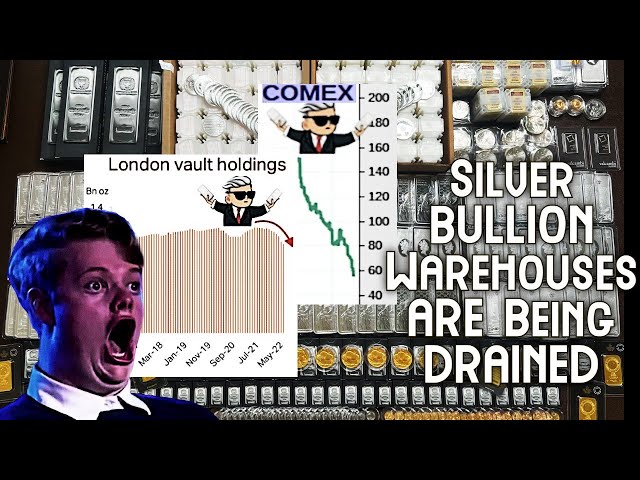 Silver spot price weakness, especially over this past month of July 2022, has only added to increasing physical silver off-take and demand pressures worldwide.

Global silver mining supplies are just not keeping up with ongoing demand, so silver is being withdrawn and sold at premiums from places like London and silver COMEX warehouses.

Since the early 2020 pandemic-driven gold and silver bullion shortage arbitrage, and especially following the late Jan 2021 Reddit WallStreetSilver SilverSqueeze phenomenon kick-off, the persistent demand for physical silver bullion specifically has had near no let-up, spiking in strength, especially when silver spot prices fall as they have recently.

Confirmed by ongoing data, supposed silver warehoused in London has not been at levels this low since early 2016. Having now rolled over nearly -200 million ounces from its peak just after the Silver Squeeze kicked off in earnest in early 2021.

To better break down the silver bullion bar hoards supposedly sitting in London, one must first acknowledge that the vast majority of that London silver is supposedly unsecured ETF and ETP silver trust holdings. BullionStar's Ronan Manly points out that about 2/3rds of this gray matter on the chart is reportedly SLV silver, the world's largest unsecured silver ETF custodian managed by alleged criminal RICO precious metals spoofing bank JP Morgan.

You likely recall the ridiculous SLV prospectus change in early 2021. When the trust began disclosing to its unsecured shareholders (who own nothing but a silver spot price mimicking derivative) that the trust might not be able to get silver bullion if global demand gets too intense. So basically, good luck as you underperform virtually any piece of silver bullion owned directly by investors worldwide.

What amount of silver bullion can be acquired and pulled from the chart’s aqua-colored section of this London silver warehouse pile is unknown. But I would strongly bet that it is much tinier than this chart illustrates.

But for devil's advocacy, let's say the reported silver bullion inventory float in London is around 10,000 metric tonnes. That is only just over 321 million ounces of silver bullion. The nation of India alone, when their silver demand remains persistently high like it has been this month, and last, that amount could be taken by them alone in just over a year.

On the North American COMEX side of this 1,000-ounce silver bullion bar off-take equation this week, we saw a massive amount, nearly 5 million ounces of silver, leave the deliverable registered pile into the not up for potential physical delivery eligible pile.

You can see the dark green line cascading downward, and sharply of late, about -100 million ounces have been sucked from the COMEX silver registered pile since the Reddit WallStreetSilver Silver Squeeze phenomenon began.

We're now nearing falling COMEX registered silver warehouse inventory levels, back where they were when the spot silver price tripled from early 2010 to early 2011.

Silver bullion stackers are not only buying bullion hand over fist, but they are also reveling in anonymously showing off to one another in forums where they rally around like-minded bullion stackers.

We are moving on to the fact that the USA is now in an economic recession by official data and cogent definition. All while continually living in a state of seemingly endless financial propaganda, where the literal head of the Treasury goes on Sunday morning news shows to confuse and gaslight typically elderly viewers with highfalutin semantics and economic quackery.

The silver and gold spot prices finally saw a rebound in price this week of trading.

The spot silver price closed firmly above the $20 oz level. While the spot gold price moved up about $35 per troy ounce over the week's trading, closing around the $1,765 oz bid price.

The gold-silver ratio slid sharply below 87, bringing me to my first point of discussion.

A question for you regarding how you think the remainder of this year will go for the two primary monetary precious metals.

The spot gold silver ratio spiked early this week to 93, and my question for Twitter followers was will that be the top for this year 2022?

Or will we see a gold-silver ratio rise again to +100 and beyond?

One point to remember here is how ridiculously high the gold-silver ratio currently is at 86. A level higher than we peaked during the worst stretch of the late 2008 global financial crisis.

Of course, when we finally get to finishing the second half of the Global Financial Crisis. All bets are off on how badly phony precious metal derivatives will perform. If the 2020 pandemic retail bullion shortage wasn't a lesson, back when the spot gold silver ratio ballooned mid the 120s, in the physical bullion world, that number never got into the triple digits.

Silver bullion goes missing, or premiums are priced to massively divergent levels, making even buying it increasingly cost prohibitive. In another global financial crisis, gold bullion will go missing, and the premium will blow out too.

Speaking of escalating premiums, they have been happening on the gold bullion side of our industry as I warned you they would, here about a month ago. The US Mint's gold eagle and gold buffalo coin production numbers are not keeping up with escalating ongoing gold bullion coin demand. Thus price premiums over spot on those most popular gold bullion coins and, therefore, nearly all other subsequent bullion products are rising in accordance.

You can come back later this decade and see if my contention here is proven correct. But any gold bullion below $2,000 oz in hand is long-term value worth saving.

As always, to you out there.