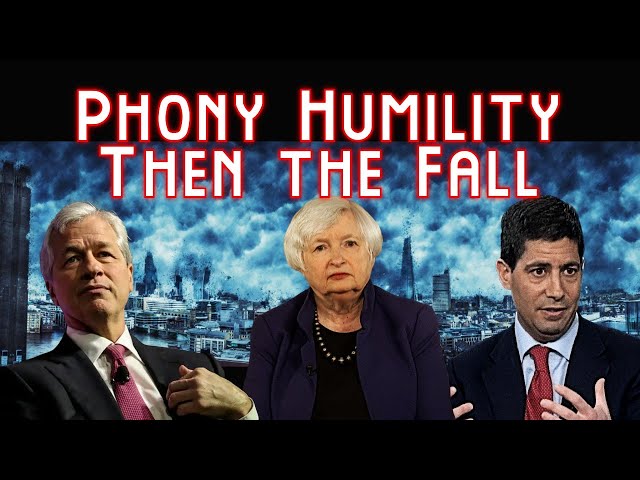 This past Wednesday, the USA’s biggest bank’s CEO made headlines and shook financial markets when he described the coming recession as a hurricane—questioning with an analogy of what category storm it might be. The strong comment should be noted given the robust real-time data he and his massive bank are privy to.

As chairman and CEO of the USA's largest bank, JPMorgan Chase, Dimon, and his massive commercial bank have admitted to an unprecedented five criminal felony counts since 2014, having also been put on criminal probation three times over.

Those five felonies are more than the bank pleaded guilty to in its prior 100 years. In other words, a large swath of unsecured US citizens' savings has been used to move markets while paying paltry fines in arrears appears to be the repeat criminal bank's running business model.

If there was legitimate justice inside this seemingly endless financial bubble after a fragile bubble economy, Dimon would have lost his job long ago and possibly be sitting in Federal prison.

Instead, Jaime Dimon and his cohorts often have better real-time economically sensitive information and data. Able often to see ahead of even the NY Federal Reserve's trading desk, with more detailed real-time data than the governors at the fiat Federal Reserve see.

Janet Yellen Admitting She was Wrong on Inflation

To retain a shred of credibility, the current US Treasury and former fiat Federal Reserve head, Janet Yellen, admitted that she was either incompetent or, more likely, simply gaslit the American people about the massive inflation they are suffering under now.

The still dominant fiat currency of the world blew out one of its most crucial supply measurements (M2) by over 45% in a relatively short duration of time. Escalating prices are the inevitable result of such irresponsible actions, no matter what pandemic lockdowns or wars have. Prices head higher regardless of when you create this much currency.

And judging by available data on the world's fiat currency supply measurements, that is precisely what they did.

Blackrock’s Go Direct document presented to major fiat central banks at Jackson Hole in August 2019 stated point-blank that the boost to the supply or stockpile of fiat currency has to be permanent; if try and take it away, a deflationary collapse will follow.

Describing their then-upcoming actions as 'helicopter money' delivered in sufficient size to drive up inflation. Knowing the growth of the currency supplies ultimately drives price inflation.

Kevin Warsh tries to Come Clean for the fiat Fed.

Former Fed governor, and likely one with ambitions of returning to perhaps chair the United States' fiat central bank, Kevin Warsh went on CNBC this week, admitting where much of the current price inflationary escalation policy began.

The problem is he misspoke about the date. Of course, these supposed financial journalists don't rebuke him for that. Instead, they listen to something they probably did not even know occurred.

Again, a half year before rolling pandemic lockdowns, a month before the overnight NY Fed REPO loan fiasco, the date to burn into your mind was August 2019

You shouldn't be confused, they planned it

3 ways out of our World-Record Debt quagmire

The silver and gold markets traded slightly down overall for the week.

The gold-silver ratio ticked back up to 84.

The US Mint continues its torrid pace of gold bullion coin sales, selling almost 199,000 oz for May 2022.

Just over six metric tonnes of gold going to private investors may not sound like much, but on a historical basis, the US Mint is still on pace to break last year's record-high sales of gold bullion coins. The mint is likely to sell over $3 billion in gold coinage at this pace.

As the summer begins for most of you viewers out there, perhaps market volatility will slow for a short respite.

Take advantage of the seeming calm conditions while they last.

Once the next recessionary financial storm slams into us, you'll want to be prudently positioned to ride out the storm and take advantage of the coming pivot from supposed tightening to easing financial conditions.