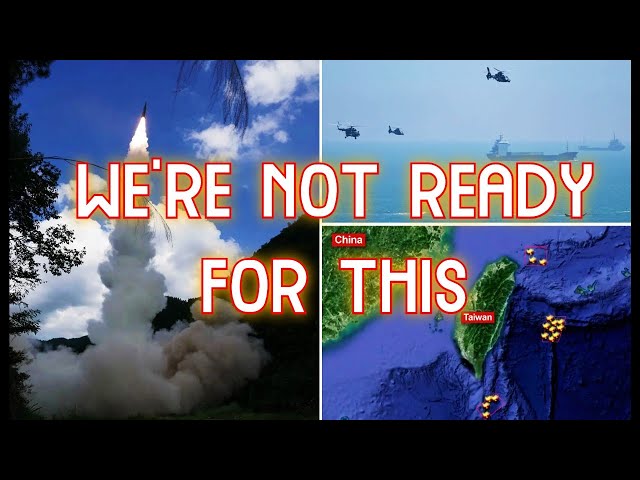 Is the US Economy Ready for Economic Warfare?

Last week's brief visit to Taiwan by the current US Speaker of the House, Nancy Pelosi, set off China to begin executing live military drills, including missile launches from the southeast Chinese mainland over the island of Taiwan.

And the Chinese military is practicing for a potential military blockade of the island itself, a significant ratcheting of concerns that China will eventually invade and take over the Taiwanese island as it did prematurely (by over 25 years) in Hong Kong not long ago.

Since the start of this year, Chinese real estate, the notionally largest single asset class in the world, has had significant issues with insolvency. Think of all the undisciplined credit expansion and mass Chinese ghost towns built in the 2010s heading for comeuppance.

There is even a growing online movement within China to boycott paying loans back on unfinished property projects.

Now that Chinese real estate and in-kind some of its internal economy are beginning to fail, the CCP might want a war-like distraction.

This dangerous and developing situation will likely have way more economic, and geopolitical ramifications than even the recent Russian invasion of Ukraine has had.

For you to get a deeper perspective on how important this development is and how genuinely under-prepared the western world is for such a conflict. When you are done with this week's SD Bullion Market Update, I strongly suggest you listen to this recent over-hour-long Hidden Forces podcast involving three US government policy-connected experts explaining some of the stakes.

The monetary precious metals had a mixed week in price trading action. The gold silver ratio climbed to 89 as the daily silver spot price closed slightly lower this week, with a spot bid price finishing just below $20 oz.

The daily gold spot price closed slightly higher this week after threatening $1,800 oz overnight on this China Taiwan news, only to be knocked back this morning by an artificially inflated jobs number report.

In the United States, we have never had more workers holding two full-time jobs simultaneously, and you can see on the chart covering 21st Century data that recent escalations in ongoing price inflation in the 2020s have contributed to the record numbers of two simultaneous full-time job-holding workers today.

Labor force participation rates in the USA are not going up but rather down. As 10,000 Baby Boomers retire on average per day, we have not had labor force participation rates this low since many said Baby Boomers originally entered the US workforce back nearly fifty years ago, when often ongoing 1970s price inflation was also in the mid-teens in real terms as it is today in 2022.

Consumer credit card balances are jumping up at levels not seen in 20 yrs.

While not surprisingly, US savings rates have been falling, indicating that household budgets are running thin.

Financial propaganda would like you not to know that the current US economy is on a razor's edge, likely in recession already.

How long and deep might the coming changes in our reality become? Significantly if the economic and military conflict in the east ratchets higher, economic fallouts would be enormous, inevitable, and likely profound.

Since the 2008 global financial crisis was put on pause, the world's central banks have been creating trillions of fiat currency units buying up illiquid assets to prop our current economic system up.

Private physical gold bullion buyers in the western world have, for the most part, known this dirty ongoing open secret and have been steadily stacking gold bullion by the tonnage of 50 to 100 metric tonnage quarter after quarter since.

Most long-term gold bullion owners have been rewarded for the last 20 years, preserving real purchasing power while their respective fiat currencies devalue in real terms by design.

As illustrated by ongoing data, both the western and now finally again, the eastern world is also increasingly buying silver bullion.

Suppose the nation of India continues at its first half 2022 silver bullion import pace. In that case, it will alone import more than +220 million ounces of silver bullion this year (half of which will likely be imported from the United Kingdom, likely mostly via London), putting further physical pressure on long-standing silver derivative price suppression systems.

The Perth Mint is picking up the slack that the US Mint is not meeting in ongoing physical silver bullion coin demand.

Almost all signs for silver and gold value long term are fundamentally bullish.

For those not yet prudently positioned, move while fiat US dollar-denominated spot prices remain reasonable and bullion is within reasonable price premium reach.

And as always, to you all out there.