Be it before this 2020 US election or in the perhaps the turbulent months that follow.

One way or another, more ∞QE and stimulus are coming to further ramp silver prices and gold prices.

To begin this week, take a look at that second headline illustrated here, which states, "The Dow is now positive for 2020".

If you foolishly denominate the Dow in nominal fiat Fed notes, it is.

But if measured by supreme money, thus far in this year 2020, and likely worsening this decade unfolding, gold bullion has and further stands to outperform the Dow.

You can see since the start of this year 2020; this critical ratio has fallen from just below 20 to now just below 15. 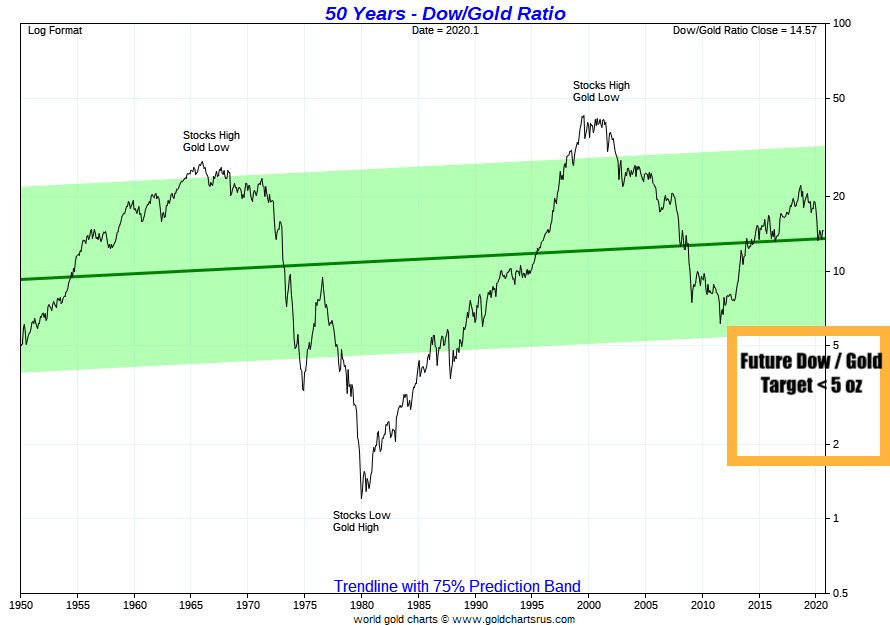 We expect to see this QE fueled debt cat equity rollover, below its old 2011 low, below 5 oz of gold bullion to buy the Dow.

In the coming next commodity bull market, it is even possible we go back towards the old sub 2 oz level, also breached for a few years in time back in the early 1980s.

Do me a favor before we run through this past week's important related bullion news. Smash that like button on our youtube video so we can hack this platform's algorithm. Kind of like Larry Kudlow did, stimulating and pumping the stock market's algorithmic trading bots this morning on Fox News.

A few quick data are running reminders that the US consumer, which accounts for about 70% of the economy, is still nowhere spending what they did pre viral crisis.

Here is a total job posting data, and it shows a consolidation ranging from negative 10 to 20% fewer opportunities than typically had pre viral crisis.

Bond trading billionaire and raging silver bull, Scott Minerd tweeted the part of Capitan prominent by stating, "Without fiscal stimulus, personal income will fall, layoffs will mount, consumers will pull back on spending, and more small businesses will fail.”

Now you are looking at a chart, which shows that small business revenue on average is off more than 20% or worse since the pre-viral crisis era. The trend has been consistently sideways terrible for well over three months, illustrating that this is the new semi-viral lockdown norm for American small business revenues.

Remember, too, that small businesses create the vast majority of jobs in the USA. So yea, more stimulus and ∞QE cometh, only is how and when exactly.

We are turning briefly to a topic we have covered before on this SD Bullion YouTube channel. Not coincidentally, on March 23, 2020, a bill S.3571 was introduced in the Senate of the United States of America.

If passed into law as it is written right now, it would require all Federal Reserve member banks no later than January 1. 2021. Make digital wallets available to all residents and citizens of the USA. These would be branded and called "FedAccounts" maintained by the private Federal Reserve Bank on behalf of the USA.

Again the bill is called S.3571; I will leave a link in the show notes if you would like to read the details.

A system such as "FedAccounts" would likely be a Universal Basic Income with "Free Monthly Money" to ensure massive adoption.

More than likely, it would merely be more fiat currency issuance, but this time, in essence, directly from the Fed's BRRR machine to consumer's FedAccount wallets.

Maybe this is not precisely how CBDC FedCoin is going to come about, but the bill will give you an idea of how and what they are planning.

The US Mint, a subordinate bureau of the Department of the US Treasury responsible for producing circulating fiat and cupro-nickel currency for the United States of America, is also responsible for making gold and silver bullion coinage. Of course, only in quantities US Treasury head Steven Mnuchin deems reasonable.

The most popular and often purchased of the American Gold and Silver Eagle bullion coins show here.

The US Mint made headlines this week by announcing a dramatic price increase for numismatic, proof, and collector precious metal products. It retails directly to the buying public off its website. Here are the updated prices, effective immediately on their website pricing.

$67 fiat Fed notes for an American Eagle One Ounce Uncirculated Coin indeed sounds like a rip off right now. But I've been expecting a day in the future to come where that currently inflated price will sound like a deal too good to be true.

The main takeaway with this news is we in the bullion industry should also expect US Mint seignorage fees to increase in the coming year 2021. Prices for these bullion coins are likely to remain widely diverged from the spot prices underlying their precious metal values.

Once the silver spot price eventually clears its old fiat $50 nominal price high, a run to say $67 oz will likely follow quickly. And I am confident by then; even generic American Silver Eagle coins will be commanding bid price premiums of say $10 or more over the then silver spot price.

This illustration published on Visual Capitalist's website this week illustrates how much fiat Federal Reserve note currency creation the US has engaged in thus far in the year versus how much gold and silver bullion the US Mint has issued in comparison.

By September 2020, the new US currency supply creation value was 2,100 times larger than the amount of the original gold bullion coins minted by the US Mint.

We'll point it out again. These record gold bullion imports into the USA thus far in 2020, are likely a result of high net worth investors and family offices going long physical gold.

Tweet of the week goes to Daniel Lacalle, who states, "More than 700 metric tonnes of gold (or just over 22.5 million troy ounces) have been added to vaults around New York this year, the most in records going back to 1993.

Why now? Why so much? Look at the balance sheet of the central banks soaring to $21 trillion and the global monetary insanity for the answer."

When do you think New York will be getting its fiat Federal Note bailout? Hmmm

Interesting retail bullion buyer news. Costco made headlines this week to sell gold bullion bars on its retail floors in the United Kingdom.

Here is a quick snapshot I ripped off twitter for you to get an idea.

Someone on twitter reminded me that Costco has been selling gold bullion bars in Taiwan for some time.

And this trend will only grow not only in big box store retail gold but also in silver to come.

And here is a current unfolding illustration as to why to close this week's update.

This is a just over 20-year illustration of the fiat Federal Reserve note vs. the fiat Turkish lira currency.

As you can see, before the year 2001, one Turkish Lira could buy you more than one so-called US dollar. It officially takes almost 8 Turkish Lira to buy 1 US dollar, and likely for average Turks, the real exchange rate is much higher than even that.

The Turkish people have a multi-millennia heritage of stacking physical gold as a long term store of value. A tradition that likely stems from their abundant wealth via trade roots, following the collapse of the Roman Empire.

Turks often buy and own high purity grade gold jewelry to hedge against risks like their fiat currency devaluing sharply as in right now.

They are a consistent importer and refiner of physical gold.

But too, and about my point about poor man's gold playing catch up and eventually also showing up on retail trading floors. Here is a chart showing record physical silver import inflows into Turkey.

I am looking forward to when India does similar bidding physical silver in lots so big the world will have difficulty in delivering. For now, those Turks who bought silver have also protected and likely enhanced their local purchasing power too.

The current rampant devaluation of the fiat Turkish lira versus gold is coming to every nation worldwide because every fiat currency will eventually also bow to historic monetary metals, gold, and silver.

Hopefully, during this current spot price consolidation, and before the next stimulus and ∞QE round runs rampant, you will have prudently added or secured your position in the precious metals for the ride to come.

That is all for this week. Thanks for coming by. As always, take great care of yourselves and those you love.