To say the last week has been odd for the markets is perhaps the understatement of 2020, and that's saying a lot because, well, it's 2020.

Last Friday, in the early morning hours, President Trump informed the public that he and the First Lady tested positive for Covid-19, and on Friday evening, it was reported that President Trump went to Walter Reed (military hospital) where he could be isolated and yet continue to work, all the while being monitored by top doctors. On Monday, October 5, President Trump returned to the White House from the medical center saying that he felt better than he did 20 years ago.

Why does this matter for the markets?

It matters because what happens to President Trump, and what he does and says, moves the markets.

The latest example of this happened just yesterday, Tuesday, October 6, 2020. At 2:48 p.m. EST, President Trump Tweeted that he was rejecting the Democrats stimulus bill and calling off further negotiations until after the election.

Needless to say, chaos in the markets immediately ensued: 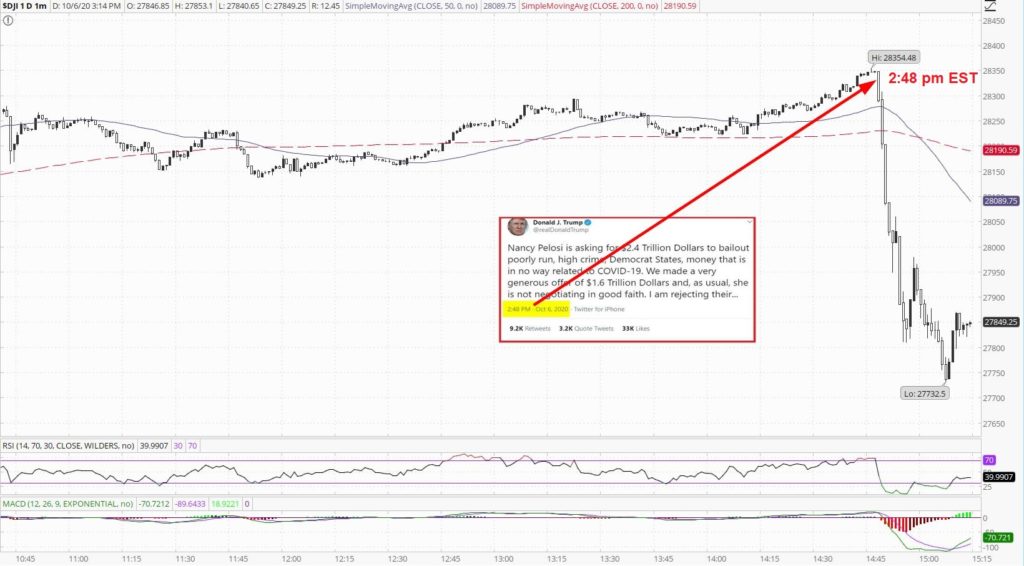 The stock market plummeted, as did gold & silver, and the US dollar popped while bonds were bid.

Fast forward to Tuesday night, however, and President Trump fired off another Tweet, this time discussing his willingness to immediately sign a $25 Billion bail-out for the airline industry and another $135 billion for small businesses.

This had the effect of causing many markets to reverse, including the Gold market: 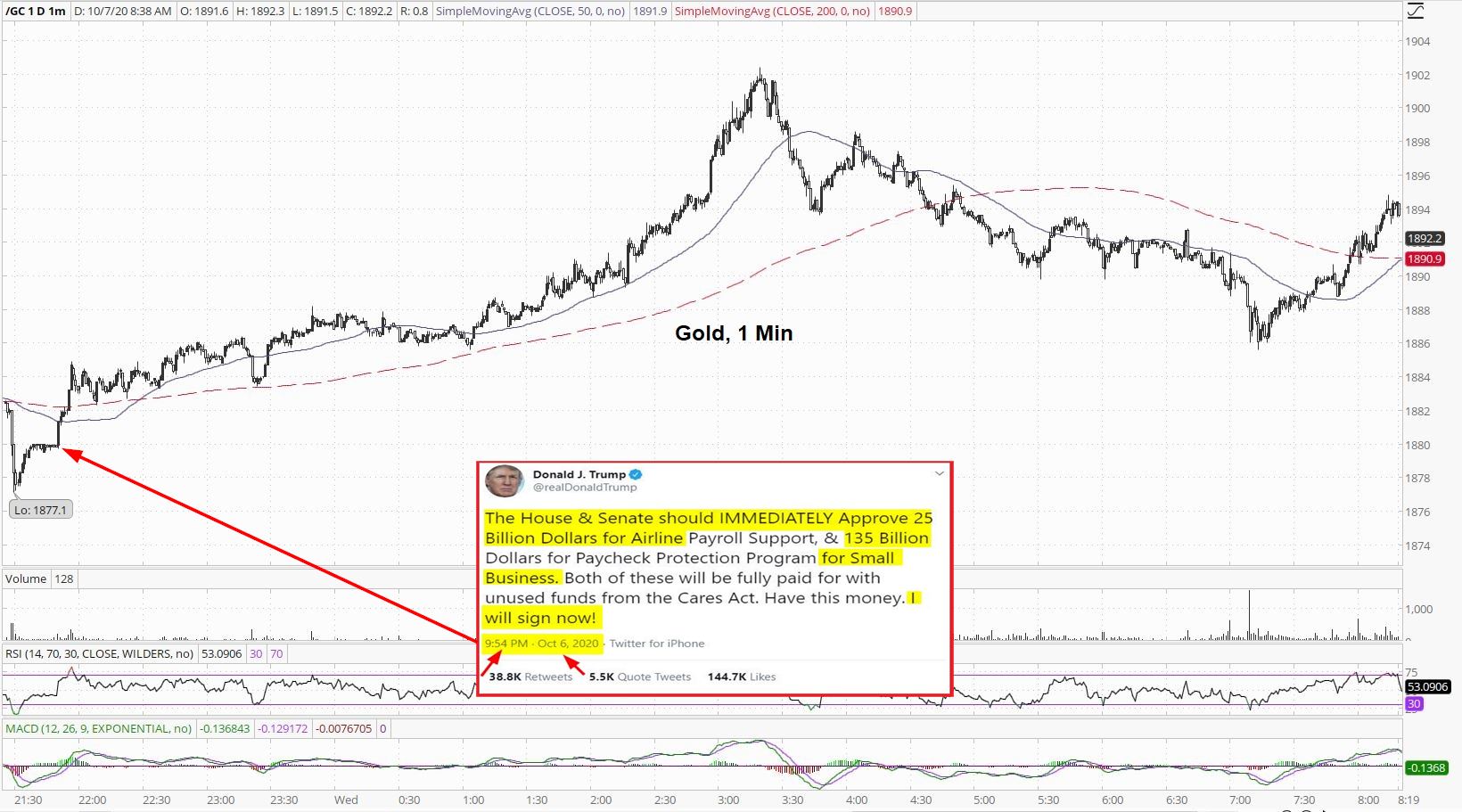 Suffice to say, if the markets feel like a rollercoaster, that's because they are!

Does this mean there will be no more of the $1200 stimulus checks per eligible adult US taxpayer and $500 per eligible dependent?

Regardless, there is a whole lot of trading week left, and there is a whole lot of trading days left before the election, which is now less than one month away, so if there's one piece of advice that may be appropriate here, then perhaps it could be, "please keep your arms and legs inside the rollercoaster until the ride comes to a complete stop"?

Silver could have stopped falling: 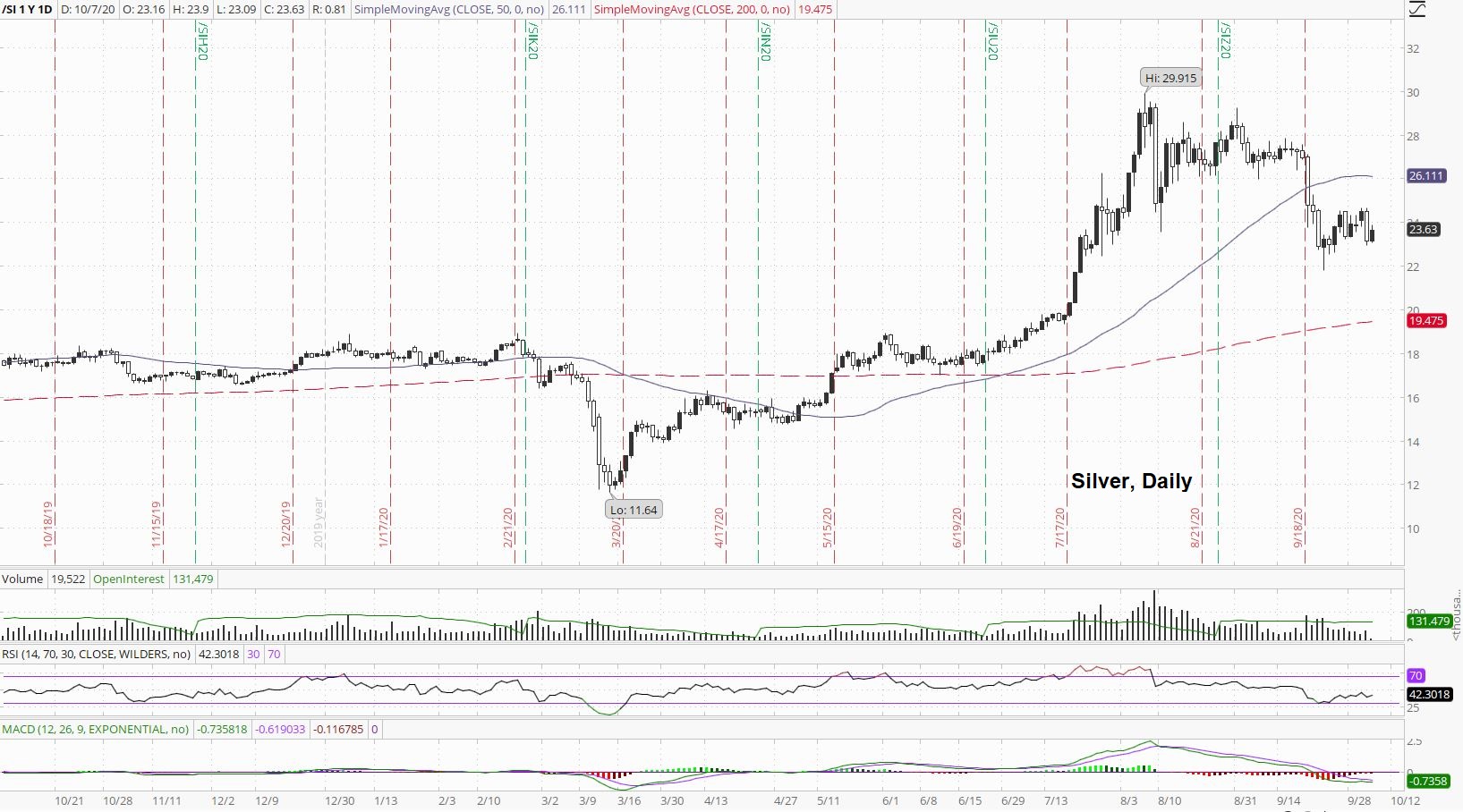 Some technical analysts have been mentioning a possible bear flag, but it could just as well end up being a double-bottom.

Even more bullish than a silver double-bottom would be if gold is putting in that all essential, first higher-low: 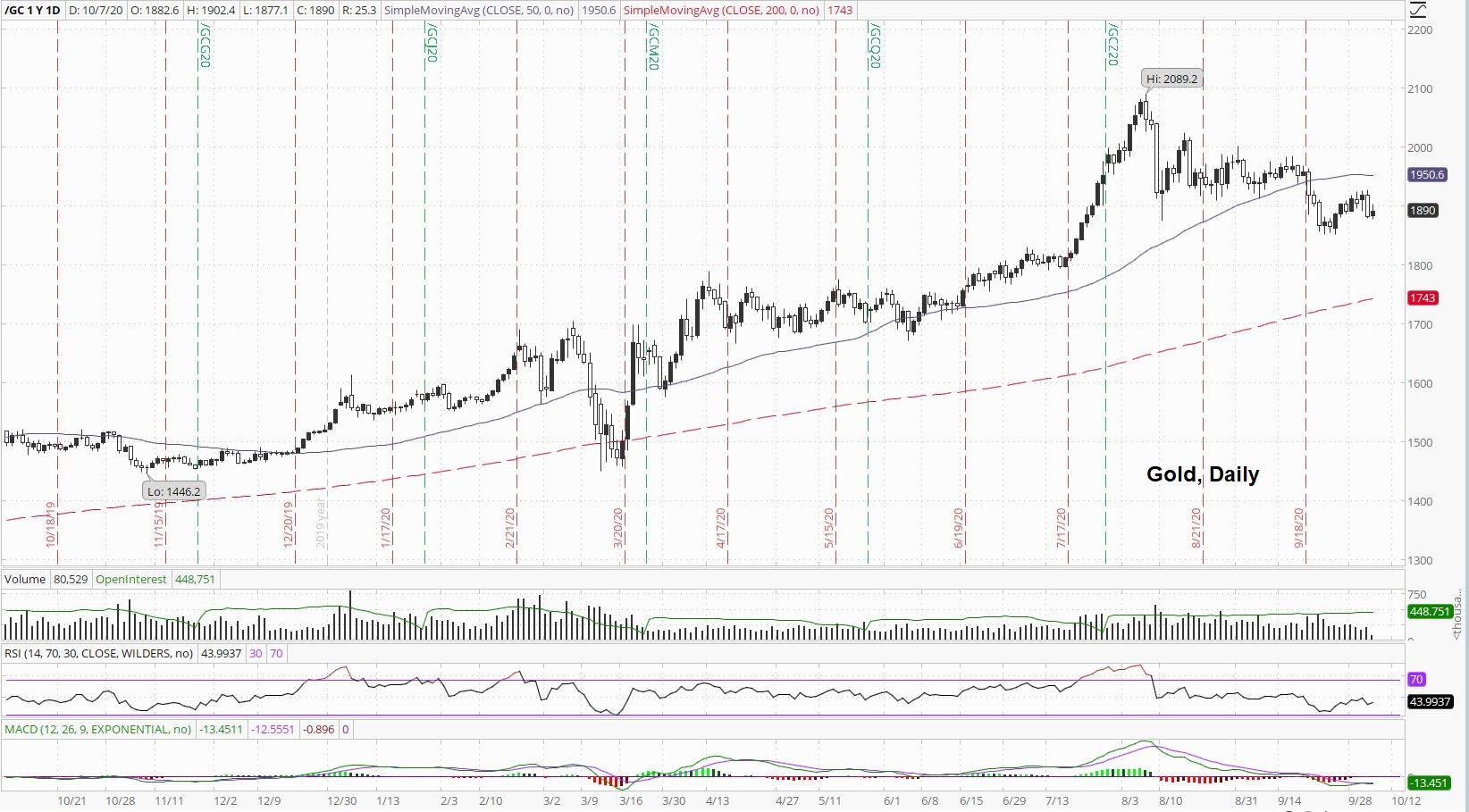 If the bearish technical analysts are right, however, then we should have some great support at $1800 if not $1850.

Either way, the paper gold-to-silver ratio is right where it ended last week: 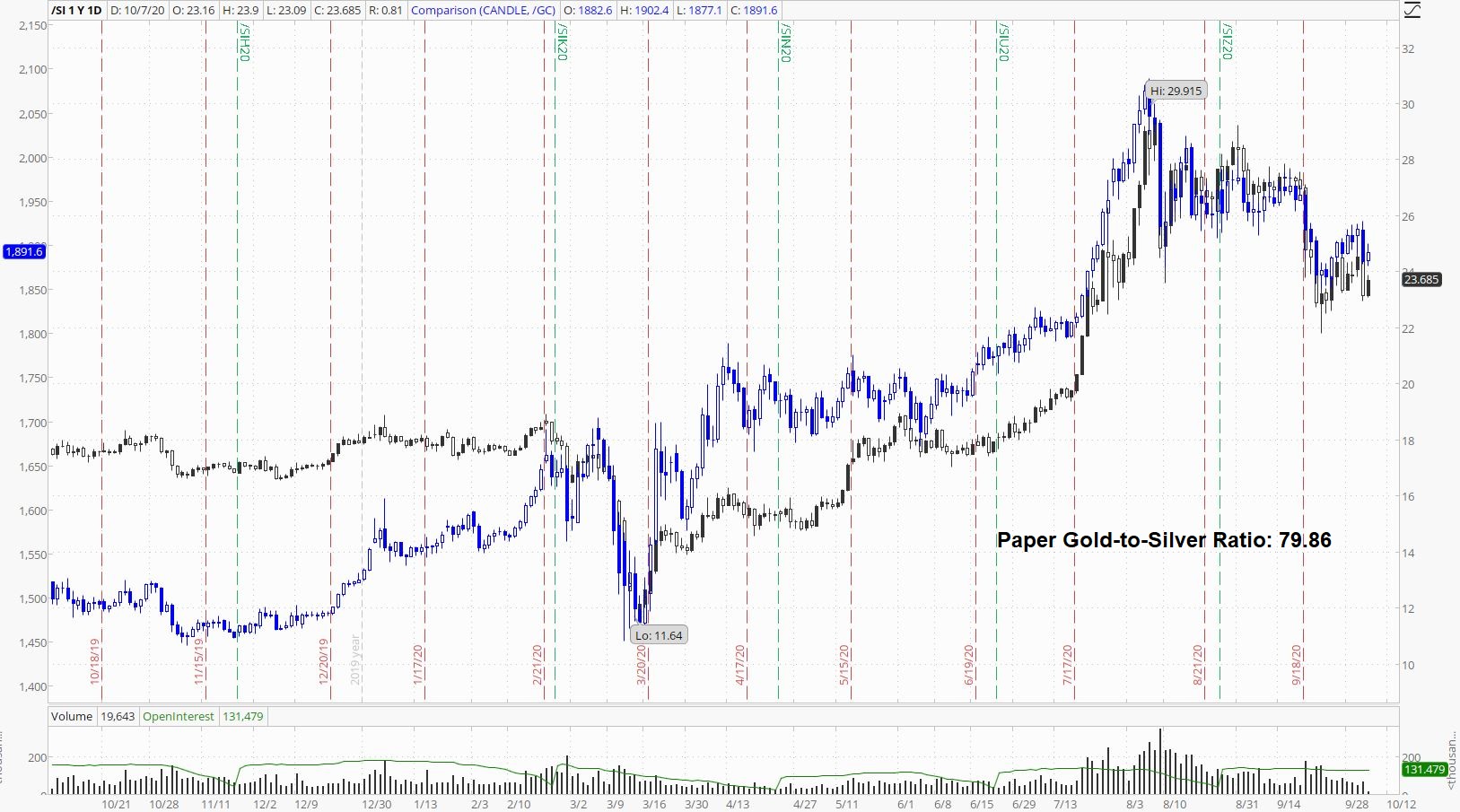 Platinum is also still right where we left it last week: 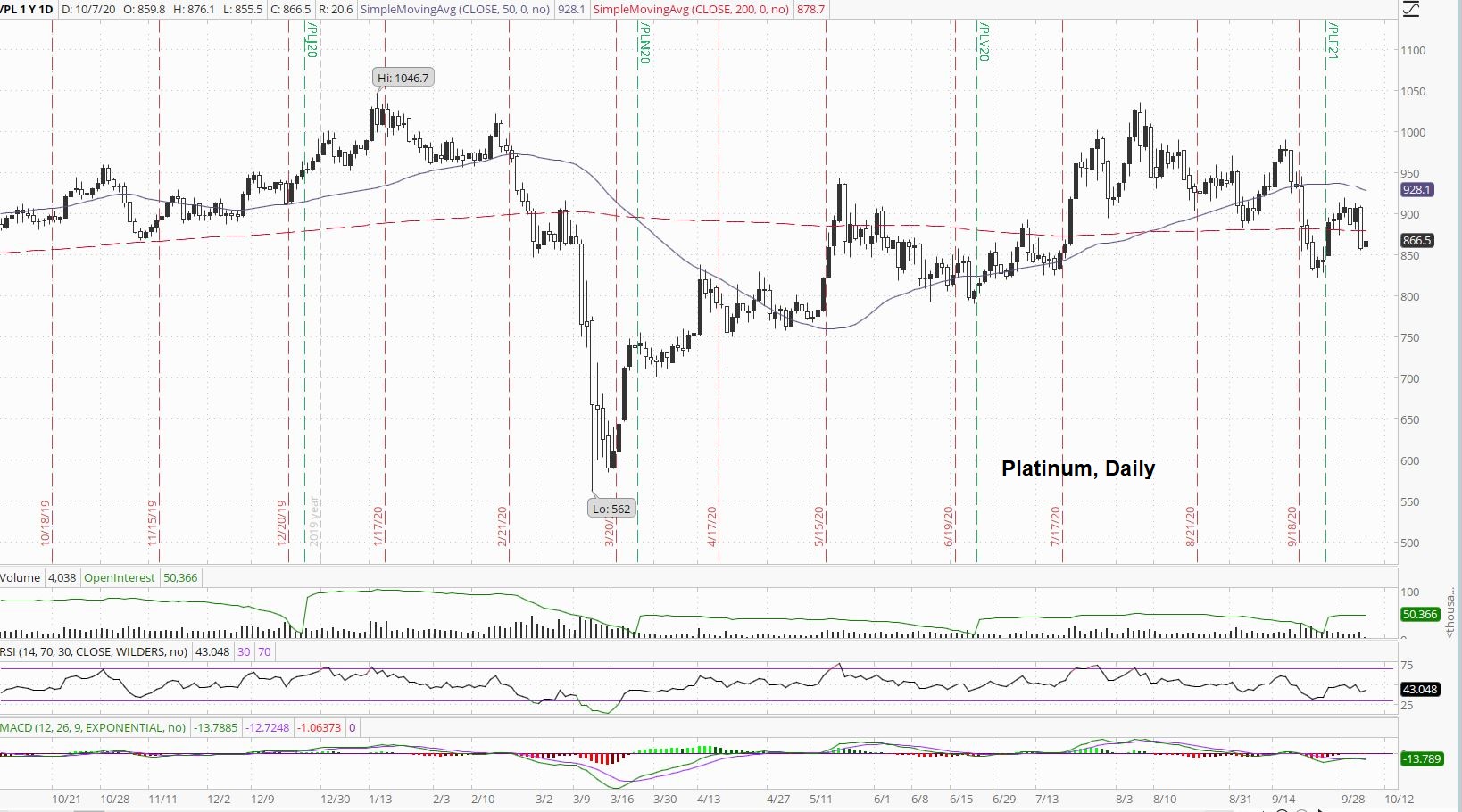 Platinum's a hundred bucks down, year-to-date, in a highly inflationary environment?

Palladium has yet to break-out above its sideways choppy channel: 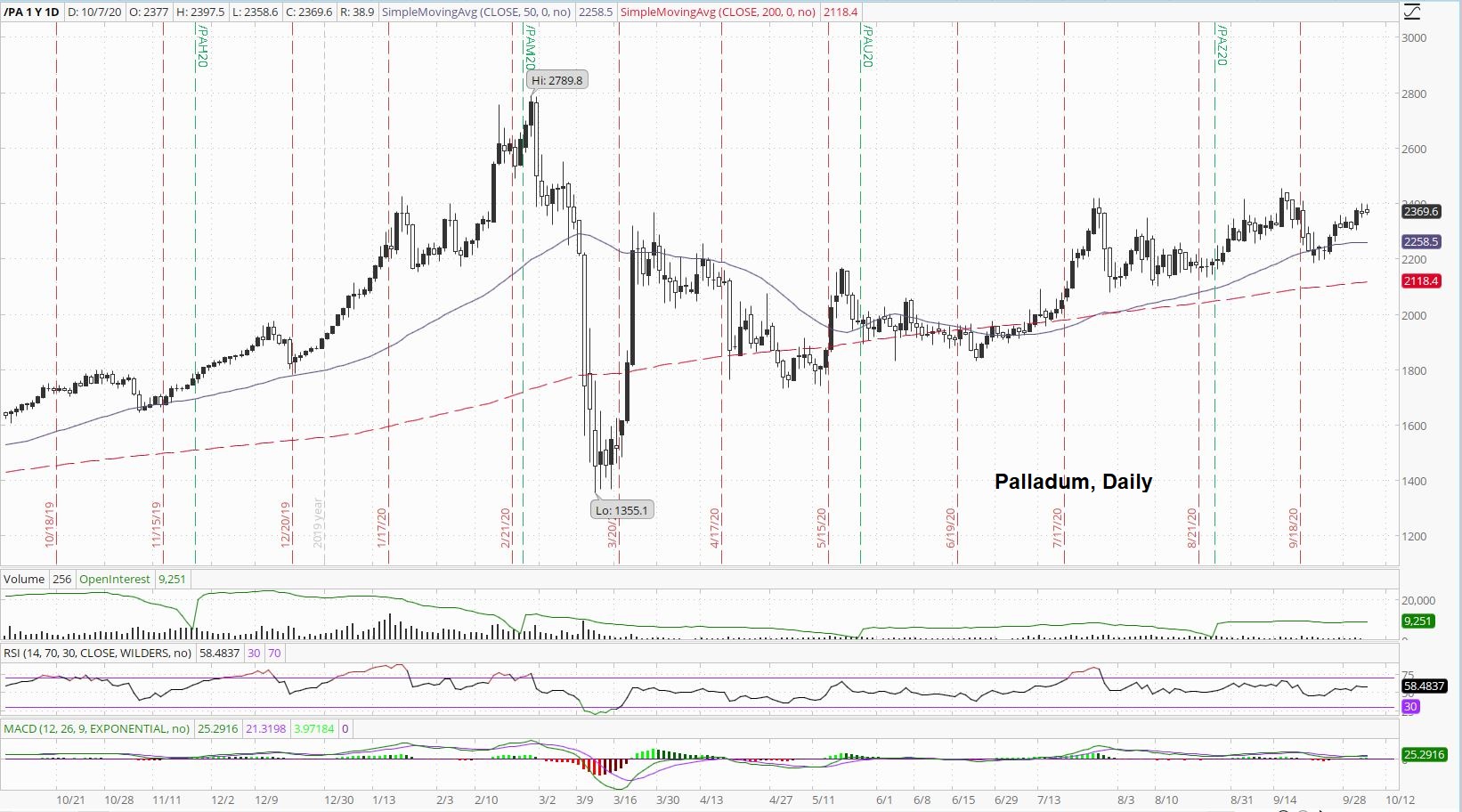 There have been two days of probing, and while palladium seems indifferent to President Trump's Tweets, so far, as we've seen in the examples above, it only takes one Tweet to really get things moving!

Copper is back above three bucks: 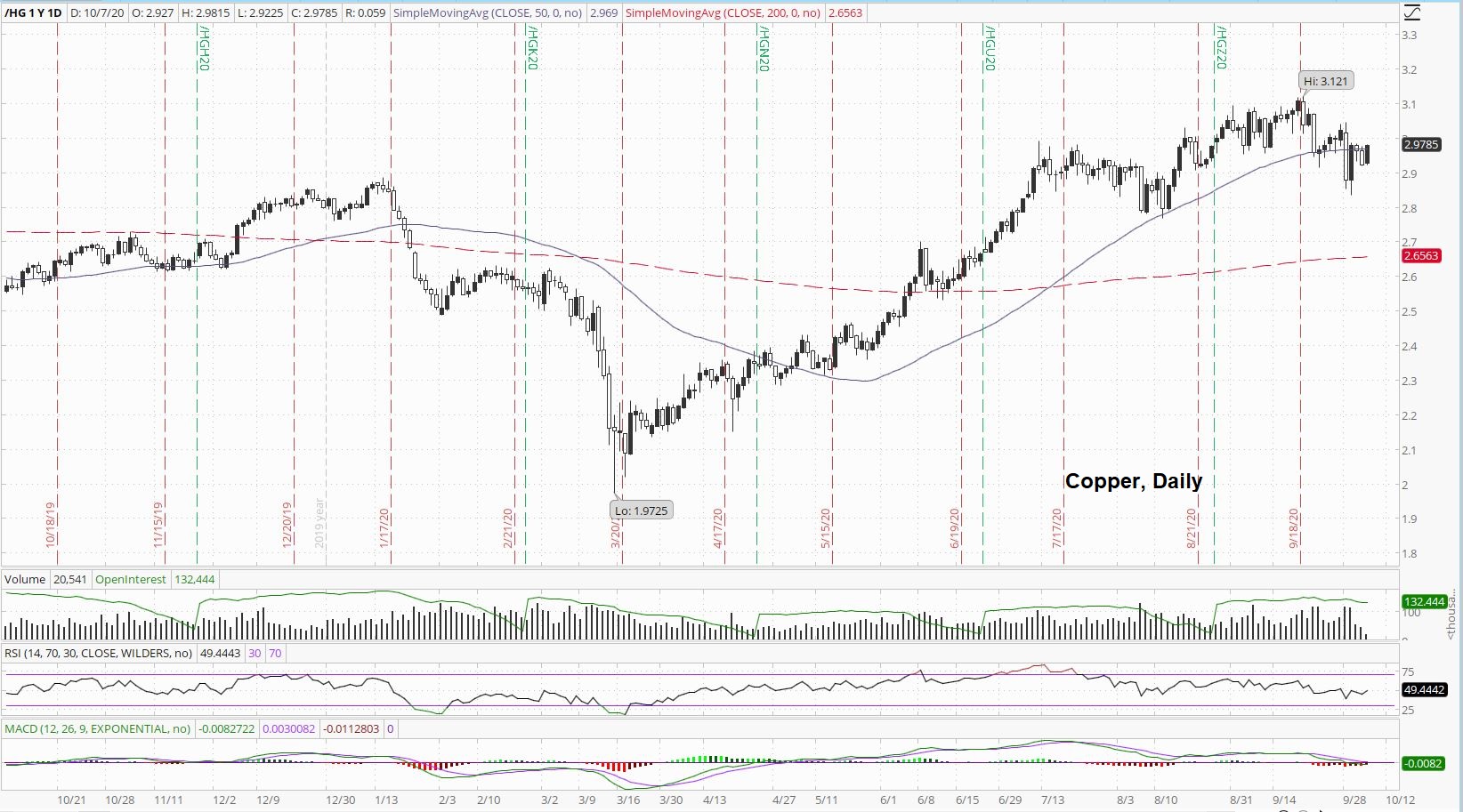 I'm sure the technical analysts are looking at copper to see if we're rolling over here, but from the fundamental point of view, unbacked, debt-based fiat currency is infinite whereas real metal is not.

What is also finite is above ground storage for crude oil: 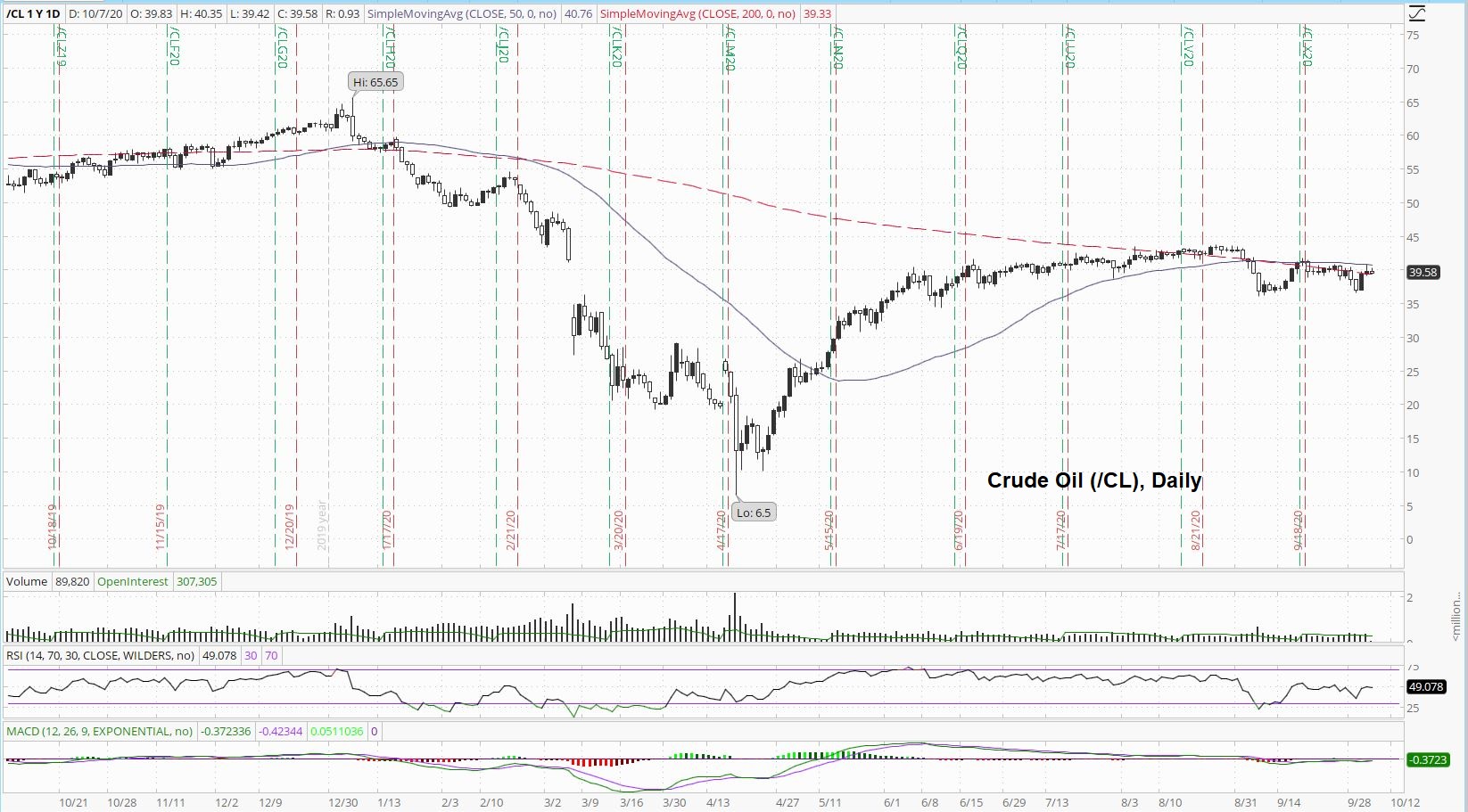 If the airline industry needs a second bail-out in six months, to the tune of $25 billion, what does that say about the demand for crude oil?

Sure, the VIX popped yesterday, somewhat, but I wouldn't exactly say there's a lot of fear in the markets: 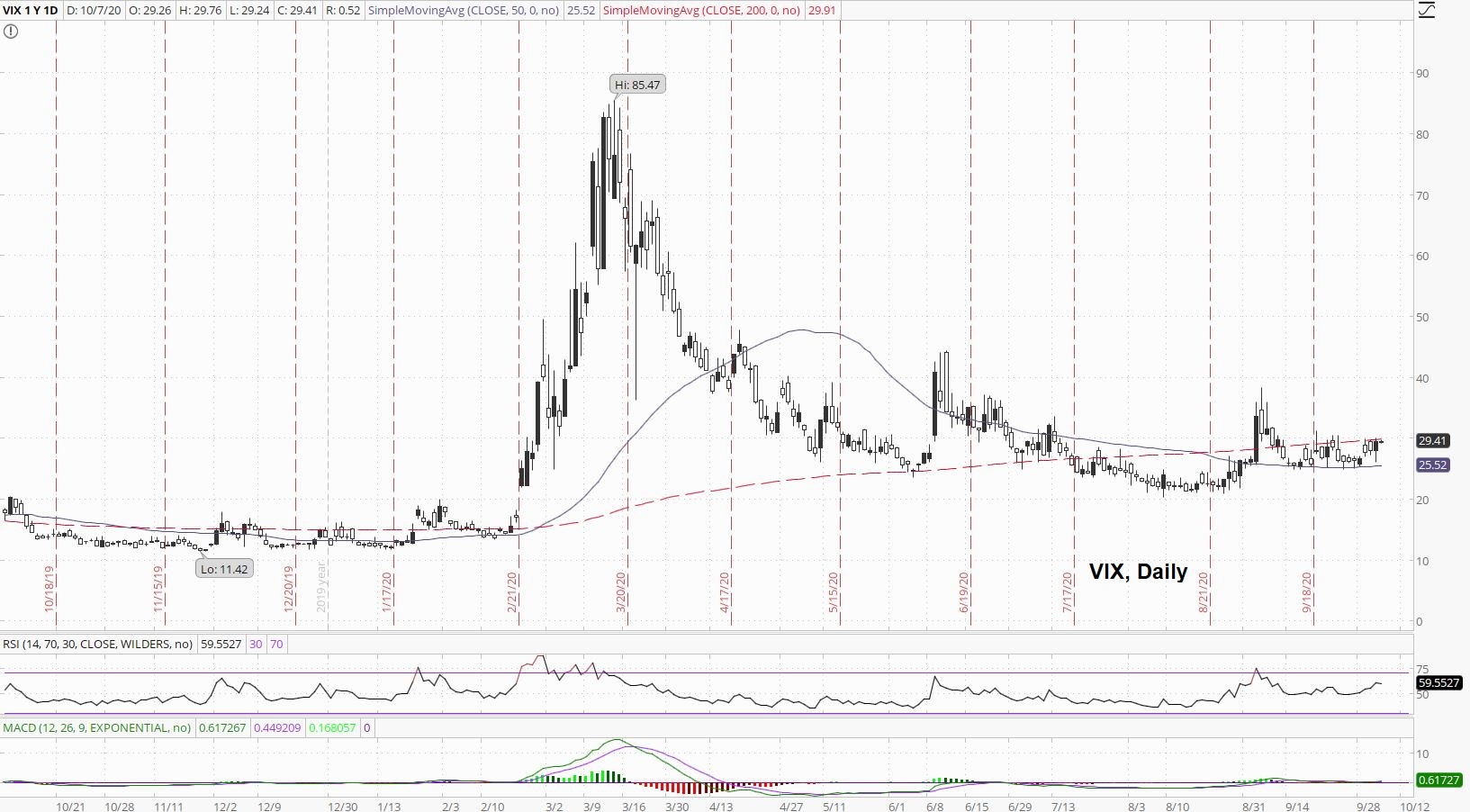 If President Trump being hospitalized for coronavirus doesn't cause any fear in the markets, what will?

Including the "negotiations are off" Tweet, the Dow didn't even lose its 50-day moving average: 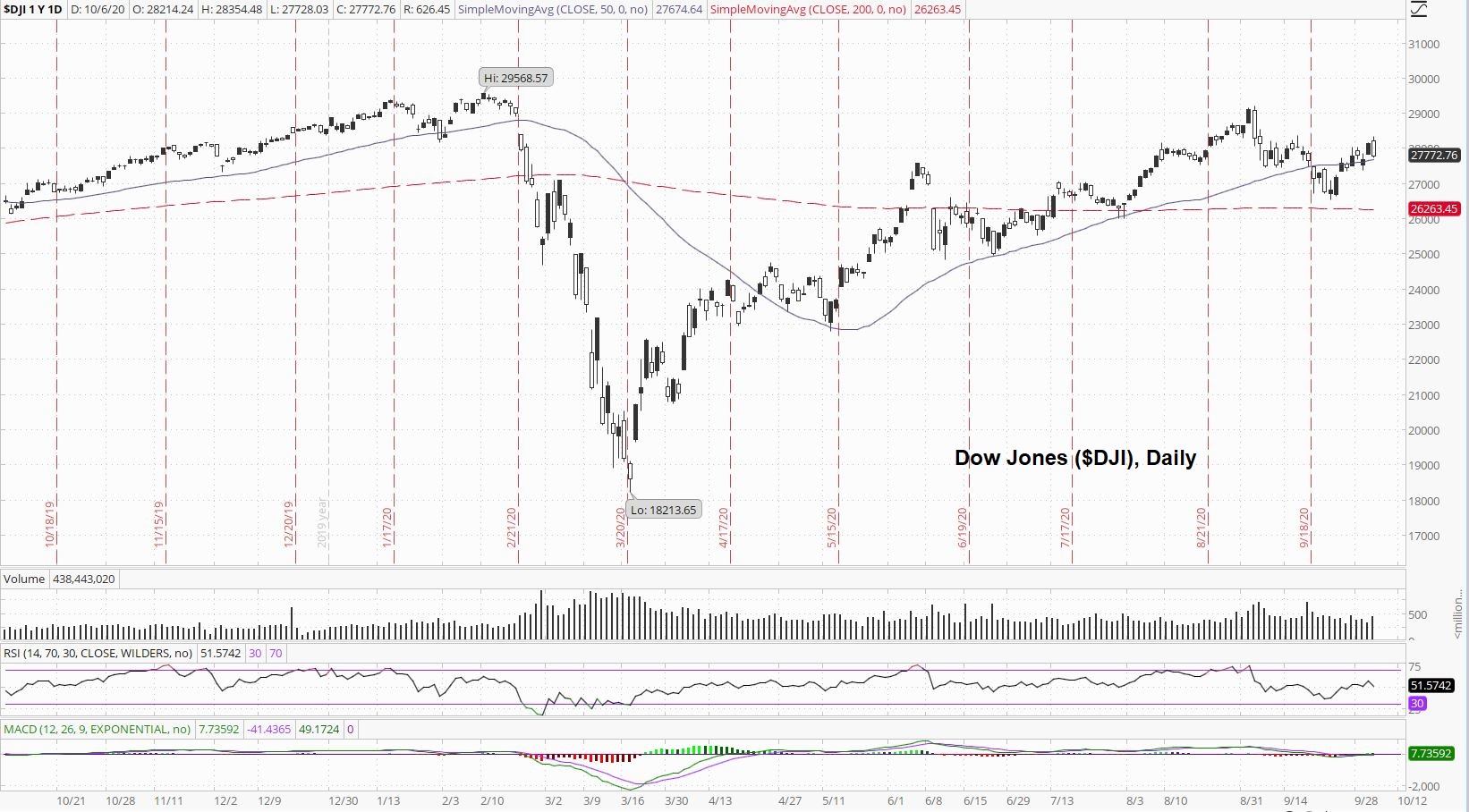 Furthermore, the higher the stock market goes, the less dramatic the multi-hundred point swings really are.

Although the move in yield on the US 10-Year Note is pretty dramatic: 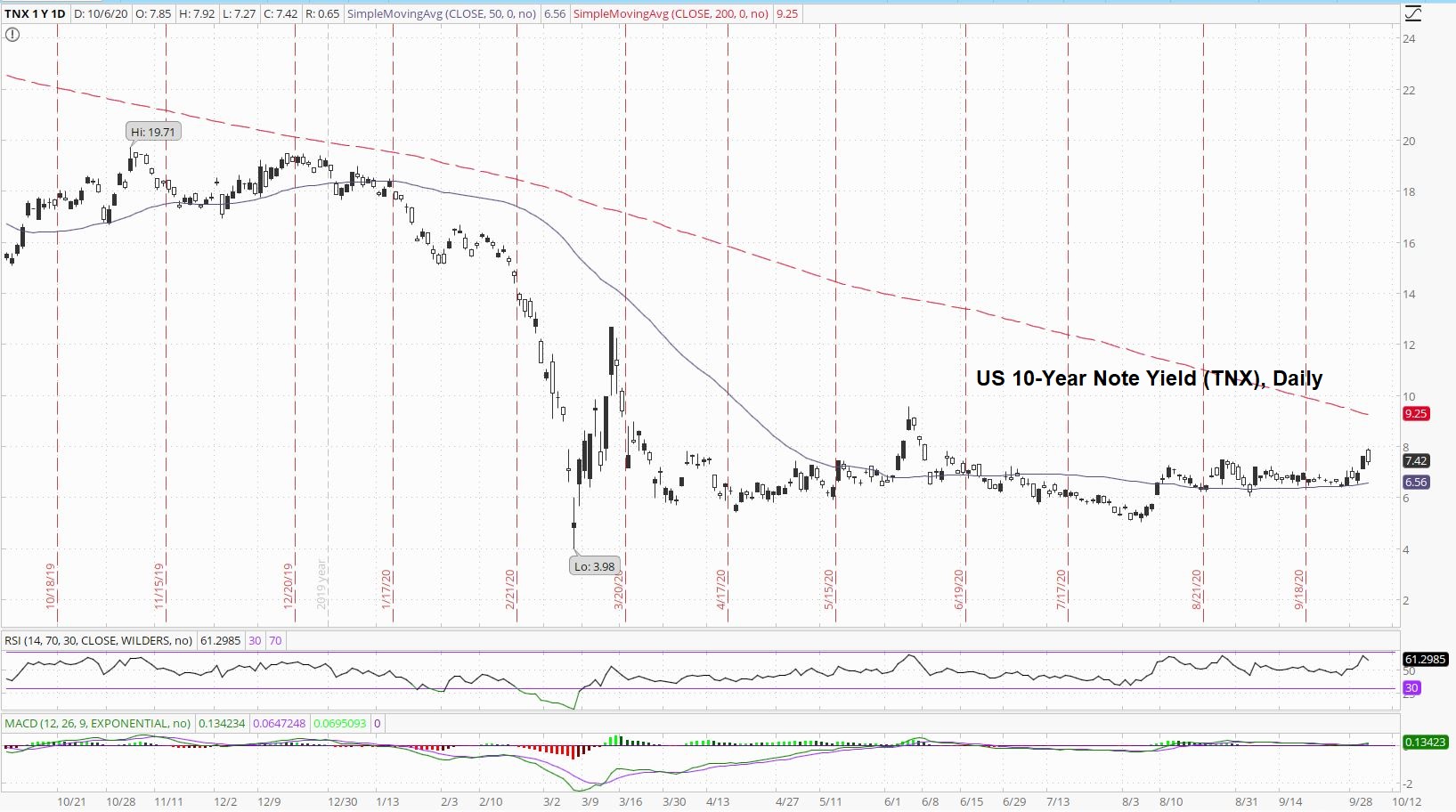 It may not look like much of a move over the last three days, but it's certainly not the 0.6% to 0.7% range we've been following since March.

Finally, for all of the turmoil over the last week, the US dollar index has shrugged: 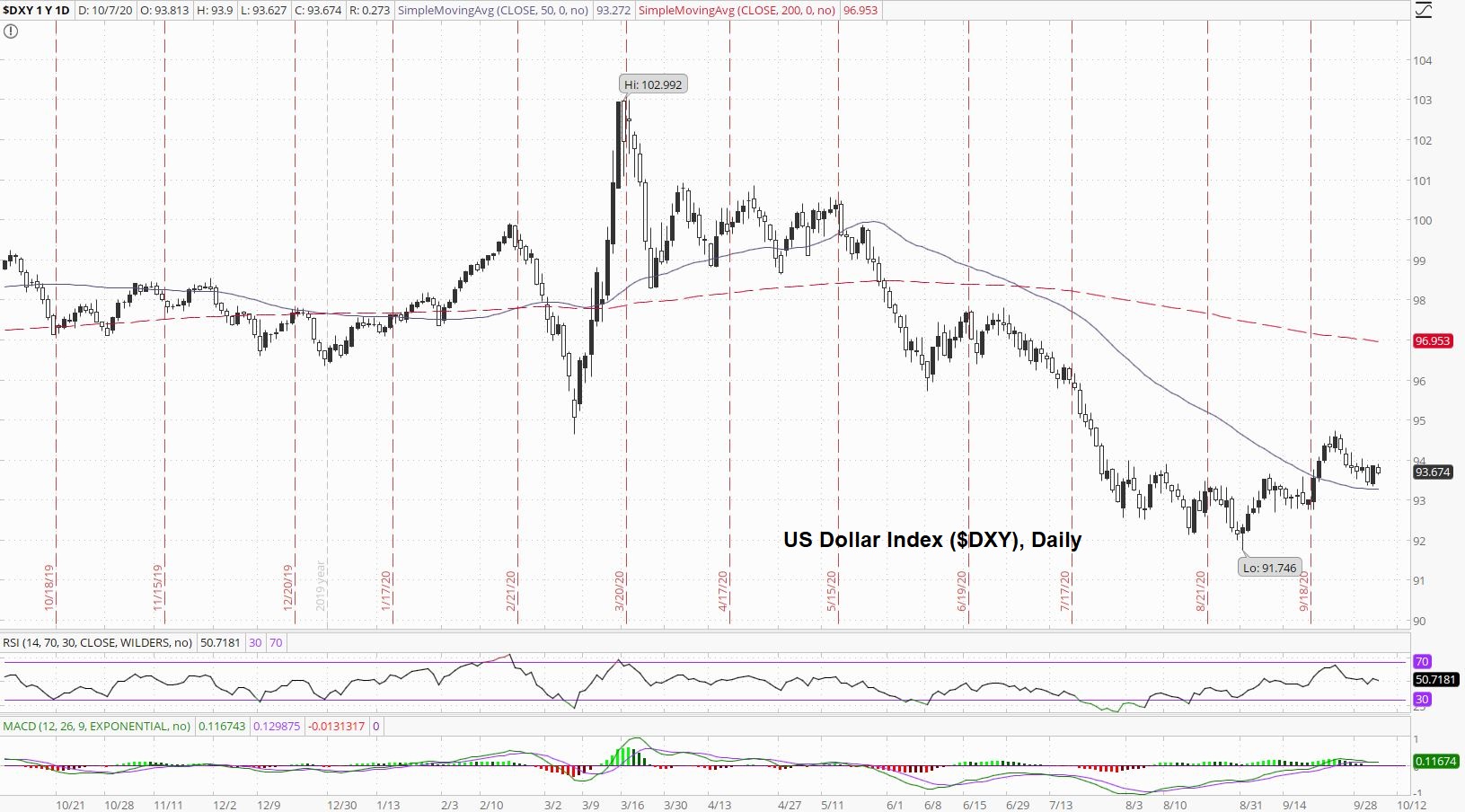 There is no doubt, however, the bulls are looking to the dollar and thinking we've got ourselves a second higher-low on the chart.

Of course, any relative gain in purchasing power, especially when it comes to the ability to purchase real money, Gold & Silver, affords new, humble stackers and other smart investors just a little bit more time to prepare.