For several months, there has been a strong argument to be made for the fundamentals having taken over the technicals in the gold and silver markets. This is why so many analysts have been dumbfounded with gold breaking through whole numbers with ease, at $1700, at $1800, at $1900, and now, at $2000. Pullbacks have been shallow, and people who blinked have missed them.

Remember those $1200 checks from back in the Spring, which was part of the first CARES Act coronavirus Federal fiscal stimulus package? The actual name for the payment was "Economic Impact Payment" (sample image on CNN), and many households qualified for some amount of "free money" from the US government, up to, if I recall correctly, $3400 for a family of four.

Well, Republicans & Democrats in Congress, as well as President Trump, are close to agreeing on CARES Act 4, which is widely assumed to include another round of Economic Impact Payments.

Here's the thing about that: When it comes to gold & silver, it literally is a "buy the news" event.

That is to say, in the world of investing, there are many sayings, such as "sell the news" or "buy the news", and often times that is meant figuratively, corresponding to a certain event having an impact one way or another on the markets. In the case of the Economic Impact Payments, however, the news in and of itself is a direct impact. That is to say, if there are individuals and families who are willing and able to save those payments, then surely many of the people who are smart enough to save are also smart enough to save, not in rapidly devaluing dollars, bur rather, in real money - Gold & Silver. Therefore, once CARES 4 is passed and signed by President Trump, I'm sure another wave of buying will come into gold & silver, especially in light of the second fundamental reason this current correction in Gold & Silver may be shallower in price and shorter in duration than many analysts think.

Just last Friday, huge news hit the gold community in that Warren Buffett's Berkshire Hathaway took a huge stake in Barrick Gold in the second quarter of this year. The news came in the form of a 13F Filing with the SEC (link), and to sum up the news, the legendary investor, via Berkshire Hathaway, has decided to significantly reduce his exposure to the financial sector, as in the banking sector specifically, and take out a massive stake in Barrick Gold, a gold mining company. MSNBC has an interesting tracker that shows, among other things, the number of shares and values of various holdings. Of note is that the purchase, as of the end of June, was nearly 21,000,000 shares in Barrick Gold, with a value of nearly $650,000,000.

By now, all Gold Bugs & Silver Bugs and most Gold & SIlver Investors know this news, so there's no sense in re-hashing the points here, but suffice to say that Warren Buffett's sudden "about-face" towards gold as if gold were coming out of the closet and gaining widespread mainstream acceptance. After all, if one of the most legendary investors is investing in gold, then if a humble, hard-working saver has some money to invest, well, he or she should not feel bad for investing in gold too. Moreover, the MSM anti-gold propaganda has been thick for many decades, including from Warren Buffett himself, but now, it's agreed that Gold & Silver are rock-solid investments.

Pun and no pun intended.

One final point: These two big fundamental reasons feed off of each other.

That is to say, whereas a husband and wife may be deciding how to save or even invest the "free money", it's no longer weird to talk about Gold & Silver.

Not that it ever was.

But then again, I am a Silver Bug, so I'm biased like that. 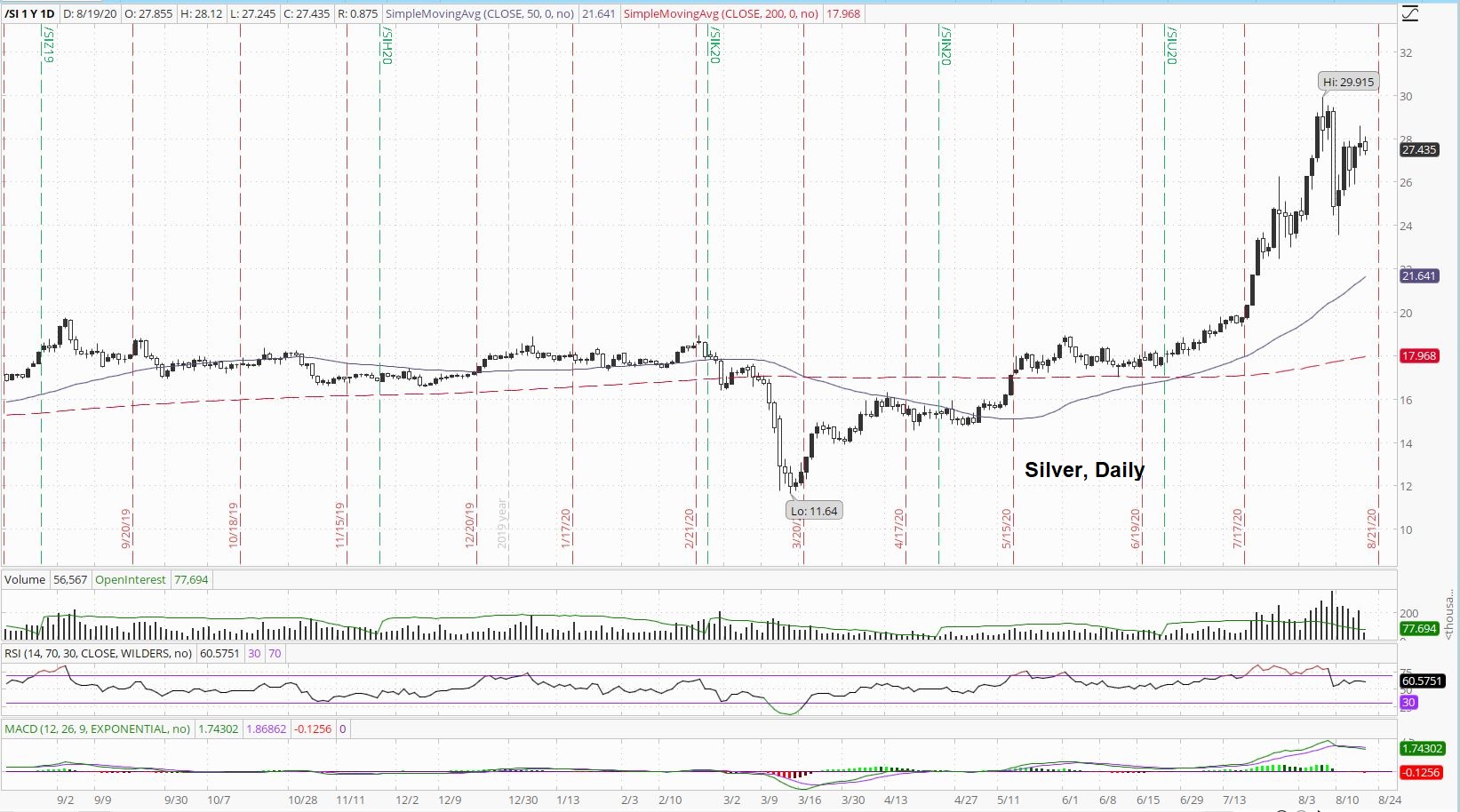 A lot of technical analysts are not satisfied with such a fast recovery, and a lot of bulls are indeed nervous that we could be putting in a lower-high.

Granted, if one's investment is physical Gold & Silver in-hand, and not the paper, over-financialized Wall Street markets, then it's a great time to load up on popcorn! 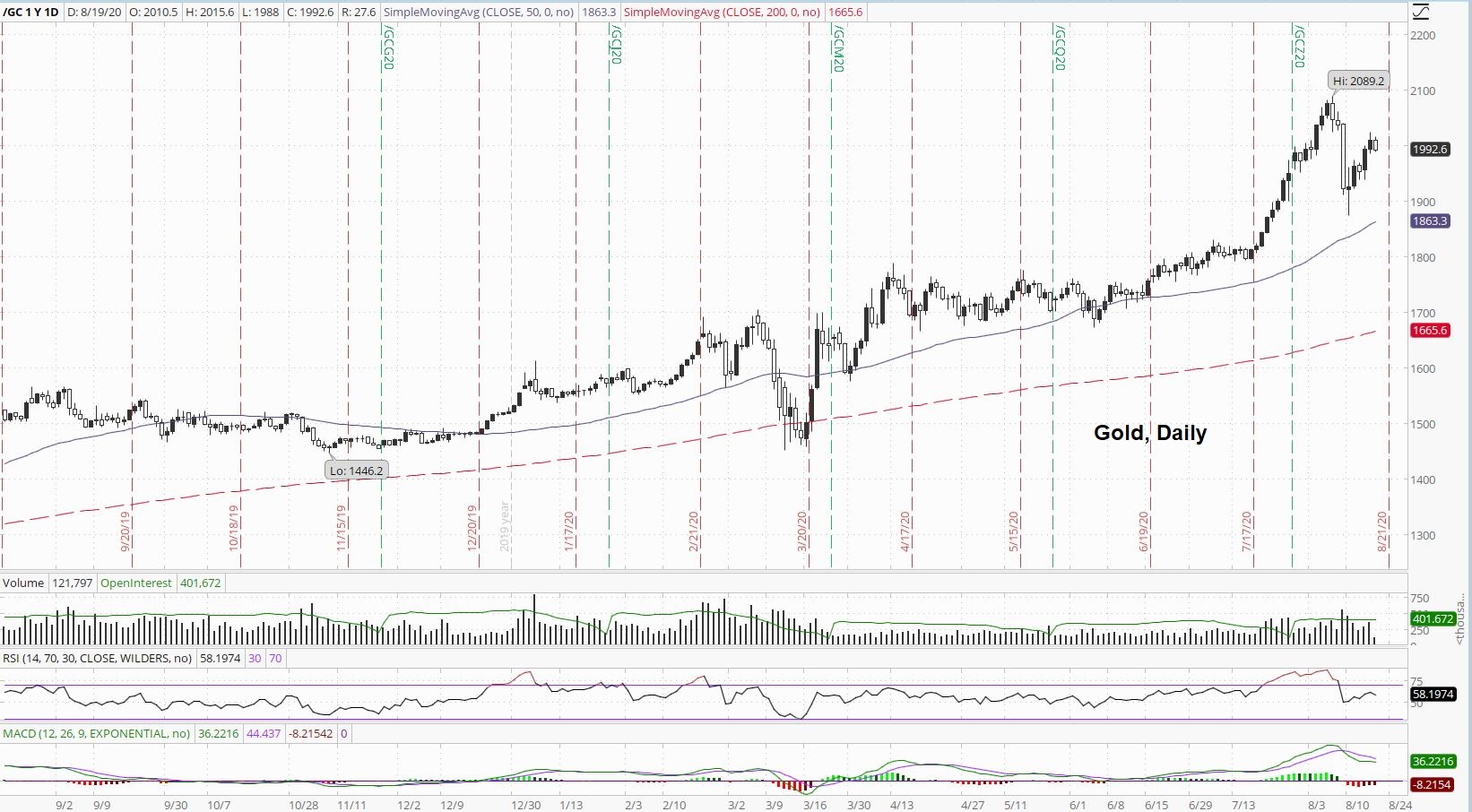 Many analysts are attributing the move solely to the Warren Buffett news, but again, if CARES 4 is a "buy the news" event, could it not be argued that we should have some pretty stout support, if not at $2000 then at least above $1900 as a new wave of buyers prepares to come into the Gold market?

The paper Gold-to-SIlver Ratio began the week with a 72-handle, and is sitting at a 72-handle midweek: 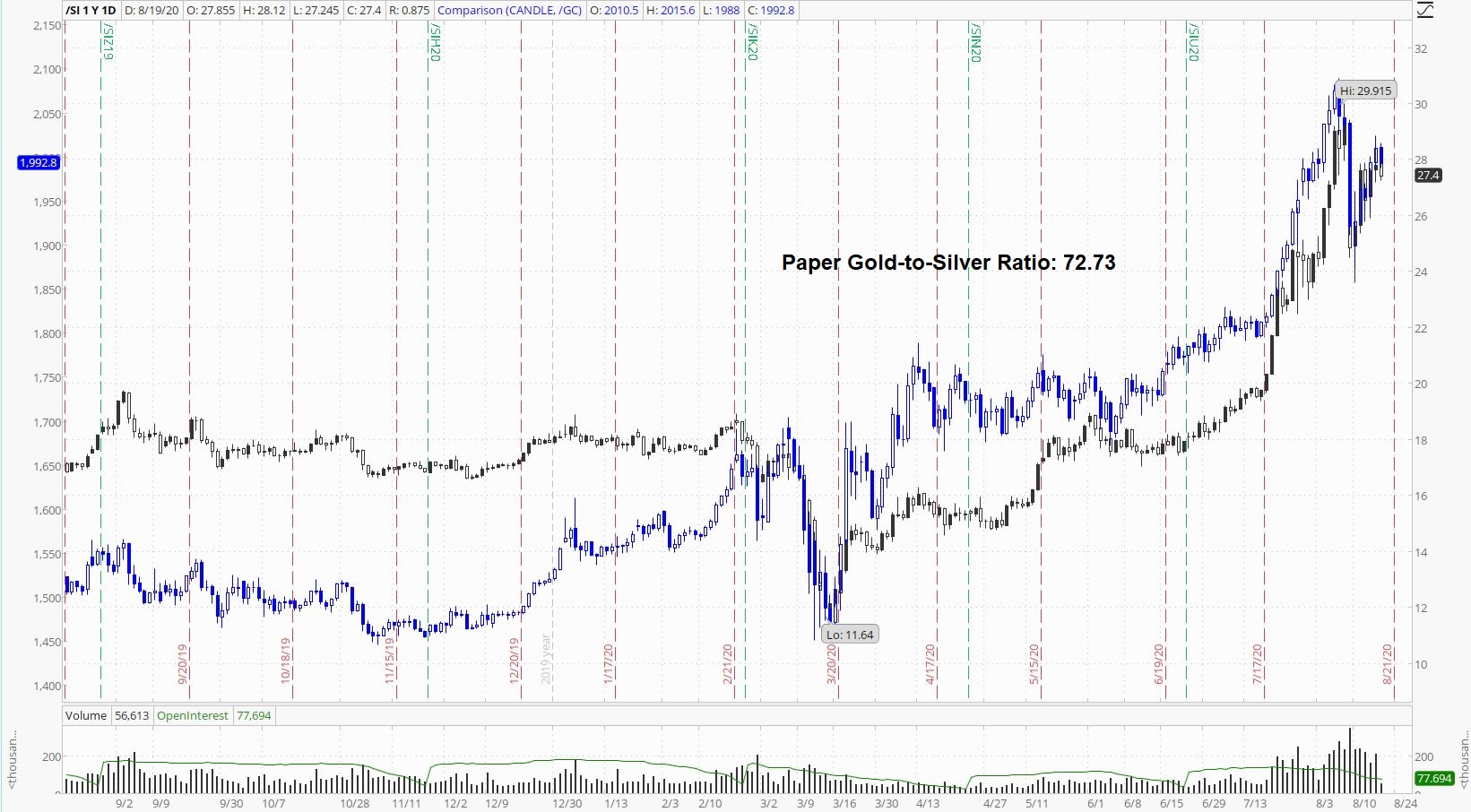 If gold is consolidating above $1900 however, with a new wave of buyers coming into the market, including now the Oracle of Omaha's green light to "institutional investors", AKA the "big, smart money", silver has a lot of catching up to do to gold, especially with silver so far away from its all-time record highs.

Palladium's short-term trend has been a bearish fade with potentially a second lower-high: 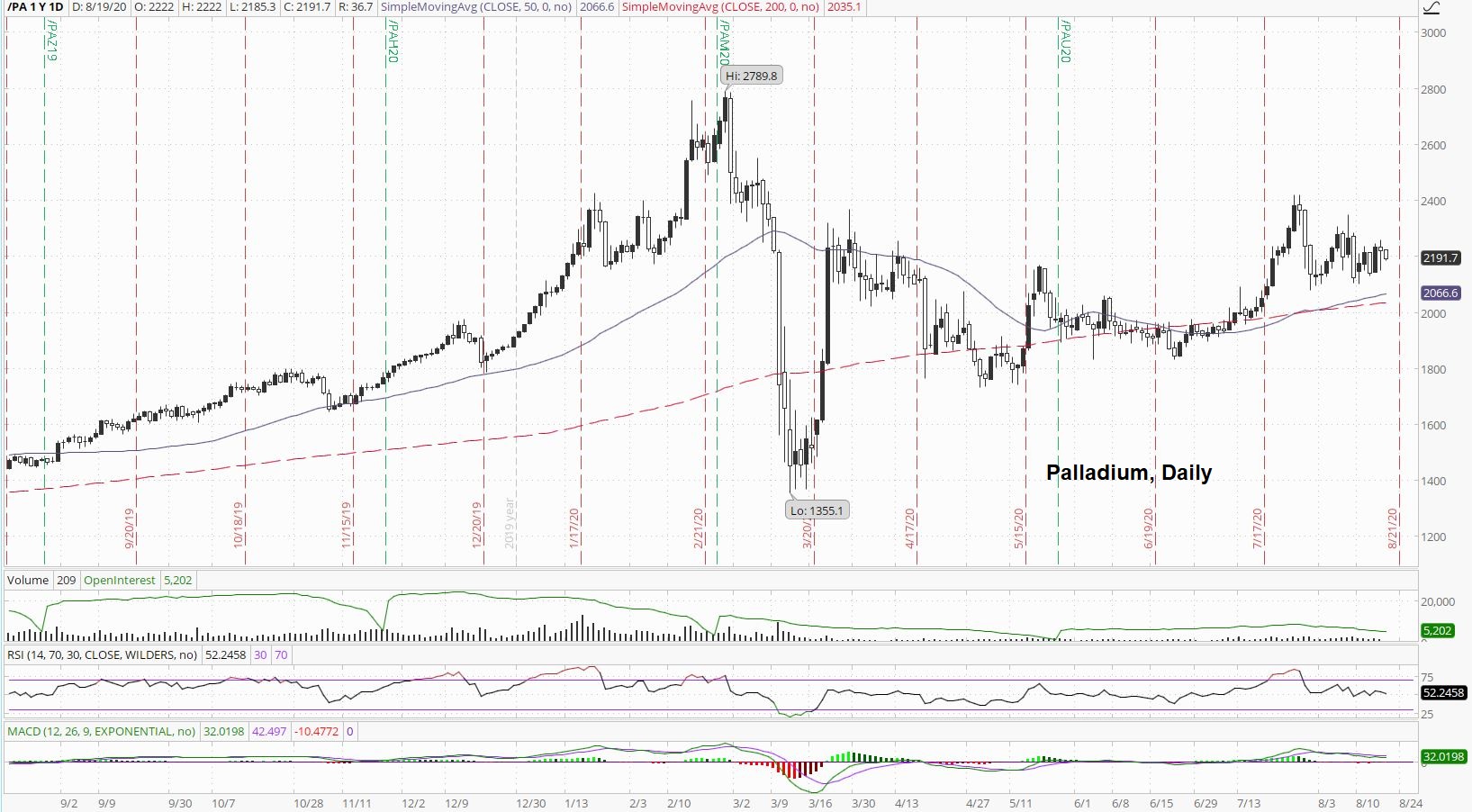 It is nice to see the technicals becoming neutral, however. 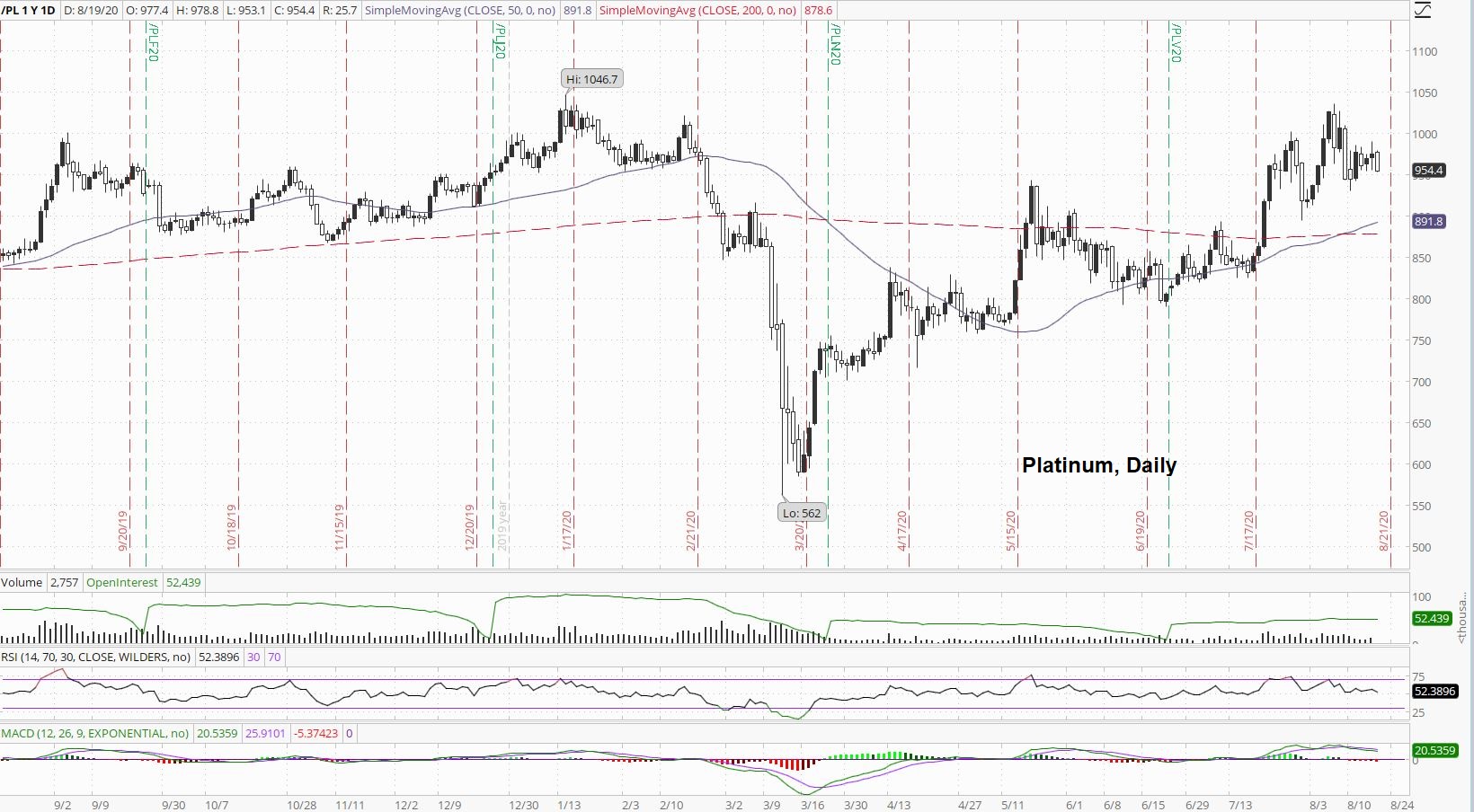 There is no denying the bullishness of the "golden cross". 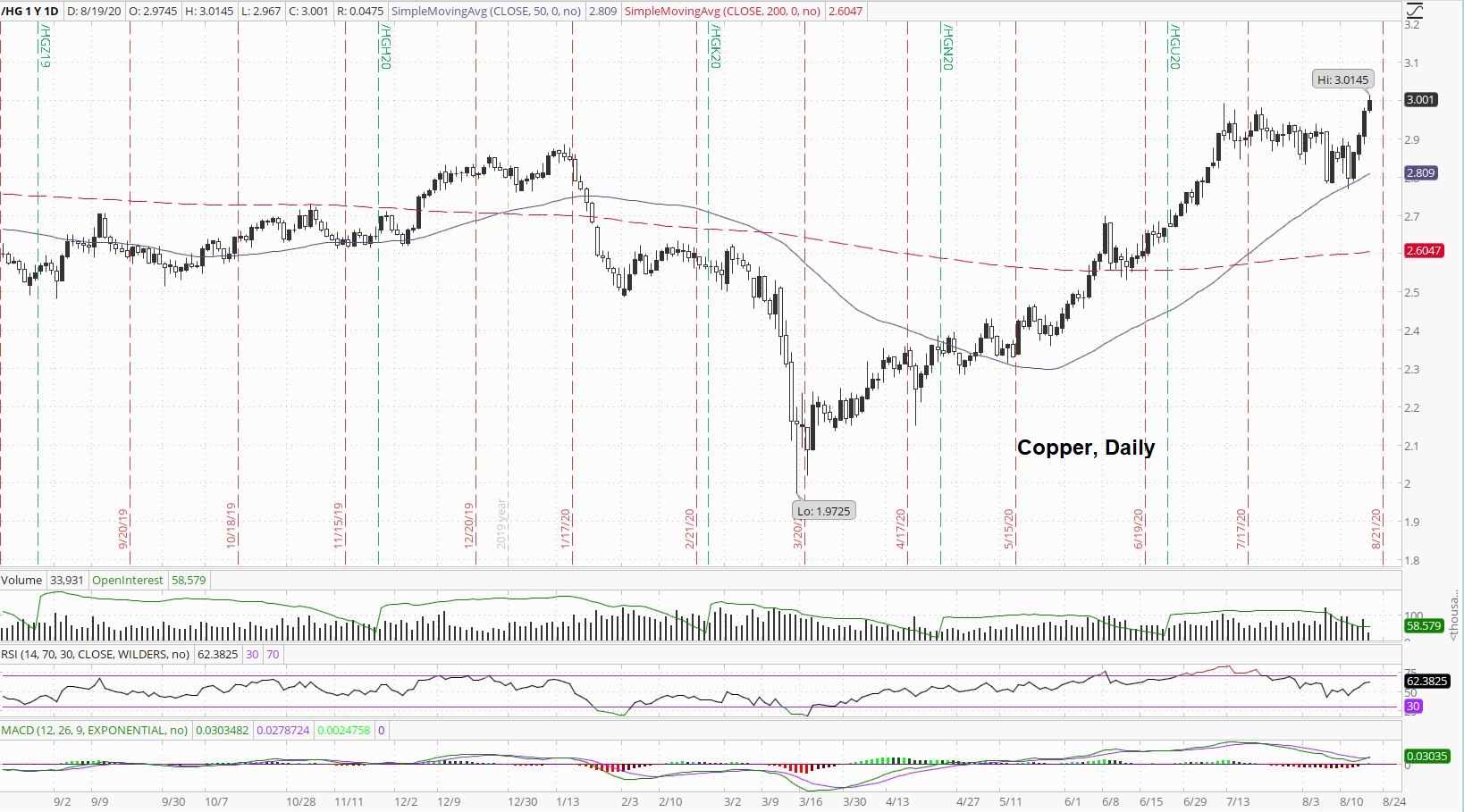 To me, copper is signaling commodity price inflation is here.

Even if crude oil is not sharing Dr. Copper's current price-increasing optimism: 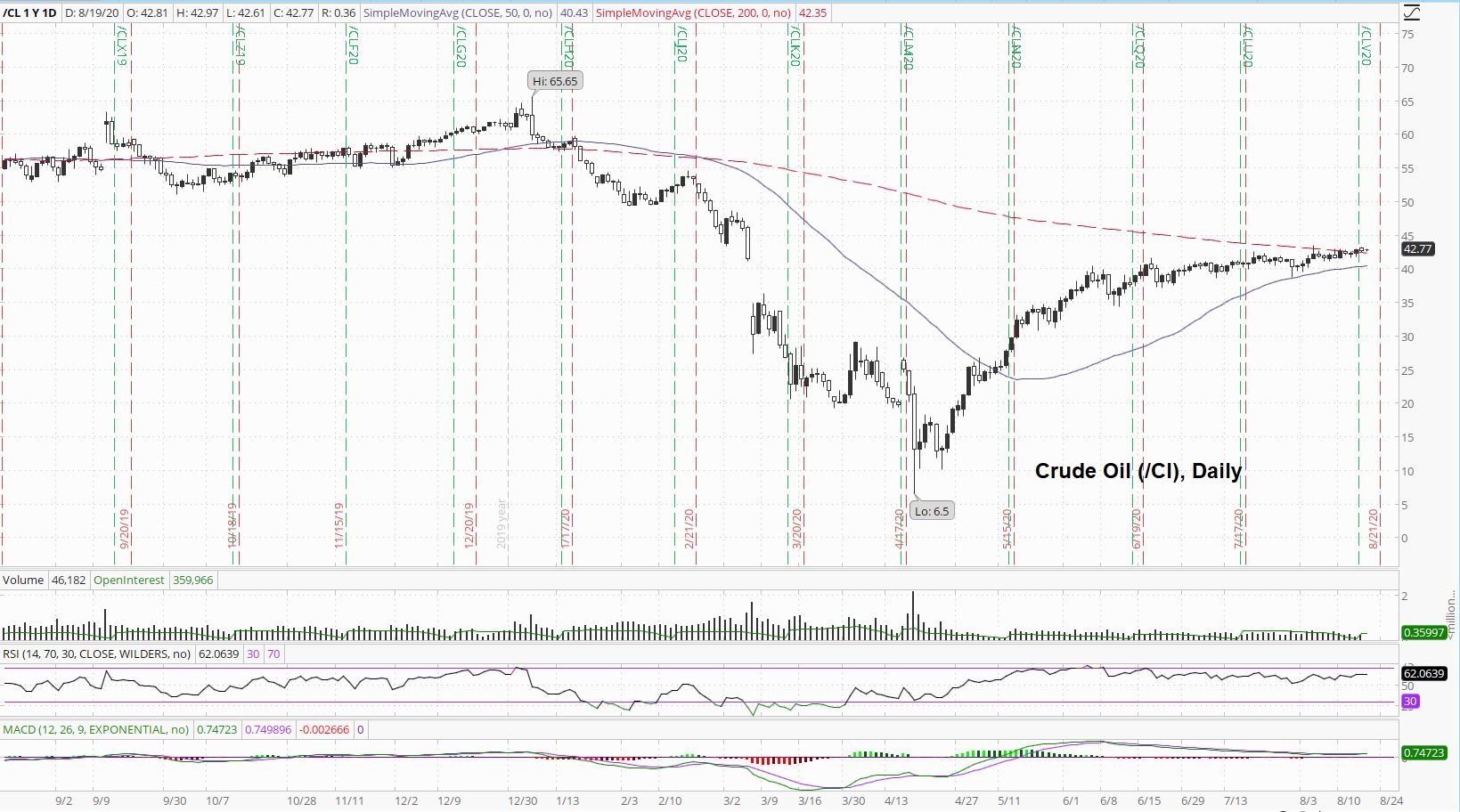 Crude oil is a tough one to call, however, because it is both consumed and it is difficult to store, and current consumption, demand, and supply dynamics are still unfolding with pre and post coronavirus lockdowns, shutdowns, quarantines and the like. 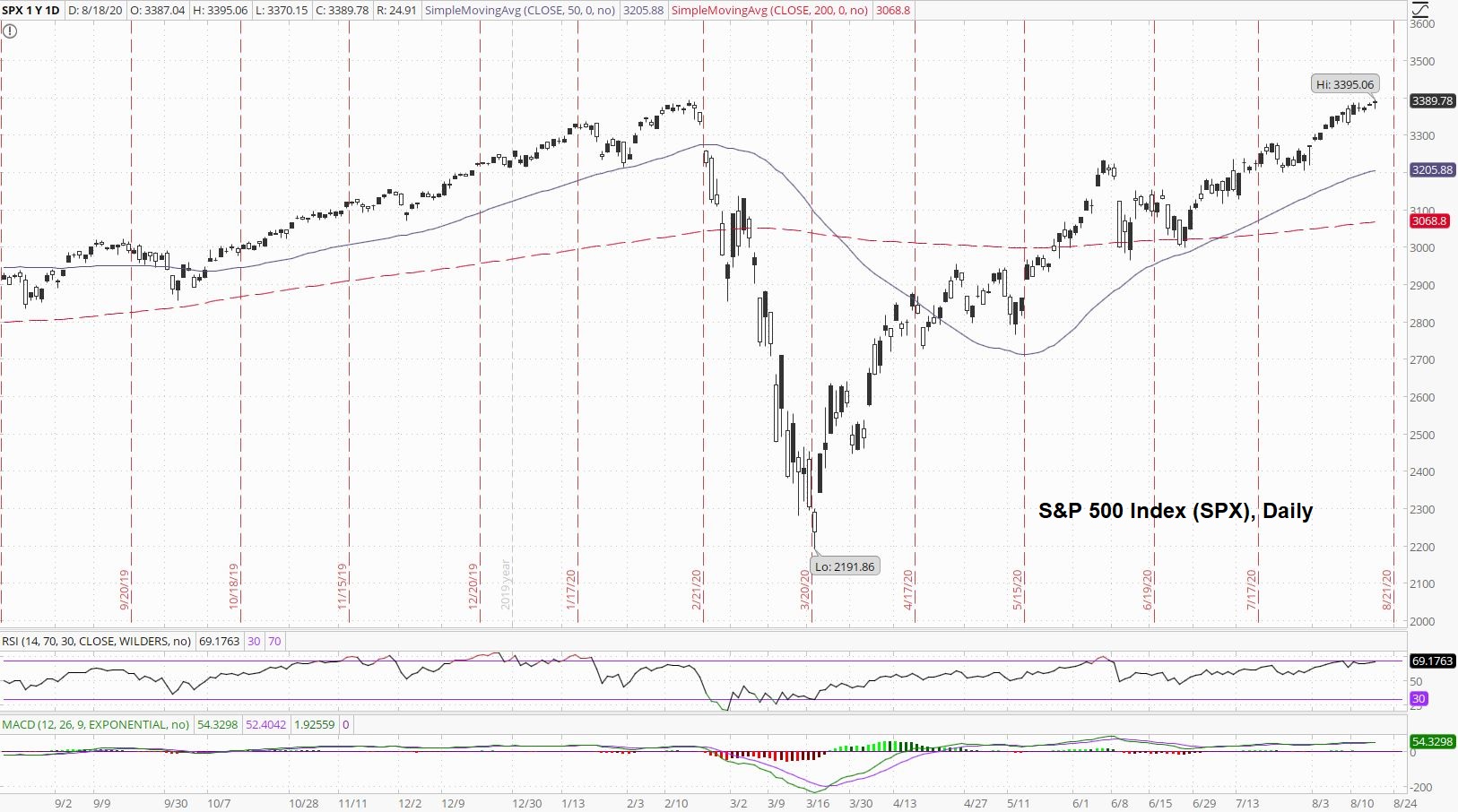 Wall Street may have had a Fed-induced "V"-shaped recovery, but what about Main Street?

Regardless, market participants are nearly totally lulled back to sleep: 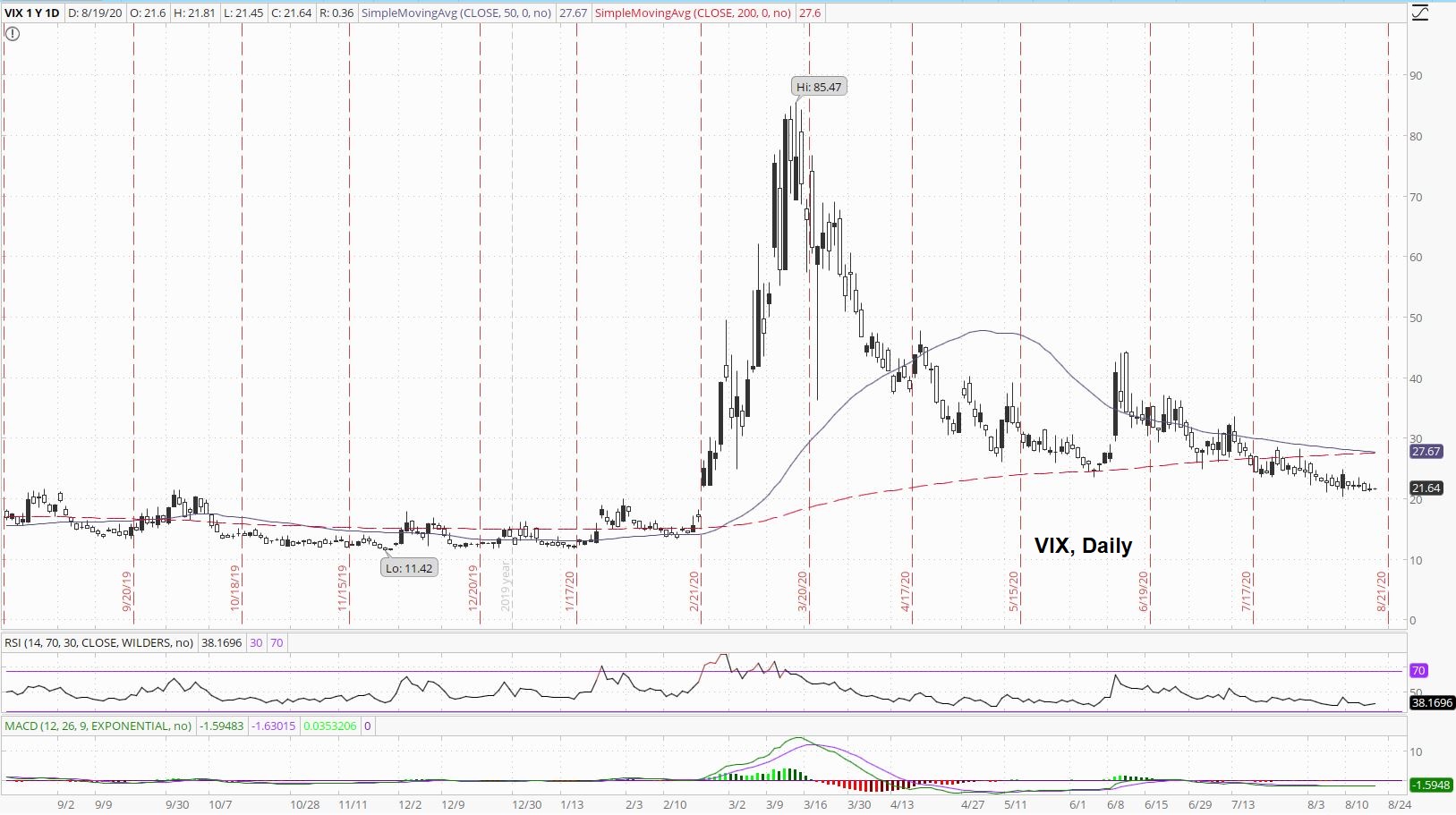 Sure, the stock market is exciting, but when it only ever goes up, incrementally, reaching all-time high after all-time high as if pre-programmed little "buy" orders execute after certain parameters get triggered, fear can never come back into the market?

Here's the question: The Fed may think they can keep stocks propped up with nary a fear in the market, but if the market never goes down, is that not a pre-requisite for hyperinflation?

In that regard, the Fed, being the buyer of last, and first, resort, can surely print up enough fiat to crush interest rates: 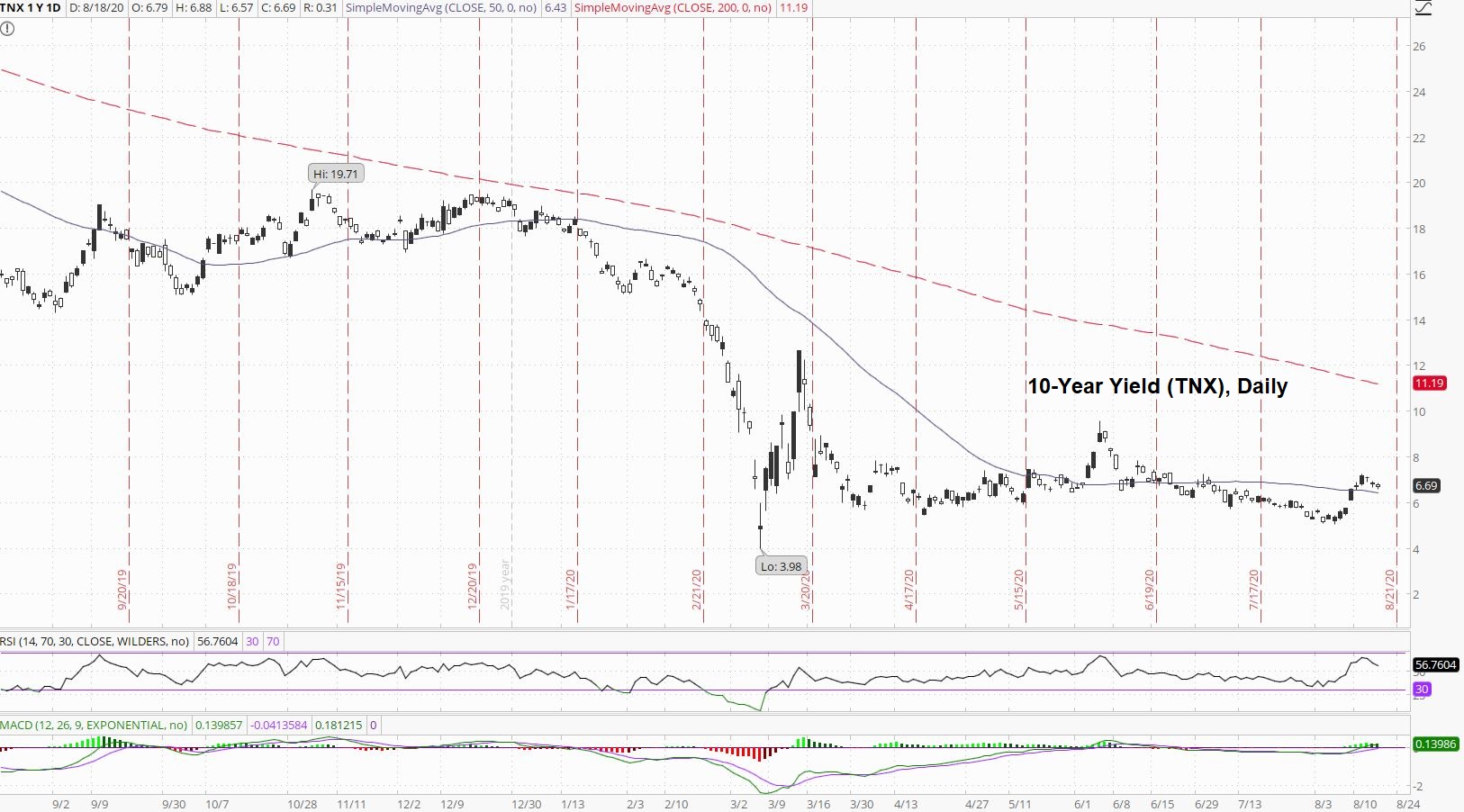 Again, at what cost to the value of the currency?

Currency which is not looking so hot right now: 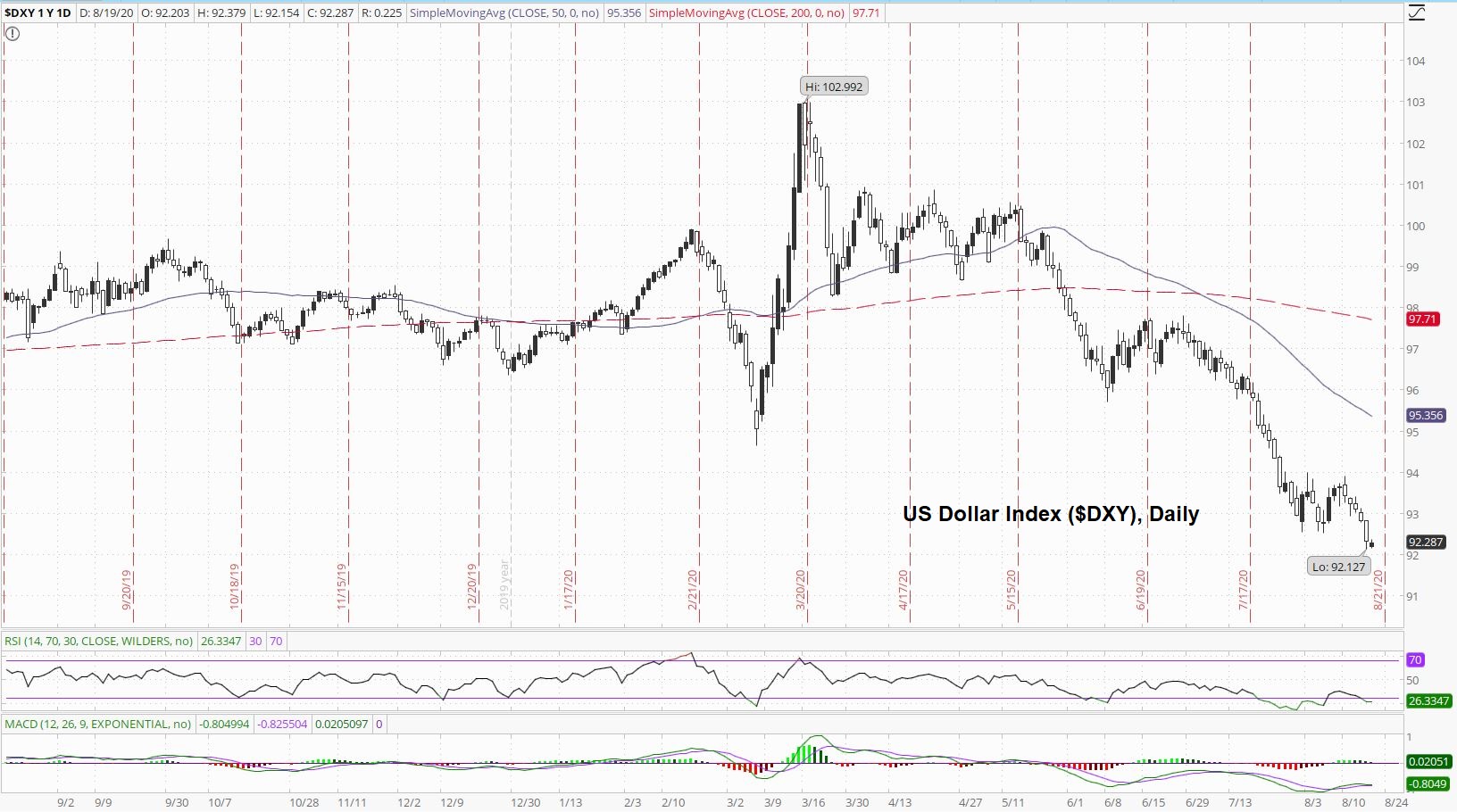 It is a race to the bottom, and the bottoms' nearly falling out of the US Dollar Index.