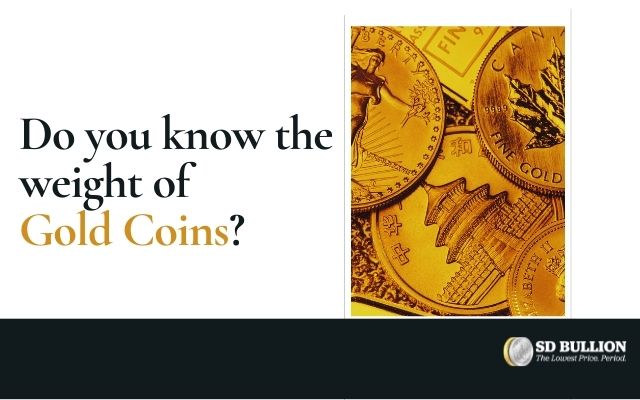 How Heavy Is A Gold Coin?

Humanity’s fondness of shiny, precious metals such as gold isn’t something that came to be about overnight. With man’s possession of gold dating back centuries, the bright yellow metal has been considered a valuable acquisition and a symbol of affluence, as well as being exclusive to a certain group or elite. Nevertheless, one can say for certain that such a scenario has taken a turn in the modern days, as gold and precious metals alike have been increasingly more accessible to the average person, through fair, well-established sellers and retailers such as SD Bullion.

The gold coin, arguably the most notorious medium that this precious metal makes itself available, is sought out by many that want to acquire a tangible asset to their investment portfolio. Whatever the case may be, if one is looking to buy the prestigious coins - or, perhaps, is only curious -, this begs the question: how heavy are gold coins?

Assessing the weight of a gold coin might be a task that is up to many variables, such as the coin’s origin, date, and denomination. However, in the modern bullion industry, even though they bear a multitude of different gold coins, many minting facilities provide valuable information that helps in providing an answer to such a question.

When talking about gold coins, it is important to understand that they are generally manufactured by sovereign governmental mints or private mints backed by a sovereign government, each to their own country of operations. For that matter, a few variations of coin weight may occur, as the minting process follows a certain standard that speaks individually to each mintmark.

On a general note, such variations tend to occur due to factors such as the coin’s purity, their metal content, and overall melt value. For that matter, this makes for certain coins to be tougher than others, bringing about themselves better scuff-resistance in what they might lack in extreme purity.

On top of that, one should be aware of the different terms that they might stumble upon when browsing the different series of coins, and what exactly that means to the physical object’s weight. The most common term, if we’re talking about bullion coins, definitely has to do with ounces.

A troy ounce is a unit of measure used for weighing precious metals, hence their widespread use in the bullion industry. It is not to be confused with the avoirdupois ounce, or regular ounce, which Americans use on a daily basis to measure food and other items.

One troy ounce is equivalent to 31.1 grams in the metric system, while the regular ounce translates to 28.348 grams. Their abbreviation can be seen as “t oz” or “oz t” for the troy ounce, though due to their standard use in the precious metal industry - as a way to assess purity and consistency over time -, it is commonly referred to as “oz” or “ounce”.

Although imperial measures such as the ounce are commonly used in the gold bullion industry, more and more minting facilities have started to use the gram to measure their products. Even though you can’t deny the influence of regular and troy ounces, it is essential to understand their metric counterparts as a way to best assess a bullion product’s composition and purity.

The metric system was introduced in France, in the mid-1700s. It consists of a decimal nature, seeing that it’s always based around powers of 10: a tenth of a gram is a milligram, a thousand grams make for a kilogram, and so on.

The imperial system, on the other hand, generally not decimal, has its origins in the British empire and consists of (avoirdupois) ounces, a pound, and stones when talking about weight or mass.

With all these concepts in mind, the different coin series and bullion products that one might stumble upon while browsing SD Bullion get a lot more simple, and a few examples are worth taking a look upon.

Undoubtedly the most popular gold coin in the world and minted by the US Mint, the American Gold Eagle was introduced in 1986 and has been a top pick between investors and collectors ever since. The gold eagle is considered legal tender in the United States, with face value denominations of $5, $10, $25, and $50.

American Gold Eagles consist of 22-karat gold, having each coin weigh a bit more than their gold weight. This is due to the fact that the golden eagles have a composition of 91.67% gold, with the leftover 8.33% consisting of a silver and copper alloy. This gives the coin a unique hardness and scuff resistance, making for an attractive selling point for those planning on making their purchase.

The gold American eagle is minted in four different sizes and denominations:

- Following the same composition of pure gold along with a silver and copper alloy, the ½ oz gold eagle weighs in at 16.96 grams, consisting of a .5 gold troy ounce. It has a face value of $25.

- The quarter-ounce American Gold Eagle follows the same minting procedure, consisting of a .25 gold troy ounce, and weighs in at 8.48 grams. It has a face value of $10.

- The tenth-ounce American eagle gold coin weighs in at 3.39 grams, and consists of .1 troy ounce of pure gold. It has a face value of $5.

The Canadian Gold Maple Leafs were first struck back in 1979, and are issued by the Royal Canadian Mint. They are among the top picks for an investor and coin collector around the world, due to their .9999 fine gold purity (beginning in the final months of 1982, succeeding the previous .999 purity) and all-around semi-numismatic value.

Considered one of the purest gold coins in the bullion market, the Gold Maple Leafs are minted in 6 different sizes:

- Introduced in 2014, the 1 gram gold coin is the latest addition to the Royal Canadian Mint’s gold coins portfolio. It consists of .03215 gold troy ounce and has an assigned face value of $.50.

- Also minted of 24-karat gold, the half-ounce Canadian gold maple leaf has a .5 pure gold troy ounce composition or 15.55 grams. It has a face value of $25.

- The quarter-ounce gold maple leaf coin follows the same procedure and boasts .25 troy ounce of pure gold content. It weighs in at 7.775 grams and has an assigned denomination of $10.

- The twentieth-ounce golden leaf consists of .05 pure gold troy oz, and weighs in at 1.555 grams. It has a $1 denomination.

The Chinese Gold Pandas are one of the world’s most collectible gold sovereign coins, being in high demand every year amongst investors and collectors since their introduction in 1982. This is due to the fact that, with only one exception throughout their span of market activity, the panda design has changed every year, offering buyers something different with each annual release.

The golden pandas are minted with a .999 fine gold purity, with a weight similar to the Canadian Gold Maple Leafs. Previously minted in sizes of 1, ½, ¼, 1/10, and 1/20 ozt, the gold pandas saw a change in 2016 when the first Gold Panda was minted using the metric weight. Ever since, the Chinese Mint has issued their golden coins under the metric system, which are minted in the following sizes:

- Though conversion is not exact, the 30-gram gold panda is equivalent to their other 1 oz gold coin counterparts. They sit just below 1 troy ounce of .999 fine gold (equivalent to 31.1 grams), consisting of .9645 ozt. It has an assigned face value of 500 yuan.

Following a similar procedure, other sovereign government mints and private mints have their own gold coin series that does not fall short of delivering some of the industry’s finest metal contents, along with top-notch craftsmanship. Some examples of such are:

- First minted in 1987, the gold Britannia coins are composed of 1 troy ounce of .9999 fine gold. However, although many government-backed coins usually come in different weights and sizes, the Gold Britannias are only minted in a 1 troy ounce weight.

Is Gold Heavier Than Silver? 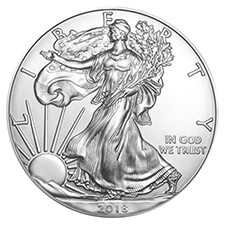 If comparing two sides, one made up of a silver piece while the other made of a gold piece, and they both weigh the same (say 1 oz, for instance), then, logically, they are equal, and one isn’t heavier than the other.

However, this topic often comes up when comparing the sizes of the bullion products in question. Due to the density of their main metal, gold products are often much smaller than silver products, while having the same weight. If both the gold and silver coin boast the same measures, you can expect a much heavier coin on the golden side.

Check out our article that answers the question: Is gold heavier than silver.

If you are looking to take an initial step or expand your gold coin holdings from any of the mentioned mints, then search no more. Buy any of all mentioned above gold coins here at SD Bullion with the Lowest premium over spot price guaranteed, with safe, discreet, and fast shipping.

We believe in doing business the old-fashioned way, and our customer support is available over the phone at 1(800)294-8732 or through our live web chat feature to solve any queries you might have.