The past week may have included a long holiday weekend, which some people lazily spent leisurely grilling in their backyards, but the holiday-shortened past week in the markets has been the exact opposite for market participants, if not totally downright frightening.

The Nasdaq, for example, hit a fresh all-time record high just last Wednesday, and the very next day began plunging, falling by over 10% in the last three trading days. The S&P plunged too, but peak-to-trough, we're talking about a drop of just over 7%, and the Dow is down just over 5% after breaching 29,000 to the upside for the first time ever.

What has happened over the last week that has caused such a plunge, and how do we know if the plunge is over or if it will continue?

In my opinion, there were two main drivers of the most recent stock market plunge, and in no particular order, those two drivers would be the Covid-19 vaccine disappointment and the fiscal stimulus stalemate.

It is commonly accepted that one of the reasons the stock market has been rising, despite the fact that economic activity on Main Street has collapsed, has been because of hope in the rapid development of a safe and effective Covid-19 vaccine. Where one stands on the controversial subject of vaccines is one thing, but regardless of what any given individual thinks about vaccines, the stock market, overall, for now, accepts vaccines as a good thing. The general fundamental factor is that a safe and effective vaccine will help get Main Street back on its feet.

Last week, there was speculation that a vaccine would even be rolled out by November 1st of this year. Here's Forbes reporting that news last Wednesday, the same day the stock market hit fresh all-time record highs. The speculation stemmed from a late-August CDC letter that instructed all fifty states to prepare for vaccine distribution as early as November 1st. The very next day, however, Dr. Anthony Fauci of the National Institutes of Health (NIH, NIAID) poured cold water on a vaccine being distributed before Election Day by saying that it was "unlikely" there would be a vaccine by then.

Needless to say, if market participants were a bit over-euphoric with hopes of an imminent vaccine, those hopes just met face-to-face with a cold, hard dose of reality and loss.

But wait, there's more! And it's not really good news for the stock market bulls out there, because while past-performance is not an indicator of future results, just yesterday, Tuesday, September 8, 2020, during a virtual health research forum, Dr. Fauci again stated that it is "unlikely" that a vaccine will be ready by Election Day.

The bottom line is that if the stock market has been rallying, in part, because of the pie-in-the-sky vaccine hopes, the stock market is now falling back to earth as market participants price-in slower than hoped-for progress.

Talks regarding the next round of fiscal stimulus continue to be in a stalemate in Congress. On the one hand, the US Treasury has $1.6 trillion on deposit at the Fed (as of September 4th), but on the other hand, Democrats and Republicans can't agree on how to spend some or all of it.

Just yesterday, Senate Republicans introduced a bill for the next round of Fiscal Stimulus, commonly called "Cares 4.0", but that bill is not seen as something that could make it through Congress and onto President Trump's desk, ready for his signature and to be put into law, as is, especially since the bill is lack-luster in its direct support for Main Street. For example, Bloomberg reports the bill doesn't even have the Economic Impact Payments for eligible low-to-moderate income Americans and their eligible children. The bill is seen as doing too little to help the US economy. Furthermore, the supplemental unemployment benefits would also be paired back in the bill to $300 per week, down from the original $600.

Why does this stalemate in Congress matter for the US stock market?

For two reasons: It matters for the direct and indirect consequences.

Specifically, when Americans have more money coming in from the US government, some have undoubtedly put that money directly into the stock market by purchasing stocks, ETFs, and other Wall Street derived equities. This matters because if the money is not flowing from the government to Joe Retail Trader, then the money is not going from Joe Retail Trader into the market. Secondly, if the next round of the CARES Act succeeds in stimulating the US economy, even if only for a while, then one would assume the stock market would price-in improving conditions on Main Street, with the one caveat being that the pricing-in has already been extreme, leading to a severely over-valued stock market.

And by all metrics, yes, the stock market is extremely overvalued, but what exactly do the metrics mean in an era of the so-called "Fed put"?

The bottom line is that the stock market has not been the beneficiary of newfound stimulus, and, as a consequence, is convulsing.

The plunge has indeed been dramatic, best seen with the Nasdaq's cliff-dive: 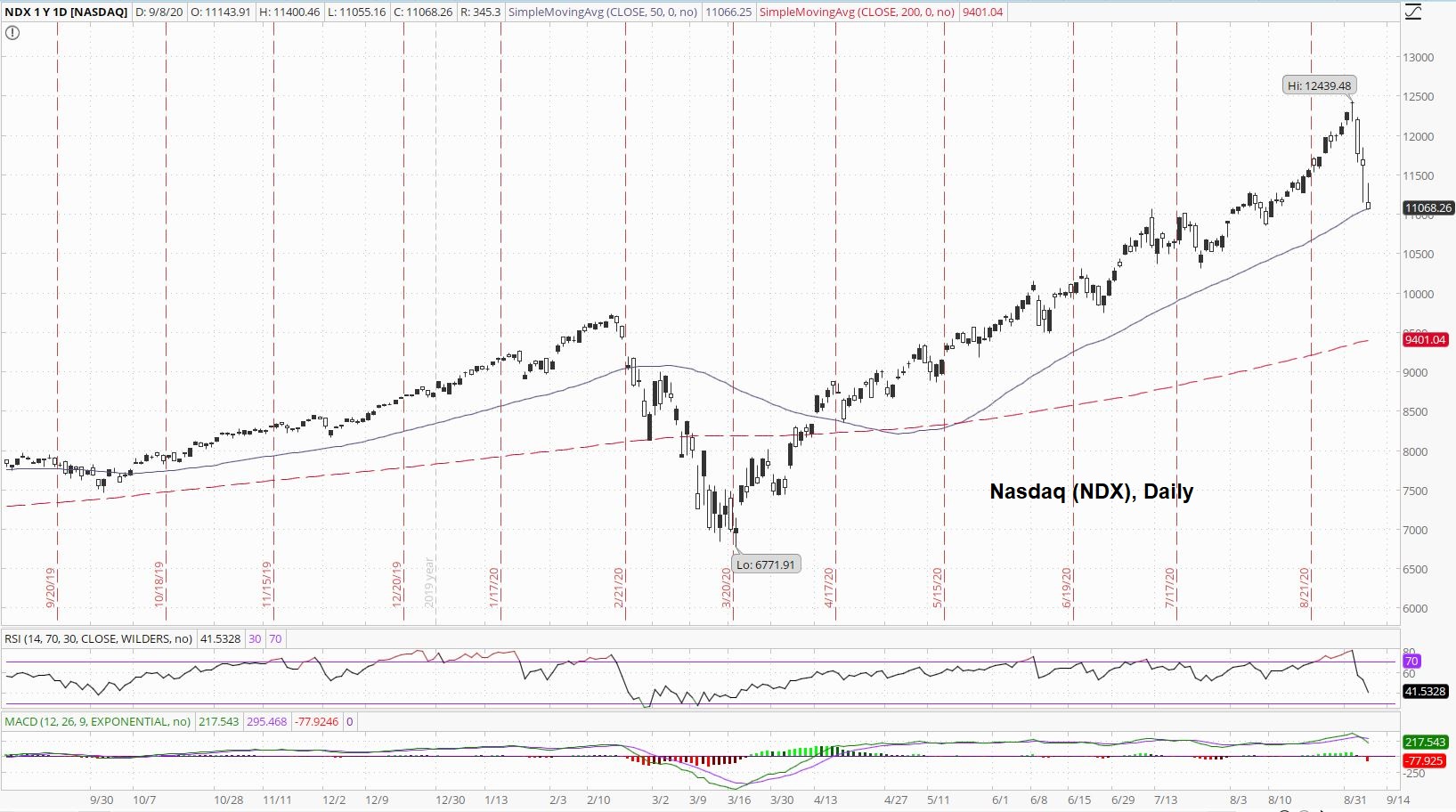 Are we going to get a text-book bounce off of the major moving average (50-day), or does Dr. Fauci's post-Labor Day raining on the stock market's parade still need to be priced-in?

In early March, the VIX looked like it was a break-out fake-out, not unlike the way the VIX looks now: 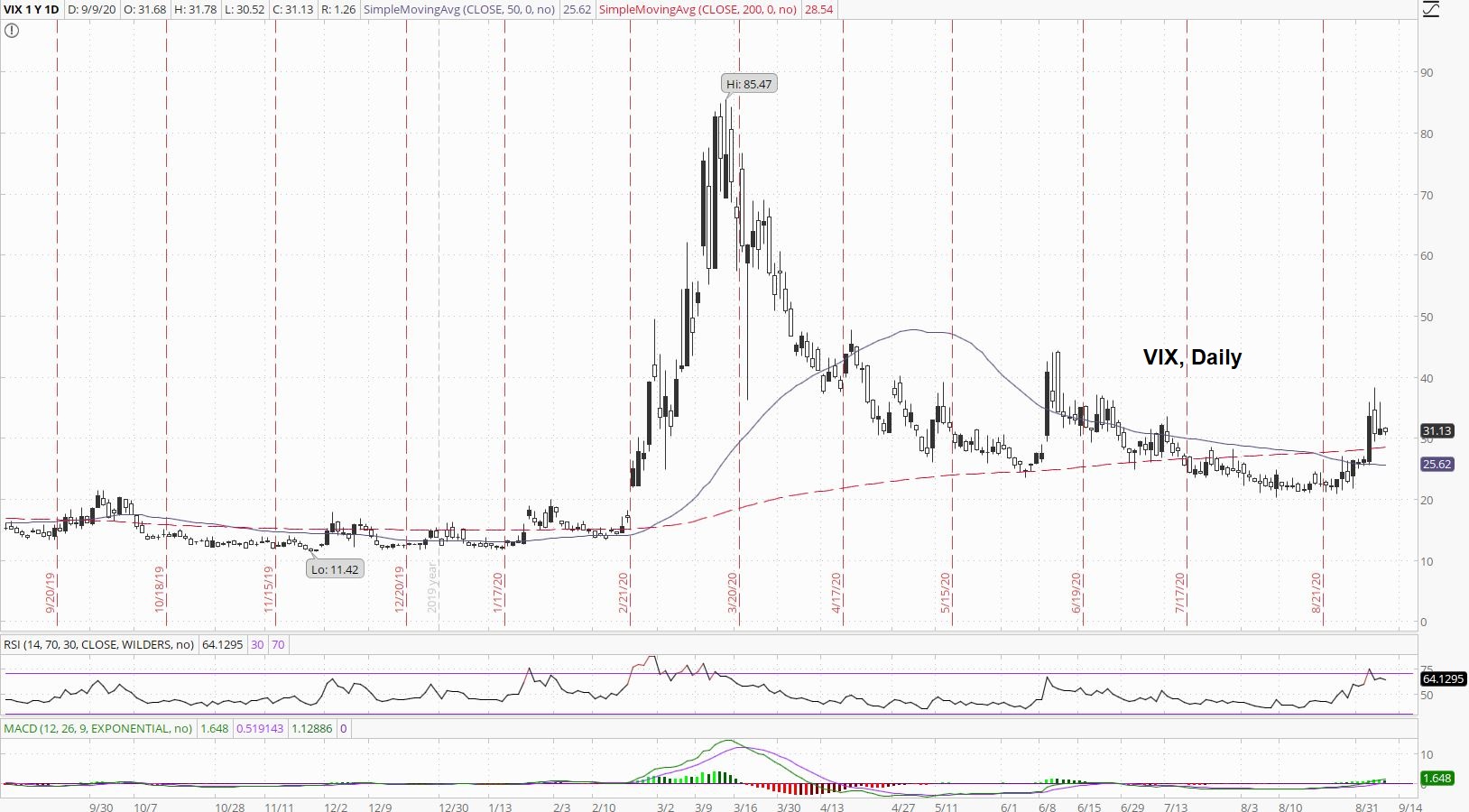 I would not be surprised to see the VIX spike even more before this latest market rout is over.

The yield on the 10-Year Note initially spiked at the start of the current sell-off in the stock market: 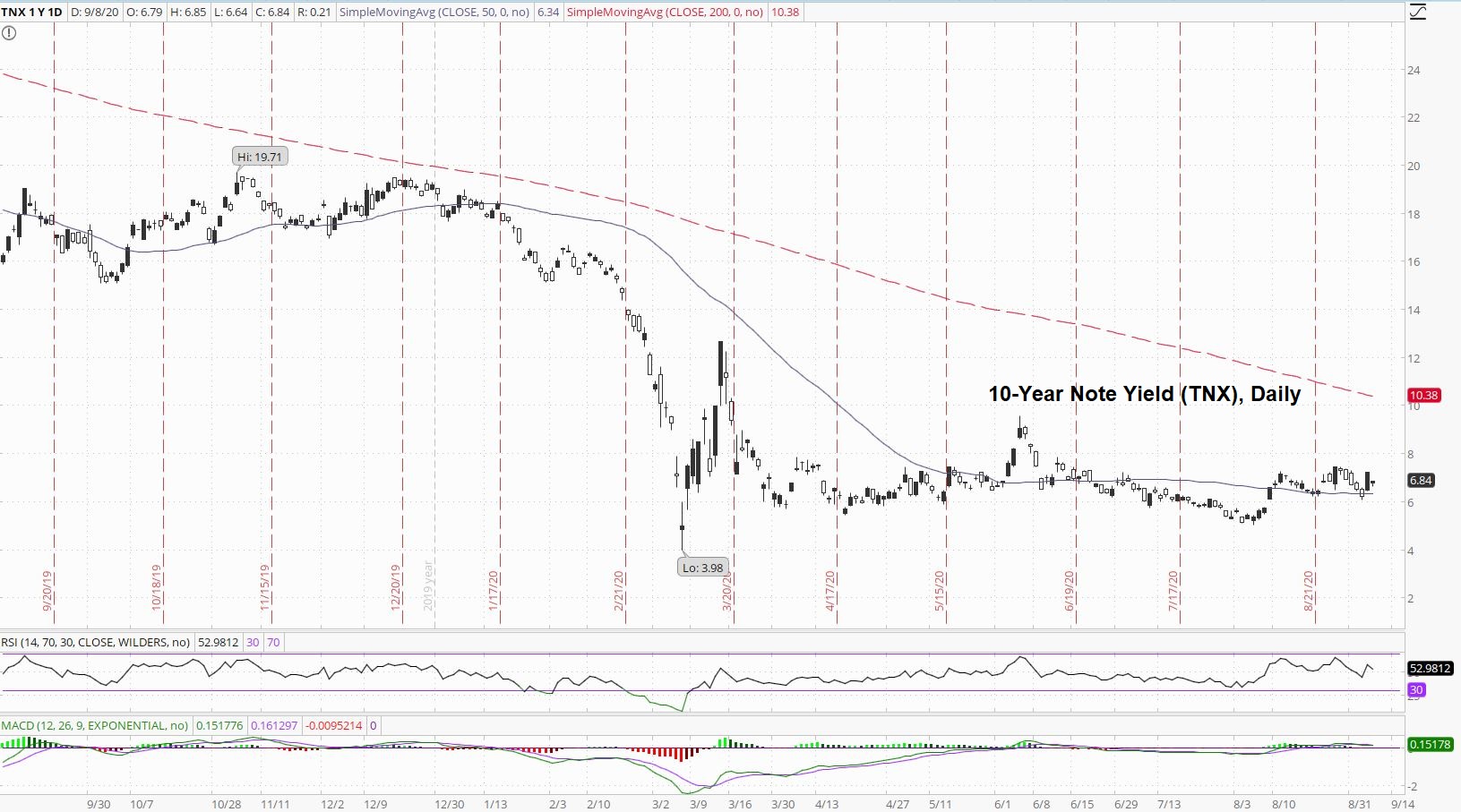 Some in the mainstream financial press would say that's because market participants were liquidating some profitable Treasury holdings to cover losses in equities, and from a gold & silver investor's perspective, that's good news, because it means those holding Gold & Silver are not necessarily liquidating their holdings, which is another way of saying, when it comes to safe havens and "risk-off" in general, Gold & Silver are in strong hands.

The US dollar has put-in its first higher-high: 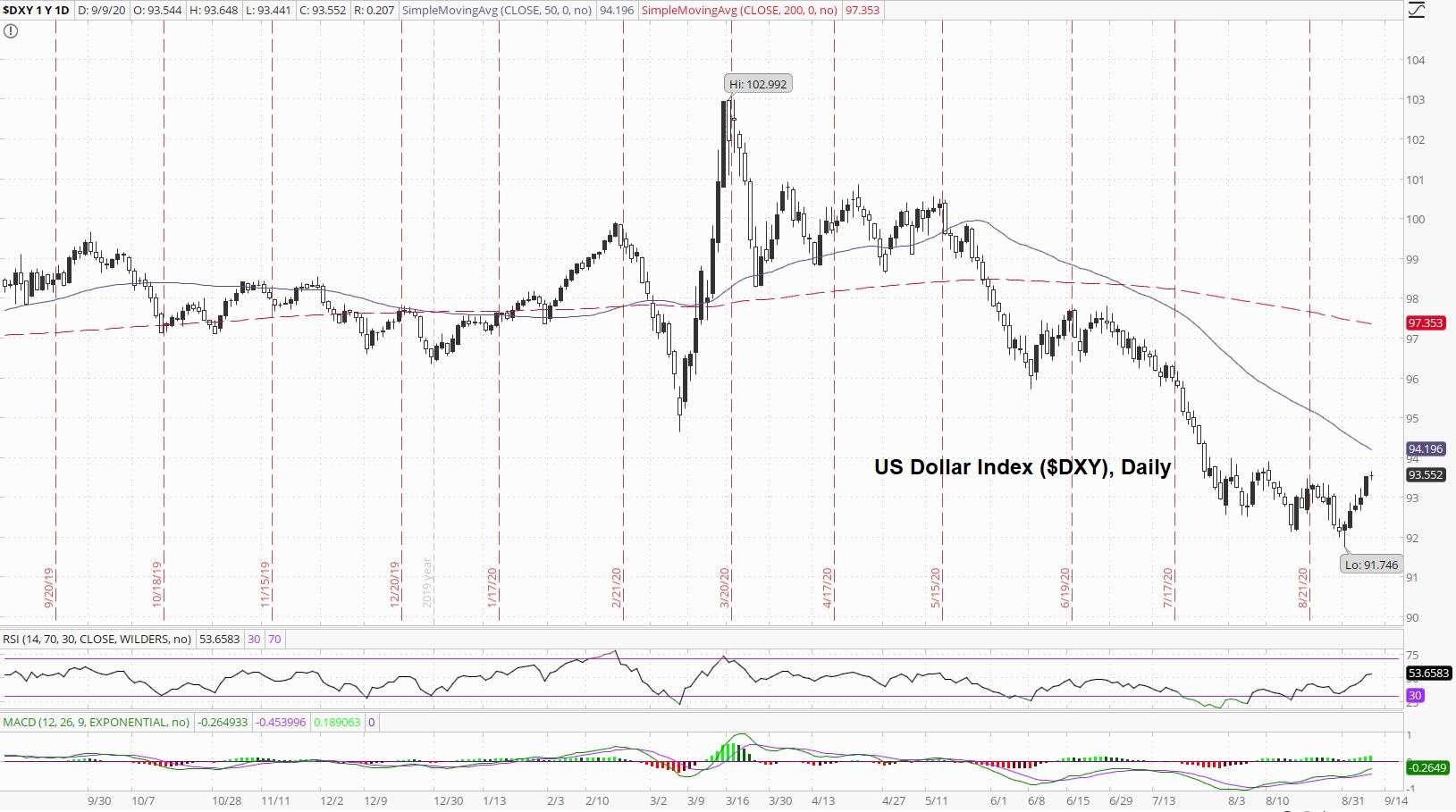 Any strength here in the dollar is a gift to users of dollars, but not really a gift to holders of dollars because even with a slight increase in value, that value is only relative to other un-backed, debt-based fiat currencies.

During this most recent market rout, the priced of crude oil has plummeted nearly 15%: 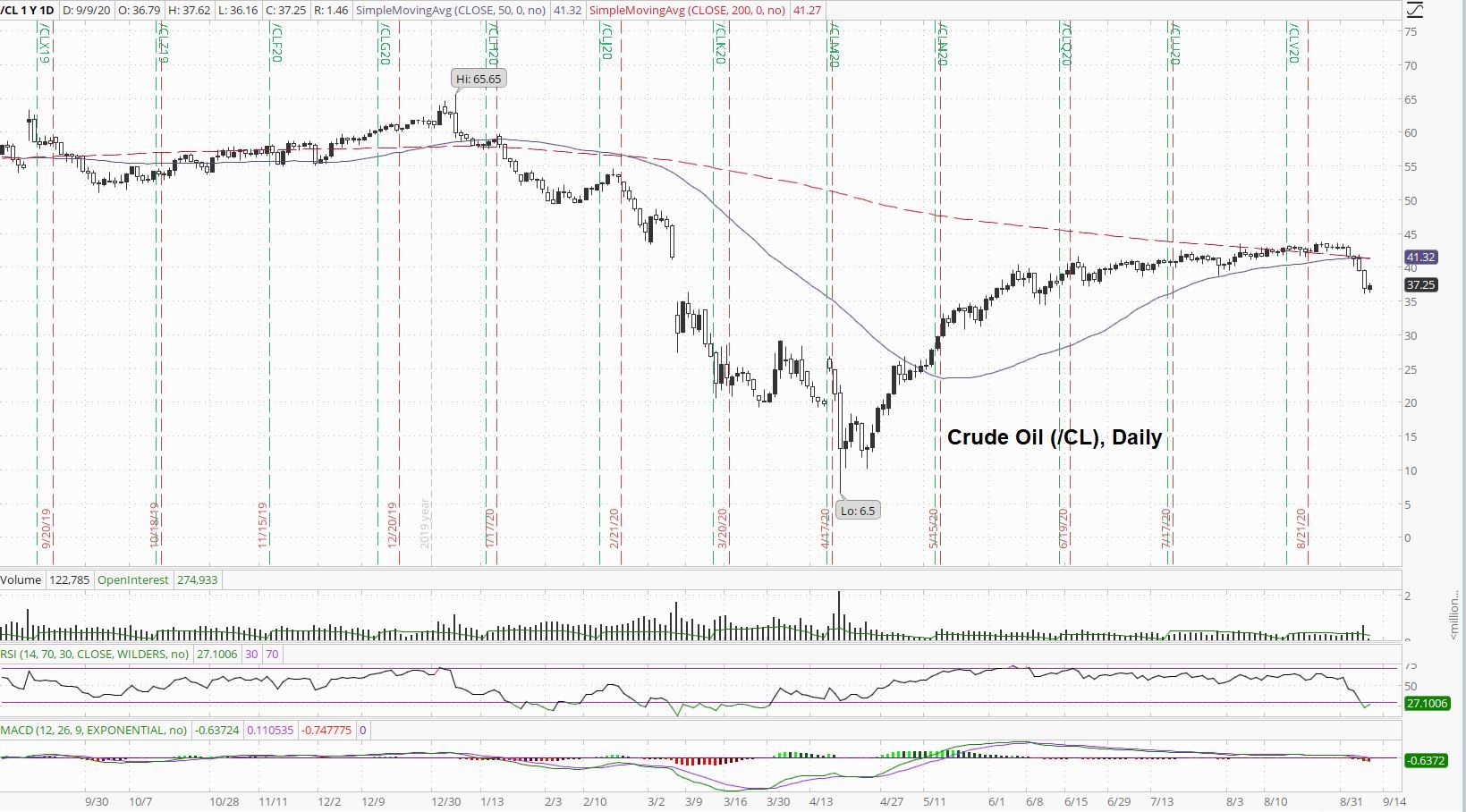 Many technical traders have been waiting for this drop to pile-on to the short-side.

Interesting in all of this, however, is Dr. Copper holding-on at the psychologically-important $3 price level: 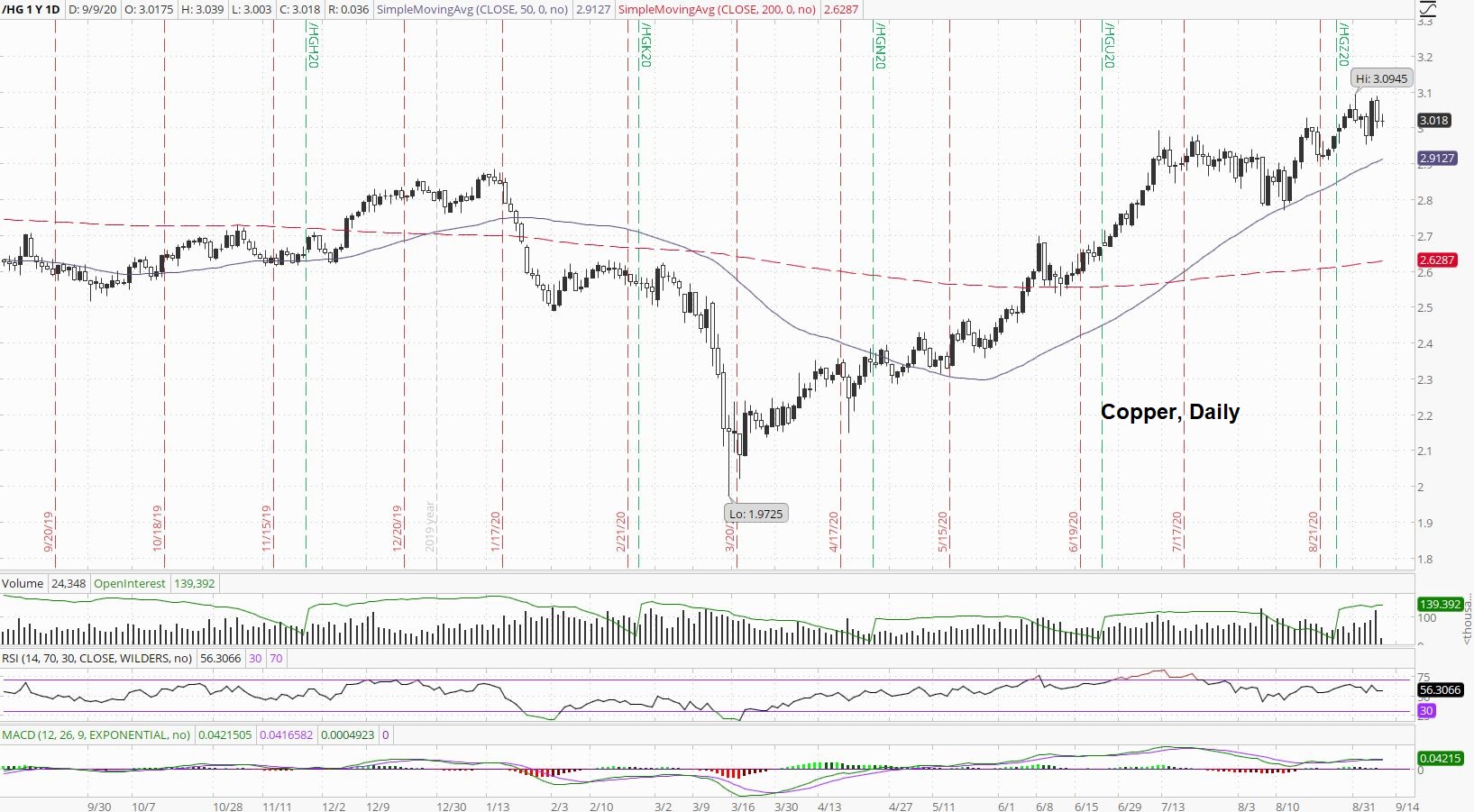 Copper's reluctance to plummet alongside the broader stock market leads me to believe that it's the stock market that's overvalued, whereas the economy on Main Street has already collapsed and the consequences of all of the central banks' money printing are beginning to become real fundamental drivers of commodities price-inflation.

All things considered, palladium has also been holding-up during this most recent market rout: 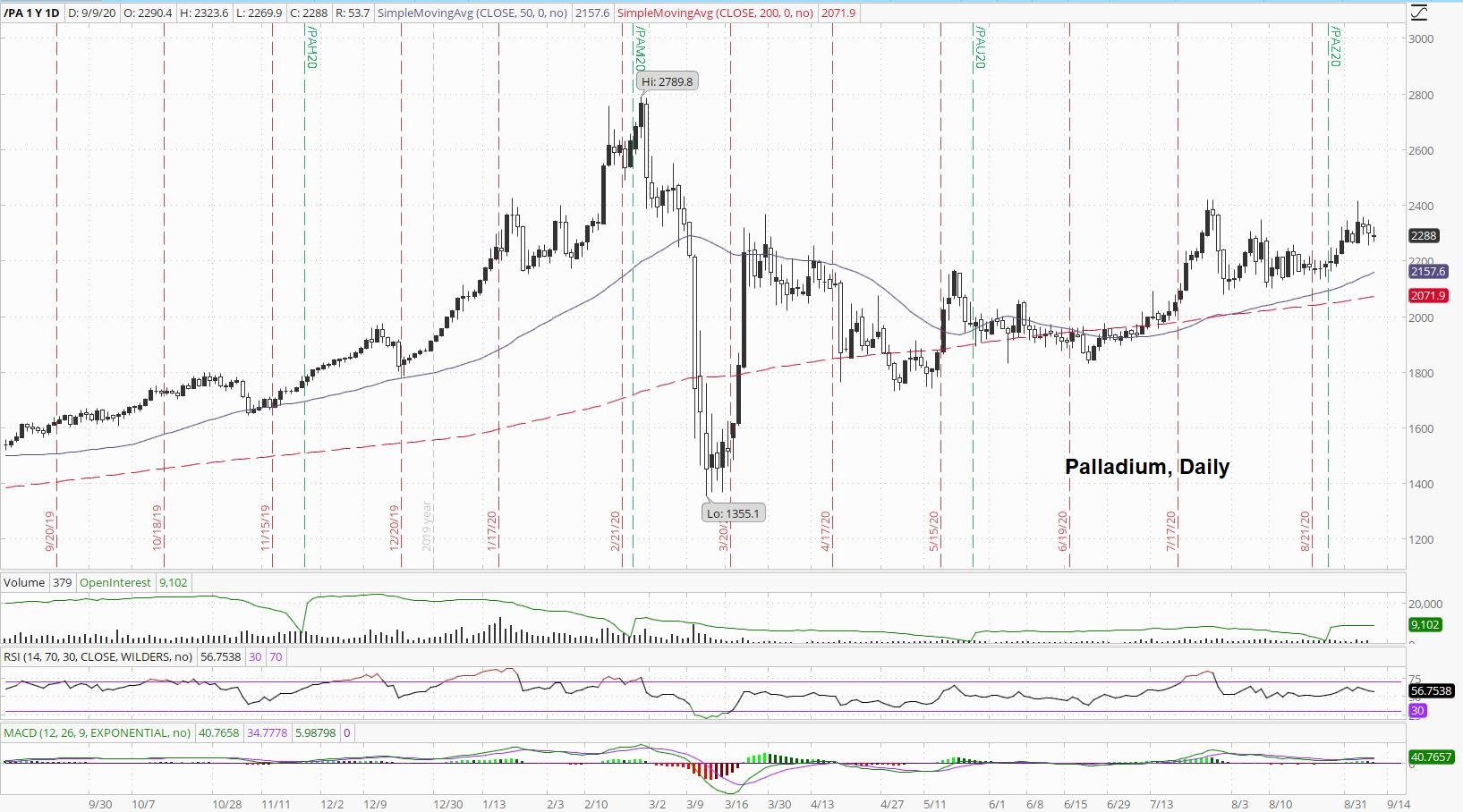 I'm sure the bullish technical analysts are getting pretty excited about that cup-n-handle chart pattern too!

Platinum is finding some near-term support at $900: 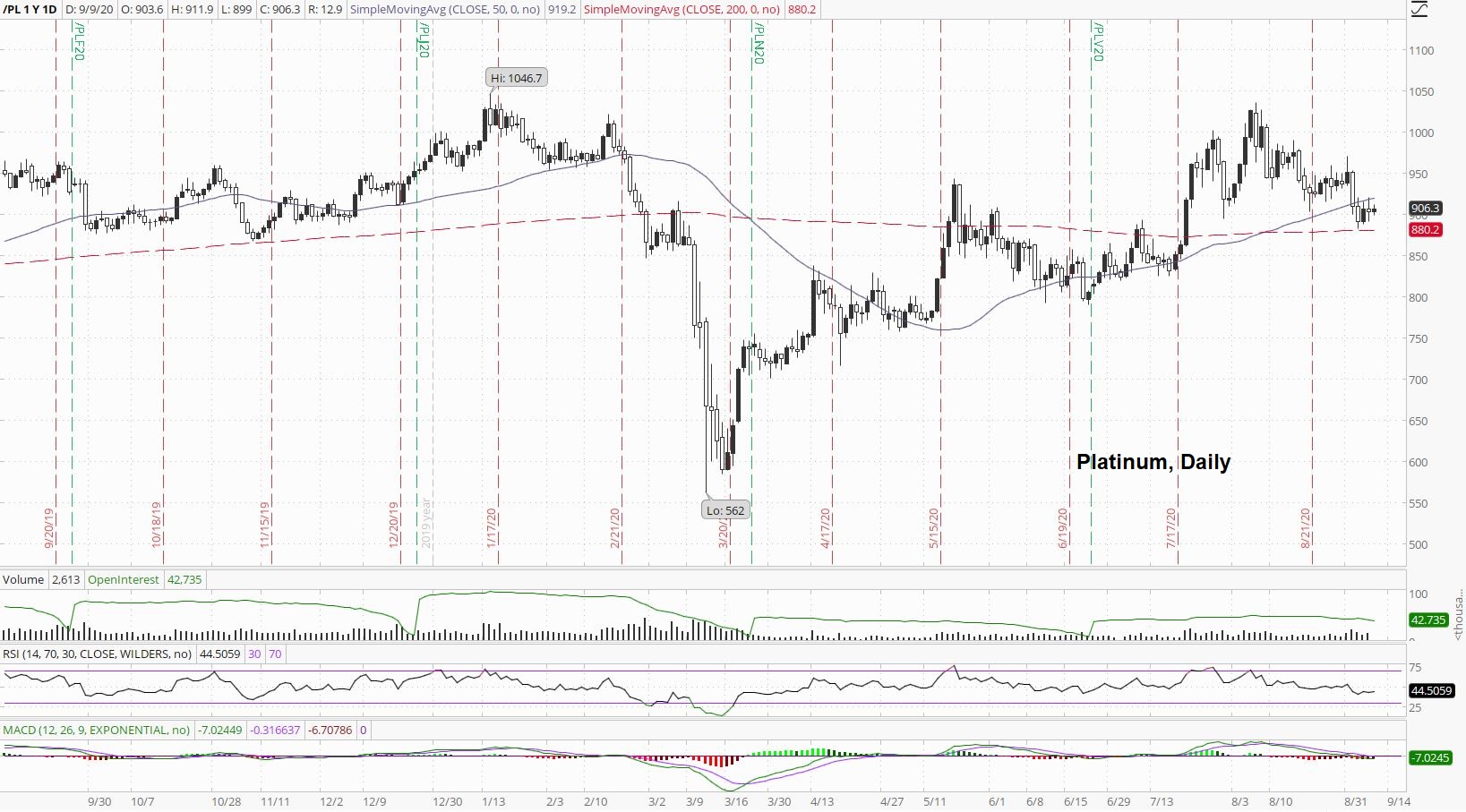 With three lower-highs and two lower-lows, however, the short-term trend is still bearish, although I think the trend-change will be evident over the next few weeks.

The paper Gold-to-Silver ratio has moved from the upper-60s to the mid-70s: 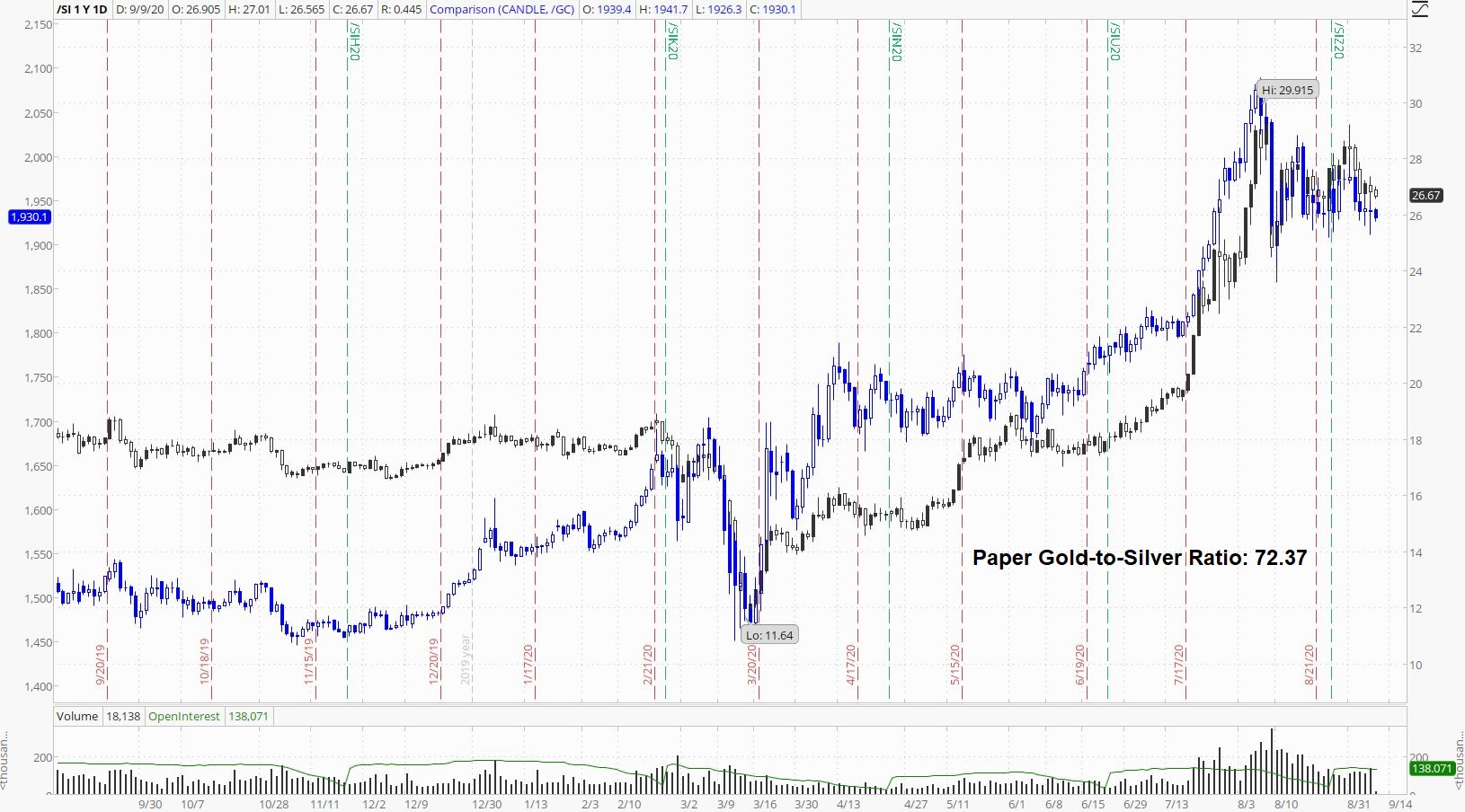 As expected, silver has outperformed gold to the downside, generally speaking, by over 7%, so we're ripe for the rally to begin in Gold & Silver at any moment. 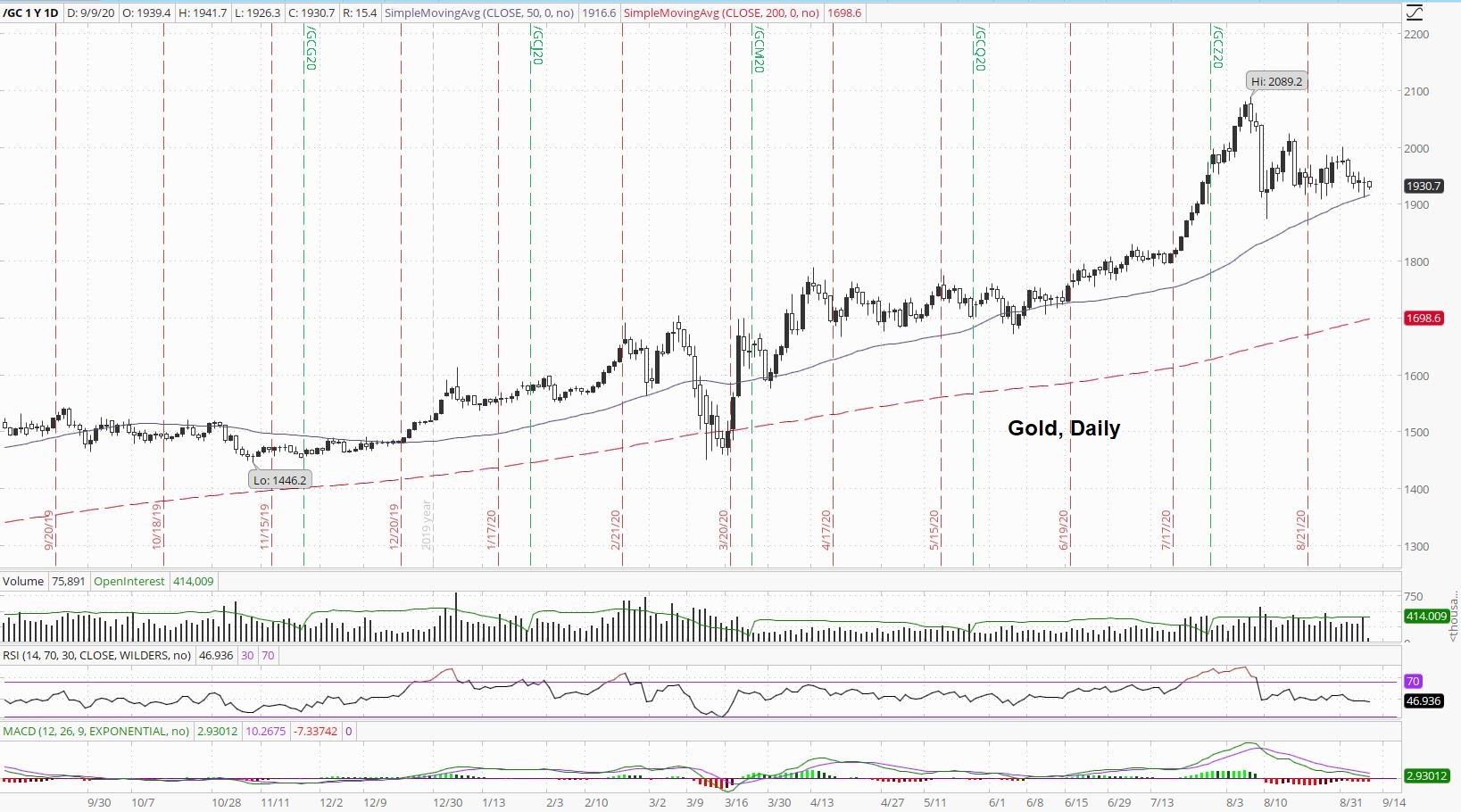 That is not so to say, however, that if the stock market keeps plummeting, that gold (or silver) will not take a dive lower.

Regardless, I'm really liking how $26 has been acting as support for silver: 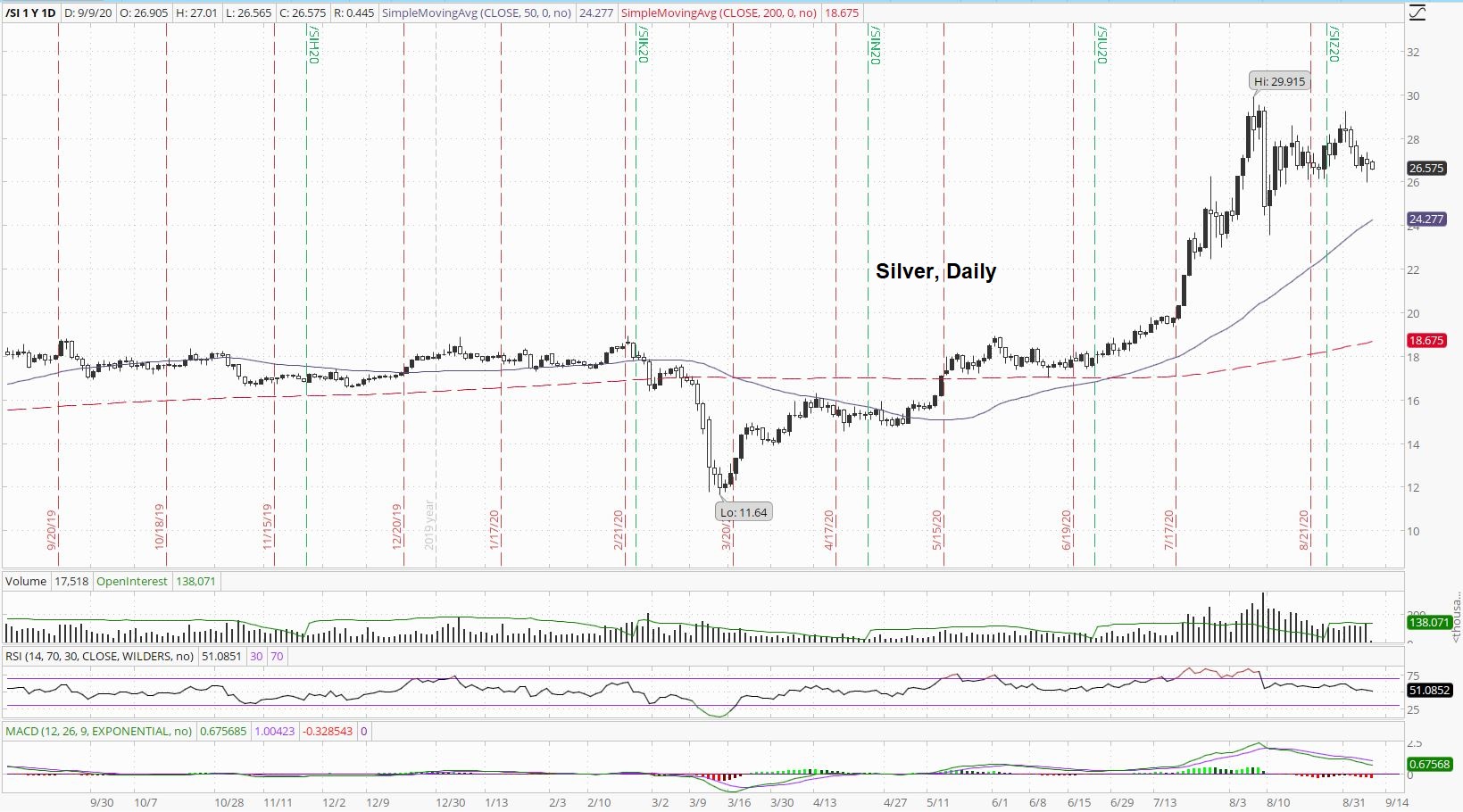 One could even argue a bull pennant chart pattern, and if one makes that case, depending on where the support line is drawn, we're looking good for a run here with a possible break-out move.