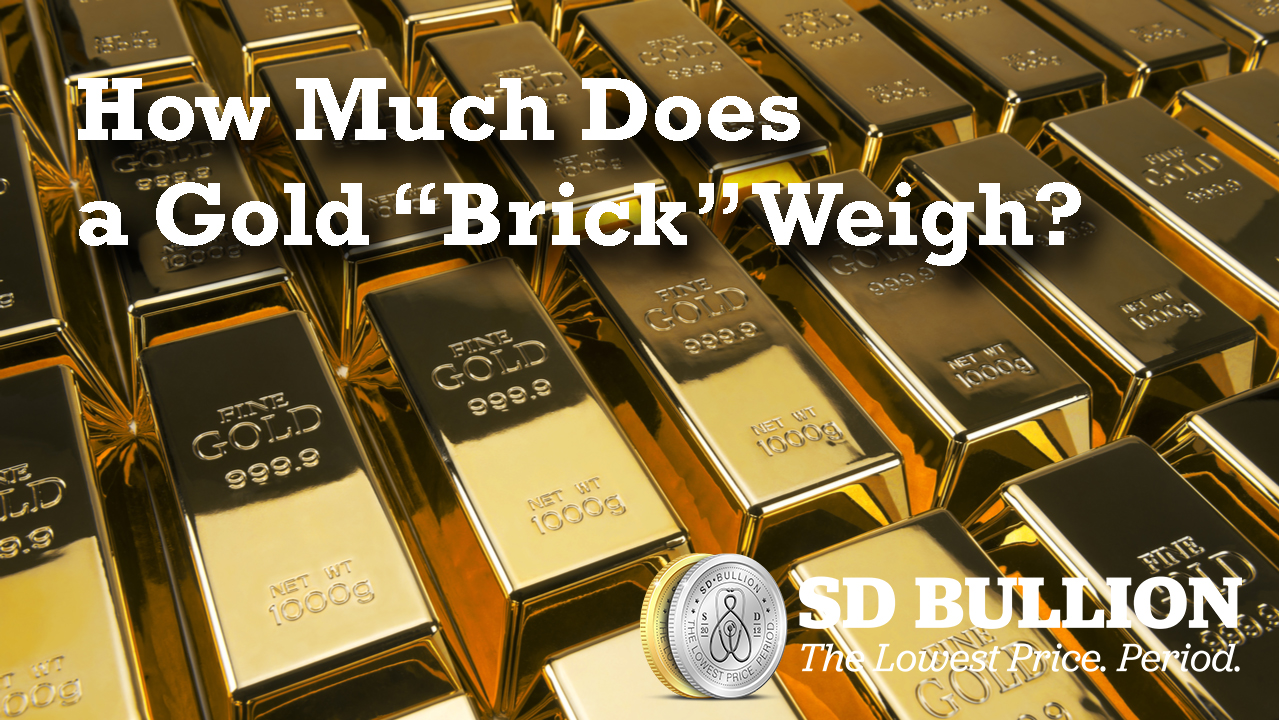 How Much Does a Gold Brick Weigh?

How many times have you been watching a movie when suddenly someone starts running around carrying some gold bars? If you're anything like me, you begin wondering how these people can carry all that weight. Aren't gold bars heavy?

And how much does a brick of gold weigh, anyway?

It turns out it depends on which kind of gold brick you're referring to. Gold bars come in various sizes, which means just about anyone can buy a brick of gold that fits within their budget.

Read on to learn the various names given to gold bars, the types, and the most common gold brick weights.

Gold bars or bricks are known by the general name of gold bullion. Bullion simply means gold, silver, or other precious metals sold in bulk. Bullion is believed by some to maintain its worth better than typical currencies, especially during periods of instability. It’s kept by governments and private citizens as a form of emergency currency or as an investment.

Bullion comes in a few typical shapes. A bar looks like a brick, with its weight (or mass) and purity stamped on it. A biscuit refers to thinner bars of bullion; these may also be known as wafers.

Finally, an ingot refers to any piece of metal, precious or otherwise, that is made by pouring the metal into a mold.

Gold bricks are often categorized by the way in which they are made.

Cast bars are made by pouring molten gold into a bar-shaped mold, then leaving it to cool and solidify.

This manufacturing process results in imperfections and uneven surfaces, so that each bar is unique. The uniqueness makes the bars easier to identify. Cast bars are also cheaper to produce.

Minted bars are made from gold blanks cut to a specified size from a solid piece of gold. These bars have smooth, even surfaces and cost more to manufacture than cast bars.

How Much Does a Brick of Gold Weigh?

Before we can answer how much a brick of gold weighs, we must discuss how a brick of gold is measured. We'll also talk about the "standard" gold bar, the most common gold brick weights, and how you can find out whether you're worth your weight in gold.

How Is Gold Measured?

Gold is often measured in a unit called troy ounces, which weighs about a tenth more than a standard ounce. A troy ounce is equivalent to 31.1034768 grams.

The standard ounce is known as the avoirdupois ounce, and you may see this term used to differentiate it from troy ounces.

What is the "Standard" Gold Bar?

The standard "Good Delivery" gold bar is the bar you most often see in TV shows and movies.

It weighs a whopping 27.4 pounds/400 oz (we were right to wonder how people are carrying them). At current prices a single bar is worth about $750,000 American.

A Good Delivery bar's gold content is allowed to vary between 350 and 430 troy ounces, and  the minimum purity is 99.5% gold. They must be stored in recognized and secure gold bullion vaults to maintain their quality status.

Good Delivery bars are held and traded internationally by central banks and bullion dealers, and only rarely sold to the general public.

While the Good Delivery gold bar is the one people most think of, there are many other kinds of bricks. The table below provides a list of the most common gold bricks available in the U.S., as well as their weight and mass. The last column lists common item that weighs about the same as each kind of brick.

Note that other countries use other weighing systems for their gold bars, with different standardized weights.

What Are You Worth in Gold?

Are you worth your weight in gold? Use this calculator to find out. Someone who weighs 180 pounds, for instance, would be worth nearly $3.5 million at current prices.

So how much does a brick of gold weigh? It depends. Gold is weighed using troy ounces, which are slightly larger than the standard ounce used in everyday life. The Good Delivery gold bar (400 oz) is the stereotypical size seen in movies and TV, but many different gold bars are available for purchase.

Will you be adding a gold brick to your collection?