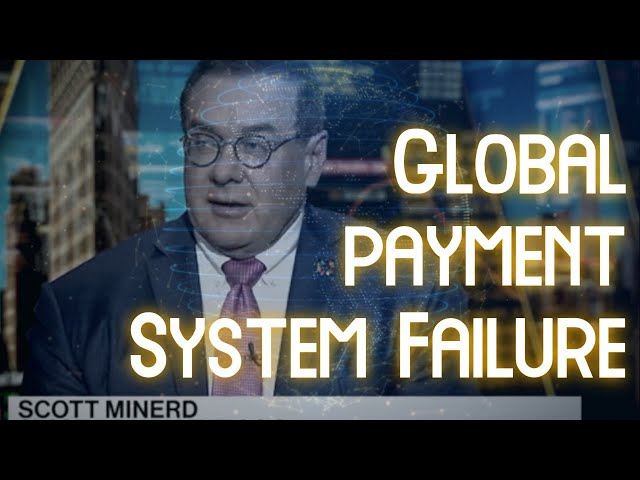 If you have been monitoring trends in the global business and financial world, you likely know this is coming.

And if you have bothered to study how old and analog our current global system of payment settlements is, this week’s concern should be on the top of your mind. For us here at SD Bullion, it certainly is.

We've highlighted Scott Minerd’s silver bullion bullishness on this SD Bullion channel in years past. You can see more on that here.

We're going to remind you just how financially connected Scott Minerd is. What he has said on record is the transitional endgame phase for the global payments system. As well, we'll listen again to his take on silver's eventual parabolic rise potential to come. Mr. Minerd also states that the 10 yr US Treasury will probably go negative before this 40 yr bond bull market ends.

Before we begin this update in earnest, a few thought-provoking questions related to this topic of payment settlement system freezing up.

How will our vulnerable Global Payment System react to large-scale coordinated hacks, attacks, and or significant Natural disasters like solar flares that can potentially blow out nearly everything digital and electronic it possibly blows through here on Earth?

More questions to ponder are below.

In the tweet embedded below is the Bank for International Settlements Money Flower illustration.

It illustrates that all currency derivatives flowered from their precious metal monetary legacies and foundations. The government partnered central banks still hold over one in five ounces of gold ever mined because they know their fiat financial folly history. It is their insurance policy if and when currency derivatives fail again.

How prepared are you if the financial system were to seize up for months in duration?

In a complete financial system freeze or failure, having physical bullion and cash should be handy in getting necessities. Always having a few months of physical cash notes hidden away to cover monthly household expenses makes common sense, given the inherently leveraged risks we're all facing. Small-denomination silver and gold bullion products can also be handy for getting immediate liquidity in a pinch.

In the race for digital control grid cartels, our shortsighted financial leaders want us helpless in transacting if and when in the future the electronic grids fail and or get hacked for long durations of time.

Why else would the Bank of International Settlement's Agustin Carsten's be saying things like ABSOLUTE CONTROL when referring to the fiat Central Bank Digital Currency or CBDC payment grid that he and a hundred plus central banks are working on right now?!

And right on cue, The Daily Mail reported today about how the new USA’s Comptroller of the Currency thinks it is time the fiat Fed ends banking as we once knew it.

Have we noticed the trend yet?

Less control and privacy over our savings is what they want. And other than bullion, they're probably going to get it this decade into the next.

Silver and gold had volatile weeks, with the general last half-year trend still down.

The gold-silver ratio tightened to close this week, but it still looks technically like it wants to spike towards 85 before we make the next significant move downwards.

The Wall Street Silver crew continues updating on Twitter, how massive the NY Fed's Repo Loans are growing, hitting a daily record of over $1.6 trillion in one day this week.

Congrats to them for reaching 150,000 silverbacks in their Reddit community.

As promised to close this week's SD Bullion market video update, we revisit what this former NY Federal Reserve Investment Advisor Committee Member has told us about silver and where the world is headed by 2020.

We start in early 2020, and then we go back to 2011, the last time the US debt ceiling debacle got the US debt downgraded by Moody's and other rating agencies.

That is all for this week’s SD Bullion market update.