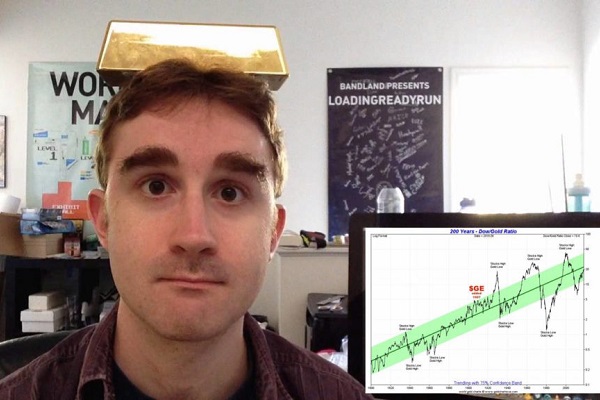 Yesterday news came out that the Dow Jones Industrial Average (DJIA) is dropping General Electric (GE) from its index of only 30 arbitrary equity components it tracks.

General Electric was once the world's most valuable company and since 1907 it had been contiguously a part of the often quoted, yet small stock market gauge often simply referred to as the Dow.

Walgreens will replace General Electric (GE) as a new input for the DJIA.

Today's internet search volumes reflect that many stock market investors do not know that the DJIA is perhaps an inferior and narrow gauge for how publicly traded stocks are valued and trading.

See this point illustrated below. 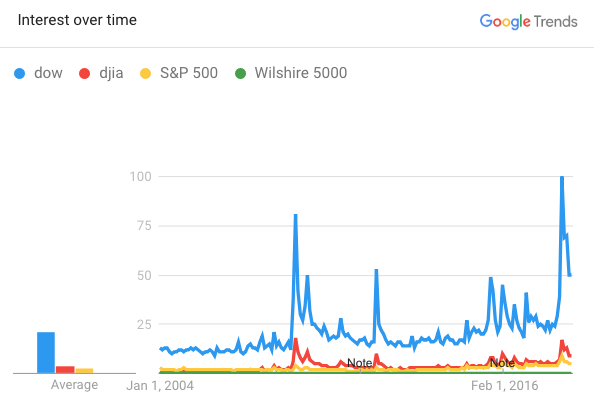 Larger more broad equity indexes like the S&P 500 and especially the Wilshire 5000 have many more publicly traded company components and are therefore better general measurements to US stock market valuations. Yet both respective broader indexes garner much lower internet search volumes month after month.

Turning our attention back to yesterday's news that the DJIA is dropping GE from it component index. Note that every aforementioned index arbitrarily chooses which stocks it will and will not track, thus using any of them as longterm gauges on stock market valuations is skewed (bankrupted companies are dropped along the way yet conversely potential company dividend reinvestments are not reflect either).

For example, every single original company component that began valuing the DJIA has either gone bankrupt, been taken over, and or has been dropped over its more than 120 year history.

Finally moving our attention to a 200 year history of the largest transnational and US traded equity valuations vs 1 oz of Gold we see that technically we are due to roll over in the coming years as the largest swath of shareholders (the Baby Boom generation) begins cashing in their investment portfolios for retirement funding. 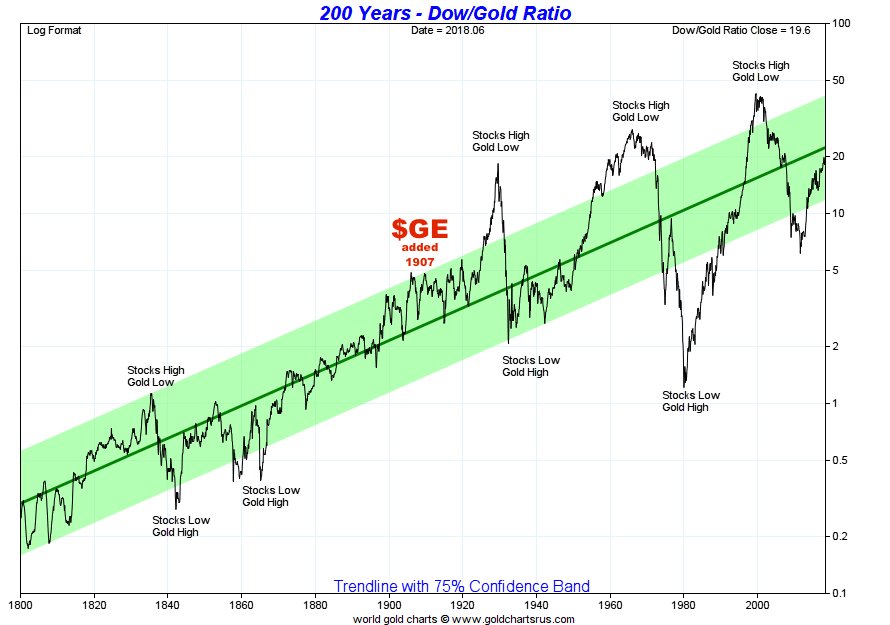 It was only as recent as August of 2011, that the Dow Gold Ratio dropped below the 6 level.

This meant that 6 oz of gold could have bought more than one share of the DJIA then.

Just based on financial index search volumes, it is rather obvious most stock investors do not understand the inputs of the indexes which they are quoted on a day to day basis. Much less do they likely fathom the algorithmic trading games now praying upon retail investor equity trades.

Many bullion aficionados are expecting history to repeat and potentially reach or possibly pass the 1980 peak of a 1:1 Dow Gold Ratio.

If you want to possibly buy 10x more broad US equity shares some time in the 2020s or possibly in the decade to follow, perhaps now is the time to take profits in equity investments and roll them over into bullion before the baby boomers do so in a conceivably massive and disorderly fashion.

Of course that all said, this current increasing debt / leverage / and QE fueled equity rally to recent all time nominal highs is indeed different in many important ways.

In just a few minutes you can hear from a famed former hedge fund manager, as to why we may be about to cross the Rubicon with sharply lowering Dow vs Gold valuations ahead.