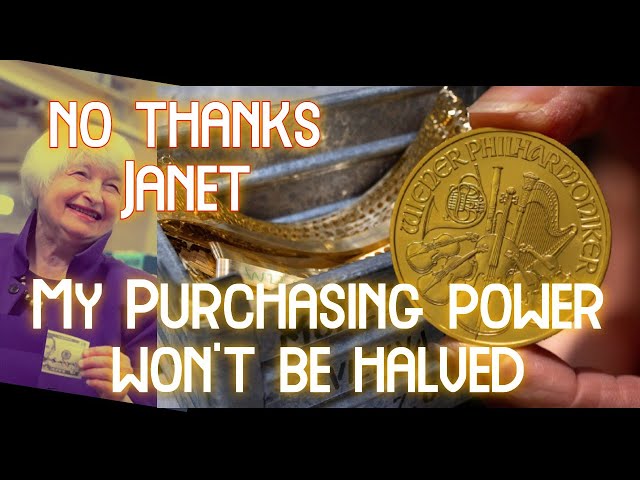 Demand for Gold Has Never Been This High Says Austrian Mint

The US government's underreported price inflation data, provided by its own Bureau of Labor and Statistics, came in lower than expectations this week at +7.1% year on year.

We're happy with this rate of price inflation.

For one second, suspend your disbelief, and consider that this admitted price inflation rate would halve the fiat US dollar's purchasing power in merely ten years.

What a difference a year makes after the financial market has sustained high price inflation conditioning.

This week the fiat Fed tapered the size of their rate hikes moving up only 50 basis points instead of the 75 basis point hikes we have seen.

Even with a weak reputational legacy, former fiat Fed Chairman Arthur Burns moved up interest rate hikes faster, but to be fair, Jerome Powell is doing so in a world where a record debt piles amok.

The real rate of return or the admitted price inflation number minus the rate of interest on IOUs to the US government are still at low negative levels not seen since the 1970s.

Consider how badly the US government lies about price inflation, and the truth is likely far worse with real negative interest rates closer to -10% than -3%.

As nominal interest rates climb in the USA, concern that some things might break remains well warranted.

One of my favorite economists, William White, this week had some thoughts worth considering as we move towards 2023. We will highlight a few of his comments and backlink the full video in this week’s show notes on youtube.

Silver and gold spot price markets moved up and then finished slightly down over the week's derivative trading.

The gold-silver ratio closed at 77 this week.

In the physical bullion industry, we are seeing more bullion product availability and the lowering of premiums from their recent record-high levels.

The Austrian Mint's director said, "right now, we could sell three times as many as we are able to produce."

Egypt, a nation with over 100 million people, has people rushing for fiat US dollars & gold to protect their savings.

There is now a 2-tier market for fiat $USD exchange rates which is now widening, a typical sign of runaway price inflation underway and insiders grifting on the exchange rate gap.

Common in high-inflation nations like Venezuela, Lebanon, or Argentina.

Both silver and gold in Egypt are doing their job protecting their owner’s purchasing power.

To close this week, I wanted to give a quick reminder to those out there who might still too often only think in fiat currency note terms when judging value.

Knowing the nominal price of asset classes differs from judging its relative real value over the long term.

Here we have an info video graphic flying around Twitter telling everyone that UK house prices are perhaps the most unaffordable they have ever been in average UK salary.

In silver terms, throughout this full fiat currency, the largest rip-off era for UK housing priced by silver was in the early 2000s.

When I look at this UK house divided by silver chart, I see a lower trend level which will eventually collapse beyond the old 2011 low level.

So no, UK housing is not that expensive if considered in silver or gold bullion on a relative basis. I contend property will get much cheaper for bullion owners worldwide as this decade progresses.