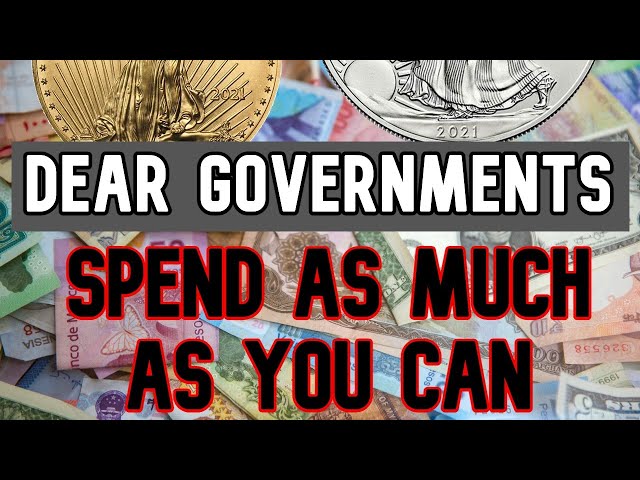 Dear Governments, Spend as Much as You Can

This week we heard further details about more trillions in upcoming spending and even changing monetary issuance laws (for CBDCs) worldwide.

The International Monetary Fund (IMF), what critics might call a supranational leveraged buyout bank, was out this week making calls for governments worldwide to spend as much as they can.

They also noted that monetary issuance laws would need to be changed in 104 nations to directly issue fiat Central Bank Digital Currency or CBDC for fuller global fruition.

This chart extending out to the year 2050 is likely underestimating what height the US federal debt level will peak out at in the coming decades.

Federal Reserve Chairman Jerome Powell had the following statement this week worth highlighting.

There is nothing in any definition about how fiscal dominance, which considers our still having the dominant fiat currency of the world, utilizes yield curve control, with suppressed real interest rate yield, rigging inflation and unemployment data, while still dominating the world in most price discovery powers.

Yet on the cusp of losing economic output dominance to over 2.5 billion Chinese and Indian residents, they tend to stack physical gold and silver as they get wealthier increasingly.

Another week of up then down spot price action for silver and gold. As we head into this Monday's thinly traded Martin Luther King holiday, note that the spot gold price sits just below its 200-day moving average.

During gold bull markets outside of the global financial crisis, that is typically an excellent time to add to bullish and betting long positions.

Yet akin to how 2011 began, if silver price history is setting up to rhyme, today’s silver price currently could again double in only 90 days.

While many soft commodities and energy prices have been ramping as we begin the year, for example, see this rising one-year price chart for Corn & Soybean Meal, both often used to feed cattle and human beings.

Last July 2020, on this channel, we discussed how a coming short squeeze on gold might result in not merely a silver but also perhaps even a gold bullion shortage worldwide.

Last year, Comex gold deliveries were record-setting, so much so that in July of 2020, COMEX had to change the bullion bar hallmarks that are allowed for Good Delivery futures contract settlement.

Today, the supposed enemies of our state. Nations such as China, Russia, and even Turkey, are now allowed to inject their gold and silver bar hallmarks as good delivery bars in our still price discovery dominate gold and silver COMEX derivative markets.

Let us turn to Indian rupee prices for gold and silver to begin this year. If you want to see a real-world example of how "Poor Man's Gold" operates when the gold price gets away from the average man in the street, look no further than physical silver and gold buying India.

We are only a couple of good silver trading days away from a new record rupee price for silver and a likely price breakout, which should lead to increased demand for physical silver imports into India.

During the 2010s, there were many years in which India imported over 200 million oz of physical silver in a calendar year. Indian farmers don't often fall for ETFs or leveraged derivatives; instead, they often choose to own their silver and gold over there directly.

Report this past week by the Silver Institute forecasts that automobiles (especially Electronic Vehicles) will increase Silver industrial demand in the coming decade.

They forecast that nearly 100 million oz of silver demand per year by 2025 for car manufacturing, a near doubling from this demand segment alone.

Seen here are, but a fraction of silver's input uses in new automobile manufacturing.

That top range of 1.6 oz of silver per EV fits well, making the attractiveness of thrifting for a bit more profit margin while sacrificing reliability and brand not worth it.

Silver could be triple digits & still worth use by the
best most reliable brands e.g. Toyota pic.twitter.com/l5vyuytUJG

Remember back to the start of this week's update, where governments are being encouraged to spend on items like infrastructure, thus increasing solar demand will also be coming from both China, the USA, and likely the EU as the decade unfolds.

In a market of less than 1 billion new troy ounces every year, there are many old and new players coming in, likely quickly escalating the asking price of physical silver bullion worldwide.

As more trillions by fiat get spent and set forth into the global economy, silver and gold values remain poised to ramp in the years about to unfold.

And as always, take great care of yourselves and those you love.