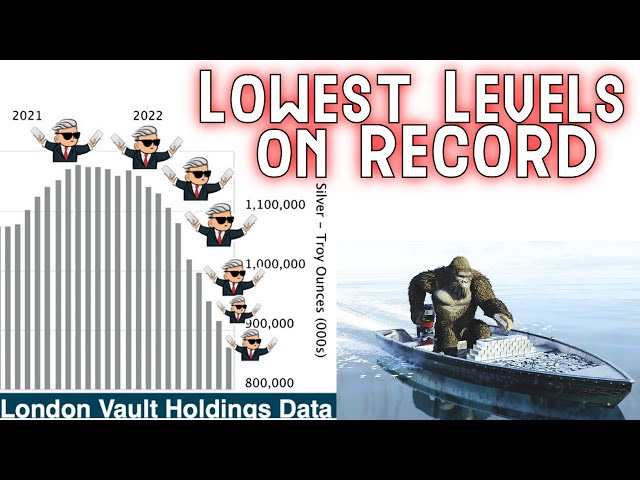 Last week began with a big rally in the daily silver prices, up nearly +9% this past Monday alone.

You have to look back to late 2008 silver price action, as the first round of quantitative easing began by the fiat Federal Reserve to see a one-day positive percentage move of similar size.

In our update this week, we will update a few key silver market inventory points after we show a clip of how CNBC in India covered this positive silver price action late last week.

Gold on an Indian price chart is becoming "unaffordium" if you will, and thus we see supposed “poor man's gold” silver getting a massive ongoing import bid in India. The populous eastern nation is likely to break its 2015 silver bullion import record number by the end of this year, 2022.

London silver warehouse pile continues to shrink to the lowest level on record. The data was updated today through the end of last month, September 2022.

Since the start of the #SilverSqueeze movement in Q1 2021, over -317,000,000 oz of reported silver bullion has left the combined London and COMEX silver warehouses. Silver industry data illustrates western investors and India have gotten their fair share of that vanishing silver pile.

The vast majority of reported silver in City of London bank depositories is already spoken for unsecured ETF silver. The USA’s COMEX exchange also counts large numbers of silver ETF metals within its eligible silver depository figures. The amount of silver bullion that could actually be pulled from either system is much tinier than the world is led to believe.

The amount of silver float in London (silver not owned by ETFs) when this chart gets updated might be less than 10,000 metric tonnes. A sum that is not much larger than what India alone will import in this year 2022.

The spot silver price closed last week just over $20 oz, and the daily gold prices finished just below $1,700 oz for the week's trading.

The gold-silver ratio fell slightly to close at 84 for the week dipping as low as 81 early in the week.

Despite the underlying fundamental bullishness for silver, market commentators and consultancy Metals Focus released a short-medium-term silver bearish note this week. Stating their belief that silver and gold spot prices in fiat US dollar terms still face headwinds to close this year as the fiat Federal Reserve looks to raise their federal funds rate again this month. Driving what they expect will be further relative strength in the fiat US dollar to come.

In terms perhaps one of the biggest risks underlying the global financial system at the moment has become the potential failure of major commercial bank names in Europe.

The Bank for International Settlements Financial Stability Board defines all four banks as Global Systemically Important Bank names. If any of these names failed, the amount of contingent derivative bet contagion could freeze the entire global financial system.

In late 2014, the G20, the world's largest twenty economies, signed supranational laws stating that the next banking failure crisis will not be met with bank bailouts but bank bail-ins (unsecured bank depositors and unsecured creditors being at major risk of forced losses in that case).

We made the following video on this real ongoing threat of bank bail-ins in late 2019, these bank bankruptcy laws are still on the books.

It is ongoing underlying fundamental facts like these that are driving more investors worldwide, from India, China, the EU, and North America, to increasingly become their own banks by owning prudent stashes of bullion outright outside of the financial system.

Ongoing bullion industry data illustrates that this trend only appears to increase as the months and years progress.