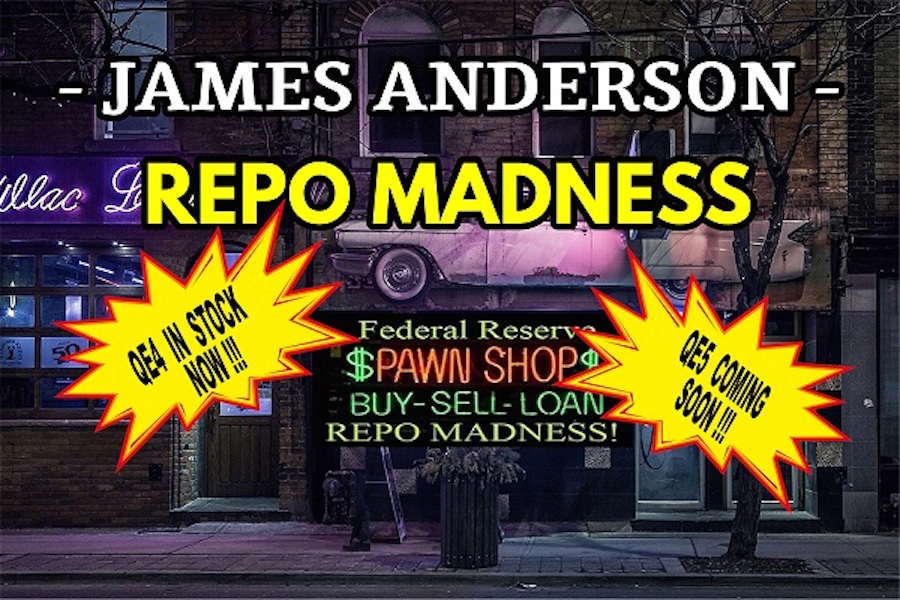 It was a mostly down week for the precious metals complex.

The spot silver price closes the week at $17.50 fiat Federal Reserve notes per troy ounce, down about 50¢ on the week.

The spot platinum price finished flat for the week, right around the $933 mark.

Here we cover a building story we have yet to discuss here on this Metals & Markets wrap.

This week, we dive into details and questions surrounding why is the Federal Reserve now injecting over $100 billion fiat Federal notes daily into the overnight lending facility?

Welcome to this week’s Metals & Markets wrap, I am your host James Anderson of SD Bullion.

This week we will have no guest on the show. Instead, we will dive into details and questions surrounding what the Federal Reserve is up to in the REPO markets.

You can find the massive amounts of short-term REPO loans the NY Federal Reserve has been giving out over the last few weeks.

On Tuesday, September 17th, 2019 the private central bank of the USA, the Federal Reserve, stepped into financial markets to keep short-term interest rates from rising — the first time the central bank has had to carry out this type of “market operation” since the global financial crisis.

US currency markets effectively experienced a bank run, as oversized demand for repurchase agreements (also known in short as REPOs) whose rates spiked overnight to an unprecedented high of over 10%.

Here are some Questions onlookers should be asking themselves.

Why do we see the Fed do Repo operations for the first time since 2008?

Why is demand for overnight cash still being oversubscribed even after the Federal Reserve almost doubled the initial market intervention amount?

If one of the critical arguments for having a central bank is to be the lender of last resort, why is the Fed having to now pump over $100 billion fiat Fed notes per day into the financial system?

The excuse that got initially given that some last-minute corporate tax payments jacked-up overnight bank lending rates are not the real driver here. Common sense knows we have not seen anything like this in over a decade. Every corporation’s accounting and finance department knows when their taxes are due.

Truth is we’re not going to find what’s happening until it is probably too late for most people.

Let’s look at some potential reasons behind how and why this might be happening.

As the US Treasury increasingly continues to issue more bonds and shorter-term notes, it has not collected enough taxes to fund (also known as deficit spending). The increase in IOUs issued with different time frames is supposed to get sold to primary dealers.

A primary dealer is a commercial bank or institution that buys government securities directly from a government, intending to resell them to others, thus acting as a market maker for US government IOUs.

So have a look at this chart, why have the US Primary Dealers hoarding treasuries?

Is it merely that we have an oversupply of US treasuries and a lack of reserves to fund dealers purchases of new treasuries?

There must be an underlying constraint, a reason yet disclosed as to why primary dealer banks are not fulfilling their role as lenders and market makers.

In terms of sheer size and volume, this on a reported, per day basis. Is this REPO intervention the most massive bailout in financial plumbing history?

When are we going to find at the real reasons this happening?

There are already trail balloon calls in mainstream financial media articles, to expand the Federal Reserve’s portfolio of securities by $315 billion over the next two quarters, as well as a standing fixed-rate repo facility, a bridge loan concept.

In other words, a QE on demand.

The Fed may skip all this, and invent some new QE program using a new name.

QT About to be Erased?

What you see here is the Federal Reserve’s balance sheet this century, leading into the 2008 financial crisis, then the TARP, and subsequent 3 Quantitative Easing programs peaking their late 2017 balance sheet just below $4.5 trillion.

The drop in the slope on the right is their QT or Quantitative Tightening program. That program is done and only dropped the balance sheet around $700 billion.

Look to the far right, and we can again see that the Federal Reserve is still expanding its balance sheet.

As we focus on the chart above, we can see almost $100 billion USD has gotten added in less than 30 days to their balance sheet.

At that pace, the QT effort will be erased by April next year, 2020.

The Fed’s REPO loan madness is supposed to come to some fixed solution by Oct 10th next month.

Regardless of whatever is causing the Fed to have to offer over $100 billion a night to smooth overnight lending rate spikes.

The Fed still has significant headwinds to deal with ahead.

The fact is the median US citizen does not have much wealth, and we live in a democracy that is politically charged and as divisive as ever.

The largest swath of our population is retiring at a clip of 10,000 workers per day. And neither they in the aggregate nor the Federal Government, not the underfunded pension funds, saved enough for the decade to come and beyond.

Whatever they decide to call QE4 and QE5, the Japanization of our supposed capitalistic financial system is here and further coming to fruition.

The issue is the effect, when you look back at QE1, QE2, and then QE3. Each subsequent intervention and financial market cash injection have consecutively dissipated, with less beneficial results.

As the Fed likely ends up more than doubling its current balance sheet or more by the year 2030.

The question will be at what cost to the currency?

To the value of financial assets attempted at being propped up?

And to the average US citizen at large?

Keep your eye on this story in the month to come.

Have a great one, all you listeners out there.