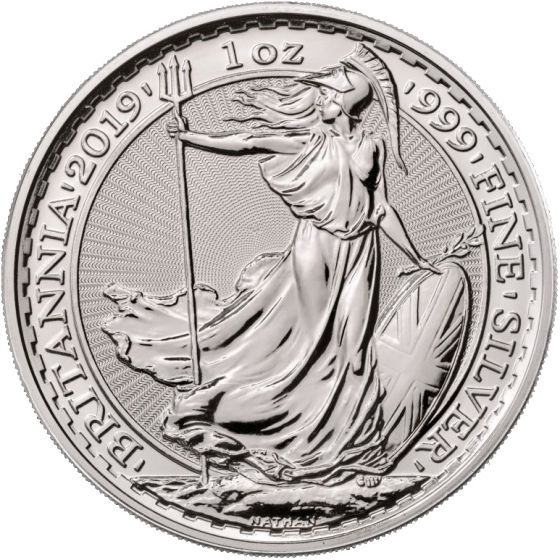 Silver Britannia Coins are among the most popular coins to originate from the United Kingdom ever since they first launched in 1997. These 2019 1 oz Silver Britannia Coins celebrate the 22nd anniversary of these coins with the familiar designs that have almost become synonymous with UK bullion products. Like every annual release, these coins are struck by the famed Royal Mint in London.

Based in the United Kingdom, the Royal Mint is one of the oldest minting institutions in the world – tracing its roots back to 886 AD. Although the Mint’s chief responsibility is striking coinage for the United Kingdom, it also produces planchets, commemorative coins, and various types of medals and precious metals bullion.

Every coin contains 1 troy ounce of 0.999 pure silver. Moreover, they carry face values of 2 GBP, indicating the full backing of the UK government and their legal tender status. Multiples of 25 coins are shipped in tubes while multiples of 500 coins are shipped in monster boxes to ensure that your purchase remains protected during shipping and storage.

The image of Britannia, the renowned Goddess and Guardian of Britain is featured on the reverse. She is seen looking toward the sea, fighting against a strong gale. A trident and a shield in her hand indicates her readiness to protect the great nation of Britain from harm and is poised ready to attack if threatened.

The obverses of the coins feature the relatively new portrait of Queen Elizabeth II, created in 2015, displaying the creativity and talent of the artist who has captured the Queen's likeness quite accurately. In fact, Jody Clark, the artist behind the portrait, is the youngest engraver ever to engrave an official coin of the United Kingdom. Interestingly, this is only the fifth change in Her Majesty’s portrait on legal tender in the UK to date.

Although the Gold Britannias were launched over a decade before their silver counterparts, investors love the diversification that these Silver Britannia coins bring to their precious metals portfolios. These 2019 1 oz Silver Britannia Coins will also help you complete your coin collections, especially if you appreciate gorgeous bullion products from the Royal Mint in London.