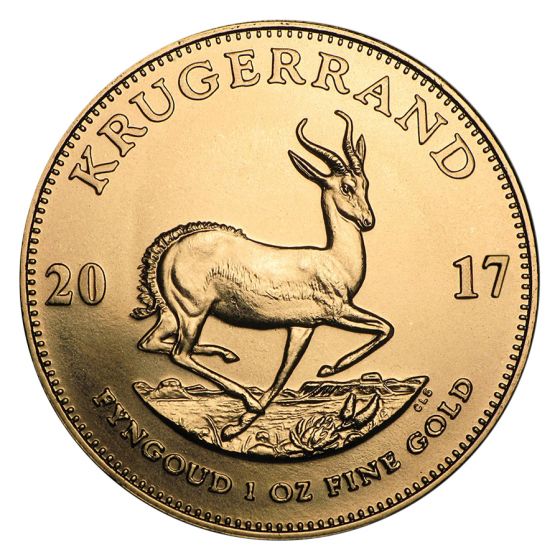 Interestingly, they were first introduced in the year 1967, and by 1980, captured 90% of the bullion market. Although these coins have no face value, their value stems from the precious gold used to mint this coin. This 2017 release celebrates the 50th anniversary of this world-renowned Gold Krugerrand Coin.

The portrait of Paul Kruger, the first President of the Republic of South Africa, graces the obverse of this coin. Also imprinted on either side of this portrait are the words ‘South Africa’ and ‘Suid-Africa’ (South Africa in Afrikaans).

The reverse of the coin features the iconic and beloved Springbok Antelope which is the national animal of the country. Moreover, the word Krugerrand is stylishly imprinted towards the top of the coin face, seen. Other things mentioned on this face are the weight of fine gold and year of issue of the coin.

Gold Krugerrands have always held a special place in the precious metals market, enjoying mass popularity for over 50 years. These 1 ounce Krugerrands are the perfect method of enhancing your investment portfolios with quality Gold, as well as keeping your Krugerrand collections complete. Additionally, the 2017 release being the 50th release of this world-renowned coin enhances its desirability for both investors and collectors.