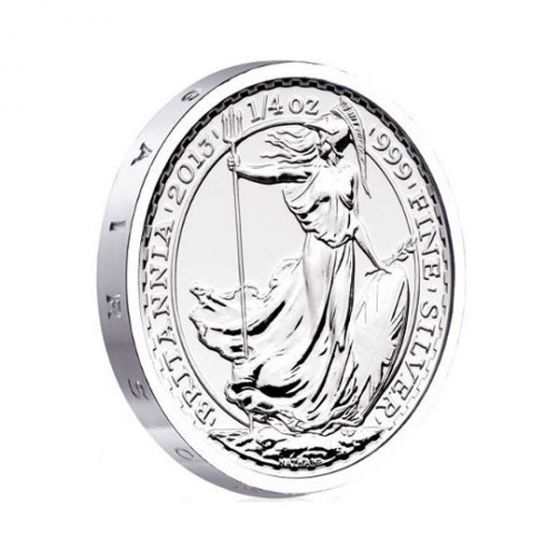 1/4 oz SD Bullion Silver Freedom Round
As low as $8.79
Description

Struck from actual Silver reclaimed from the thousand ounce bars found on the infamous S.S. Gairsoppa wreck, the ¼ ounce 2013 Gairsoppa Britannia coins are an awe-inspiring Silver coin to behold.

The massive Silver ingots were refined by the Royal Mint in Great Britain and were morphed into numerous pure 0.999 Silver, ¼ troy ounce silver coins.

Interestingly, the S.S. Gairsoppa was a British steam merchant ship which made her maiden run in the year 1919. This massive ship was called into military service during the second world war and was sunk by a German U-Boat that fired a torpedo into her hull while she was on the way to Galway, Ireland to replenish supplies.

In 2011, the wreck of the Gairsoppa was discovered and was found to be carrying an astounding weight of Silver Bullion cargo worth approximately 150 million Euros. This precious metal cargo was recovered from the wreck, resting at a depth of 4700 meters, by Odyssey Marine Exploration based in Tampa, Florida. Reportedly, the 48 tons of Silver recovered made this the deepest, largest precious metal recovery in history.

Each of these Silver coins contains ¼ troy ounce of pure 0.999 Silver and is in Brilliant Uncirculated (BU) condition.

On the reverse of these coins, the well-known image of Britannia is imprinted – seen fighting against a strong gale with her garments billowing behind her. She is a mythical Goddess who is said to be the protector of the realm of Britain. Encircling her image is the purity and weight of the Silver that was used in striking this coin, followed by the name ‘Britannia’ and the year of issue - 2013.

Its reverse features the portrayal of Queen Elizabeth II as these coins are considered official currency in the United Kingdom with a face value of 50 pence each.

Investors who wish to acquire a part of prized early 20th century Silver are sure to covet this impressive coin; collectors on the other hand who want to possess a piece of important British and World War history should not miss the opportunity to add this coin to their collection.