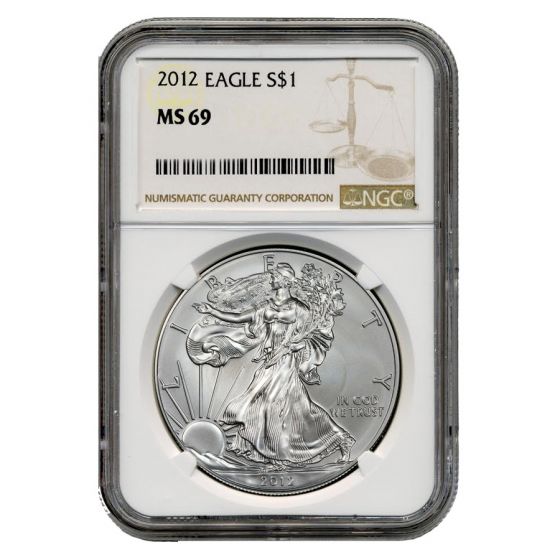 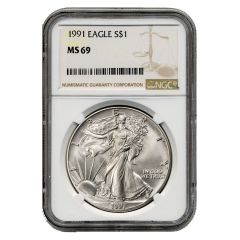 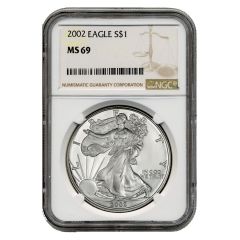 These 2012 American Silver Eagles are struck by the United States Mint, and bear grades from the Numismatic Guaranty Corporation (NGC). Their MS-69 grades indicate coin specimens that are perfect and unblemished to the naked eye.

NGC has a two-decade history of grading, authenticating, and certifying coins. In fact, ever since it was established in 1987, NGC has accurately graded over 35 million coins. Founded in Parsippany, New Jersey, NGC was created in order to inform buyers of the quality of a precious metals product before they spent their hard-earned money.

Encased in a plastic slab with a brown label by NGC, these 2012 US Mint American Silver Eagle coins are assigned near-perfect MS-69 grades. Each of them contains 1 troy ounce of 99.9% pure silver and bears a $1 face value, guaranteed by the United States Government.

The reverses of these coins feature the John Mercanti Heraldic Eagle design, created in 1986. He engraved this image when he was the Chief Engraver of the United States Mint at the time. Ever since, it has remained an integral part of the American Silver Eagle series of coins.

Bearing near-perfect MS-69 grades, these 2012 American Silver Eagles make a great addition to American coin collections that are missing perfect specimens from this year. The lower premiums on the near-perfect variety make them a valuable asset as well, allowing collectors to obtain pristine specimens of these desirable coins, without bearing as hefty a premium as the perfect variety.