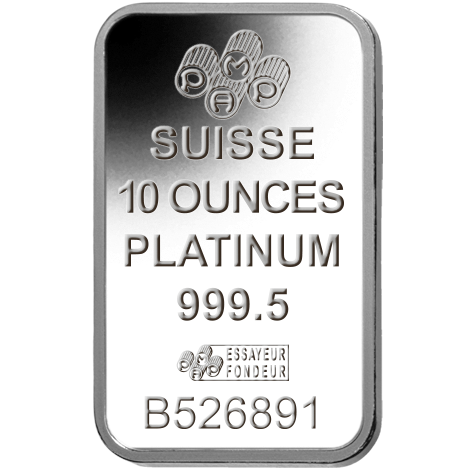 Platinum vs US dollars & Ounces of Platinum to buy $100 USD 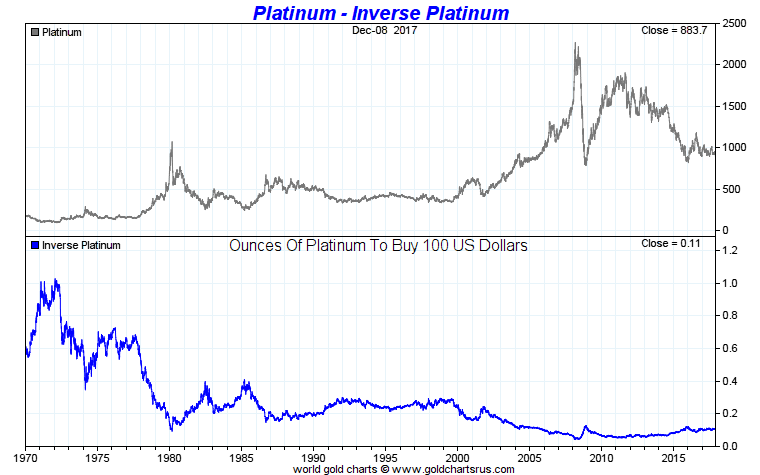 Platinum price records were first reached at the peak of the last secular precious metal bull market from 1970 - 1980 coinciding with additional respective then occuring price records for gold, silver, and palladium all within the first half of 1980.

Platinum is currently priced below both palladium and gold, the only other time this occurred was in the early 2000s AD.

Due to vast advances in human ingenuity and technology some price inflations for goods and services have decreased over time (e.g. computers, various technologies).

Yet overall economic empirical data proves that in purchasing power and valuation terms, platinum bullion has substantially outperformed every fiat currency issued over the near fifty year, 1970 to 2018 timeframe.

In the following video, learn some elemental insights about platinum.

Check out our blog post on Platinum vs Palladium Comparison

Owning physical palladium bullion as an investment and store of wealth is a relatively new phenomenon when compared to the history of silver or gold bullion usage.

Considering all time historical and even annual mine production, platinum bullion is much rarer than either investment grade gold or silver bullion items.

In fact over the past 50 years, palladium has often sold at prices higher than even gold.

Geologists estimate platinum’s earth crust concentration at 0.005 parts per million (ppm). Silver is about 15 times more abundant, found at 0.075 ppm whilst gold is found at 0.004 ppm in the ground.

For an easier understanding, if we simply convert platinum’s parts per million rarity into time, we would find 1 minute of platinum in just over 380 years of time. For 1 minute gold find analogy would last over 450 years and for 1 minute of silver it would take over 25 year’s time.

Even though gold is slightly more rare in the Earth’s crust than platinum, human beings have been mining gold for many more thousands of years than platinum.

In fact platinum was only scientifically discovered a few centuries ago as we could not get fires hot enough to melt, seperate, and isolate pure platinum prior to then. Today’s above ground supplies of gold bullion dwarf today’s refined and available physical platinum bullion supplies.

Platinum is so rare in the physical world that all the platinum ever mined in human history could fit inside of the average US citizen’s garage. Picture a pure platinum bullion cube with 8 meter sides.

Platinum Above Ground Supply vs Gold vs Silver Supplies 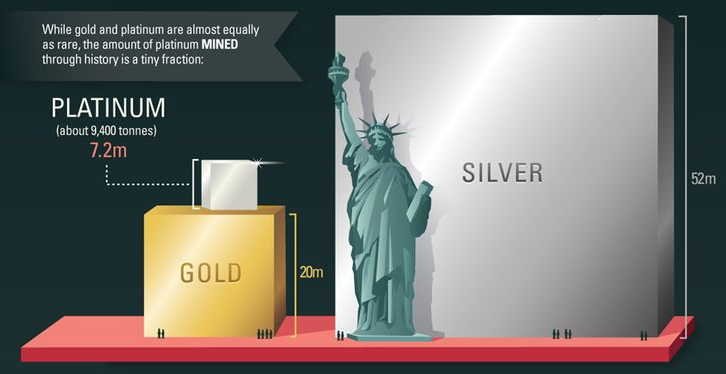 The melt point for platinum is very high at 1773°C or 3224°F when compared to other metals and a major reason why platinum was only recently discovered by alchemists. Humans have only recently been able to produce fire conditions hot enough to melt, refine, and identify platinum properly.

In fact platinum’s high melt point caused Spanish new world silver and gold seeking explorers to regard it as well as high melt point palladium as mere nuisances in their quest. Platinum was so looked down upon that it was often used in gold coin counterfeits from the 18th and 19th Century AD.

Platinum has extraordinary resistance to corrosion and tarnish and it is the least reactive metal. Platinum is also perhaps as highly ductile as gold, making those two precious metals most able to be stretched into a thin wire without breaking. Platinum can be drawn and reduced down to a wire with as thin as a 0.0006 mm diameter.

To put this into perspective, If a platinum wire was drawn down from a platinum rod 10 cm long with a 1 cm diameter, a 0.0006 mm diameter platinum wire could be stretched 2,777 km or 1,725 miles. A platinum wire long enough to extend from New York City past Denver, CO.