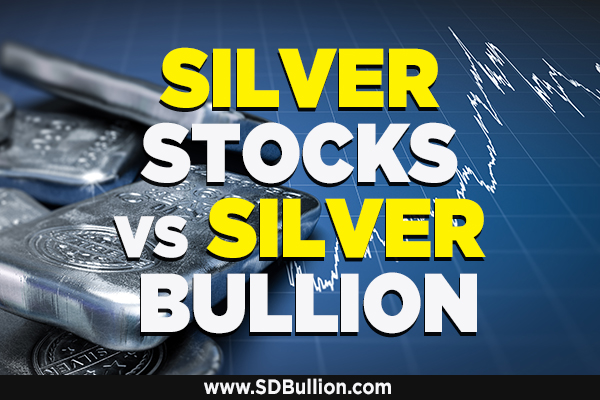 We will begin this piece with a broad generalization.

You buy and own silver bullion as an inexpensive precious store of value for the long term.

Perhaps if you are a sophisticated trader, you might speculate in the short to medium term using derivatives (e.g. ETFs, futures contracts, etc.) if you don’t mind stomaching the risks and carry costs associated (e.g. paying SLV ½% a year in annual fees).

Investors often also buy and speculate in silver mining stocks for short, medium, and at times with the hope of long term profits as well. The thinking being that silver stocks offer leverage to a rising spot price for silver. If the silver price is going to one day pass $50 oz USD, imagine what that will mean for silver mining shares?

Trouble is, one asset class tends to do better than the other at various times. One requires markets to function efficiently, the other does not require any financial markets to work to maintain it value among the world.

Here we will examine some past performances of silver bullion vs silver stocks as well as cover key differences between the two. We have also done this analysis on gold bullion vs gold mining stocks which offers similar conclusions with different data.

In the grand scope of total global financial assets, dwarfed are both the combined values of estimated above ground physical silver supplies and all silver mining shares publicly traded.

If compared to total global real estate, private and public lands, private enterprises, non precious metal currencies, total listed stocks globally, and aggregate bond markets; silver and the mining companies which produce it are dwarfed. If you will, mere silver thimbles in haystacks of other investment classes.

And there is good reason for this.

We humans have used up that vast majority of all the silver we have ever mined.

The most low priced precious metal which results from silver producing star supernova, is still cheap when compared to other precious metals.

Silver is majority mined (about 70%) as a byproduct of zinc and other industrial and precious metal metal mining (e.g. copper, gold).

Few are the publicly traded silver mining companies who only mine for silver ore which often spreads in thin veins through the Earth’s crust making profitable silver only mining one of the most difficult businesses to be successful at.

Have a look at how difficult the silver mining process documented by some of the men who do it.

This is an ever enduring debate on which to choose, gun to your head, one or the other.

Here we will attempt to point out the key differences between these two relatively small distinct asset classes, and take a long term view of their relative performances versus one another.

Barring the outlawing of either asset class (e.g. 1934 Silver nationalization in the USA i.e. government silver mine nationalizations), this discussion pitting one vs the other will likely rage onwards and will certainly not be settled here.

Yet there are some interesting past trends during this full fiat currency era which could possibly help investors know past performances of one versus the other: before, during, and after the top in precious metal prices past.

If you choose to buy silver bullion, be careful as differentiating between honest bullion dealers and high profit margin versions is key when buying bullion intelligently with success.

Our Silver Bullion Bias is Inherent to Our Business Model

We the authors of this article, we are obviously biased to silver bullion over most silver mining stocks, as we operate and maintain a high volume bullion dealership ourselves.

We began our bullion dealership business in 2012, to offer the general investing public popular silver bullion products at often the lowest prices for real reasons and motives. We believe in owning physical bullion first as the foundation in any prudent precious metal allocation, especially today.

We fully understand the argument that silver mining stocks can ‘give you leverage’.

But of course ‘the rub’ is in such presumptions, picking the right ones and the leverage actually playing out as advertised.

One must be able to first pick both the right silver miners and also be invested in quality undervalued silver miners ahead of the correct times to outperform silver bullion prices and values with chose silver mining stock positions.

Often ones choice of proven mining management is every bit as important if not more, than the resources sitting in the ground they have rights to.

Perhaps a mix of both bullion vs mining shares is best for silver bulls.

A core position of silver bullion for the long term, with a smaller speculative position in higher to lower sized silver mining stocks one could afford to lose if proven wrong. Such a limit the risk, increase the potential of reward, silver investment position could possibly give the best all around risk reward exposure overall.

Of course there are various camps that also simply choose one over the other.

In whatever one chooses, knowing key differences between silver bullion or silver stocks is important. Here we will list a critical few.