No surprise as we learned this week that our world's collective debt pile has mushroomed in 2020 to a new record high number.

The world collectively between household debts, corporate debts, and government debts are together on track to total having $277 trillion in present value fiat Federal Reserve notes of debt.

According to Reuters, the USA's share of this debt pile is about $80 trillion.

To put these figures into context.

The world's annual GDP or Gross Domestic Product is about $80 trillion per year in revenues, not profits, yet it outright owes over 3Xs that amount.

Our nation's GDP is about $20 trillion per year in revenue, again only of which a tiny amount is a profit (to pay off debt already possibly accrued) after deducting expenses.

None of this seemingly endless and growing $277 trillion debt pile considers the not mentioned unfunded liability promise piles we have made along the way. Yet what is coming are many trillions more in promises we have not accounted for accurately and only fractionally saved for ahead of time these promises come due (Social Security, Medicare, Pensions, etc.).

Nor regarded either is the massive stimulus and debt binge upcoming in 2021 and the years beyond. The International Institute of Finance (IIF) published a chart where global debt reaches $360 trillion by 2030.

Safe to assume a large portion of these record-sized debts will default.

How ugly that will get, another discussion for another time.

But with our sovereign currency creating central bank activists, many of these ballooning debts eventually will be paid off in nominal terms.

Of course, these future debt payments will be in exorbitantly lesser valued fiat currency units.

And there is no sign that this trend is going to change anytime soon.

We're not the only ones worried about this, though.

Courtesy of CNBC, the largest billionaire landowner in the United States today, explained our most feasible way out ahead.

The Russell 3000 Index is a capitalization-weighted stock market index, so the largest caps like Apple have much more considerable sway over the index than the tinnier-sized corporations. This stock index seeks to be a benchmark of the entire U.S stock market.

It measures the performance of the 3,000 largest publicly held companies incorporated in America as measured by total market capitalization and represents approximately 98% of the American public equity market.

The problem currently is that about 1/6th or 500 or more of these American corporate businesses can't even pay the interest on their debts even with near 5,000 yr low-interest-rate regimes running. 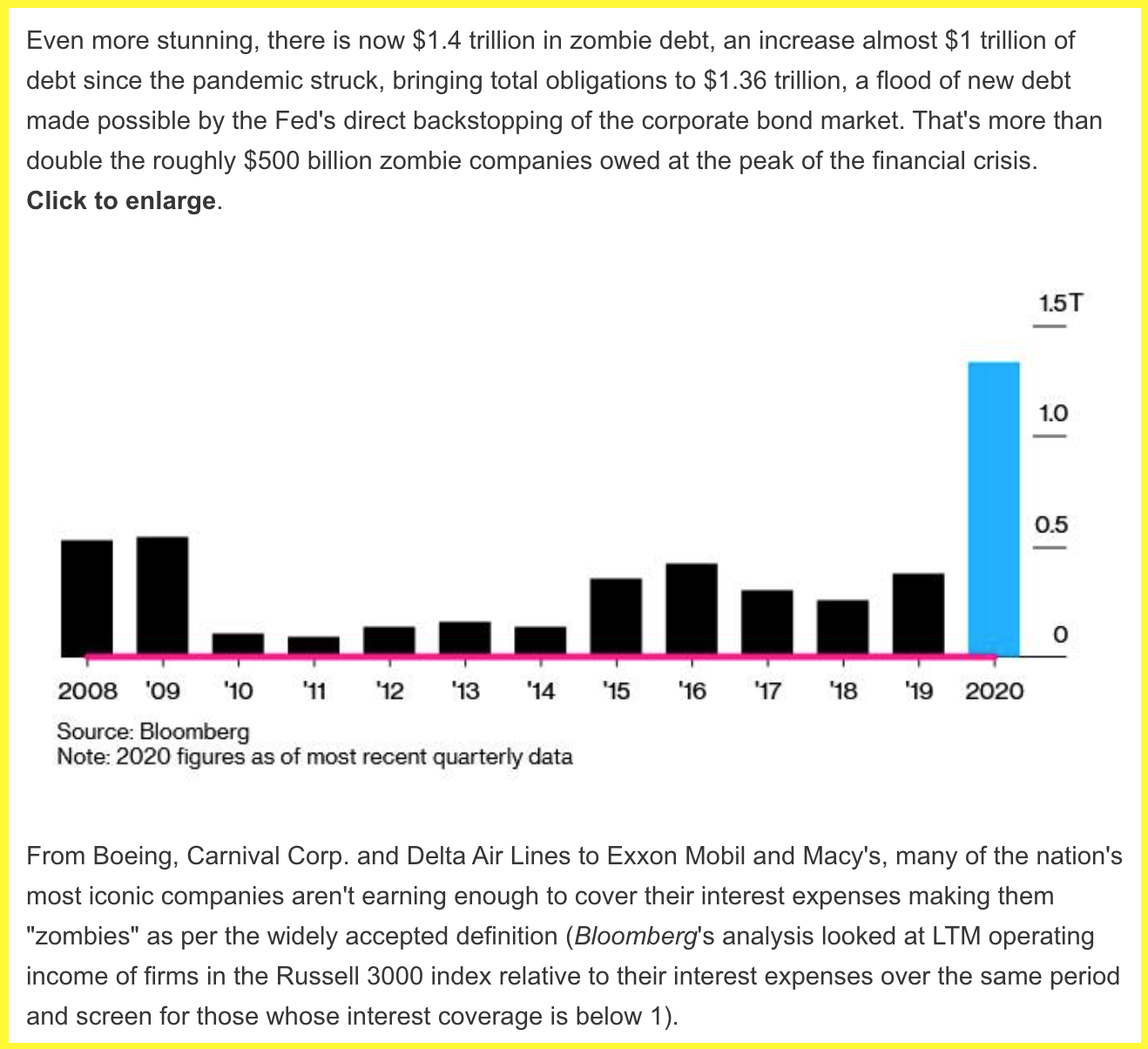 Major corporations like Boeing, Carnival, Delta, Exxon, and Macy’s are in this group of 500 zombies firms, and since March 2020, have been further taking on billions in new debts just to get by.

How much longer are these potentially failing corporates going to be able to hold on?

Consumer spending is still way off, and household debt still is at nose bleed levels.

How much longer can payment moratoriums, how many more stimulus checks, and further bailouts required to keep cascading bankruptcies at bay?

This next chart is busy, so hang with me for a minute as I explain it. 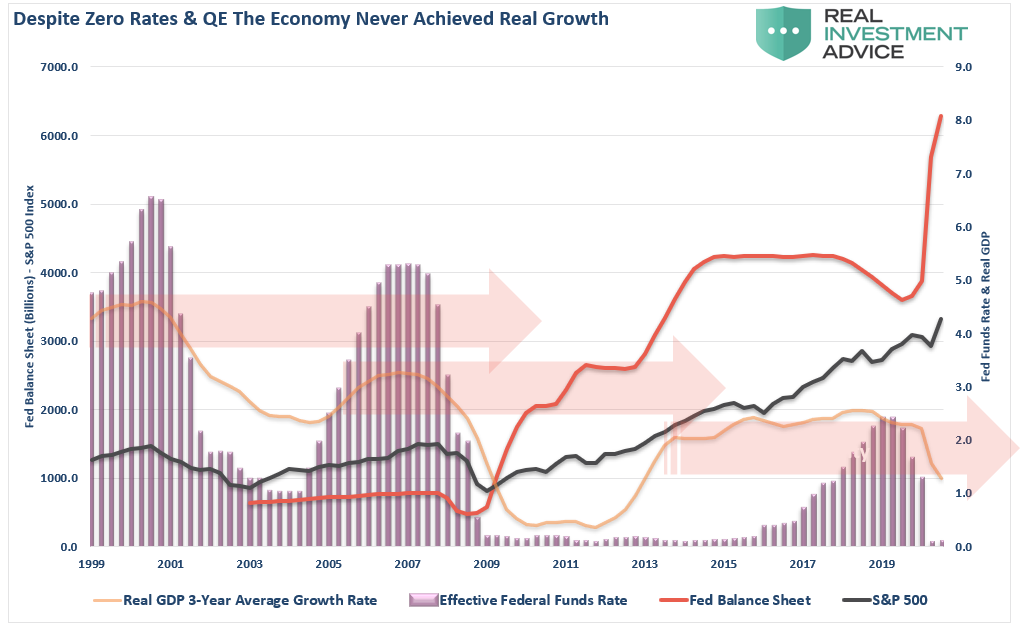 If you look, real compounding annual inflation in the 2010s was well higher than the little less than 3% GDP peak we achieved. We could pretty much start calling the 2010s a lost decade as for precious metal investors; the majority of it certainly felt that way.

Federal Funds Rates are again near zero and, given the record debt levels ongoing, unlikely to move up in the years to come.

The S&P 500 has been ramped higher since the 2008 GFC, and next week I will share the day versus night discrepancy as it appears to be mostly financial engineering that is propping up the index (passive investment flows).

The United States’ private central bank has been exploding its balance sheet, only recently pausing, poking a bit higher of late, ready to blast off again come next years that follow for many of the inefficient debt-laden sectors we have been discussing.

It is a given the Federal Reserve's balance sheet is going to double digits, likely sooner than most might think. We have covered on this channel how it may end up having to multiple four to six times by the end of the 2020s as it fully monetizes and buys up the vast majority of the US Federal Government's coming debt issuances and rollovers.

Of course, this is the Global Fiat Currency Race to Debase, so we're not the only ones blowing out our central bank's balance sheet, attempting to keep the system from falling apart. 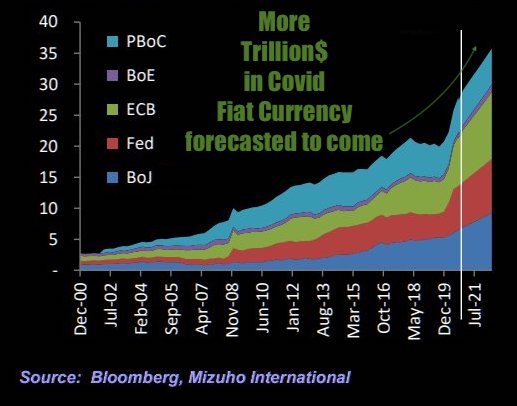 The Bank of Japan is ahead of the curve; they own about 60% of its Japanese ETF market and nearly one-tenth of the entire Nikea stock market to encourage risk-taking and inflation.

The European Central Bank, Bank of England, and the People's Bank of China. They are all forecasted to blow their balance sheets further as they start soon injecting direct Central Bank Digital Currency (CBDC) systems to try and stoke price inflation to more easily debase our collectively expanding debt piles.

Gold and silver’s fiat Federal Reserve note values have recently been moving sideways to down as we begin to wind down the month of November 2020. We are creeping on perhaps another massive COMEX delivery month for the record-sized delivery year 2020 for both precious monetary metals.

There are only a handful of trading days left before December stopped contracts and contract rollovers begin.

Those looking for buying the price dip opportunities should keep your head on a swivel in the coming trading days and weeks.

Mind both silver and gold’s 200-day moving averages and the typical spot price raids that happen around the thinly traded Thanksgiving holiday next week.

Thanks for coming by SD Bullion. Take great care of yourselves and those you love.