Brace Yourselves For a Further Potential Downside

Financial Markets ran into indecisiveness this week as indecision over the coming US election, increasing viral cases, and business lockdowns in Europe and the USA. Add to that the lack of pre-election fiscal stimulus for the US consumers. Many of them are out of work or now have businesses operating in failing industries.

Brace yourselves for a further potential downside buying opportunity later, likely soon enough, as all these factors appear to be driving financial market sentiments lower.

Let’s simply look back at late 2016. Back when we lived through one of the most volatile 24 hour periods in the gold market. Where the spot price of gold rose $50 an ounce on Trump's shocking victory news, only to be slammed by $100 oz shortly after that by a still record-sized COMEX gold futures contract trading volume.

Possible market volatility due to indecisiveness on clear election winners may be coming in the weeks and even months that are to come.

In a bull market price consolidation, both the 200-day moving averages and the psychological round numbers of $20 oz silver prices and $1800 oz gold on these charts. We might target to buy into volatility and weakness.

As yet, coming infinite QE and various fiat currency stimuli are likely coming first quarter 2021, so in short. If we get a significant dip in bullion prices, and your position is not ready yet, it would behoove yourself to buy into that weakness.

This week we will cover some ongoing tectonic shifts occurring under the structure of the financial system. We will begin moving from the east to the west, hearing from some Great Reset plans and commentary by some of our most potent fiat financial world architects.

Before we start, look at this full fiat currency era gold vs. silver performance over the last five decades. I look at the 1980 catch up for silver beyond gold and believe we will soon see something akin.

For silver bullion bulls out there, mind this still large gap below and position accordingly. 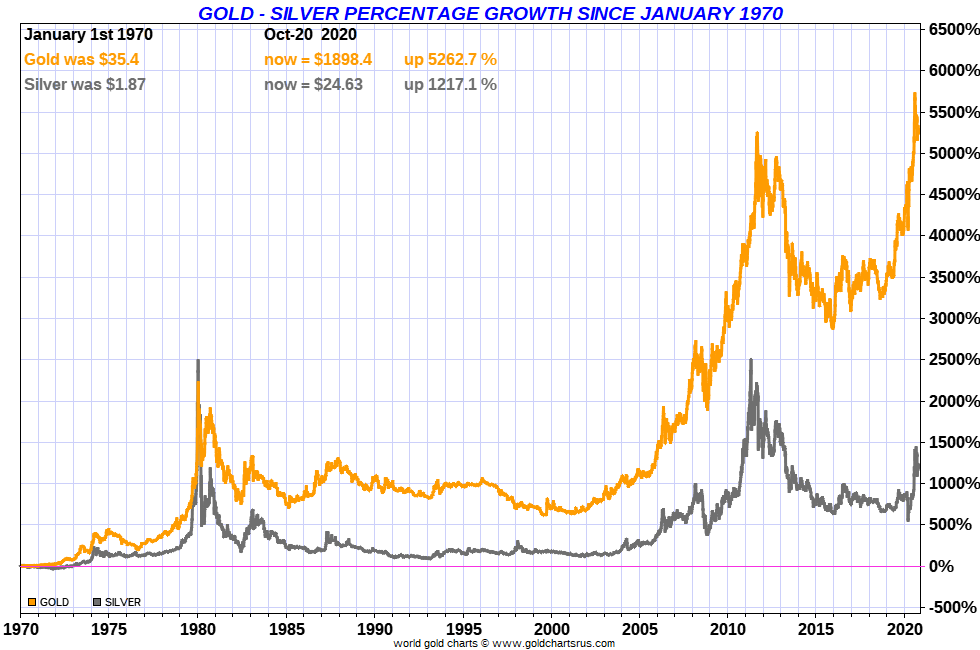 Which central bank will launch the world’s first digital currency?

Last week on this channel, we covered how Official Russian Gold Reserves are the highest percentage versus their local fiat currency monetary base issuance supplies.

China has this, its underreported Official Gold Reserve Holding, which mimicked Russia.

Let's look at the March 2009 coordination between Russia and China as their official gold reserves have since correlated as a signal to the world.

But let's look further at the reality of physical gold bullion flows since 1995. The Chinese government could declare massive increases in its official gold reserves if it merely moved some undeclared sovereign wealth gold bullion piles into its Official Gold Reserve total.

Let's go back and hear from the Chinese central banker during this March 2009 declaration in the London Financial Times newspaper.

We're going to run through a few clips from the over hour-long discussion on Central Bank Digital Currency development.

Call me a cynic, but is the primary macroeconomic motivation here just simply code for we have to quell riots while also nominally devaluing the world record fiat debt loads and unfunded liability promise piles we have accrued. And while some private pension plans can default, we, the sovereign United States of America, will go the typical inflationary route (like after World War 2).

After all, our leaders would never deceive us, right?

A coming CBDC will likely usher in Universal Basic Income payments, which should help the Federal government get more price inflation and turn the currency’s velocity back up.

Drastically escalating gold prices, silver values, and later other commodity prices should help that cause too.

If you don't know what the Fed Now Service is, we covered it on this channel in August of this year in a video entitled "FedCoin Cashless Trends 2020s // Bullion Opt-Out Clause".

The BIS designed this handy graphic a few yrs back which reminds me that flawed humans only make money bound for valuelessness.

The good news is, you and we still have some limited time to steer clear of much of it.

Thank you for coming by, and take great of yourselves and those you love.