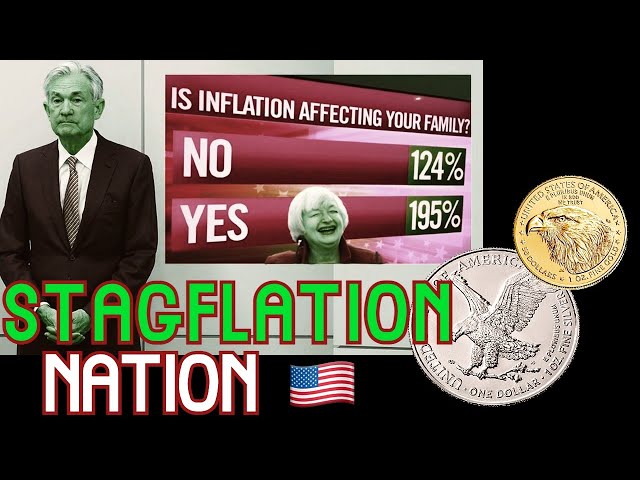 Welcome to our stagflation nation, which means economic stagnation and rising prices thanks to massive fiat monetary supply expansion.

Costs increasingly rise to levels beyond where most incomes cannot keep up.

Where and when we relearn the hard differences between nominal price and real value.

But first, Bridgewater’s Ray Dalio & his Chief Investment Officer Bob Prince went on various paper asset financial channels to pound the table pointing out our world’s recent stagflationary paradigm shift. This week we infused into our video a few highlights.

If this indeed becomes another decade under secular stagflationary forces.

The closest proxy in the 1970s. And while crude oil and the majority of commodities have been performing very well thus far, gold and silver have barely begun.

On average, during the 1970s, silver and gold bullion gained over 20% per year for the entire decade.

And on a long-term historical basis, the stock market remains currently at values dwarfing the commodity complex overall values. Stuff on a relative basis is still historically cheap to financial assets.

But commodity supercycles can rage for decades, and the world appears to be lining up for this decade and beyond increasingly higher costs for commodities.

In terms of the king's monetary asset, gold bullion’s secular 21st-century bull market versus its tinier 1970s version still has a long roadway ahead.

The chart link below compares gold performance in the 1970s vs. gold in the 21st century.

this version taking +2.5Xs longer for trillions of reasons pic.twitter.com/sCA3vQuJ8U

This current secular gold bullion bull is markedly slower, moving over two and half times less quickly than the last 1970s version, thanks to seemingly ongoing financial market interventions and trillions of other contributing factors.

But the point here is that gold’s value still has a long way to climb, especially if this decade turns into stagflation and ultimately a crisis in store of value confidence.

Both silver and gold spot prices climbed slightly higher on the week.

The gold spot price closed above the critical $1850 oz level. At the same time, the silver spot price finished its week, coming into a holiday weekend above $22 per troy ounce. The gold-silver ratio fell to 83.

The platinum spot price remains close but is still struggling to get above $1,000 oz relatively at historically cheap valuations versus gold and palladium. We have also seen some encouraging fundamental driver news for platinum of late.

The speeding of automakers switching from palladium to platinum for industrial and environmental standards appears to be quickening.

Many Russian palladium bar hallmarks are now banned for sourcing in the City of London and other key price influencing jurisdictions.

Russia provides nearly 30% of the world’s palladium bullion and is the world’s second-largest platinum ore supplier.

The more major bullion centers refuse their bullion bar hallmarks, the more pressure on the system for readily available supply.

The 2020 covid lockdown of London and divergent lease rate spike in platinum drove about a half-million ounces of platinum into the NYMEX platinum warehouse. Still, since then, mainly Chinese interests have withdrawn over half of the inventory in the past just two years.

As China continues building its ambitious hydrogen economy and more automakers switch to platinum over palladium, this NYMEX platinum drain may continue.

Today I stumbled upon this chart illustrating fine silver bullion investment demand over the last ten years in terms of troy ounces overall. It does an excellent job presenting from which nations' silver investment demand has been growing and or slowing.

While I expect the old 2015 high mark in troy ounces sold to get blown away in the coming years, India returning fully into the silver bullion demand levels would likely expedite that.

Perhaps the poor man’s gold bid will increasingly return as the fiat rupee gold price begins climbing higher and to the right in the coming years.

And to finish this week’s SD Bullion market update, in another lesson of doing what the central bankers are doing.

The nations of Europe have to know the score. While the fiat Euro gold price has increased fivefold, their fiat central bank’s balance sheet has multiplied nearly nine multiple to about nine trillion, with next to no stopping of the trend insight.

The current head of the European Central Bank, Christine Lagarde, did not inspire confidence this week when asked point-blank about how the ECB’s expanding balance sheet might stop ballooning.

That is all for this week’s SD Bullion Market Update.

We wish you a happy Memorial Day Holiday Weekend for our US viewers out there and thank you to all those who have and will continue to serve our nation’s Constitutional Republic.

And as always to you all out there, take great care of yourselves and those you love.