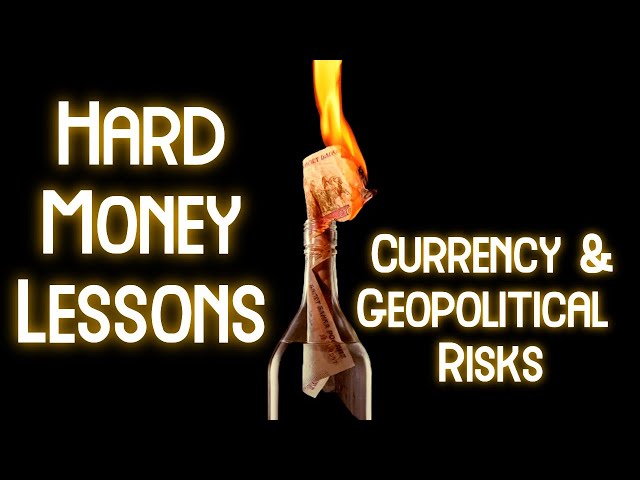 This chart we begin this week’s update illustrates that repeating fact for Russians, ever since the Soviet Union fell apart in the early 1990s.

This past Friday, just one week ago, the fiat Russian ruble traded around 83 rubles to one fiat Federal Reserve note. Today, it sells about 124, basically losing half its purchasing power in a few days.

In clockwise from the top left, you are looking at an over 50-year chart of Gold, Silver, Platinum, & Palladium denominated in the fiat Russian Ruble, which I saved about ten days ago, right around the time of the Russian Federation’s Ukraine invasion.

Here is how all four primary precious metals protected Russian wealth as the fiat ruble devalued this past week.

Of course, this is sudden and dramatic, but what goes around eventually comes around, especially once money is increasingly weaponized.

This week, we’ll look at some significant financial dominoes now falling and what unknown repercussions may result from actions taken by western powers that be.

Oh, and this week I learned a hard lesson on a big difference between the geopolitical risk involved in owning shares in a top gold producer situated in supposedly the wrong section of the world versus simply owning the end product outright.

Luckily this will be the final time I speculate in any miner, at least until bullion does a proper revaluation towards a level of fair valuation. And that number is nowhere near $2,000 oz.

A solid week of trading higher for the monetary precious metals as the silver spot price closed at $25.70 oz. The gold spot price reaffirmed its recent Russian Ukraine invasion spike by filling in beyond $1,970 oz. The gold-silver ratio fell to 76.

The platinum price ramped to close this week beyond $1,120 oz. And since nearly 40% is freshly mined in Russia, the palladium spot price has almost doubled in price this year, ending this week’s trading by breaking its record price high above $3,000 oz.

Given that general commodity values are running up walls, let’s highlight an article published this week about China’s current commodity demand, the world’s largest commodity consumer.

All four are getting closer but have not recorded record high price levels yet.

And as we are likely bearing down on the next massive global recession and potential financial crisis comes about, the policy response will probably be more of the same, enormous fiat currency creation.

Here we have the G8 nations, China, and Switzerland. The data illustrates their respective outstanding fiat M0 M1 & M2 fiat currency supplies outstanding, as well as their official gold reserves. The data on the left is from March 2018, and the information on the right is from January 2022.

Every single country has exploded its fiat currency supply issuance.

It is relatively simple, prices for the real things we need will increase this decade.

Today’s closing price for the world’s second-largest reserve currency in the world denominating gold was over 1,805 fiat euro notes per troy ounce, headed higher, and here is an apparent reason why.

The Eurozone’s producer price index recently came in at over 30% higher than one year ago. Like most nations in the world, the European Union is also drowning in debt, so raising real interest rates to combat coming inflation is not going to be their solution. Instead, they’ll predictably opt to devalue their respective fiat currency unit further.

Last week, we saw the largest outflow from the European stock market recorded for many of the inflationary reasons I cited.

Turning now to a handy illustration of the central banks of central banks, the Bank for International Settlements published in Bloomberg back in 2018.

They call it the Money Flower, a taxonomy of Currency.

The root of it starts in Gold; over 1/5th of all gold ever mined is held by government central banks because it is money without exception. In case of emergency, held on to restart confidence in the monetary system when their currency derivatives ultimately fail.

Here we will first dive into the current outstanding issue of Central Bank FX reserves with an important article published in the Wall Street Journal this week.

So here you have a mainstream financial media article giving investors the green light to start acquiring gold bullion.

Of course, they failed to mention that China likely already has near 20,000 metric tonnes or more of gold bullion it can officially declare when the time suits them.

If you have been living under a rock and don’t know, China has massively acquired gold this 21st Century. Here is a well-researched article on Chinese gold import data you can read, which verifies my statement.

Let’s move on and close with the biggest lie I heard the fiat Federal Reserve chairman say this week when speaking to lawmakers in Washington DC.

When asked about US plans for a coming Central Bank Digital Currency, Jerome Powell went on a diatribe trying to muddle in ‘get rich’ quick private digital tokens or cryptocurrency speculation with that of prudent gold bullion ownership. A misdirection of an overpaid liar.

Now that the east is fully realizing by abrupt actions that fiat currency reserves aren’t store of value money long term, the dominos will begin falling further as this decade unfolds.

And the value of the least risk-laden money there is, gold bullion is poised to revalue sharply higher as an inevitable result.