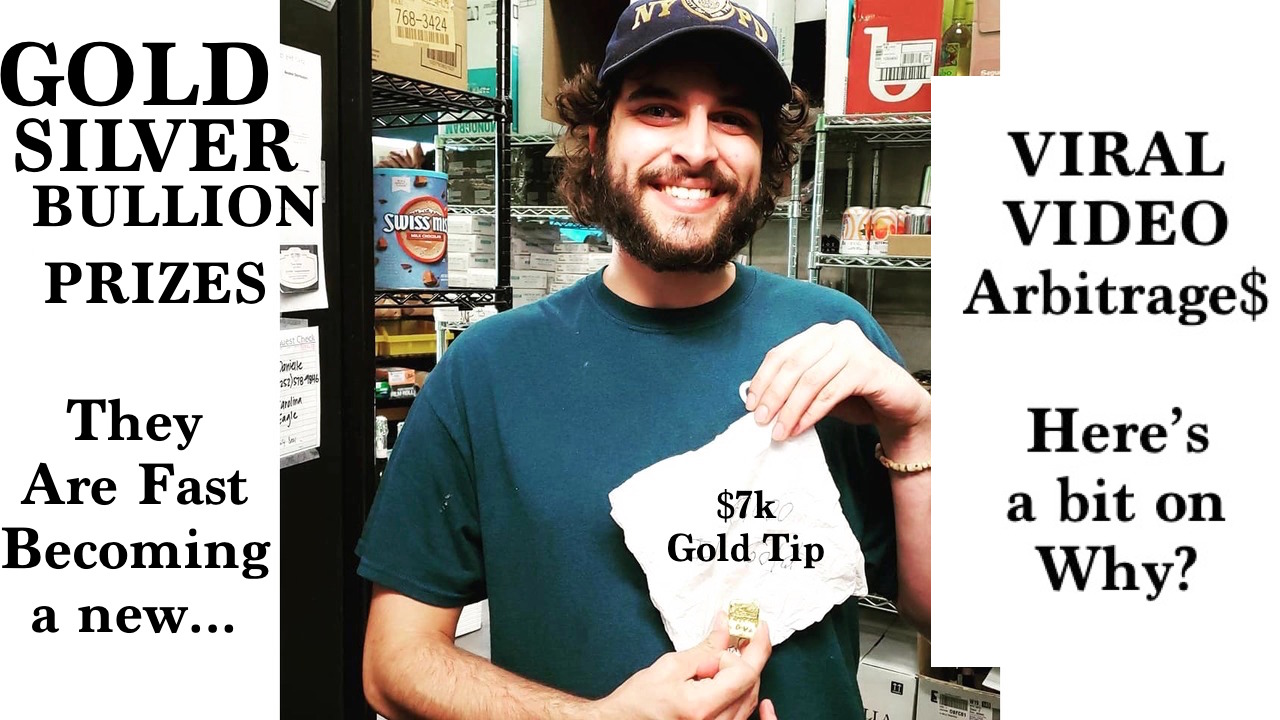 Someone just got a 5.5 troy ounce gold bar as a random tip!

OMG... this is pretty awesome!

Can we ask a few questions, now?

Go ahead, call us cynics. Perhaps haters even.

Psst.. we're somewhat secretly down with the tithing.

But the people who pulled this gold bar tipping stunt, this must be a good gig if you have earned and can maintain it.

We're not sure it is what it appears to be for some quick onlookers. This story looks about the exact opposite of giving charity and keeping the action to yourself.

But hey... if anyone or everyone can come up with a situation where everyone wins, well that is some good business baby, go on.

Like for example this nutty Canadian Gold Treasure Hunt, that allegedly just ended with supposedly some random partaking winners up in Canada.

Some two respective USD 7,000 valued gold bar tips in some random NC watering holes. An excellent stroke of luck for the folks who got them. Hopefully, they are smart enough to save them for the longer term.

But don't be some gullible surface only onlooker here either.

This news item is not just out the kindness of hearts. The media was most likely not notified by the random winners after the facts, but more so ahead of time by the same gold tipping people making the videos which will inevitably be on youtube soon enough after being edited.

Now certainly this is a bit about some charity and feel goods, but it is also about pumping video views and using people's positive emotions to gain virality and stickiness (and yes, we've seen the dark but classic Bill Hicks stand up routine on marketing, rated R if you bother to look that up).

The youtube channel behind this effort has a proven formula now with over +20 million subscribers. Good on them, we wish them more success.

But it should be rather evident for anyone who has tipped anyone with for instance a fiat $20 US dollar bill versus a 1 oz American Silver Eagle coin, which of the two makes more on a lasting impression on people.

Using gold bullion to garner attention and or get people to pay to go on wild goose chases for planned treasure hunts, well this indeed the weird age of the internet went wild. It will likely only get stranger from here.

And to get a sense of understanding on how some folks can afford just throwing around random gold bullion bar tips.

Here are some estimated data points putting these two, happy for them that got it, $7k gold tips in context.

Many savvy bullion aficionados will know the difference between tipping some quality servicemen or servicewomen in say a $20 fiat US dollar bill vs. say a troy ounce of silver.

Tip someone in silver or gold bullion, and they generally always react positively and get pumped.

Tip in fiat currency even in a big fold, like the currency, long term, it gets spent and becomes like many things, forgettable.

That is a bit about the online marketing arbitrage ongoing. It will keep playing and working because under it all, we inherently know bullion is the best money.

The superiority of bullion vs currency derivatives (invented by flawed human beings) has proven itself again and again throughout our collective history. And will do so again and again ahead.