Gold & silver have continued their surge from last week.

There are several fundamental factors causing gold & silver to continue on with their spectacular rallies, including, in chronological order:

Last Wednesday afternoon, the Fed released it's July FOMC Statement after its latest 2-day meeting. The very first sentence of the statement makes it clear:

"The Federal Reserve is committed to using its full range of tools to support the U.S. economy in this challenging time."

And indeed, during the press conference following the meeting, Fed Chair Jerome Powell made it clear the Fed will do whatever it takes to keep the financial markets operating in the way the Fed deems appropriate.

In addition to the Fed's ultra-accommodative monetary policy, which is a tailwind for gold & silver, on Sunday, August 2, on Face The Nation, Minneapolis Fed President Kashkari said the following (bold added for emphasis):

"If we were to lock down really hard, I know I hate to even suggest it. People will be frustrated by it. But if we were to lock down hard for a month or six weeks, we could get the case count down so that our testing and our contact tracing was actually enough to control it the way that it's happening in the Northeast right now. They had a rocky start, but they're doing a pretty good job right now. Now, if we don't do that and we just have this raging virus spreading throughout the country with flare-ups and local lockdowns for the next year or two, which is entirely possible, we're going to see many, many more business bankruptcies, small businesses, big businesses, and that's going to take a lot of time to recover from to rebuild those businesses and then to bring workers back in and re-engage them in the workforce. That's going to be a much slower recovery for all of us."

Translation: Unless the US goes back on a very difficult lockdown for several more weeks, the recovery is going to be even more painful.

The bottom line: These comments are a tailwind for gold & silver as it becomes clear there will be no "V"-shaped recovery, and not only that, but the recovery will take longer than most expect, which means the Fed and the government (implied) will continue major stimulus programs to support the markets and the economy.

Why exactly is that bullish for gold & silver?

Because all of the depends on confidence in the US dollar, which is being quite literally being "printed digitally" as Fed Chair Powell said in the middle of May.

There is a very difficult process of finding the metal, mining it, smelting it, casting it, refining it and minting it, so when dollars are simply created digitally, and that increase in dollars chases around the same amount of goods, such as gold & silver coins, sooner or later, prices go up, which is exactly what we have been seeing over the last several years and especially since mid-March of this year.

In addition to the Fed's ultra-accommodative monetary policy, the US Treasury released a statement two days ago in which it announced over $2 trillion in borrowing between now and the end of the calendar year.

From Treasury.gov (bold added for emphasis)

WASHINGTON -- The U.S. Department of the Treasury today announced its current estimates of privately-held net marketable borrowing[1] for the July - September 2020 and October - December 2020 quarters.  These estimates assume $1 trillion of additional borrowing need in anticipation of additional legislation being passed in response to the COVID-19 outbreak.

The debt and deficits are getting very close to the point of going parabolic, and there is really only one thing that has been proven to protect wealth against debt, inflation, currency debasement and otherwise reckless fiscal policy: Gold & Silver.

If the fiscal and monetary policy updates weren't enough tailwinds for Gold & silver, a terrible series of explosions and a major blast quite literally destroyed the shipping port in Beirut, Lebanon yesterday.

Buildings across Beirut, Lebanon are damaged the morning after the #BeirutBlast. Much of the port was also flattened when the explosion sent a giant mushroom cloud into the sky.

More than 70 people were killed and 3,000 injured, with bodies buried in the rubble, officials say pic.twitter.com/qLaGEm8sJL

To say that it looks like a nuclear bomb went off at the port is an understatement.

"I met with some of our great Generals [US military] and they just seem to feel it was [an attack]. This was not a, uh, some kind of a manufacturing, uh, explosion type of event. This was a, uh, seems to be, according to them, they would know better than I would, but they seem to think it was a, uh, attack. It was a bomb of some kind."

The events are still unfolding, but this is a catastrophic incident that includes massive loss of life and property will, at the very minimum, and with geo-political tensions already heightened in the region, cause geopolitical risk, tensions and uncertainty to go through the roof.

As I've been arguing for some weeks now, the fundamentals for gold continue to thrust the yellow metal higher: 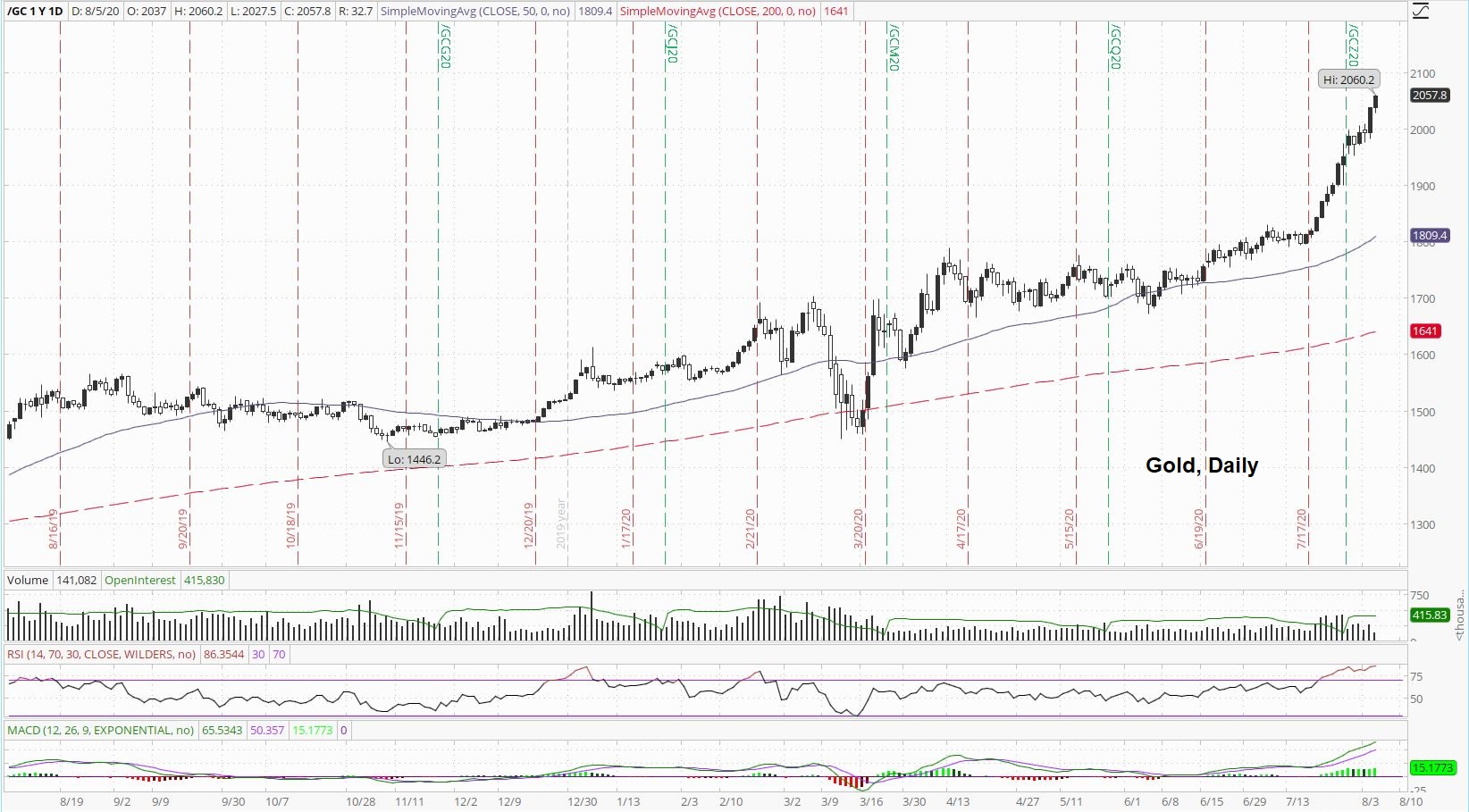 Silver is surging as well: 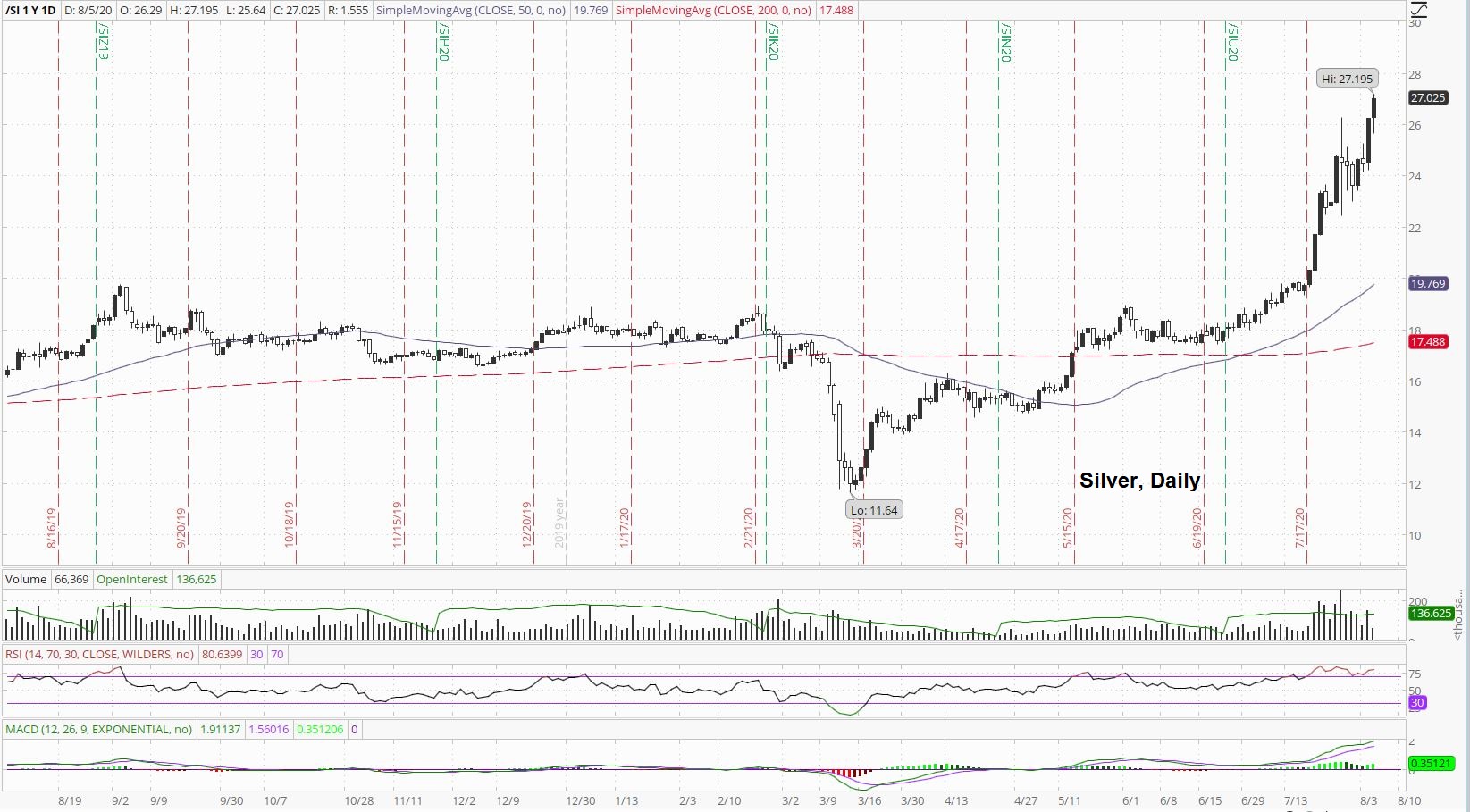 Silver's technicals are also off the charts, but just like with gold, the fundamentals seem to be the dominant market forces.

Additionally, while gold has exceeded and put in new all-time highs, silver is still a country mile from its own all-time highs, and the fundamentals could keep on providing fuel to silver's fire.

Silver's fire is shown in yet another plunge in the gold-to-silver ratio into the mid-'70s: 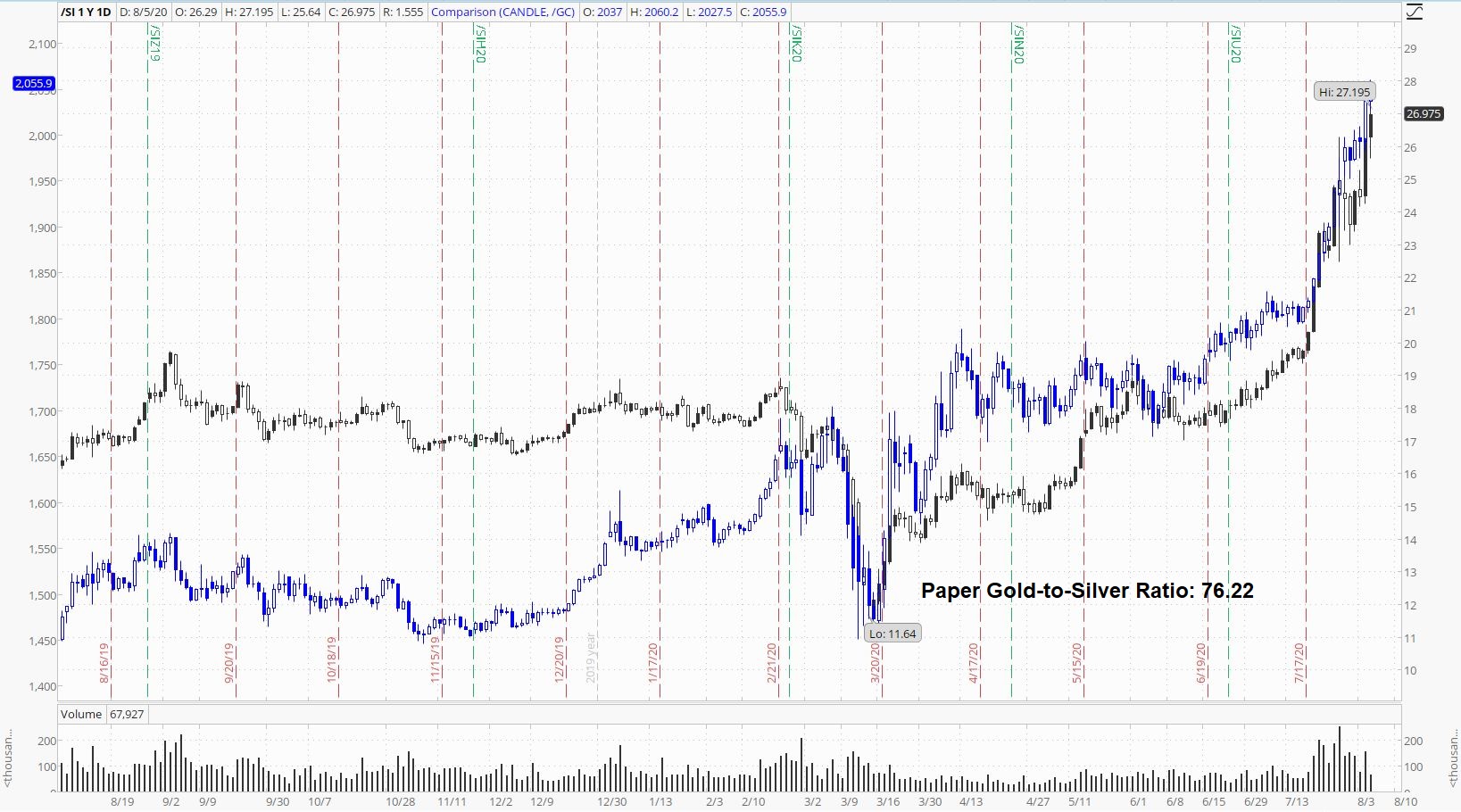 Here's the question: Are gold & silver now in a virtuous cycle of confirmation and re-confirmation of each other's move higher?

Palladium has pulled back and bounced: 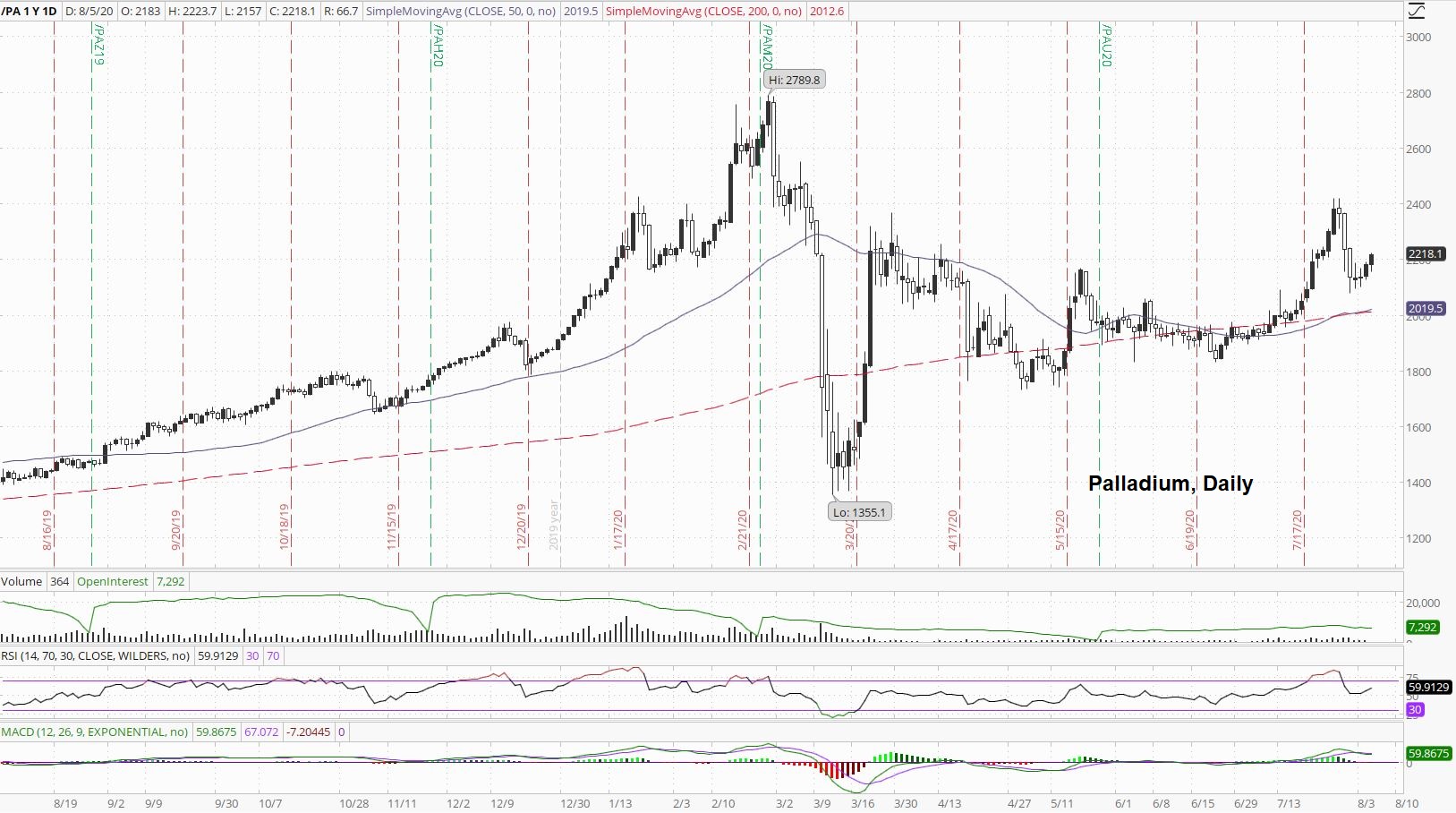 Support looks decent at $2200, but palladium has been notorious over the last several years of constantly coming down to test its 50-day moving average, which right now is just north of $2000. 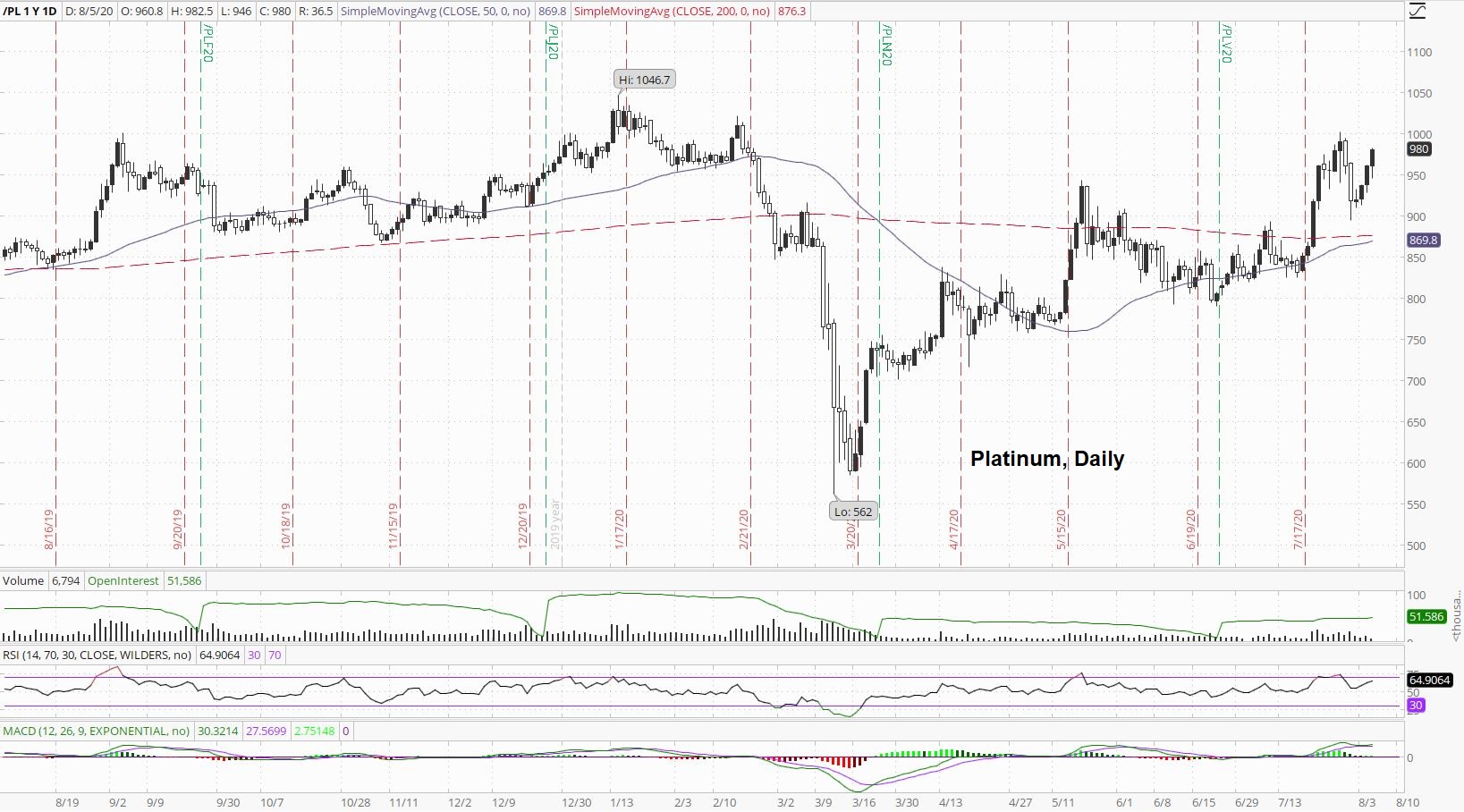 For those who like the technicals and the tick-by-tick, platinum isn't screaming "extreme" like gold & silver's technicals have been screaming.

After such a massive rise, it is nice to see copper consolidating around $2.90: 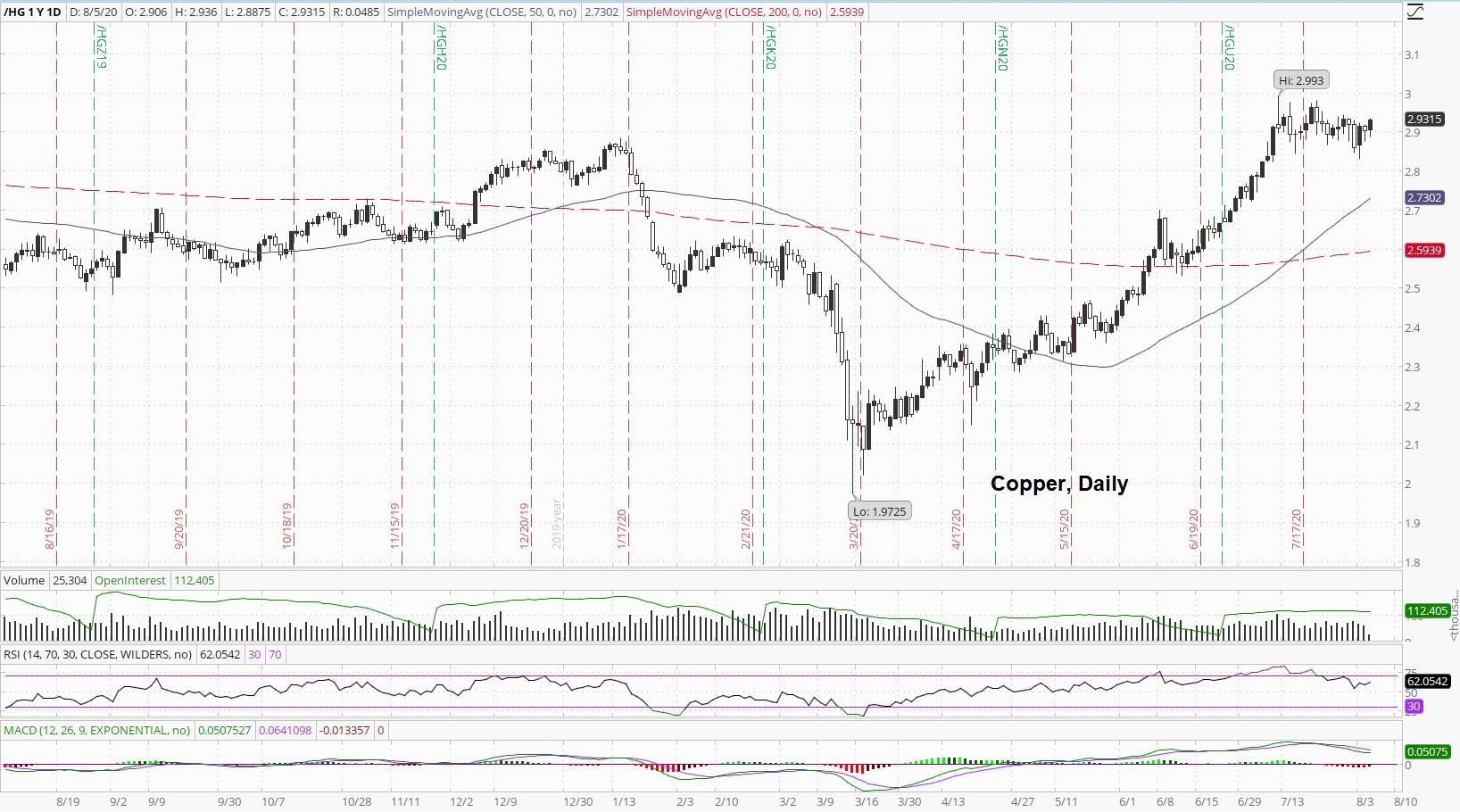 In other words, we no longer have to explain Gresham's Law, but rather, we can point to it, such as the disappearing US coins from circulation which are, while maybe not precious, are indeed metal, something which cannot be "printed digitally".

Crude oil continues to be the nailbiter: 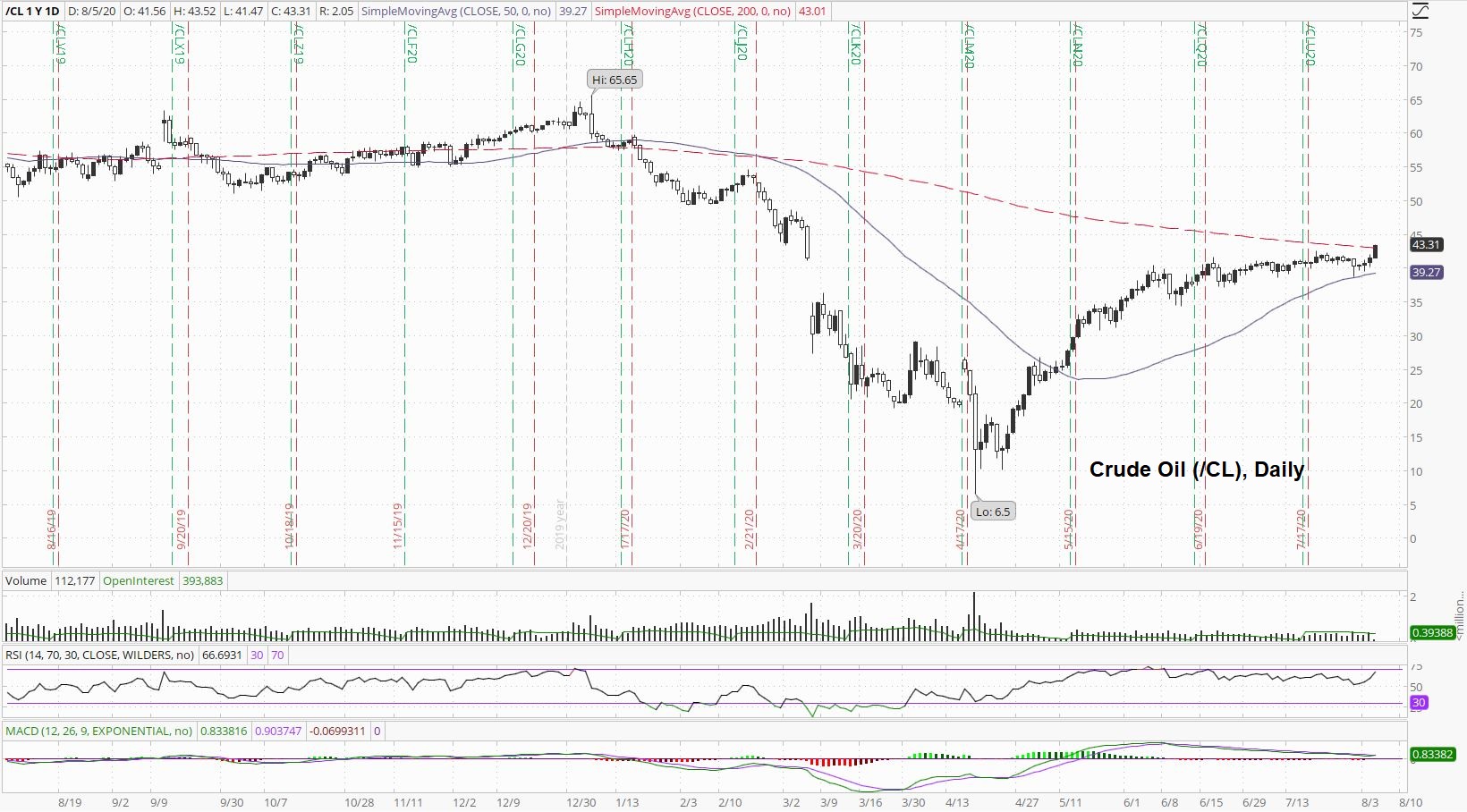 A lot of technical analysts have been looking for a pop as a signal of a short squeeze before crude oil heads lower again.

Here's the question: Is that pop what we're seeing today, or, alternatively, is there a "fear premium" getting priced-in to the price of crude oil with unfolding events in the Middle East?

Amazingly, through all of this, the fear gauge continues to subside: 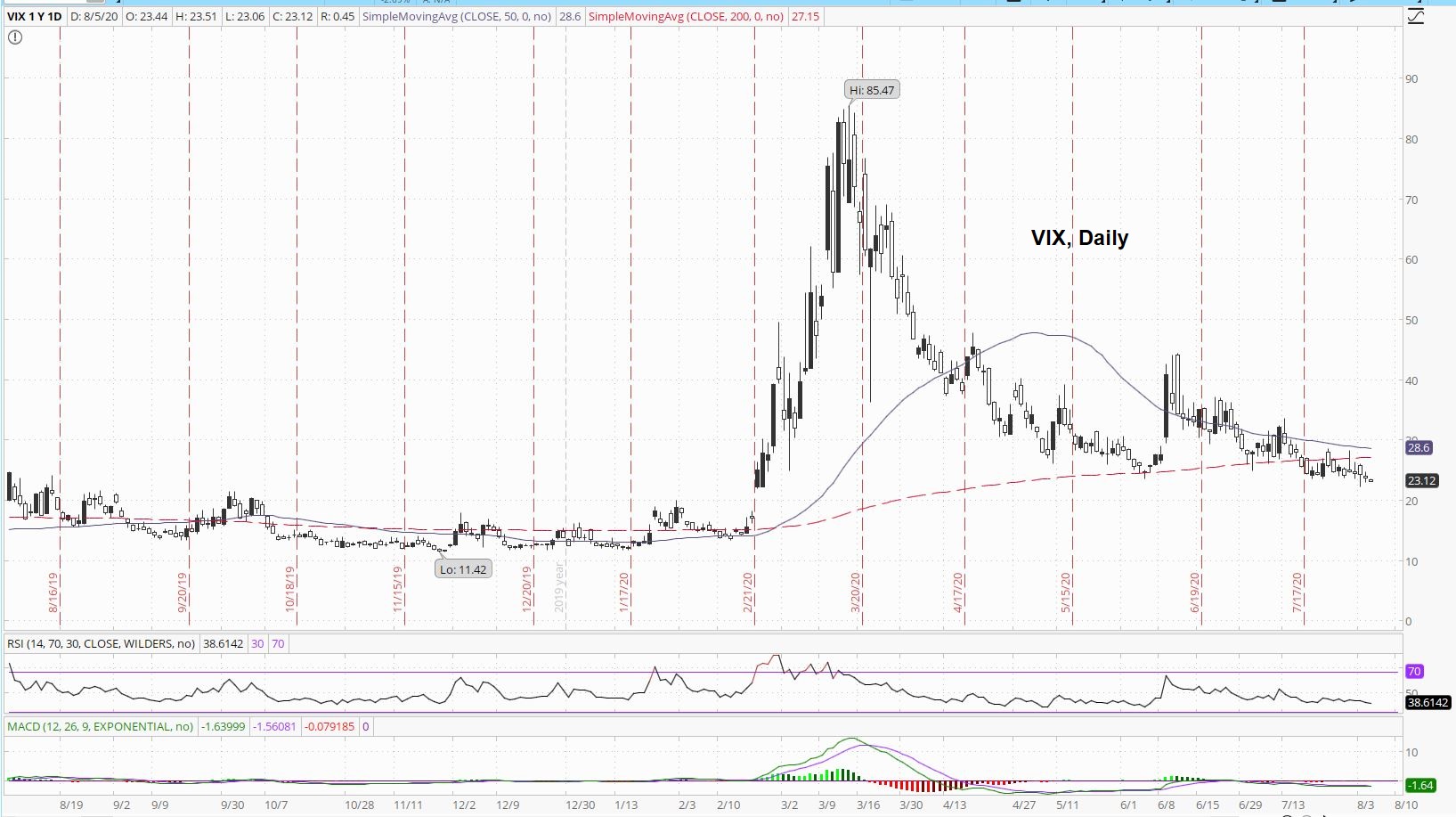 The idea that the Fed 'has the markets back' is a powerful idea, and for now, that seems to be the case, but will the Fed always have the market's back, and if so, what if the Fed's simply not able to?

For now, however, we're still hitting all-time record highs in the stock market: 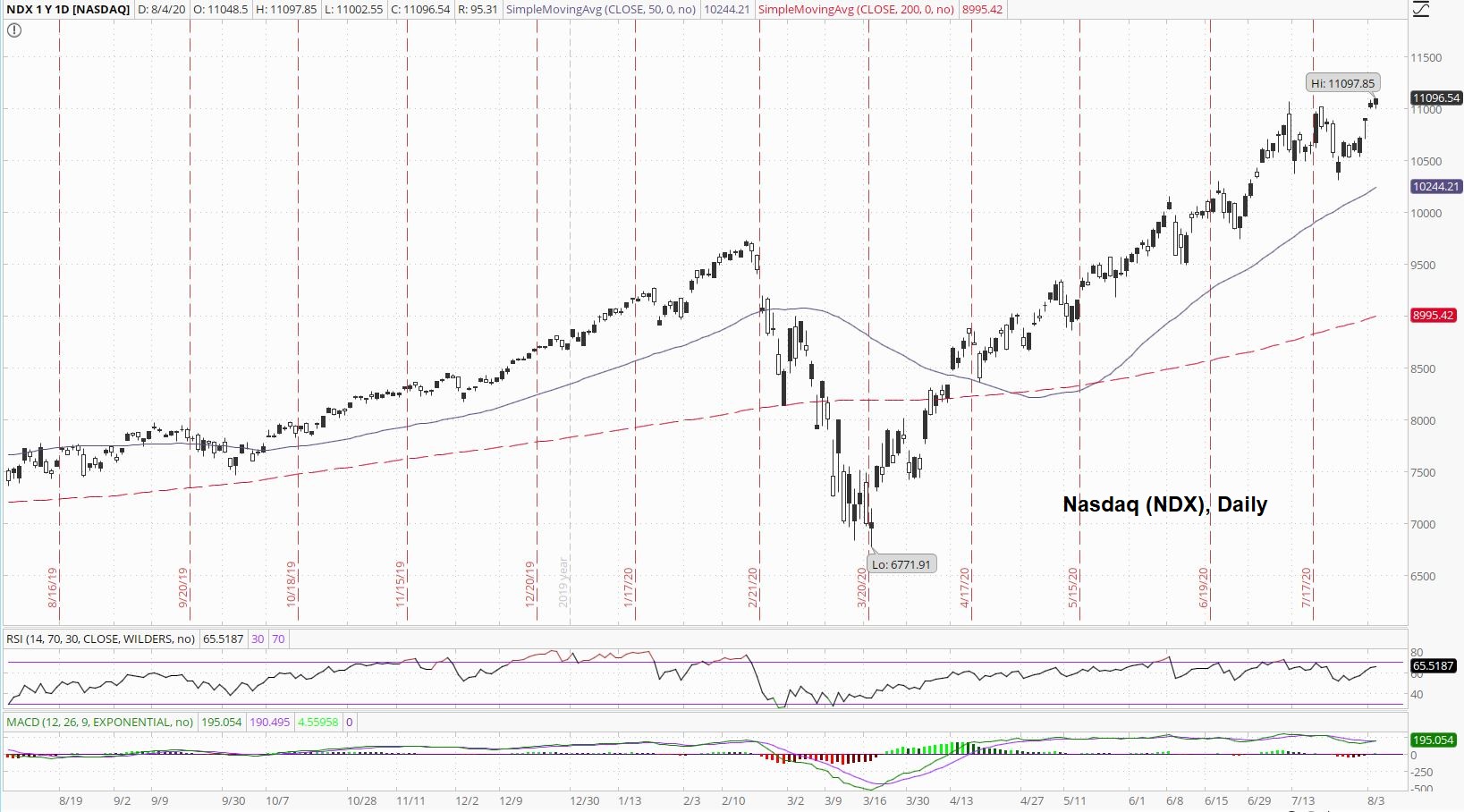 If the stock market comes down, the yield on the 10-Year Note doesn't have much wiggle room before hitting zero: 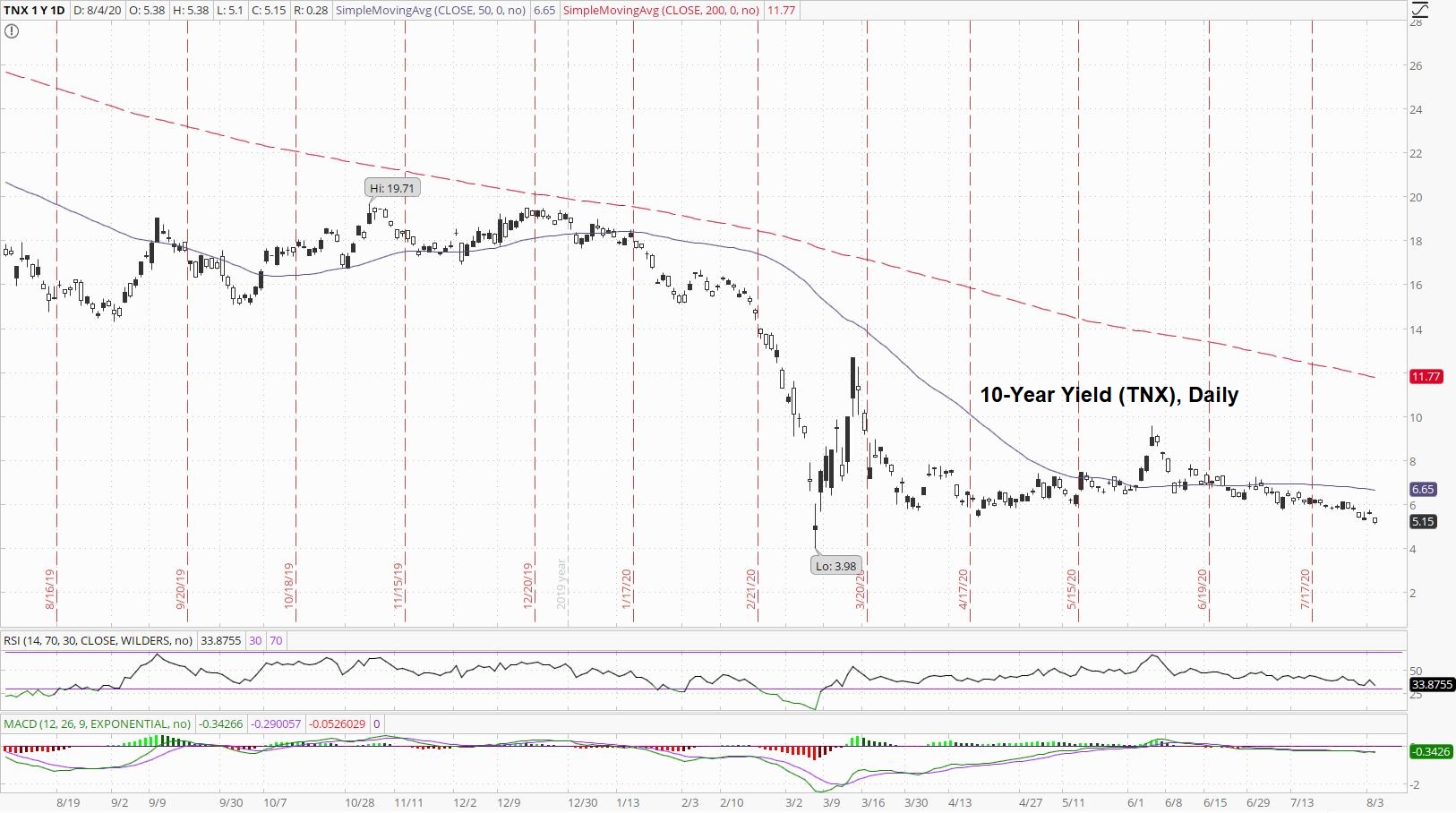 Of course, the big question now is, when will 'yield curve control' become official policy?

Additionally, what rates will be targeted?

The US dollar index is not looking so good for the bulls right now: 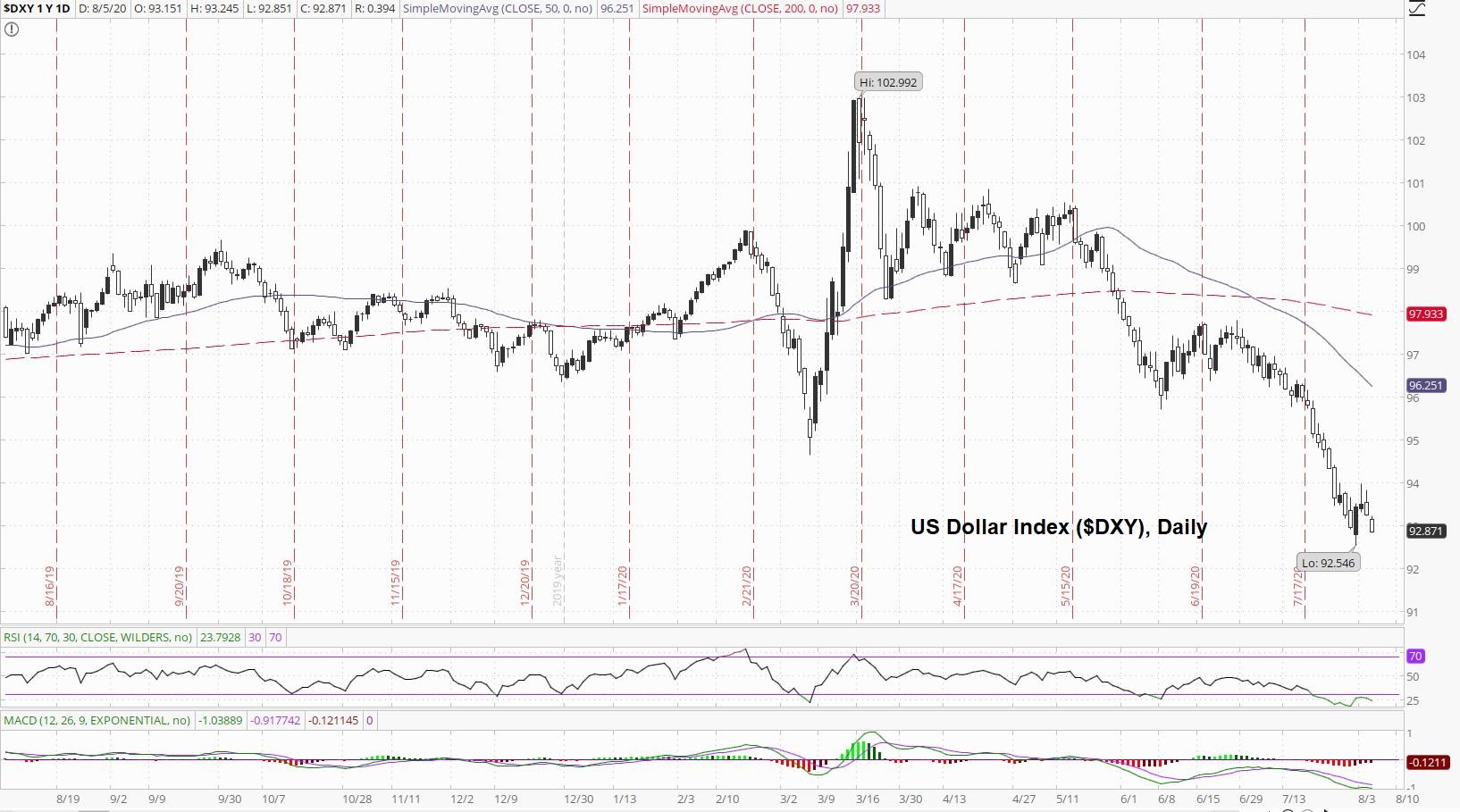 Nonetheless, it's a race to the bottom against all other unbacked, debt-based fiat currencies.