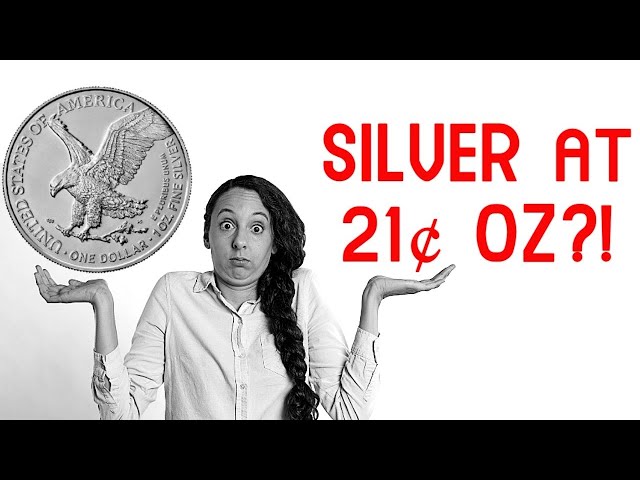 COMEX Silver Has Traded to 21¢ oz

This past week, we witnessed one of the ridiculous errors in CME Group COMEX silver warehouse reporting.

One of the COMEX approved warehouses "fat-fingered" or mistyped a comma instead of a period into their eligible COMEX pile adjustments.

In doing so, they inferred adding just over one and half year's global silver supply with a few silver laced misplaced keystrokes.

I know this because I spoke the following day directly with my contacts at the warehouse, and they confirmed it was an error indeed on their part.

And while the COMEX silver warehouse reporting data was quick to be correct by the next day.

How the CME Group (with their CEO making over $16 million a year and median employee salaries of nearly $150,000 per year) does not have protocols in place to catch this kind of obvious error is disconcerting.

It makes one wonder how many human reporting errors like this go unnoticed and then perhaps get reported by the CME Group's COMEX team for a longer time.

We learned earlier this year from the Metals Focus report on silver shortages in London Q1 2021. Over half of the supposed "Kingpin of the Silver market," JPMorgan's COMEX pile is double-counted ounces, supposedly backing up the largest unsecured silver ETF they are the custodian of.

One must think back to what Kyle Bass mentioned in 2011, and how supposedly one day, this 'free market' price will surely solve everything.

The concept of transitory is really this: it is that, uh, the increases will happen. We're not saying they will reverse. That's not what transitory means. It means that the increases in prices will happen, so there will be inflation, but that the process of inflation, uh, will stop so that, so that there won't be furth- uhn fur-.. When we, when we think of inflation we really think of inflation going up year upon year upon year upon year - that's inflation. When you have inflation for 12 months, or whatever it might be, I'm just taking an example, I'm not making an estimate, then you have a price increase, but you don't have an inflation process. And so, uh, part of that just is, uh, if it doesn't affect longer-term inflation expectations then it's very likely not to infect, eh to, to affect the process of inflation going forward. So what what what I mean by transitory is just something that doesn't leave a permanent mark on the inflation process.

Again, we don't mean, I don't mean, that, that, that, that, you know, producers are gonna take those price increases back - that's, that's not the idea. It's just that they won't go on indefinitely. So, to the extent people are, are, are implementing price increases because raw materials are going up, or labor costs or something's going up, um, uh, you know, the question really for inflation really is 'Does that mean they are going to up the next year by the same amount, so you're gonna be in a process where inflation, the inflation process, gets going?' And that happens because people's expectations about future, uh, inflation mo-, move up. And we don't think that's happening, there's no evidence that it's happening, all the evidence is that it's not happening, but, nonetheless, we have to watch this very carefully because this is, you know, uh uh, we have two mandates: maximum employment and price stability: price stability for us means inflation averaging two percent over time, and so, we've gotta be very careful about that.

A high-quality silver derivative vs. physical silver supply infographic was released this past week by the strong research team of Singapore's Bullionstar.

For the year 2020, London and NY COMEX markets traded over 234 billion derivative ounces of on-paper silver.

That is over 240Xs the amount of physical silver that got mined for that same year 2020.

In the year 2021, and since the year 2011, we have been in the fifth era when the blue and red lines have diverged.

Each of the last four times these lines re-converged, it happened with a rapidly escalating silver spot price and value.

This next, this fifth convergence of these two lines should become the all-timer for silver.

In terms of how this 21st Century bullion bull market is taking to play out versus the miniature 1970s version, the performance is taking about 2.5Xs longer for gold on a timescale to do its manic revaluation upward this 21st century, the 1970/80 bull.

There remains a considerable accounting for the massive amounts of fiat currency issuance outstanding and created since the last time gold went manic in the early 1980s.

In terms of when silver will break out of this year-long sideways trading range, I can't tell you with certainty.

What I can show you is that the 1970s silver bullion bull also had a massive U cup that it had to grind through and break beyond $6 fiat Fed notes per troy ounce before going into its manic exponential phase multiplying over 8X in just over one year following that breakout.

How long will it take not only to be again banging on the door or $50 per troy ounce but finally blow through it?

Using the 2.5X's longer duration 21st Century vs. the prior 1970s model, the year 2023 might be on time for silver's manic exponential phase ahead.

We end this week looking back at Australian analyst Mr. Barry Dawes' Q1 2021 truth bombs he dropped on CNBC Asia regarding how cheap $30 oz silver is in medium and longer valuation terms.

To those of you out there, thank you for watching.

And as always, take great care of yourselves and those you love.