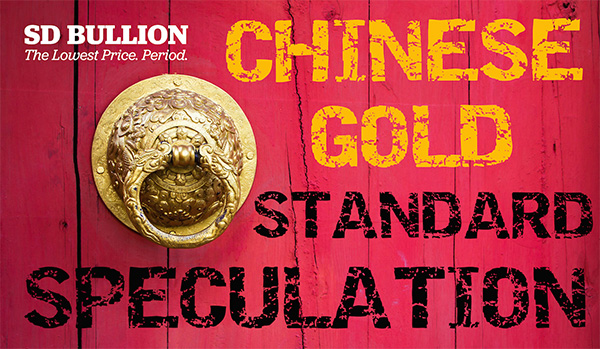 Given the recent fall to over seven fiat Chinese yuan currency units versus $1 fiat US dollar's value.

Perhaps it is worthy of digging into details as to how much Official gold China could declare and potentially further nationalize if push were to come to shove.

For close to a decade, there’s been growing speculation that China’s importation of around 20,000 tonnes of gold bullion is leading to a new China gold standard involving their yuan renminbi currency.

Since 2007, China has been the world’s #1 gold miner by volume year after year. There is a ban on exporting gold from China. Thus the more than 6,000 tonnes of gold the state has mined over the last few decades have stayed in China.

Also too, China has been the world’s largest importer of gold bullion much of these supplies coming from western gold coffers and scrap supplies.

Perhaps one of the most outspoken analysts on a potential future China Gold Standard and realistic Chinese Gold Reserve amount speculations is Alasdair MacLeod.

In 2018, we had the pleasure to interview Mr. Macleod a few times regarding his ongoing China Gold Standard forecasts and insights.

Interviewing Alasdair MacLeod in the summer of 2018, we got his timeline for a potential Chinese gold-backed currency via likely denominated yuan gold bond issuances.

For the Chinese yuan to garner acceptance into the IMF SDR basket in early 2016, she had to declare statistics on her monetary reserves and other matters officially.

Although to date the People’s Bank of China (PBOC) has barely budged Chinese Gold Reserve official figures higher, yet gold analysts know that China has no intention of fostering sharply higher gold prices until she has acquired her fill from western vaults and coffers.

To date, many gold mining and physical gold flow analysts suggest that China is severely under-declaring gold reserves the state owns (via proxies) by more than five to six times the reality. 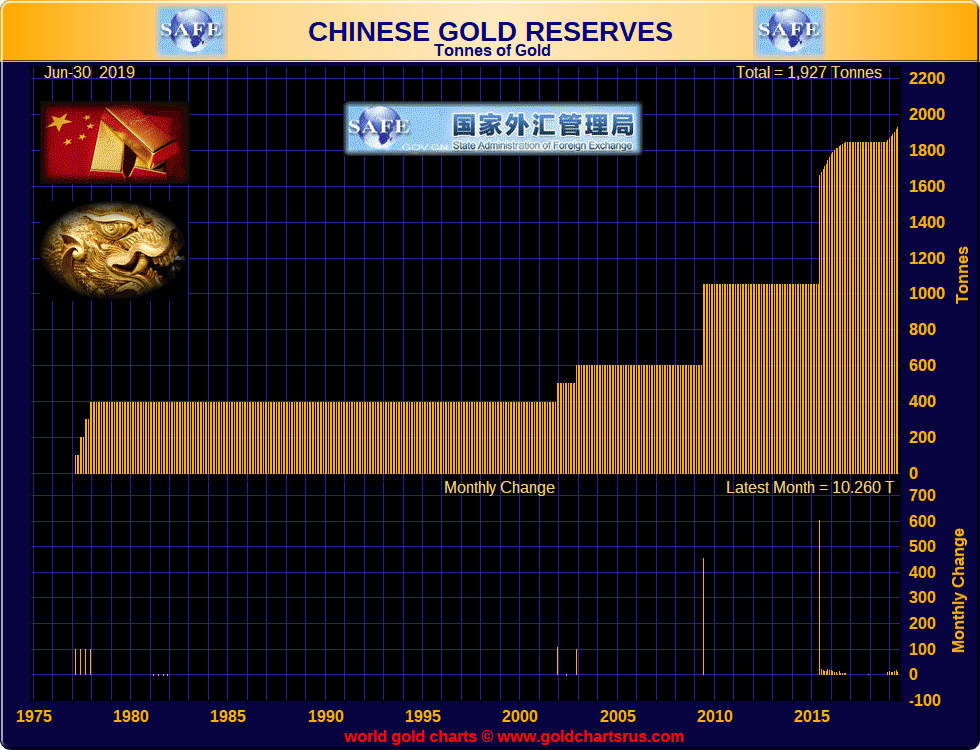 Of note is how Chinese US dollar reserves have fallen by almost USD 1 trillion in her defense of the yuan’s fixed exchange rate vs. the US dollar.

As well in her efforts in acquiring resources, infrastructure development, and business ties around the globe through the ongoing China Belt and Road initiative. 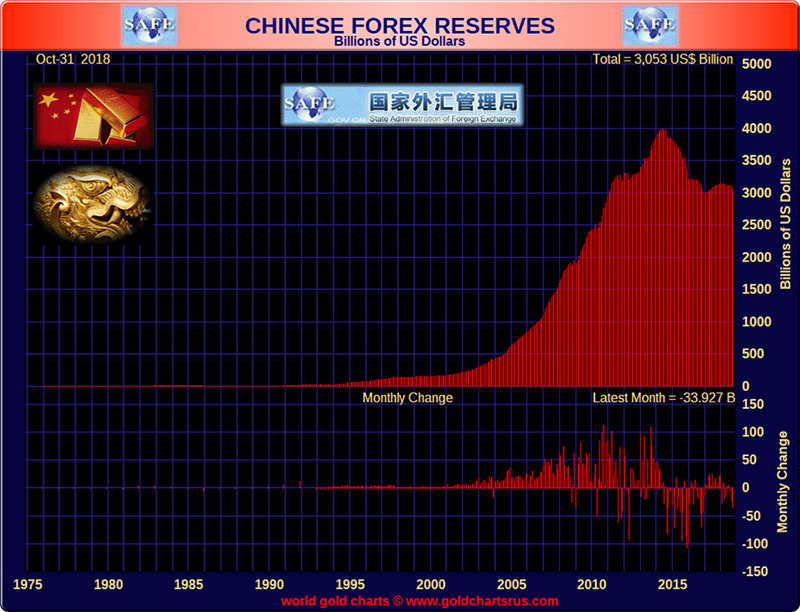 Even since early 2009, it has been apparent to onlooking westerners, that China has been encouraging its citizens to buy both gold bullion and silver bullion as a means of investment and long term savings.

Ironic because since as far back as 1974, we here in the west have often been doing the opposite given the derivative leverage allowed within our precious metal price discovery exchanges (COMEX / NYMEX).

The following is a short clip run on Chinese state media encouraging silver investment demand specifically citing the gold-silver ratio at the time being one reason for long term value.

With the 2013 gold price drop, China state media was quick to point out the understanding of its Chinese housewives gold jewelry and gold bullion buying spree.

Even in late 2018, Chinese state-run media continues to show Chinese citizens positive gold-related news stories which likely further encourage her citizens to buy and own gold for the long term.

Ever since the gold price began free trading outside of London and as the COMEX gold futures contract began trading in 1975, it has become transparent judging by daily price data that since the middle 1980s, there has been a downward western bias on the gold price.

While conversely, the daily price of eastern trading gold compounded since 1970 would be into the five-figure per ounce US dollar price range (over $13,000 oz USD).

This many decades running western gold price containment policy has neither stopped nor steeply dissuaded Chinese investors nor China state policymakers from acquiring 10s of 1000s of gold bullion tonnes over this similar timeframe.

No country has bought this much gold in such a short timeframe as has China over the past decade. Why and what is the world’s economic driver up to with gold bullion? 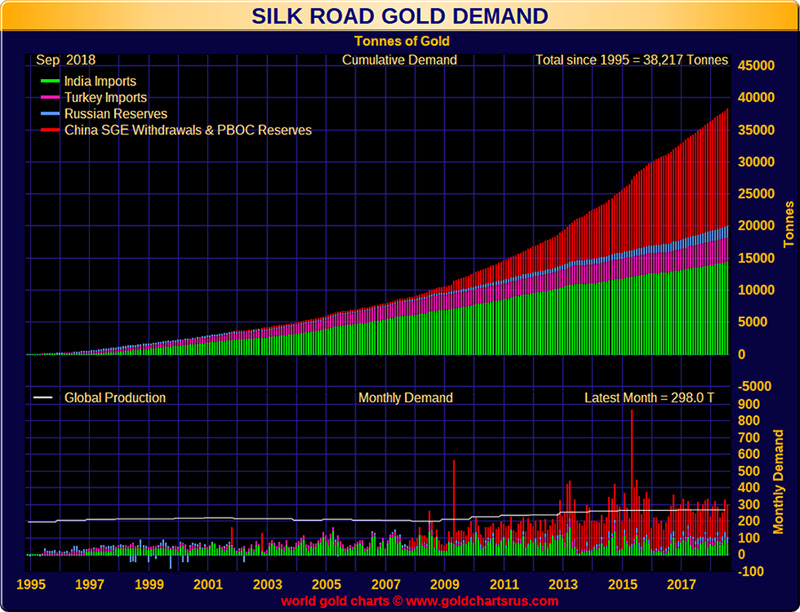 Today through China’s Shanghai Gold Exchange (orange bars in the chart below), China regularly takes delivery of more than half of the world’s annual gold mine output.

This trend is unsustainable over the long term as the new physical gold now regularly going to China (on top of the 400 tonnes she mines every year), is mostly coming from western coffers and gold scrap supplies. 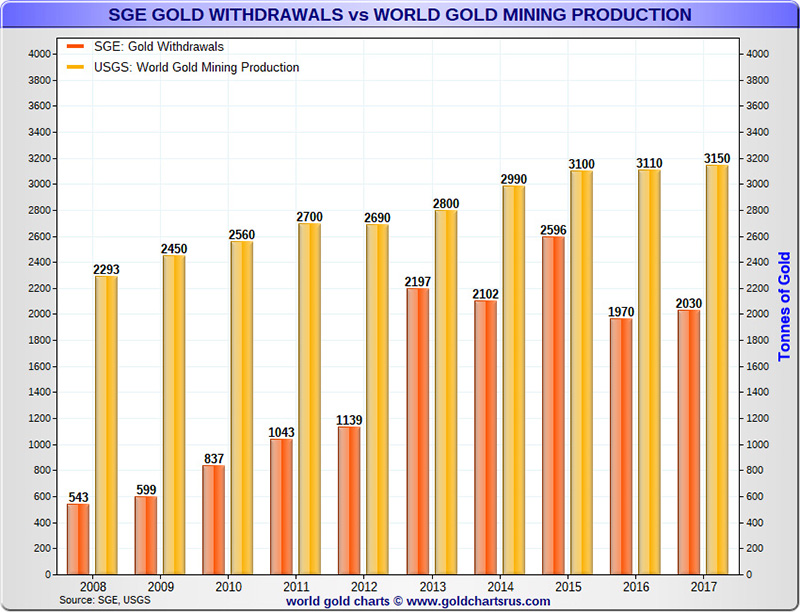 Director of a large gold swiss refinery (1 of the four largest gold refineries in the world) is on record stating that virtually all their gold refinery demand is coming from the east (specifically China) as far back as the year 2015 and prior.

The current most significant influence of the spot gold price remains with the levered derivative laden COMEX and LBMA markets, respectively.

Judging by physical gold flows, this may become unsustainable as China will one day want more influence as to the price determination of gold and other commodities that nation leads the world’s consumption. 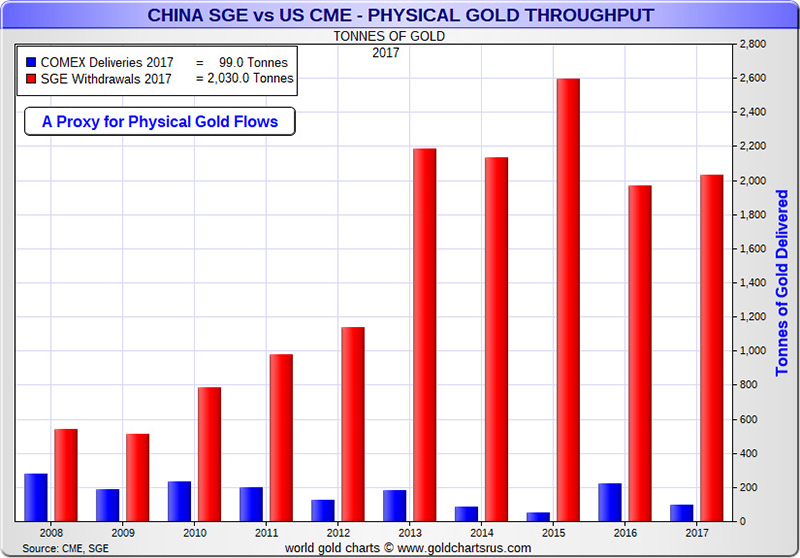 How much longer can these record eastern physical gold flows go on without disrupting the gold spot price to the upside?

Gold remains the only asset on the planet for which China can buy 50-75% of global mine output for 6 straight years and have the price do...nothing.

Cash-settled futures on a monetary asset doing their job (dampening prices) = None of this will matter until it matters. https://t.co/iqdAIEGJE8

As this trade war wages on, it is fair to expect China will want more power over choosing pricing terms, international payment infrastructures, commodity pricing in yuan, and payment settlement options for trade.

The Chinese are still openly acquiring more physical gold bullion, but at some point soon, China could undoubtedly play its gold card if she decided it was in her long term interest in doing. It could likely then be accompanied by a much higher gold price compared to fiat currencies at the time.

Chances are also high given the data and evidence that by now, China already can declare more gold reserves than the USA’s supposed 8,133.5 tonnes. Perhaps double or more than the USA claims to have officially.