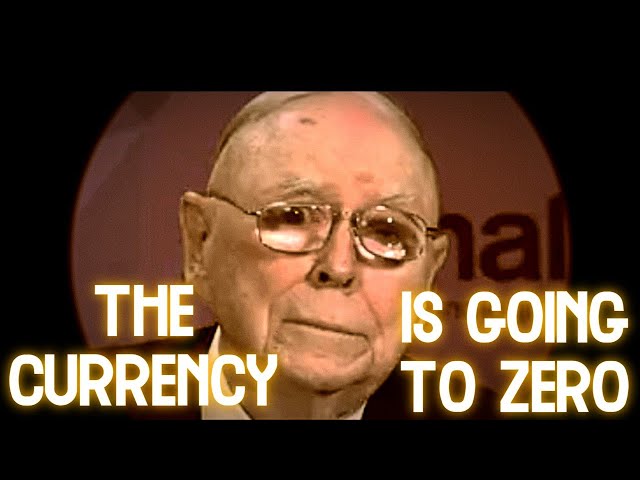 Charlie Munger: The Currency is Going to Zero

Last week as the nation of Canada took further tiptoes into totalitarianism.

While multi-billionaire Charlie Munger stated the fiat US dollar is going to zero within a century.

We and many other bullion bulls will take the under on his 100-year working thesis. Perhaps dividing his working hypothesis timeline by five or less.

Given the combined underestimation of inflation’s past and future coming, combined with the speed of technological digital payment systems onboarding, the speed of change to come is unknowable but likely faster than one might guess based on the last century’s rate.

Rather it seems more likely we’ll muddle and lie to ourselves for as long as we can, then once it becomes politically unpalatable, we may simply collectively rip the band-aid by ‘accident.’

For example, a future four-month hyperinflation scenario seems to still be the working theory of 50-year financial trader Victor Sperandeo over how this super debt cycle retreats to a sounder foundation in real value terms.

Central Bank Digital Currencies or CBDC payment systems are inbound to over 90% of the world's global domestic product-producing nations.

Another strong week of trading to upside for the monetary precious metals.

The gold spot price enjoyed its best weekly rise in the last nine months closing just under 1,900 oz for the week.

The silver spot price also finished slightly higher though it has yet to fully confirm and follow gold's strength of late.

If gold somehow continues its move to the upside it will be interesting to see how silver responds.

This week we got some updates on underlying physical bullion import-export data for last month, January 2022.

Swiss gold exports to China last month were the largest seen since late 2016, back when the then gold spot price dipped below $1200 oz.

According to Metals Focus and India trade data, the nation had a strong month of Jan 2022 imports for silver. They imported around 777 metric tons of silver or roughly 25 million ounces last month alone. The chart that you see in this week’s video is only updated through Nov 2021, but you can see where 777 tons in one month stacks up compared to the last ten years of monthly data.

And while we don't expect that to become the norm for their average monthly silver imports for this year 2022. Recall that during the 2010s, India imported over 172 million ounces on average per year.

And the nation imported less than half that on average over the last two wedding seasons locked down years 2020 and 2021.

It's fair to say there is pent-up silver demand in India, and we should continue seeing robust Indian silver bullion import data to come.

There was a good bit of celebrating this week for gold bulls upon seeing the Japanese yen gold price reach new all-time highs beyond 218,000 fiat yen per troy ounce of gold.

You can see the massive cup and handle breakout in the Japanese yen gold price chart linked above, covering this full fiat yen currency era.

Massive cup and handle charts can be seen for not just gold but also for silver in the fiat US dollar chart as well.

What is fascinating for me is how much further silver has to go in Japanese yen before getting anywhere near its 1980 high still. Closing this week around 2,750 fiat yen per troy ounce, the land of the rising sun needs to see its current silver spot price multiply by over a factor of four just to reach an over 40 year-ago high from January 1980.

Turning again to US inflation expectations, a recent late last month Gallup price inflation poll reveals nearly 80% of those polled believe inflation is going to continue going up. And while inflation is typically the end result of fiat monetary expansions, the risk here is a runaway psychological exception hard to bring back without crashing financial markets and kicking off a recession.

Here is an updated chart illustrating rigged US government BLS CPI inflation data through December of last year. And of course, while offshoring and increased productivity can mask some escalating costs in the last 21 years, the largest price escalations have been in the things US citizens absolutely need.