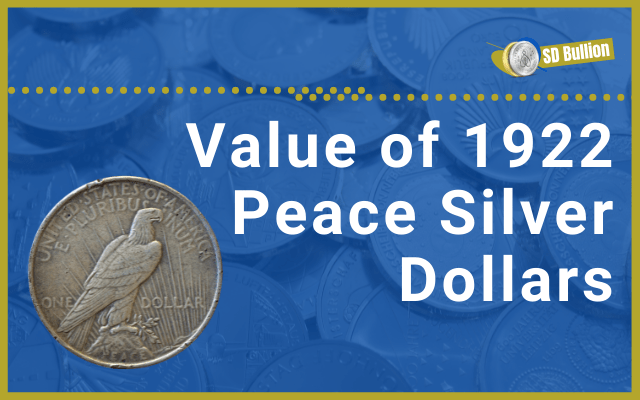 The centenary Peace Silver Dollar is a must-have item for any coin collection. These coins carry great numismatic value, as they were designed to be a symbol of the peaceful atmosphere that involved the world after the First Great War. In addition, they are worth more than their face value. Their precious metal composition is 90% pure silver.

Because of their original design, the US Mint produced a limited mintage and only for a short period. The constant need for replacement made them unworking. Therefore, through the Pittman Act, these coins were melted and reused to produce low-relief ones.

By the 60s, most of these silver dollars were scarce already, but still, some can be found in extremely fine conditions.

A brief history of Peace Dollars

The Peace Dollars are a series of American silver dollar coins, produced for circulation in the 20s, in 1934, 1935, and in 2021. Actually, 45% of the whole production of Peace Silver Dollars happened in 1922 alone.

In the early 20s, the US Government was required to strike millions of silver dollars. And they started minting them with the traditional Morgan silver dollar design, introduced back in 1878, but discontinued in 1904. The Morgan Dollar would return for one more final year in 1921.

A movement of artists and numismatists idealized to celebrate the moment of post World War I stability through the creation of a symbol: a series of commemorative silver coins using the theme of peace. A competition was organized and the winner was the sculptor Anthony de Francisci.

It took a while until the government agreed to redesign the one-dollar coin, but by the end of 1921, the Peace Silver Dollar was in circulation. The production officially ceased in 1928, after some controversial discussion about the original dies. In 1934 and 1935 some-more were coined as a result of further legislation but in a lower relief design.

The Denver Mint produced over 316.000 peace dollars dated 1964, but since they were never issued, it is believed they have been melted.

In 2021, the US Mint struck a special commemorative Peace Dollar edition to celebrate the 100th anniversary of Francisci’s design.

Story says that Anthony de Francisci found inspiration in his wife, who became Lady Liberty’s bust and the Bald Eagle, as a symbol of the American dream.

The obverse of the coin features Lady Liberty in profile: left face, wearing a pointed crown over her flowing hair. On this side, the words “Liberty”, “IN GOD WE TRUST" and “1922” are displayed around the goddess.

The reverse side contains the American eagle resting on the top of a stone, clutching an olive branch. The sun's rays shine behind the eagle feathers. The text reads “United States of America”, “E Pluribus Unum”, “One Dollar” and “peace”.

The 1922 Peace Dollar was the last US dollar to be struck for circulation in silver and became one of the most popular among collectors.

The 1922 Peace Dollar was one of the most produced coins in the history of mint. It made these normal relief design pieces pretty common, but, besides them, the Peace Dollar was also struck in proof and high relief varieties.

High relief coins are the ones with the strong strike, whose images extend above the coin's outer edge, like a 3-D image. They have higher definition levels, so the images engraved on them can be better seen and felt.

Proof refers to manufacturing and finish methods. Proof coins are made under very specific procedures in order to produce almost perfect pieces, with soft details and strong luster. They are usually samples for presentation or numismatic purposes. They can also be minted in high or low relief.

Because of their too complex designs, these two varieties ended up unworkable as a circulated version. Silver is a soft metal, prone to wear and tears, which compromises the piece's details. That’s why most of them were melted afterward and remade, in regular strikes. The units that remained, slightly worn or in uncirculated condition, became rare and valuable.

However, that change of parameters in the minting also caused some discrepancies in the coins patterns.

Mintage: more than 51 million units in 1922 for circulation, no mintmark

As it is the most common piece, they are easy to find and more affordable.

Survival Estimate: approximately 3 million. They are scarcer than Philadelphia's.

Used a lot in Nevada Casinos, so some may present signs of wear. Easily found in circulated grades.

Most of them were highly used in Nevada Casinos, which also made them suffer from wear.

In 1921, the Peace Dollars produced were all high relief. However, despite their beauty, these coins were more prone to wear and tears, which made constant replacements necessary. Then, the US Mint decided to melt these high-relief coins and use this silver to produce low relief and fewer coins for circulation. Nearly all the 35.401 Peace Silver Coins were melted.

Mint: Philadelphia Mint in 1922, no mintmark

According to the finish method used, there are 4 types of proof Peace Dollars:

The value of an item, especially if it is a collectible one, is influenced by many factors: history, design, raw material, production methods, rarity, and also the condition. The most used grading system to evaluate conditions is the Sheldon Coin Grading Scale, which is internationally accepted and very detailed.

High-valued coins have strong strikes and full details preserved. Here, for example, there are some of the concepts used to classify coins conditions:

The massive production of 1922 Peace Dollar units ended up devaluing them. So, unless it is a rare, uncirculated condition and unique piece, low relief units tend to be priced for their intrinsic bullion value. Silver spot price may vary a little, but usually, these coins are priced from $18 to $50

High relief 1922 coins were melted at that time because they were considered unworkable for circulation. The only one that was preserved, though, has an estimated value of $137,776.

According to the US Coin Book, these are the 1922 Peace Dollar coin prices nowadays:

The first thing to be considered is the numismatic value. The US Mint minted coins for the Peace Dollar Series for some years and due to their disturbing history of producing and melting circulated versions, some variations are extremely rare and valuable. Despite their massive production at that time, having an item of each year may be a challenge for those interested in a complete collection.

Another aspect to be considered is that Peace Dollar coins are essentially made of silver. So, beyond the numismatic value, there is the bullion content. And in this case, even the regular relief coins that may not be in great condition, carry the silver melt price from their original composition.

Graphs have shown that bullion value has been relatively stable over the years, despite the market fluctuations, and have pointed out that a varied investment portfolio, which includes bullion physical assets, may be seen as an interesting way to preserve wealth.

Which Peace dollar is most valuable?

According to the USA Coin Book, the most valuable one is the unique 1922 High Relief Peace Dollar, which is worth $137.776. Also, the 1922 High Relief Proof Peace Silver Dollar is estimated at $100.000 each, considering that there may be only 11 survival units. But in a recent auction, one of these high relief proof coins reached $329.000.

How much is a 1922 Peace silver dollar worth today?

Silver coin values depend on the condition they are in. In good conditions, they value from $20 to $30 on average. An uncirculated version may value a little more, from $50 to $170. A very rare 1922 high relief proof coin is estimated for $100.000 approximately. Besides their numismatic value, Peace Dollars are essentially made of silver, which also gives them bullion value.

Peace Dollars are composed of 90% silver and 10% copper. This alloy is good enough to make coins, but not to maintain luster and design strikes strong over the years. Silver bullion is a malleable metal and prone to wear and tears. This is one of the reasons why the Peace Dollar mintage was the last series of American coins made essentially of silver.

How can you tell if a 1922 peace dollar is a high relief?

Some discrepancies in the design of the coins were pointed out after that process of melting the high relief coins and minting low relief ones for circulation. But the first difference is the relief itself. The design images extend above the outer edge of the coin, like a 3-D image in which concaves can be seen and felt.