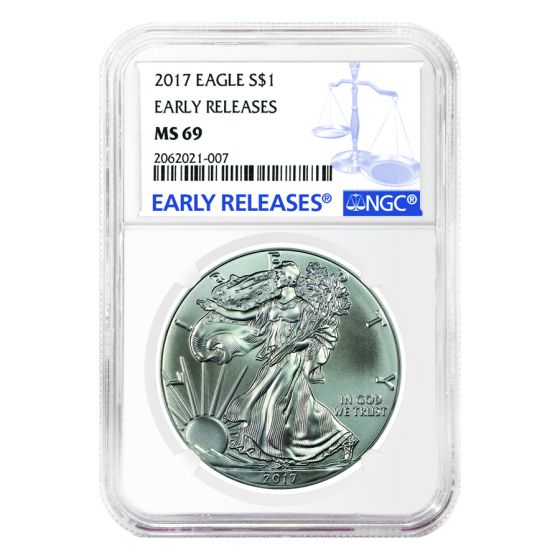 Marking the 31st release of the One Ounce American Silver Eagles, the 2017 version of this coin is as sublime as ever. Featuring iconic and internationally acclaimed designs on the obverse and reverse, they have been one of the most popular precious metal products in the world. Each of these coins has been graded and certified by the NGC (Numismatic Guaranty Corporation) and has been assigned a grade of MintState 69 (MS-69) and were also minted within the first 30 days of production.

Certified to be in 'near-perfect' condition, these MS-69 Graded Silver Eagles are a favorite among buyers as they hold only slight premiums over the ungraded variety of coins.

First released in 1986, the American Silver Eagles quickly gained popularity in the following years as the official Bullion Silver Coins of the United States. Boasting an astounding mintage of 3 million Eagles to date, the Silver Eagles are certainly a hot commodity in the Bullion market.

Each 2017 American Silver Eagle is minted from 1 troy ounce of pure 0.999 Silver (Ag). Moreover, these coins are backed by the United States Government and have been assigned a face value of 1 Dollar (USD).

On the obverse, the famous Lady Liberty design that was first featured on the Walking Liberty Half-Dollar is seen imprinted. She has the American flag draped over her shoulders as she strolls towards the rising sun.

Meanwhile, the reverse of this coin showcases the famous Bald Eagle image, designed by John Mercanti. It shows an elegant Eagle, perched behind a striped shield; the Eagle holds arrows and an olive branch in its talons.

Classified as 'First Strike' coins, all these coins are certified to be minted within 30 days of the date of release. Ensure that you snag these MS-69 graded American Silver Eagle coins to add to your precious metal collections and tangible investment assets.