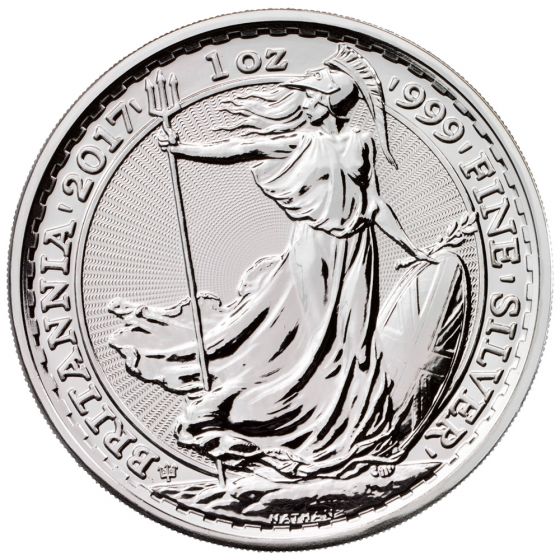 Celebrating the 20th anniversary of the Great Britain 1 oz Silver Britannia Coin, these 2017-issue coins feature a special mint mark (a "20" marking the 20th anniversary, within the symbolic shape of a trident) for the very first time. Moreover, the limited mintage from the Royal Mint, of just 120,000 coins ensures that both collectors and investors will snap up these coins soon.

Each of these Silver Britannia Coins contains 1 troy ounce of 0.999 fine silver, in addition to a face value of 2 GBP. Moreover, they are in BU condition, ensuring that they are shipped to you as received directly from the Royal Mint.

Ever since Britannia series of silver coins was launched in 1997, the demand for each annual iteration has been staggering. They were originally available in one-half, one-quarter, and one-tenth variants each year, but the Royal Mint added a five-ounce coin and a one-twentieth ounce coin to the series in 2003.

The obverses of the coins feature the relatively new portrait of Queen Elizabeth II, created in 2015, displaying the fine detail and creativity of the artist. Interestingly, this is only the fifth change in Her Majesty’s portrait to date. In fact, Jody Clark, the artist behind the portrait, is the youngest engraver ever to engrave an official coin of the United Kingdom.

The image of Britannia, the mythical Guardian of Britain, graces the reverse. She is seen gazing toward the sea, fighting against a strong gale, proudly holding up a trident and shield that protect the great nation of Britain from harm, poised ready to attack if threatened.