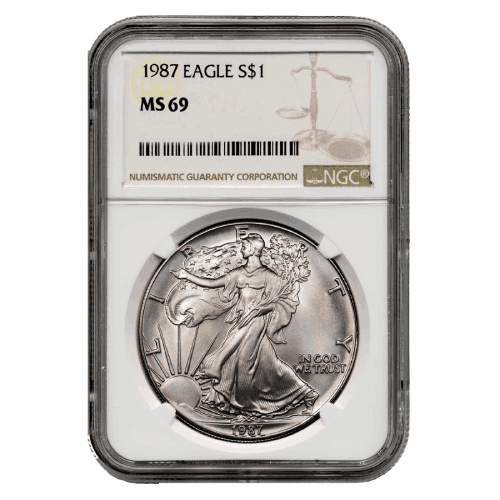 Featuring only the second release in one of the most popular coin series in the world form the US Mint, these 1987 One Ounce American Silver Eagle coins have been authenticated, graded, and sealed by NGC. Each of these coins is assigned an MS-69 grade, indicating their near-perfect condition.

Although MS-69 is not the highest grade that can be allotted to a coin, this grade is popular among those who want coins in near-perfect condition, without bearing the high premiums that the perfect variety commands.

Each of these coins is struck using 1 troy ounce of 0.999 pure silver; they are assigned a face value of $1 (USD) each.

Encapsulated by NGC for safeguarding against tampering and counterfeiting, these 1987 American Silver Eagles come packed in a sealed plastic slab with a brown label – detailing the coin’s year of issue as well as the serial number assigned to it during the grading process.

The famed Walking Liberty design is depicted on the obverse of this coin, portraying Lady Liberty striding toward the rising sun, while clutching olive branches in her arm. Created by Adolph A. Weinman in 1916, this design has become one of the most acclaimed portrayals of Lady Liberty – successfully capturing the core ideals of the United States.

Since these silver coins are part of only the second release of the American Silver Eagles series, they are popular among those who want to complete their Silver Eagle collections with pristine, graded MS-69 coins. Moreover, their pure silver content and high desirability makes them excellent investment assets as well.