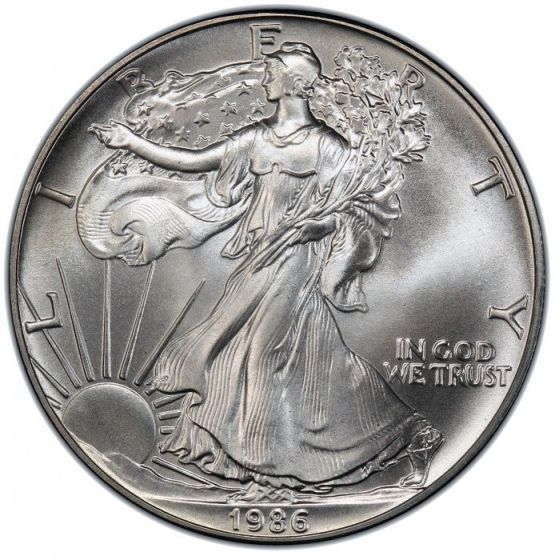 These 1986 Silver Eagle Coins are considered to be in “cull” condition. Any coin that is in bad condition, irrespective of its material or design, may be designated as a cull. This classification can be justified by any amount of faults, ranging from cosmetic issues to structural defects. Holes, scratches, pitting, bends,serious retooling, dark toning, and even poorly executed repairs are prevalent among cull coins.

The obverse of these coins feature the Walking Liberty design of the Saint-Gaudens dollar, with a rising sun at the lower right. Liberty is printed across the top, and In God We Trust appears on the right side, below the Y in Liberty. Lady Liberty is depicted walking towards the rising sun with her robes billowing in the wind. She carries olive and oak branches under her arm -- signifying peace and strength.

The reverse features a Bald Eagle, as depicted on the Official Seal of the United States of America, clutching an olive branch in one talon and arrows in the other. In its beak, the eagle holds a banner with E Pluribus Unum on it, below 13 stars. These stars honor the original 13 colonies that came together to form the United States.

Add these Cull Silver Eagles to your cart to secure these back-dated Eagles at comparably low premiums over the silver spot price compared to their BU counterparts!